Thoracic outlet syndrome (TOS) is the combination of symptoms produced when the neurovascular structures that traverse the thoracic outlet are compressed.1 The pain and discomfort are generally due to the compression of the subclavian artery and vein, lower trunk of the brachial plexus as they pass through the thoracic outlet. There are three typical sites of compression neurovascular bundle. The lower roots of the brachial plexus may be compressed in the interscalene triangle. The second potential site of entrapment is costoclavicular triangle. The third potential site is more distal in the sub-coracoid tunnel.2 The incidence of TOS has been reported to be approximately 0.3-2% of the general population between the ages of 25 and 40 years.3 Depending on the particular structure compressed distinct terms are used, including neurogenic (nTOS) from brachial plexus compression, venous (vTOS) from subclavian vein compression, and arterial (aTOS) from subclavian artery compression.4 While the diagnosis of TOS typically rests on a careful history and physical examination, imaging plays an important role in identifying the underlying cause and supporting the diagnosis. A 30 years old female presented with right arm and scapular pain radiating to hand along with restricting muscle movements, burning sensation without any paresthesias. There was no history of surgery or trauma. Contrast enhanced CT chest revealed bilateral bony cervical ribs with pseudoarthrosis of first rib (Figure-1). 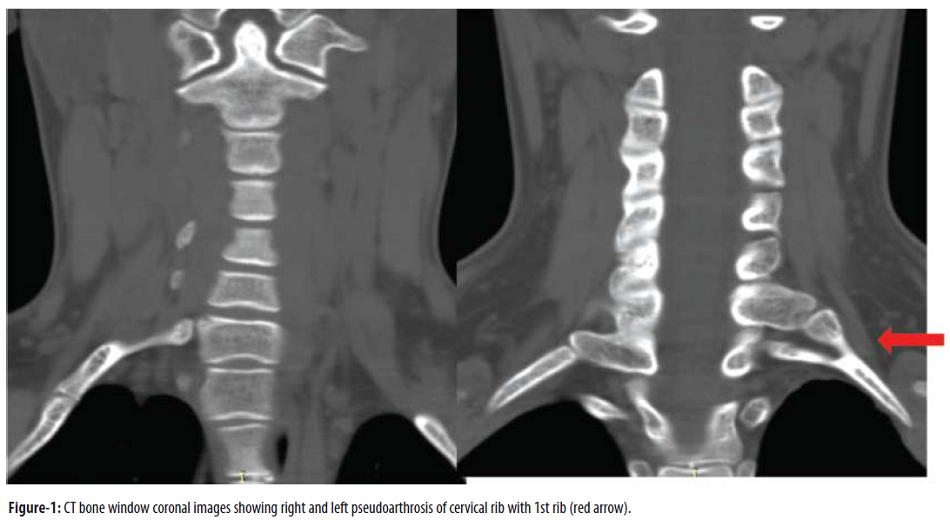 On the right there was severe narrowing of the subclavian artery (Figure-2a) between the clavicle and junction of cervical and first rib. 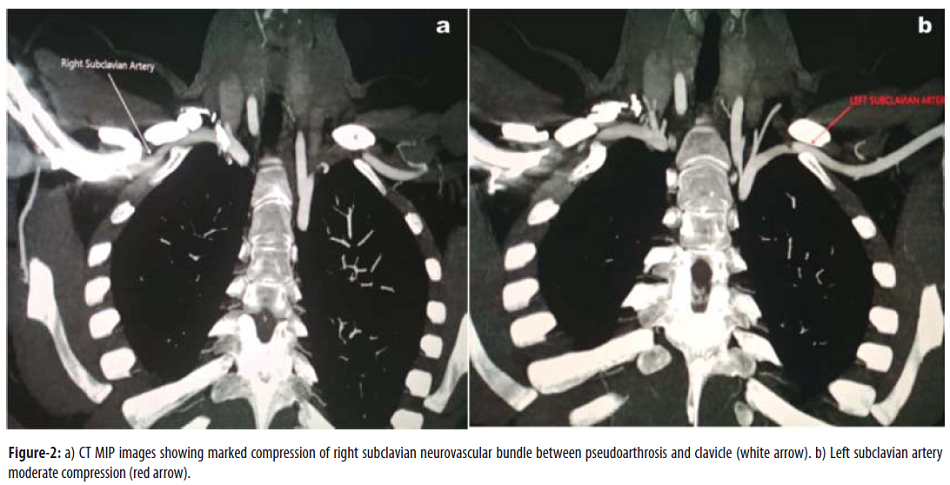 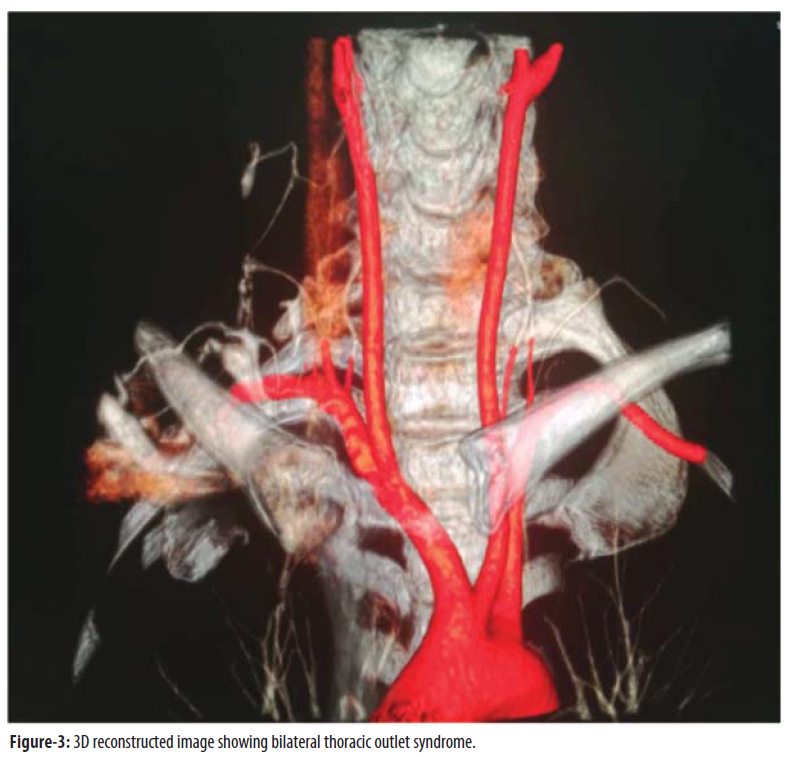 Crowding of the brachial plexus was noted. Minor changes within the left subclavian neurovascular bundle were also noted but left-sided cervical rib joined the first rib more superiorly with a more spacious gap for neurovascular bundle to exit. Patient was operated and excision of right scalenus anterior muscle was done without excision of the 1st rib. Patient again presented with similar symptoms on left side 2 years later. Imaging was performed in abducted and adducted position. In abducted position, marked compression and narrowing of the right subclavian artery and vein between a bony exostosis arising from the right first rib and the right clavicle was seen. However, compression was relieved in the adducted position. In both the abducted and adducted positions, moderate compression of the left subclavian neurovascular bundle was noted between the anterior scalenus muscle and the fused left cervical rib (Figure-2b).

The superior thoracic aperture is referred anatomically as the thoracic inlet and clinically as the thoracic outlet. The thoracic inlet is bounded by the first thoracic vertebra posteriorly, the first pair of ribs laterally, the costal cartilage of the first rib and the superior border of the manubrium anteriorly.5 Neurogenic TOS constitutes 85% to 90% cases and is characterized by compression and irritation of the brachial plexus nerve roots (C5 to T1). Venous TOS (10%-15% cases) is caused by subclavian vein compression within the costoclavicular space, resulting in the abrupt presentation thrombosis (Paget-von Schroetter syndrome). Arterial TOS (2%-5% cases), usually found in association with an anomalous cervical rib, which leads to the development of post-stenotic subclavian aneurysms. The variety of important structures in the thoracic outlet like, subclavian vessels, dorsal scapular and phrenic nerve, scalene muscles, brachial plexus, stellate ganglion, the thoracic duct and the cupola of lung contribute to the diversity of symptoms.6 Radiological investigations may aid in confirming etiology related to a cervical disc or differentiating between a vascular and neurogenic TOS. Cervical spine X-rays should be evaluated for the presence of osseous or cartilaginous abnormality. Arteriography may be indicated if an aneurysm is suspected. Venography may help in diagnosing a venous TOS. CT and MRI imaging modalities can primarily detect cervical disc disease, scalene muscle anomalies, and brachial plexus compression. They may help diagnose a Pancoast tumour or metastatic involvement of the brachial plexus.7