A cross sectional study was conducted from October 2016 to February 2017 with the aim to examine the factors affecting the quality of antenatal care (ANC) services being used in Bahawalpur district. Data was collected using the Stratified cluster sampling technique from 1,650 married women of reproductive age (15-49 years) who had given birth to at least one child in four preceding years. Information regarding socioeconomic aspects and the ANC services used during pregnancy were recorded through interviews. The quality of ANC services being used was measured through constructing an index. The results from multivariate ordered logistic regression analysis revealed that longer birth interval, gender of the eldest child (female), birth order of the child (as first or second child), number of living sons, the woman’s knowledge about complications of pregnancy, her prior history of neonatal mortality, her socioeconomic empowerment, and wealth status of her family translate into the use of quality ANC services in district Bahawalpur.

In the developing world, the quality of ANC lags behind ANC coverage. Evidence is present1 that in low income countries, 86.6% of women accessed ANC but only 53.8% reported receiving the three services (blood pressure monitoring, urine testing, and blood testing). Furthermore, the reception of the three services correlated with the per capita income status of the countries and within a country; in contrast to the poor women, the rich women were four times more likely to report good quality care. Good quality ANC is related to the prevention of potential obstetric complications, stillbirths, and new born deaths.2 It is also linked to increased likelihood mothers remaining under care and of giving birth in a health facility. It can be said that good quality ANC is related directly and indirectly to improved maternal and neonatal health outcomes.3 In Punjab, due to existing inter-regional disparities, the discrepancies regarding the utilisation of ANC services are inevitable among different regions and districts of the country. The present study is unique in the context that, for investigation, it included social, economic, demographic, and contextual realities of district Bahawalpur as predisposing and enabling factors of adequate ANC services being used.

The primary survey for the study was conducted from October 2016 to February 2017 in Bahawalpur district of Punjab. For data collection, married women of reproductive age (15-49 years) were interviewed. A stratified cluster sampling technique was adopted to make it a true representative sample. From each cluster only those households were considered where at least one married woman had given birth to at least one child in the preceding four years. In case a woman had more than one child information was recorded about the most recent live birth. The sample size was planned by using a standard formula for single population proportion.4 For data collection, based on previous studies5,6 a well-structured questionnaire was developed, which was administered through face-to-face interviews by female enumerators. The face and predictive validity of the questionnaire were assured, respectively through pertinence and pre-testing. The dependent variable was 'the quality of ANC services used', whereas the women’s personal, conjugal, familial, and residential characteristics served as the correlates of 'the quality of ANC services used'. To assess the quality of ANC being used, an additive index was constructed by recording information on the 11 components of ANC being used, i.e., measuring weight, measuring height, taking urine sample and blood sample for test, measuring haemoglobin and blood pressure, nutritional counselling, explaining the probable problems during pregnancy, advising where to go if there is a pregnancy-related complication, taking iron/folic acid tablets/syrup and tetanus toxoid injections. A response by the women was respectively recorded as 1 or 0 if she had or had-not utilised that ANC service during her pregnancy. Thus, the quality of ANC utilisation index ranged in value from 0 (the lowest) to 11 (the highest). Econometric analysis was done by applying multivariate ordered logistic regression. Amid the demographic factors, except for the age of the woman (it had shown negative but insignificant impact), birth interval, gender of the oldest child as ‘male’, and birth order of child had shown positive association with the quality of ANC being used. Amongst the socio-cultural factors, with the exception of respondent’s family system as ‘nuclear family’ (which had negative but insignificant association), woman’s own educational level, and that of her husband’s, and the number of living sons, showed positive effect on quality of ANC services being used. All the three aspects of a woman’s empowerment, i.e., freedom of movement index, domestic decision making index, and prior knowledge or experience about pregnancy complications had positive impact on quality of ANC services being used. Wealth index was used as proxy measure of socioeconomic status of the household. It positively impacts the quality of ANC. The positive associations show that women belonging to the highest segment of society are more likely to use ANC services as compared to those from the lowest segment of society. Media exposure of the woman measured by an index increases the utilisation of quality ANC. It shows that as media exposure increases the woman will enhance the utilisation of ANC services. The results have shown that involvement of men is positively linked with quality of ANC. The positive relation of involvement of men shows that more involvement of men leads to more use of ANC services. The positive relation of neonatal mortality/miscarriage shows that women who already had lost a child or had a miscarriage had more chances of utilising ANC services of a better quality. (Table) 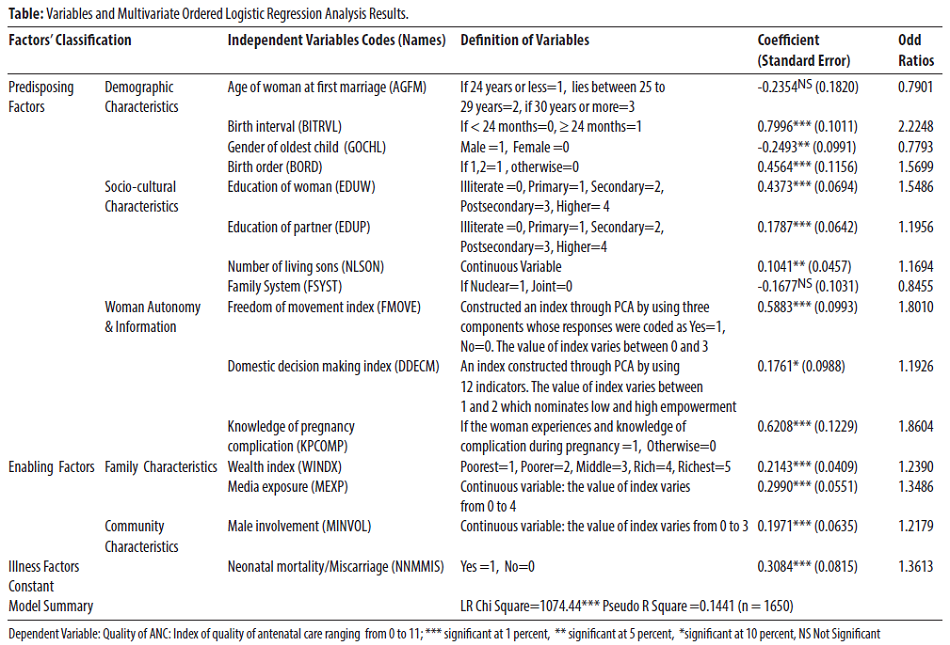 Birth interval positively affects the quality of ANC. It may be explained that longer birth intervals are related to adverse risks and hence women need better ANC in terms of greater number of visits and in terms of quality.7 In the analysis, gender of the oldest child affected the quality of ANC. That is to say that having a son can pack their desire to utilise ANC services and quality as well. Higher birth order of child was positively associated with the quality of ANC use.(8) The probability of seeking ANC with its full contents for later pregnancies could be due to increase in their confidence to get ANC services with the higher order of birth.8 However, negative association of birth order with the utilisation of ANC services is also evident.9 Respondent’s educational level positively influences the quality of ANC. This is similar with the findings of a study.10 It is because education can enhance a woman’s knowledge and cognitive abilities to access high quality services.11 Husband’s educational level positively influenced the quality of ANC being used, as women having educated partners face fewer constraints towards their mobility to health institutions.8 Number of living sons of the woman has showed positive effect on quality of ANC. It may be due to the fact that more boys as compared to girls in the household represent that the household’s demand for a son is satisfied. Now the woman demands less use of ANC services. Women’s freedom of movement and decision-making ability in domestic issues, both were found positively associated with ANC services being used. The interpretation of this may be that empowerment makes the woman economically stronger and leads to higher use of ANC services.12 The results have shown that prior knowledge about pregnancy complications has positive impact on quality of ANC. It may be explained as the knowledge or experience of previous pregnancy complications makes the woman more susceptible to use ANC services.6 Wealth index positively affects the quality of ANC. The positive associations show that women belonging to highest segment of society are more likely to use ANC services as compared to those belonging to the lowest segment of society. The explanation of this may be that rich women have more access to healthcare services as they are more educated and have more access to media as well. The results coincide with a previous study.9 A woman’s exposure to media also increases health education as well as awareness about the full contents of ANC services.8 The results have shown that male involvement is positively linked with quality of ANC. It may be because of the fact that husband’s support makes the woman more confident to move outside the home and to use ANC services.13

Empirical evidences that emerged from this study have many implications for the use of better quality ANC services in a predominantly rural context of Bahawalpur. Through socioeconomic uplift, women empowerment, and behavioural changes in the traditional mind-set of the communities optimal and better quality use of ANC services could be achieved.

9. Habibov NN. On the socio-economic determinants of antenatal care utilisation in Azerbaijan: evidence and policy implications for reforms. Health Economics, Policy and Law 2011; 6: 175-203.

12. Yesuf EA, Calderon-Margalit R. Disparities in the use of antenatal care service in Ethiopia over a period of fifteen years. BMC Pregnancy and Childbirth 2013; 13: 131.

Antimicrobial Stewardship — Do we need it in Pakistan?

Who are the women wishing to opt for contraception?