Who are the women wishing to opt for contraception?

This descriptive cross-sectional research study was conducted to determine the characteristics of the women who intend to use a modern family planning method. For this 154 women were selected in a small village and faceto- face interviews were conducted. The findings indicate that 86 (56%) women intended to use a contraceptive method. The regression model showed that women who had the knowledge about different methods, those who had previously ever used family planning method and those who had never used any traditional method are more likely to adopt modern contraceptive methods.

According to the World Health Organisation, there are 214 million women of reproductive age in developing countries who want to avoid pregnancy but are not using a modern contraceptive method.1 Contraceptive methods are classified as modern or traditional. Modern methods include female sterilisation, intrauterine contraceptive device (IUD), implants, injectable, the pill, condoms, and lactation amenorrhoea method (LAM). Methods such as rhythm, withdrawal, and folk methods are grouped as traditional.2 For this research, modern methods refer to condoms, oral contraceptive pills, injections, implants, intrauterine device and tubal ligation. In Pakistan, there are an estimated 31 million married women of reproductive age (MWRA), out of which 35.4 percent are using contraceptive methods, with 26.1 percent using modern contraceptives and 9.3 percent are on traditional methods. A further 20.1 percent women, have or have never used contraceptives in the past and are living with unmet FP need.3 Among the modern methods, female sterilisation/tubal ligation is the most common method — around 45% of the modern methods — and is often chosen late, i.e. after 31.5 years of age, and usually after four or more children. The short-term methods, such as condoms, accounted for around 23%.4 The optimal use of modern contraceptive methods can help prevent unintended pregnancies and induced abortions in low- and middle-income countries (LMICs), and will directly contribute to improved maternal and child health outcomes.5 Family planning also has the potential to reduce poverty worldwide by improving educational and economic outcomes for women.6 According to a study that applies to about one-third of the world's population, 15 million out of 16.7 million unwanted pregnancies a year could be avoided in 35 low- and middle-income countries if women had the opportunity to use modern methods of contraception.7 According to the latest Pakistan Demographic and Health Survey (PDHS), contraceptive prevalence rate (CPR) has not significantly increased for the last decade; the current rate is 34% in PDHS 2017-18 and was 35% in PDHS 2012-13.2 Limited research has been conducted in Pakistan to explore the characteristics of the women who are willing to use any family planning method in the future. Therefore, this study aimed at identifying the characteristics of the woman who are willing to adopt a modern method.

This cross-sectional, descriptive study was conducted from March 2018 to May 2018. Data was collected from a small rural village near Lahore. The sample size was calculated using Slovin’s formula8 n = N/(1+Ne2) at a confidence level of 95%. N is the population and was taken as 250 — an estimated MWRA living in the village. A nonprobability convenient sampling technique was used. A total of 154 women were selected, and the participants were interviewed, following written informed consent. Ethical approval was sought from the ethical committee of Department of Public Health, Hazara University, Pakistan. The selection criteria included married women of reproductive age group (18-49 years) and who were resident of the village. A self-administered questionnaire was adapted for data collection. The questionnaire consisted of two sections; section one inquired about the socio-demographic characteristic of the women, while section two related to knowledge, attitude, and practices towards family planning and intention to adopt a method. The mean age of the participants was 26±6 years with majority, i.e. 104 (67%), having no formal education and were housewives. Majority 124 (80%) had more than two children out of which 95 (62%) women had no further desire for more children. (Table 1). 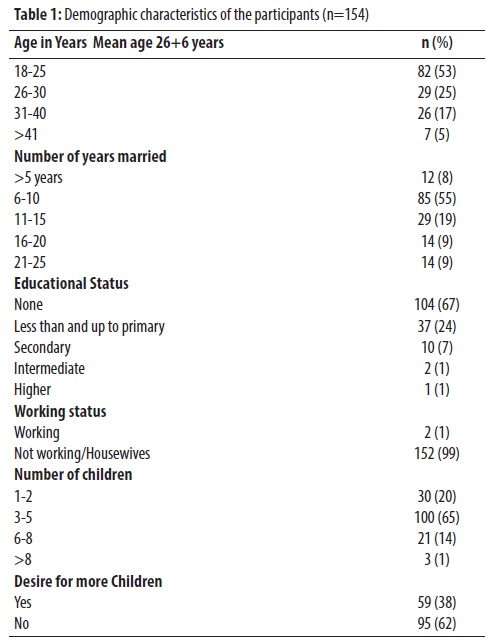 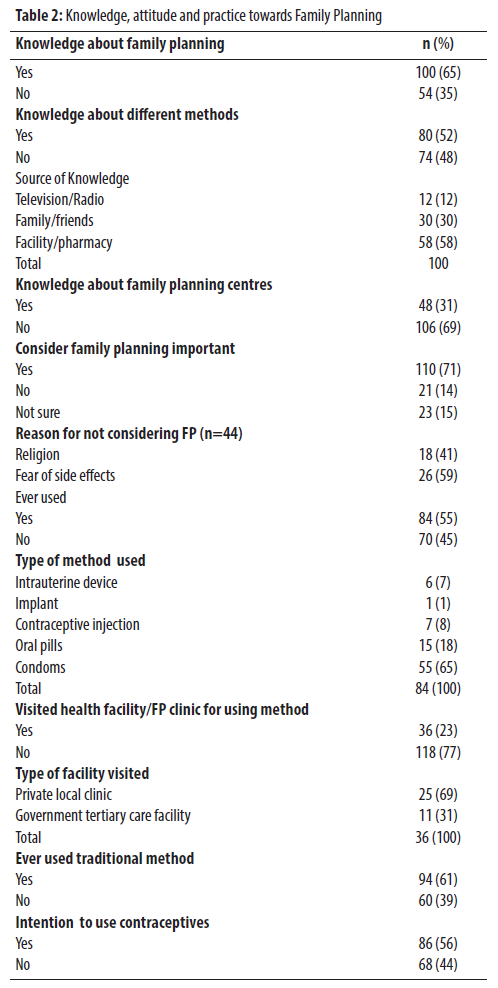 (Table 2) The main outcome of this study was the intention of the women to adopt/use a modern method. Chi-square test was run to study the association of various characteristics with outcome variable. Significant association was found between intention to use or adopt a modern method with sociodemographic characteristic of the women (p<0.05). Similarly, significant association was found between knowledge of family planning, knowledge of methods, having used in the past, number of children and intention to use any method with a p-value <0.05 (Table 3). 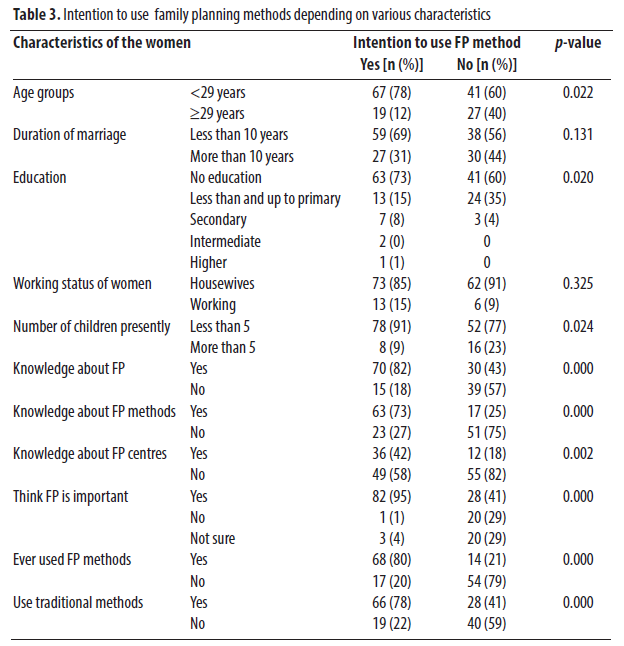 Multivariate logistic regression analysis was conducted to identify associated factors for intention to use a modern method with the approach of parsimonious model building and screening criteria of pvalue <0.20 at the univariate level and <0.05 at the multivariate level. The model preparation was subjected to Hosmer and Lemeshow goodness of fit test. The final derived multivariate model was found to be good fit (p<0.76). It was revealed that the women who were formally educated (primary or more) were 0.36 times less likely to use any method compared to those without any formal education; this was statistically significant with a p-value of 0.04. Women who had knowledge about family planning methods were 2.98 times more likely to adopt a method compared to those who had no knowledge about different methods (p=0.05). Similarly, women who were not sure that family planning is beneficial were 0.17 times less likely to adopt it. However, those women who had ever used family planning were 3.34 times more likely to use or had the intention to adopt a method compared to nonusers. Similarly, those women who have been using traditional methods were 0.26 times less likely to adopt any method (p=0.00). From the above it may be derived that women with knowledge about different methods, who had previously ever used a family planning method and non-user of traditional methods are more likely to adopt contraceptive methods. (Table 4) 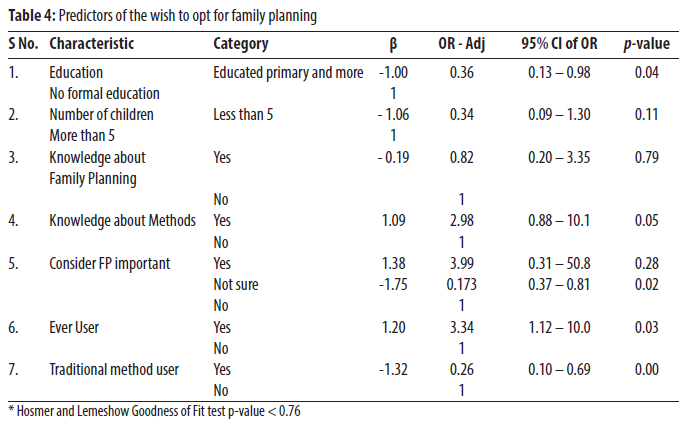 The results of our study show that only 84 (55%) women were using contraceptives and the most common method reported was condoms, whereas 65 (55%)were on pills. Longterm methods such as IUCDs and implants were the least common methods used. These findings are similar to overall findings related to Pakistan which shows very little use of long-acting reversible contraceptive methods, while shortterm and permanent methods have greater utilisation.4 Another study carried out by Pakistan Bureau of Statistics also reports condoms as the most common method adopted in Pakistan.2,9,10 However, 61% of the women also reported using traditional methods. These are similar to the findings where the use of traditional methods was one of the major contributors among the use of mixed methods.7 In this study, it was found that women having knowledge about family planning methods were 2.98 times more likely to adopt family planning as compared to those who had no knowledge about different methods. This study also indicates that majority of the women buy their contraceptives from a pharmacy instead of consulting a healthcare provider. These findings are similar to another study11 which indicates that women tend to buy their supplies from pharmacies and are therefore, not counselled on the correct use of contraceptives and do not have the recourse when they experience side effects. In our study, one of the main reasons for not using family planning was fear of side effects reported by 26 out of 44 women who did not consider family planning important. Fears about the side effects are well-documented barriers 10 and this may improve if women are asked to consult a healthcare provider for use of any method.

From this research we can conclude that women who intend to use a modern method are those who are past users, do not rely on traditional methods and have knowledge about various family planning methods. Therefore, increasing knowledge about various methods and adding new users will support in improving the overall contraceptive prevalence rate. One of the key limitation of this study was that it was carried out in a small rural district with a limited sample size, and therefore the findings of this study cannot be generalised.

Antimicrobial Stewardship — Do we need it in Pakistan?