Task-oriented training and exer-gaming for improving mobility after stroke: A randomized trial

Objective: To evaluate the effects of task-oriented training and to compare it with virtual reality training on the mobility, physical performance and balance in stroke patients.

Method: The randomised controlled trial was conducted from January 2016 to March 2017 at the Physical Rehabilitation Department of Pakistan Railways General Hospital, Rawalpindi, Pakistan, and comprised patients 40-70 years with stroke history of at least 3 months who had the ability to stand unaided. The subjects were randomised into virtual reality training group A and task-oriented training group B. Task oriented training was provided for 3 days per week over 8 weeks to both groups with each session lasting 40-45 minutes, while additional 15-20 minutes of exer-gaming was provided only to group A. Fugl-Meyer Assessment-Lower Extremity, Berg Balance Test, Timed Up and Go Test and Dynamic Gait Index were used for assessment which was done at baseline, and at 2, 4, 6 and 8 weeks of training. Data was analysed using SPSS 21.

Results: Of the 52 subjects, there were 26(50%) in each of the two groups. The overall sample had 36(69.2%) males and 16(30.7%) females. Group A showed significant difference in Fugl-Meyer Assessment-Lower Extremity and Berg Balance Test scores at 04 weeks of training compared to group B (p<0.05). Timed Up and Go Test significantly improved in group A at 6 weeks (p<0.05). Both groups showed significant improvement in Dynamic Gait Index after 8 weeks of training (p>0.05).

Around 15 million people develop stroke worldwide per year and it is the most common cause of physical disability globally which can lead to impaired balance, gait and mobility. The disability ratio is almost equal in both the developing and the developed world.1 Middle-aged population of Asian countries, including Pakistan, India and China, have a risk for developing stroke five times higher compared to the western countries.2,3 Half of the stroke surviors have some sort of physical disability and balance impairments which are linkned with restricted partcipation towards community.4,5 The level of disability also determines the working and earning capacity of stroke survivors. The disability reduces the quality of life and, hence, the societal role of the individual. The lack of participation in community put a great economic and social burden on society.6,7

Stroke results in a number of deficits, including balance impairments, upper-limb dysfunction, lower-limb strength, and mobility and gait dysfunction.8,9 Several rehabilitation approaches are applied for the recovery of stroke patients, including the Bobath approach,11 circuit training,12 Constraint Induced Movement Therapy (CIMT)13 and Task-Oriented Training (TOT),14 which is reported to  achieve significantly good outcome of  the motor control and specific task-related performance with activities of daily life.15 The missing part of TOT is the repetition of the task with active involvement of stroke patients. The main barrier or limitation in TOT is the repetition of tasks in an appropriate manner, and most patient lose interest and feel bored during the performance of similar tasks.16

Virtual reality training (VRT) through Xbox Kinect is considered a useful option to improve the balance, gait and functional outcome with active engagement through video games.17,18 The exer-gaming has the potential to utilise the whole body movement, speed variation, multiple directions, repetitive and particular movements to improve balance after stroke.19

Virtual reality (VR) technology provides a good framework to engage the patients in purposeful activities without personal assistance of a therapist, and also to motivate them in achieving the desired goals. VRT has significant contribution towards achieving not only the physical function, but also enhances the motivational level of stroke patients.20 The current study was planned to determine and compare the effects of TOT and VRT on the mobility, physical performance and balance in stroke patients.

The randomised controlled trial was conducted from January 2016 to March 2017 at the Physical Rehabilitation Department of Pakistan Railways General Hospital, Rawalpindi, Pakistan. The RCT was registered in Iranian register of clinical trial with number 35010.

After approval from the ethics review committee of Riphah College of Rehabilitation Sciences, Islamabad, a pilot study was conducted for sample size calculation. The sample was raised through purposive sampling. Those included were stroke patients aged 40-70 years, stroke history 3-6 months with the ability to stand and move their arms. Those excluded were patients having cognitive impairments, with severe spasticity and other pathologies. Those with stroke history of >6 months were excluded as in 9-12 months patients present a different picture and have a less chance of neural plasticity. After taking written informed consent from the patients, they were randomly divided using sealed envelope technique into two equal VRT and TOT groups.

TOT included the sitting balance activities, sit-to-stand, standing balance, side and high stepping, marked gait training etc. were used for training. Each session lasted 40-45 minutes provided to both the groups for 3 days per week over 8 weeks, while an additional 15-20-minute sessions were provided for VRT group (Table-1).

The assessor was blinded to the training groups. There were two experienced, certified therapists with post-graduate qualifications. The third therapist with matching professional characteristics in neurology was the blind assessor.

Descriptive data regarding age, gender, type of stroke, hemiplegic side, site of lesion, duration of stroke and co-morbidities was recorded on a predesigned proforma, and was analysed using SPSS 21. The test of normality was applied to all variables to assess data distribution. The P value of Shapiro Wilk test for all variables was >0.05, meaning parametric tests had to be used to measure the differences. Repeated measures analysis of variance (RM-ANOVA) was applied to measure the overall difference from the baseline to the 8th week in both groups. Post-hoc Bonferroni test was applied to assess the difference across various follow-up markers in both the groups. Independent samples t-test was applied to see inter-group differences at baseline, during and after training. Alpha level of significance was set at 0.05. 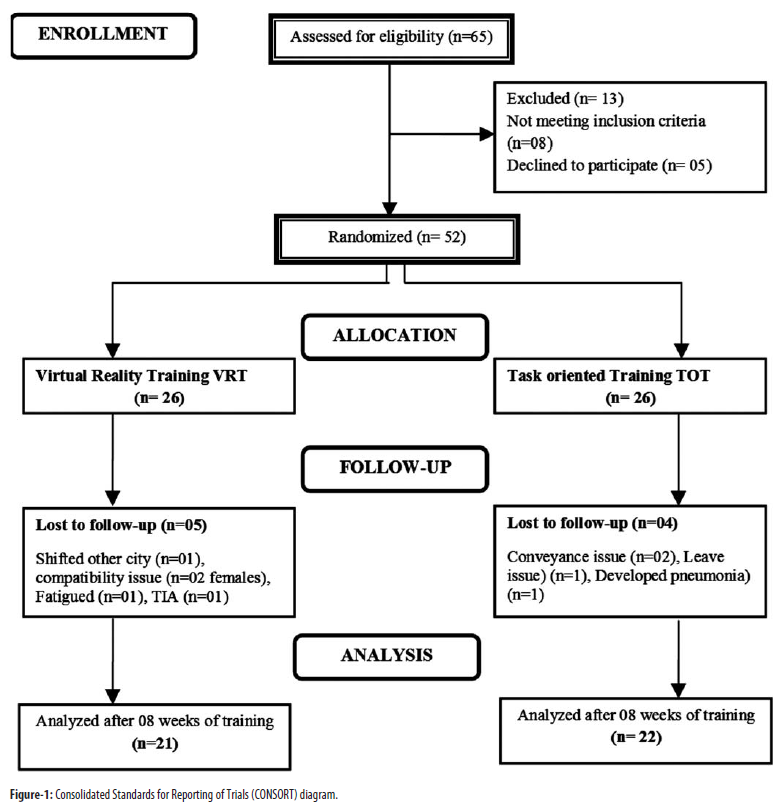 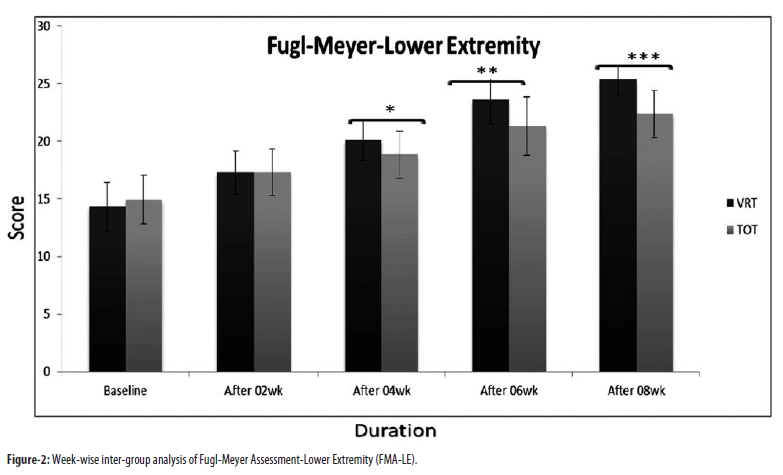 There was no significant difference between the groups in gait performance although both groups showed improvement over the 8 weeks of intervention (Table-2). 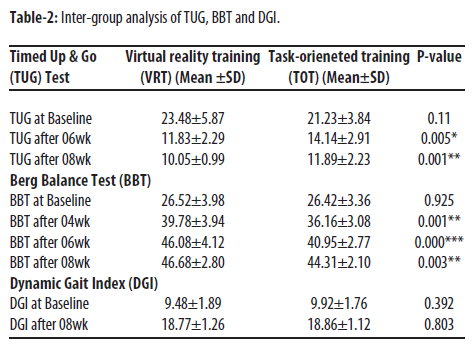 The current study showed that after 4 weeks there was a significant difference in FMA-LE score between the groups, and VRT group showed greater improvement compared to the TOT group which in itself also displayed significant improvement. A clinical trial on 5 stroke patients also stated that FMA-LE had significant improvement in VRT group.21 It proposed the underlying mechanism of improvement in lower limb performance and functional strength involved cortical re-organisation and synaptic flow within brain after training. Four-week training for 4-5 days per week and 60-minute sessions were provided and VRT was recommended for producing neural plasticity.22 Significant improvements were also observed in both groups after training up to 6-8 weeks, but VRT group showed better outcome compared to TOT group. Past systematic review supports the effectiveness of TOT in improving physical function of stroke survivors. It has been reported that functional task activities, balance and locomotion training needed task and context-specific activities for optimal results. It was concluded that TOT was more effective in improving physical function status and global strength in stroke patients compared to general exercises.23

The current study also intended to evaluate the mobility level of stroke patients before and after rehabilitation in both the groups. After 6 weeks of training, the analysis showed that there was significant difference between the groups, and VRT group took shorter time to complete TUG compared to the TOT group. Similar finding was reported earlier.24 Another study was conducted to assess VRT effectiveness on 59 stroke patients and daily sessions were provided for 3 weeks. Difference was noted as the groups achieved the desired goal post-intervention. The study provided games which were easily performed in the sitting position, and the standing balance was not addressed in the control group, while in the intervention group the games challenged the standing balance.25

In the current study, significant difference was observed between the groups after 4 weeks regarding balance, with VRT group performing significantly better. Another study reported significant improvement in BBT score in VRT as compared to TOT group.26

The current results showed there was no difference between the groups and both types of training had similar and significant effect on gait performance. This can be probably due to the games' selection and the short duration of practice in VR environment. A study reported significant improvement in gait after VRT, using treadmill-intensive training with VR to enhance the skills and performance of gait. A study on 18 stroke patients found VRT group with improved gait compared to its non-VR group. The results are contradictory to the current study but there is measurement difference in the two studies, as the earlier one measured ankle kinematics and kinetics during push-off phase of stance in stroke patients.27

The comparison between types of stroke was not considered due to unequal type-specific sample size. Also, long-term effect was not assessed which is one of the limitations. Future studies should include these two elements.

VRT when combined with TOT resulted in better outcomes in stroke patients compared to TOT alone. Six weeks of combination training was sufficient to achieve optimal functional status after stroke. Addition of VRT did not cause significant change in gait performance though.

2.      Mackay, Judith, and George A. Mensah. The atlas of heart disease and stroke. World Health Organization, 2004.

26.    Mirelman A, Bonato P, Deutsch JE. Effects of training with a robot-virtual reality system compared with a robot alone on the gait of individuals after stroke. Stroke. 2009;40:169-74.