Objective: The study objective was to estimate trachoma prevalence in relation to seasonal variation among children.

Methods: Study Design was cross sectional and data was collected during all seasons of the year. After randomization of population units, 10% of them were identified by lottery and 5% of them were selected and examined for active trachoma case detection by simple random sampling technique. Total number of study participants were nine thousand seven hundred and ten (n=9710) from both urban and rural population units. The study was conducted during January -December 2018 during all three seasons of the year. After clinical examination, data was entered into a questionnaire Performa, which was used as tool for data collection. A Chi-square test was applied to compare trachoma cases among different seasons and among both boys and girls.

Results: Maximum burden of disease (62.4%) was reported during spring and winter season. Both spring and winter seasons have six months duration. During summer season, 70(37.6%) cases were reported. A highly significant (<0.01) relationship was reported between summer and spring seasons and trachoma prevalence (p < 0.01). A high prevalence was noted among female children.

Trachoma is a treatable cause of blindness, being an eye disorder caused by Chlamydia trachomatis. Disease transmission is by direct contact with nasal or eye discharge of infected person.1 According to WHO (2017), still 41 countries of world are endemic for trachoma and need interventional strategy. Maximum disease burden is reported from Sub-Saharan African countries. Globally, intervention is needed for 90% of population from endemic areas.2 Trachoma is a leading cause of visual impairment affecting 104 million people annually; 0.45 million of them have irreversible blindness.3 Trachoma causes significant morbidity and mortality among poor nations of the world, which are mainly affected. Trachoma also halts social and economic development of a community. High prevalence of active trachoma among children under 10 years of age exceeds 25% in most regions of Mali. Prevalence of active trachoma was 34.9% in Bamako region and in Kayes region was 42.5% among children, while trichiasis was repeated among 3.3% adult female of Mali.4

WHO has been launching a massive campaign for Global Elimination of Trachoma by 2020 (GET 2020) for the last 23 years. WHO has recommended SAFE strategy for endemic regions to achieve target of trachoma elimination by 2020. The SAFE strategy has four components i.e. "S" stands for surgery to correct trichiasis to preserve Vision, "A" is mass Antibiotic treatment like Azithromycin/ Tetracycline eye ointment "F" Facial cleanliness to minimize eye infection and nasal discharge, "E" is environmental development for household access to clean water and latrine for improving hygienic status.5

WHO (2013)6 reported that currently four districts of Cambodia are endemic for active trachoma, two of which are hyper-endemic, having Trachoma prevalence of 47%. In these areas, mostly children are affected. WHO reported very good hygienic status of children of Islamic Republic of Iran. At Primary School, Children are screened every month for Trachoma and other eye diseases. A hygienic kit has been provided by the Government of Iran to every child having soap, hand kerchief and tooth brush. In 2012, school aged children were examined in a province during survey, only 60 suspected cases were detected but later on PCR testing of them was found negative. India is going to be a trachoma free country. Experts recommended rapid assessment should be in 15 districts and prevalence study in 10 districts over next year.  Shandong and Shaun provinces of China need rapid trachoma assessment, because there is high degree of poverty. China, Ministry of Health has emphasized for elimination of Trachoma in coming years6.

Bamani et al (2010) reported criteria for implementation of mass drug administration (MDA) for a region that has active trachoma prevalence of > 10% among children age 1-9 years7. WHO issued a new standard operating procedure in 2014 after consultation with technical advisory group on neglected tropical disease (NTD) for surveillance of trachoma that F & E components of SAFE strategy should continue as well as additional coverage of MDA in districts having active trachoma prevalence of 5-9% and it is 9% among children of age 1-9 years.8

This study was conducted in a remote district of Punjab during all seasons (three) of the year. The Study objectives were to assess the prevalence of active trachoma among children of Dera Ghazi Khan, sex wise burden of disease and to provide health education about trachoma to the community.

This is a Cross sectional study conducted by department of Physiology, Dera Ghazi Khan Medical College, Dera Ghazi (DG) Khan in collaboration with regional center of Aids to Leprosy Patients (ALP) during 2018 in district Dera Ghazi Khan. Simple random sampling technique was applied. Subjects having 1-15 months of age who were seriously ill were excluded from the study. The study protocol was approved the Ethical Review Board of the DGKMC Dera Ghazi Khan. The written informed consents were taken from subjects or their parents. Identity of subjects and their parents was kept confidential. An antibiotic eye ointment was given to subjects suffering from active trachoma. Subjects having trachoma were treated at teaching hospital D.G. Khan. All subjects were given heath education regarding trachoma and personal hygiene. Research protocol was approved by institutional Ethical committee of DG Khan Medical College, Dera Ghazi Khan.

Data collection was conducted by four-member health professional team. Two members team interviewed subjects and family head and two experts examined the subjects for detection of trachoma. One medical expert examined one child and the other medical expert examined the other child. Four members health professional team was deputed for better time management. At the end of the day, data collection forms were rechecked by Principal investigator and feedback was given to team members. Data collection tool was a questionnaire consisting of family information, income, educational status, availability of safe water and face washing practices by subjects and second data collection tool was a Performa for clinical examination of subjects.

The general physical examination was followed by special Eye examination.

The total population of district Dera Ghazi Khan was 2.872 Million (2018).9 Urban and rural units were randomized; ten out of 50 units, fifteen out of 150 population units (rural) were selected by lottery method. From each identified population unit, 5% of population was targeted for new case detection of trachoma by simple random sampling technique. A day before surveillance, every selected unit was informed by loud speaker 3times a day. The study sample size was nine thousands, seven hundred and Sixteen (n= 9716) for case detection of active trachoma. Independent variables were age, sex, season and frequency of face washing etc. Data was analyzed by using SPSS version 18.0. Prevalence of active trachoma in different three seasons of year was calculated.

Active trachoma symptoms and signs are ocular swelling ocular pain, itching or swelling of eyelid, eye discharge, photophobia and trichiasis. In a subject, presence of these signs and symptoms were labeled as case detected. 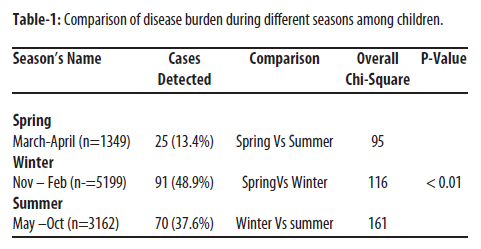 Total number of boys enrolled in this study were five thousands five hundred and fifty (n=5550), and ninety-five new cases were detected. While girls were four thousands one hundred and sixty-one (n=4160) and ninety-one new cases were detected. Chi-square was applied for analysis of trachoma cases between both boys and girls, overall Chi-square was 186 and results shown were highly significant statistically P < 0.01 (Table-2).

WHO and department of neglected tropical disease (NTD) collaborating closely in trachoma control for prevention of blindness. WHO recommended five public health strategies for prevention and control of NTD. Major Challenges are lack of safe water supply, inaccessibility to certain areas, long distances, surgical refusal and public attitude towards control programs. In Pakistan, 0.81 Million people are suffering from active trachoma with a high prevalence of 96.6%-  in Upper Sindh and 48.9%- among female children. Such challenges could be addressed by proper planning and implementation of control activities.7,8

Traore et al reported trachoma prevalence from four districts of Mali, eight years after MDA with Azithromycin among children of 1-9 years. All four districts have achieved active trachoma elimination threshold < 5%. Boys have less prevalence of active trachoma than girls, however, boys versus girls trachoma prevalence was non-significant statistically. This study findings regarding high prevalence among girls is in accordance with Traore et al with statically significant results (p< 0.01). This study results has shown high number of case detection during winter season, however, prevalence is lower than summer, nonetheless, Troare et al has not reported seasonal prevalence.10

Ramesh et al reported that potential role of climate on trachoma prevalence is limited, despite of many evidences i.e. seasonal changes play a major role in disease transmission, which might depend on rain fall and flies population. Our study findings are in accordance with Ramesh et al regarding effect of season on trachoma transmission as more number of cases were reported during winter season.12

Last et al reported trachoma prevalence of 22% among children of age 1-9 years in Bijagos Archipelago, a remote island at Guinea Bissau. Environment of island was hot and humid, significant rainfall was reported during summer months. Current study findings are contrary to Last et al regarding prevalence of trachoma and area of study having four seasons in a year. Our study finding regarding high prevalence among females was in accordance with Last et al and was significant statistically (< 0.01).14

Taye et al reported seasonal and altitudinal variations in fly density and their association with occurrence of trachoma in Gurage zone of central Ethiopia. A strong association was reported between number of flies caught per child, altitudinal trends and prevalence of active trachoma among children age 1-10 years (p < 0.001). Low village trachoma prevalence (81.6%), mid villages (78.7%), high villages (1.7%) were reported respectively. Trachoma was a public health problem only at low and mid altitude villages, while villages at >3000 m shown dearth of flies and trachoma cases.18 Our study findings that more cases of trachoma reported during spring and winter seasons than summer are in accordance with Taye et al.

The cross sectional design of this study has limitations regarding vector, season and disease prevalence. Multiple risk factors of trachoma are difficult to define despite significant association shown in this study statistically. Screening of trachoma could be prioritized during winter& spring due to heavy disease burden reported. Trachoma screening and MDA during winter and season might decrease the base or depot load of active trachoma among children and that might be a preventive measure to reduce infection during summer.

Higher prevalence of active trachoma was noted during summer season. Face washing practices with clean water needs to be promoted among children and duty doctors might be sensitized to focus screening program for trachoma during summer and winter seasons.

Funding Source: None to declare.

Task-oriented training and exer-gaming for improving mobility after stroke: A randomized trial