Objective:  To assess the relative efficacy of flaxseed and fish oils in the management of rheumatoid arthritis.

Methods: The comparative study was conducted in the outpatient department of Rheumatology at Fatima Memorial Hospital, Shadman, Lahore, Pakistan, from July to December 2017, and comprised rheumatoid arthritis patients who were divided into group A receiving 3g/day of flaxseed oil and group B receiving 3g/day of fish oil for 90 days. Blood samples were taken at baseline and post-intervention to note the difference on biochemical parameters. Data was analysed using SPSS 21.

Results: Of the 60 patients, there were 30(50%) in each of the two groups. Overall, there were 8(13.3%) males and 52(86.7%) females. Both groups showed significant change in all biochemical parameters compared to baseline values (p<0.05). Intergroup comparison showed that flaxseed oil treatment was significantly more effective than fish oil treatment (p<0.05).

Conclusion: While both forms of intervention were found to be effective, flaxseed oil was significantly more effective

The term rheumatoid arthritis, (RA) is defined as an autoimmune ailment categorised by infection of the synovial joints in the body.1,2 RA has a mean occurrence of 0.5±0.2% and the majority of patients happen to be females.  RA indicates the most mutual chronic systemic autoimmune rheumatism.3 RA was more common in northern England and the incidence noted was similar to that in citizens of Pakistani origin living in England. However, the origin of such gender-oriented insight regarding RA is yet not known.4-7 RA causes a person’s immune system to mistakenly attack healthy tissue. When left untreated, RA can have wide-ranging effects. Along with the joints, RA can affect many of the body’s organs, including heart, eyes, brain and the skeleton. Medication for RA can also cause side-effects across the body.8

The omega-3 polyunsaturated fatty acid (Ω-3 PUFA). particularly the n-3 abundant unsaturated fatty acid (FA), docosahexaenoic acid (DHA) (22:6 n-3) and eicosapentaenoic acid (EPA) (20:5 n-3) have several health benefits, but the role in human subjects is not very clear since few studies have been conducted on the subject.9  Linum usitatissimmum, commonly called ‘flaxseed’, ‘Jawas’, ‘Aksebija’ and ‘Alsi ke Beej’ in Hindi and Urdu languages, is a blue flowering ‘rabi’ crop and a member of linaceae. Among all lipids present in flaxseed (around 30%), 17% are linoleic acids (LAs), 53% are α-linolenic acids (ALAs), 19.5% oleic acids, 2.5% stearic acids and 5% palmitic acids, which supplied excellent n-6: n-3 fatty acid proportion of around 0.3:1. Thus, the seed may be an option for providing this fatty acid to populations in parts of the world where there is no great consumption of sea-food which is the best source of n-3 fatty acids.10,11  There are variety of healthy nutrients, such as lignin, fibre and essential fatty acids, present in linseed. Most individuals are not aware of the possible health benefits of flaxseed. The overall recommendation for consumption has been 1-3 tablespoons per day of ground flaxseed or one tablespoon of linseed oil. Flaxseed is going to be one of the functional and nutritive elements in food crops as scientific outcomes have favoured flaxseed intake.12

Fish oil is also a good source of long-string Ω-3 PUFAs containing 18% EPA and 12% DHA derived from marine fish. The consumption of Ω-3 PUFAs at dosages of 2.7g/day for three months reduced nonsteroidal anti-inflammatory drugs (NSAIDs) intake by RA patients.13  Oily fish and fish oil supplements contain the long-chain (LC) Ω-3 PUFAs EPA and DHA.14  A few studies have found that fish oil at a minimum of 3g per day considerably reduced morning stiffness and also the number of tenders, swollen joints in patients with autoimmune diseases, while one study used a dose of 18g per day.15  Effects of ﬂaxseed on inferior chronic inﬂammation are still conﬂicting. A study showed that inﬂammatory markers as well as the C-reactive protein (CRP) levels were reduced with the intake of ﬂaxseed and its bioactive compounds.10

The current study was planned to assess the relative efficacy of flaxseed and fish oils in RA management.

The comparative study was conducted in the outpatient department (OPD) of Rheumatology at Fatima Memorial Hospital, Shadman, Lahore, Pakistan, from July to December 2017. The total sample size in this study had been calculated keeping in view following facts as described in literature:16

So the sample size was;

After approval from the institutional ethics review board, the sample of sixty (60) subjects was collected using simple random sampling technique from among patients of either gender aged 34-69 years with RA according to the American College of Rheumatology (ACR) criteria.17  The subjects had uncontrolled RA and were taking medications. Those having any other chronic illness, like diabetes, renal failure, liver disease and cancer, as well as patients undergone any surgery, having advanced RA stage, and allergic to medication were excluded. After taking written informed consent from the subjects, they were separated into group A receiving 3g of flaxseed oil capsule per day orally for 90 days, and group B receiving 3g fish oil capsule per day orally for 90 days.

All participants went through baseline nutritional assessment with the help of standard methods.18  These included height and weight measurements to estimate the body mass index (BMI). As per the World Health Organisation (WHO) South Asian criteria, subjects <18.5kg/m2 BMI were considered underweight, 18.5-22.9kg/m2 normal weight, 23-24.9 kg/m2 overweight and ≥25 kg/m2 obesity.19

c 311 analyzer (Roche, Mannhaim, Germany). The original kits provided by the manufacturer were used for all analysis.

The Disease Activity Score comprising 28 joints (DAS28) was applied to assess the number of swollen and tender joint numbers, while the patients’ inclusive evaluation of health was assessed using the visual analogue scale (VAS) as described previously in literature.20  DAS28 score ranges from 0 to 10 points, with 2.6 to 3.2 indicating low disease activity, 3.2 to ≤5.1 moderate and >5.1 high disease activity. VAS had a range of 0-100.

Of the 80 individuals approached, 8(10%) refused to participate, while 12(15%) were excluded in the first month of intervention because of gastrointestinal (GI) complaints and indigestion. The final sample, as such, comprised 60(75%); 30(50%) in each of the two groups (Figure). 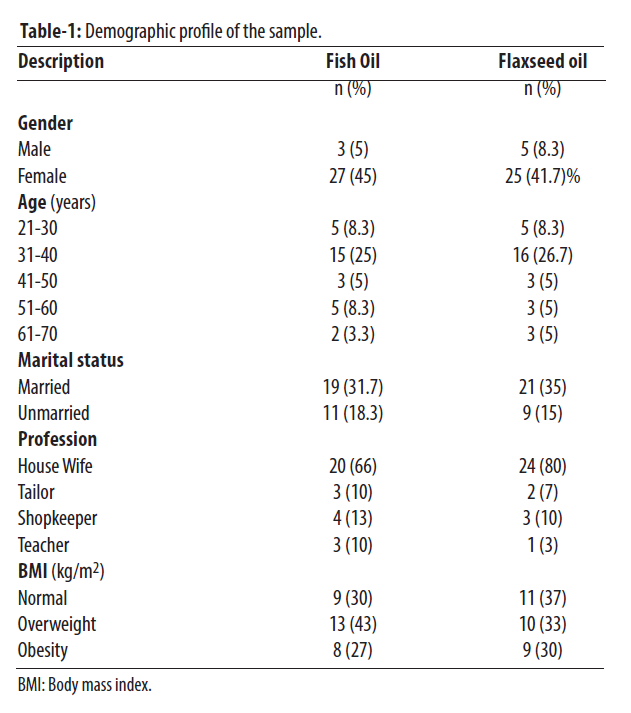 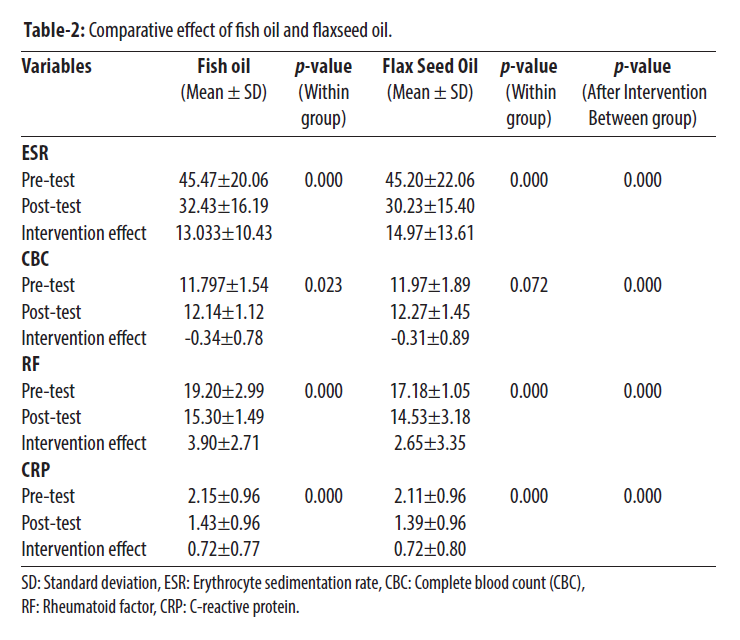 Overall, there were 8(13.3%) males and 52(86.7%) females. Age, marital status, profession and BMI values were also noted, and RA was found to be more prevalent in the female married population (Table-1).

Inflammation is intricate in the pathophysiology of many long-lasting ailments, such as rheumatoid arthritis and neurodegenerative diseases.21  The current study was planned to estimate the relative effect of flaxseed oil and fish oil in adults with uncontrolled RA. Several studies have discovered that EPA and DHA comparatively hinder some inflammatory progressions and, as a consequence, they might be helpful in provocative conditions, for example, rheumatoid joint pain.22  The present study found that RA was more prevalent among females compared to males. Among the RA patients, there was a high frequency of co-morbidities and risk factors. The age range of subjects in the current study was 21-70 years, while an earlier study had mentioned 22-65 years.23  The subjects in the current study were treated with Ω-3 FA sources. The suggestive benefit of fish oil in RA is well proven.24  It was observed in a study that fish oil supplementation reduced inflammatory symptoms in chronic RA.25  The influence of Ω-3 fish oil capsule, on CRP as an inflammatory indicator, was also investigated in the current study, and the results indicated a major decrease in CRP levels after therapy with Ω-3 FAs. These findings were in line with earlier findings.26  The ESR levels were considerably decreased in our patients compared to the baseline value, and the finding was in line with earlier studies.27  One study reported uncertain but substantial decrease in ESR and CRP levels in a study of RA patients.28  Studies have also explored ω-3 PUFAs in various oils, such as borage oil and evening primrose oil, to support a better steadiness of PUFA constituents.29  Additionally, soy and rest of the plants have been naturally altered to contain higher levels of Ω-3 PUFAs.29,30  Although marine creatures are the major source of Ω-3 PUFAs, some plant seeds also contain them. For example, flax, chia, and canola seeds are some of the richest source of ALA, which works as a precursor to the synthesis of LC PUFAs in the human body. Clinical nutritionists globally recommend combination of Ω-3 FA food sources in the diet. Linseed helps as the best Ω-3 FA source to those who don’t consume fish.31  In a study with a six-month follow-up, modifications in NSAID dosage were endorsed. A considerable decrease of NSAID requirement was perceived in patients who consumed Ω-3 FAs at 3 (p<0.05) and 6 months (p<0.01).32  Earlier studies have reported that flaxseed/ Linum (L.) usitatissimu revealed significant role in reducing inflammation, treating arthritis and also exhibited antiulcer properties.33  Flaxseeds provide abundant amount of fatty acids. Flaxseed contains 18% of monounsaturated FAs, 16% Ω-6 FAs, 9% saturated FAs and 57% Ω-3 FAs.34

Fish oils seem to improve RA indications, which is, perhaps, unsurprising as n-3 FAs are believed to be affected in the prohibition of the production of inflammatory eicosanoids. Numerous studies have revealed that really LC n-3 FAs decrease pain and morning stiffness and decrease the requirement for NSAIDs.35,36  A meta-analysis of 10 double-blind, placebo-controlled, comparative study in 395 patients showed that fish oil for three months was significantly associated with reduction in joint tenderness and morning stiffness. There were no substantial improvements in joint swelling, grip strength or ESR.37  Previously, a study on albino rats observed anti-arthritic action of linseed/flaxseed oil against turpentine oil-induced joint oedema and adjuvant induced arthritis. It has been observed that daily intake of linseed oil aids in reducing the inflammation of RA patients.31  An anti-inflammatory property of various plant lipids has been reported and findings showed that lipids consists of ALAs, like linseed oil, had significant anti-inflammatory action. Regardless of the evidence of total low quality of trials, ingesting of Ω-3 FAs was found to considerably improve disease activity inflammatory markers.23  Flaxseed can be used in food, skin care, hair care and other healthcare products rather than in flaxseed oil supplements.31  Various studies discovered that the flaxseed components supply disease defensive and therapeutic aids which helps in the expansion of new labelled healthy and functional foods utilising flaxseeds, oil and cakes.38

More studies are required to explore if a substitute is needed to NSAIDS in definite conditions.

Acknowledgement: We are grateful to all the study participants for cooperation.

Disclaimer: The text was presented at the 1st International Conference on Health and Environment which was held at the Allama Iqbal Open University Islamabad, Pakistan, on March 22, 2018.

Comparison of surface defects in Protaper Next and Hyflex EDM files after single clinical use: A stereoscopic evaluation