Objective: To assess the impact of the law and order situation of a city on the pattern of traumatic injuries and the overall outcomes of trauma victims.

Method: The retrospective study of prospective trauma surgery data was done at Aga Khan University Hospital, Karachi, and comprised data of patients with torso injuries before the improvement of law and order situation from January 2012 to March 2013 in Group A, and of those with similar injuries after the law and order situation improved in the city from January 2018 to March 2019 in Group B. The required data was collected by a single researcher using a predesigned questionnaire. Inter-group comparison was done to see the difference in patterns of injuries and outcomes. Data were analysed using SPSS 22.

Conclusion:  With the improvement in the law and order situation, there was reduction in overall trauma cases and the pattern of trauma shifted from penetrating to blunt injuries.

Traumatic injuries and violence are significant global public health concerns characterised by marked regional variation in incidence.1-3 Every day, 16,000 people die from injuries and for every person who dies, several thousand more are injured, many of them with permanent disabilities, while the loss of productivity due to death and disability from injury represents a significant loss of economic opportunity.4 Injury accounts for 16% of the global burden of disease.5 Approximately 90% of the total burden of injury occurs in low- and middle-income countries (LMICs).6,7

Karachi is a metropolitan city of Pakistan and is the capital of its Sindh province. It is ranked as the 5th most populous city in the world.8 The city is also known as the “city of lights” because of its vibrant lifestyle. Karachi was beset by sharp ethnic, sectarian and political conflict after 2000. The city had become well-known for its high rates of violent crime, street crimes, extortions, kidnapping and ransom. Because of its poor law and order situation, at times, there were certainly no-go areas within the city, and some of its areas were highly controlled by unofficial security provided by militant wings.  However, recorded crimes sharply decreased following a controversial crackdown against criminals, political parties and militants that was initiated in 2013 by the Sindh Police and Sindh Rangers. As a result of the operation, Karachi went from being ranked the world's 6th most dangerous city for crime in 2014 to 71 by mid-2019.9

The current study was planned to assess the impact of the law and order situation in Karachi on the pattern of traumatic injuries and the overall outcomes of trauma victims.

The retrospective study of prospective trauma surgery data was done at Aga Khan University Hospital (AKUH), Karachi, and comprised data of patients of either gender aged >16 years with torso injuries before the improvement of law and order situation from January 2012 to March 2013 in Group A, and of those with similar characteristics after the law and order situation improved in the city from January 2018 to March 2019 in Group B. AKUH is a private-care hospital well known for its state-of-the-art care of critically injured patients both during and after the troubled period in the city. After approval from the institutional ethics review committee, the data was collected by a single researcher using a predesigned questionnaire on the basis of consecutive sampling technique. Patients with missing data or in case of transfer-out to other hospitals after emergency room (ER) presentation or during hospital stay were excluded, and so were those who sustained injury outside the city. Only torso injuries were included because these related to the most seriously injured patients in both groups who were able to reach the hospital.

Data were analysed using SPSS 22.  Continuous variables, like age and length of hospital stay (LOS) were expressed as mean±standard deviation (SD), and changes in quantitative variables in the two groups were assessed using independent sample t-test. Qualitative variables, such as gender, the pattern of injuries, need for life-threatening operations required and outcomes, were expressed as frequencies and percentages, and the changes in the 2 groups were assessed using chi-square and Fisher's exact tests where count <5 was in >20% of cells. P<0.05 was considered significant. 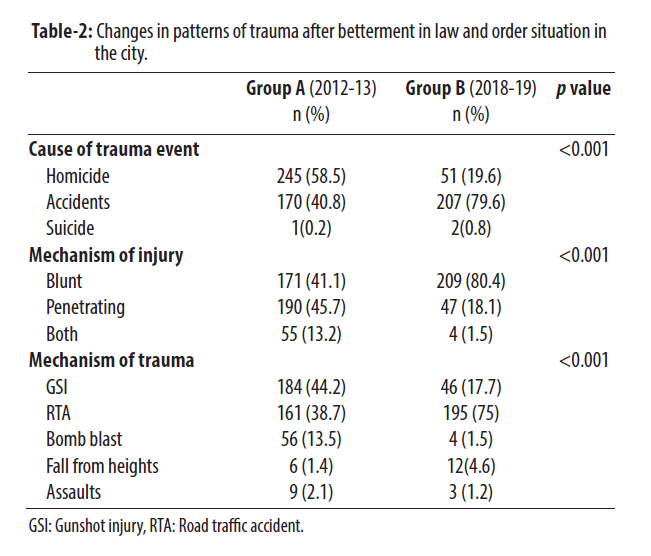 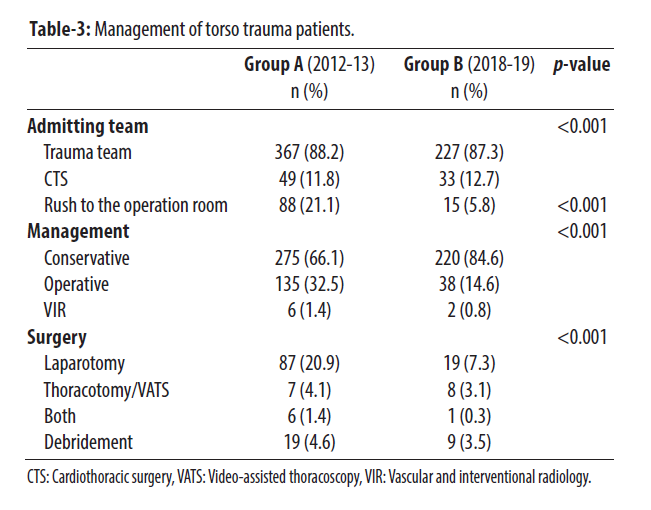 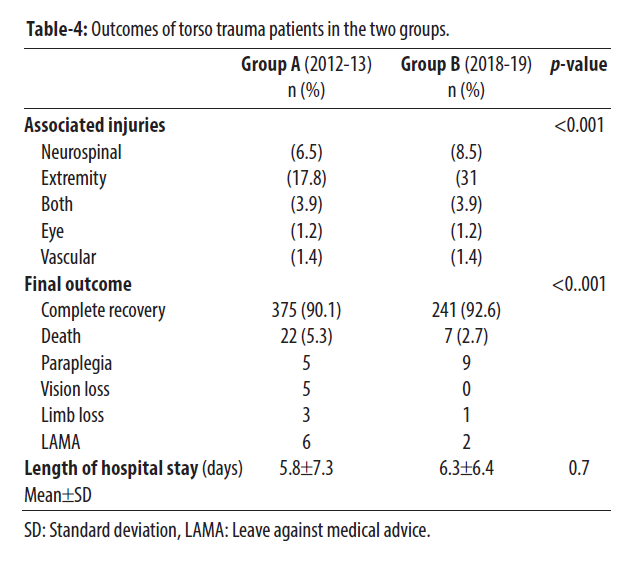 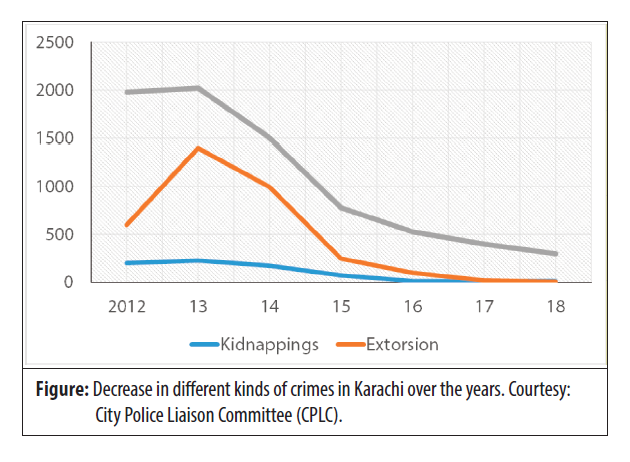 Literature has identified socioeconomic factors, improper legislation to possess violent tools, like weapons and knives, and concentrated poverty as independent risk factors for increased crime rates.11 Studies have also shown that a multifaceted approach with sustained investment from the government and the community is required for effective violence reduction.12,13 Research institutions, community organisations and community members play a vital role in determining and addressing the level of violence in a community alongside the efforts of law-enforcement teams.14  Youth violence can affect communities by substantially increasing the cost of healthcare, reducing productivity and diminishing property values.12,15

Although literature search could not produce any comparable study for Karachi, comparison of the findings with other trauma did not have any significant difference in terms of pattern of injuries, like those done in Qatar,16 Saudi Arabia17 and the United Kingdom.18 AKUH had received an unexpectedly higher rate of penetrating trauma during the troubled period which significantly dropped after improvement in the law and order situation.

Although the current study highlighted the fact that improved law and order situation of the city had a significant impact on hospital admissions and decreased morbidity and mortality, especially in the younger age group, much needs to be done for better sustainability of such effects. Researchers have found that narrowly focused interventions are likely to have limited impact unless they are part of a more comprehensive strategy.1419-21 Interventions to change the social climate through teaching knowledge, skills and attitudes that promote non-violence need to be implemented for better sustainability of these effects.22-24 Hence, a collective effort will be required besides good law and order situation of the city from the entire community to address one of the major public health problems.

The current study is the first of its kind done in the country. However, it has limitations as it was a single-centre study and AKUH shared a fraction of the trauma burden of the city along with other public and private hospitals. The importance of having a trauma registry to better evaluate the impact of any intervention, whether its reduction of crime rates or any community-based effort, is critical in reducing trauma injuries.

There was a significant decline in penetrating trauma after betterment in the law and order situation of the city. Since the pattern of trauma has changed from penetrating to blunt, more neuro-spinal and extremity injuries are being encountered which warrant attention.

7.       Murray CJ, Lopez AD. The global burden of disease: a comprehensive assessment of mortality and disability from diseases, injuries, and risk factors in 1990 and projected to 2020. Geneva: World Health Organization, 1996.