Objective: To investigate the effects of exenatide treatment on type-2 diabetes mellitus patients’ quality of life.

Methods: The cross-sectional study was conducted from March 1 to June 30, 2019, after approval from Suleyman Demirel University, Isparta, Turkey, and comprised type 2 diabetes mellitus patients of either gender under exenatide treatment. Data was collected using a questionnaire during face-to-face interview and included sociodemographic and clinical information along with the World Health Organisation-5 well-being index, the obesity awareness and insight scale, the obesity-specific quality of life scale and the coping orientation to problems experienced-brief inventory. Data was analysed using SPSS 22.

Diabetes mellitus (DM) is one of the main causes of death and its frequency is increasing across the World. Since 2000, the estimated prevalence of DM has increased by 5.7% worldwide to 9.3%. There were 30 million diabetics globally in 1985, but by 2005 there were more than 230 million diabetics; an increase of almost seven times in 20 years. According to the International Diabetes Federation (IDF), if nothing is done to slow down this epidemic, it is expected that the number of diabetics will increase to 700 million by 2045 from 463 million in 2019, indicating an increase of 51%.1,2 It is known that more than 80% of diabetics have weight problems and half of them are at obesity level. Studies showed that obesity in DM increases morbidity and mortality.3

According to the Turkish Epidemiology Survey of Diabetes, Hypertension, Obesity and Endocrine Diseases (TURDEP-II), the prevalence of diabetes in Turkey reached 13.7% and the prevalence of obesity reached 32% in the Turkish adult population, and obesity and diabetes were the most important public health problems.4 According the preliminary TURDEP-II results, mean weight, waist circumference and hip circumference increased in both genders.5

Timely medical intervention and its continuity are necessary for DM management.6 Further, failure to attain and maintain the target glycated haemoglobin (HbA1C) level despite long-term insulin and oral anti-diabetics (OADs) brought into play incretins which are hormones that stimulate insulin secretion in response to food intake.7

Glucagon-like peptide-1 receptor agonists (GLP-1A) mimic incretin hormones, and, therefore, GLP-1A exenatide was approved by the United States Food and Drug Administration (FDA) in 2005 and by the relevant authorities in Europe, Middle East and Africa (EMEA) in 2007.8 It was put into use in Turkey in 2010. A study showed that GLP-1A was superior to other DM treatments in terms of diabetes and weight control.9 The American Diabetes Association (ADA) and the American Association of Clinical Endocrinologists (AACE) indicated that treatment with GLP-1A, sodium-glucose co-transporter-2 (SGLT-2) inhibitor or non-insulin treatment should be intensified in patients who cannot achieve glycaemic control with basal insulin.6,8,10,11 Thus, GLP-1 agonists became a second-line treatment option.

The quality of life (QOL) includes cognitive and emotional components of an individual, and is defined as subjective perception of social, emotional and physical well-being.12Studies found that the presence of complications, lack of adequate metabolic control, the presence of any other chronic disease, having previous psychiatric illness, and accompanying obesity result in insulin having negative effect on QOL.12-14

The current study was planned to investigate the effects of exenatide drug treatment on type 2 DM (t2DM) patients’ QOL.

The cross-sectional study was conducted from March 1to June 30, 2019, at endocrinology and metabolic diseases polyclinics of universities and public hospitals in Turkey’s western province. After approval from the ethics review committee of Suleyman Demirel University, Isparta, Turkey, T2DM patients of either gender under exenatide treatment were included without using any sampling technique. All T2DM patients presenting to the polyclinics during the study period constituted the study universe. Patients having spent <3 months under exenatide therapy and those not willing to participate were excluded.

After taking consent from the participants, data was collected through a questionnaire using face-to-face interview method. In the first part of the questionnaire, data related to socioeconomic status (SES), disease status, anthropometric measurements and lifestyle information was collected. In anthropometric measurements, height, weight and weight change of the preceding 1 year were asked about, and body mass index (BMI) was calculated. Open-ended questions about the use of exenatide were added to the questionnaire. The second part of the questionnaire comprised the World Health Organisation-5 well-being index (WHO-5), the obesity awareness and insight scale (OASIS), the obesity-specific quality of life scale (OSQOL) and the short form of coping orientation to problems experienced (Brief-COPE) inventory. WHO-5 collects data on the health status and QOL of individuals related to their physical and social environment.15,16 The short form of WHO-5 was used to determine patients’ QOL. This scale consists of 5 subscales, with overall score having a 0-25 range. Low scores indicate low QOL.15,17

OASIS has 23 items and three sub-dimensions.18 The Turkish version of the scale19 was used which is scored on a 4-point Likert scale and has three subscales, and higher scores indicate high awareness level.19 The Turkish version of OSQOL is a 17-item tool scored on a 6-point Likert scale.20,21 A single QOL score is obtained by summing up all items of OSQOL, ranging 0-100, with higher score indicating higher QOL. The Turkish version of Brief-COPE22 is a self-reporting scale having 15 subscales and 60 questions. Each subscale score ranges 4-16 points. The sum of the scores of the first five of these subscales is the problem-oriented coping score. The sum of the 6th to 10th subscale scores gives the emotional-oriented coping score, and the sum of the last five subscale scores gives the non-functional coping score.

All the patients (100%) said they did not prefer exenatide as a first-line treatment option. The most common reason cited in favour of exenatide related to weight-loss 121(82.9%). Of the total patients, 84(57.5%) had used insulin before exenatide, and they were asked to compare the effect of the two on QOL. Majority of them described the use of exenatide as much more comfortable compared to insulin use (Table-2). 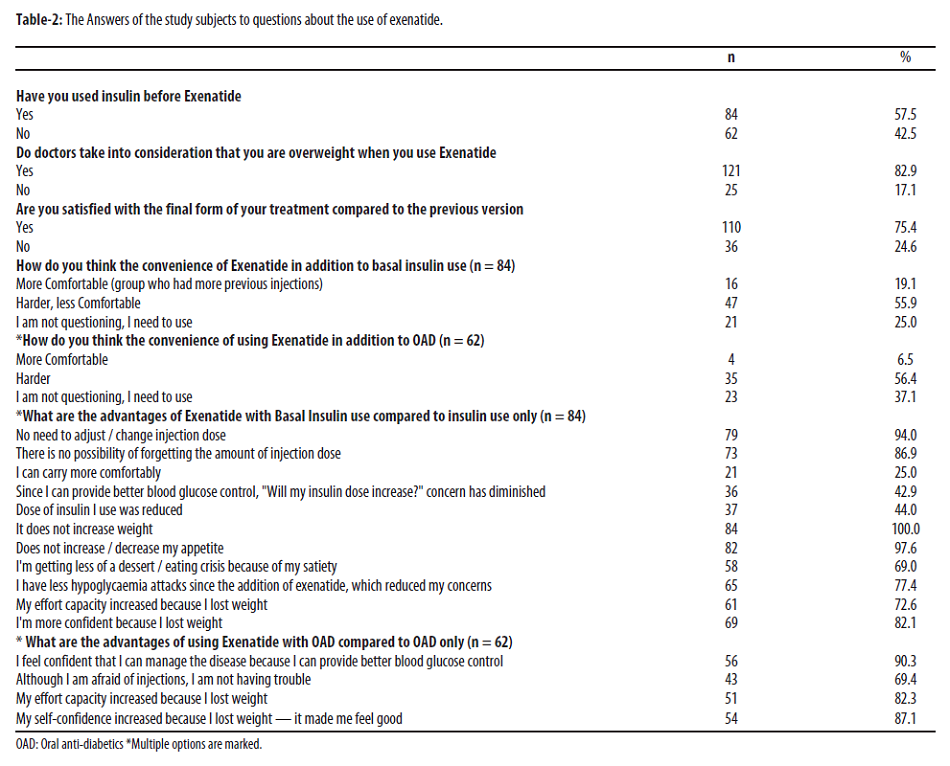 The scores for the various scales used in the study showed that the patients were feeling more vigorous and active, and that the levele of awareness had increased (Table-3). 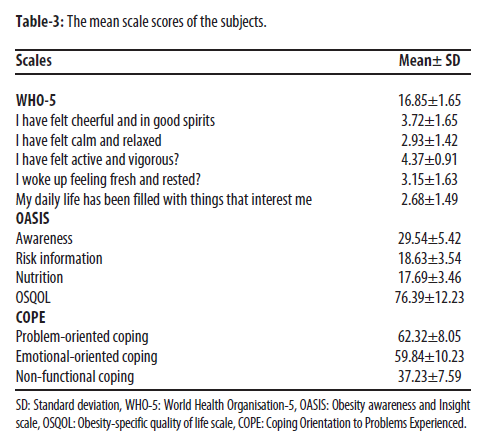 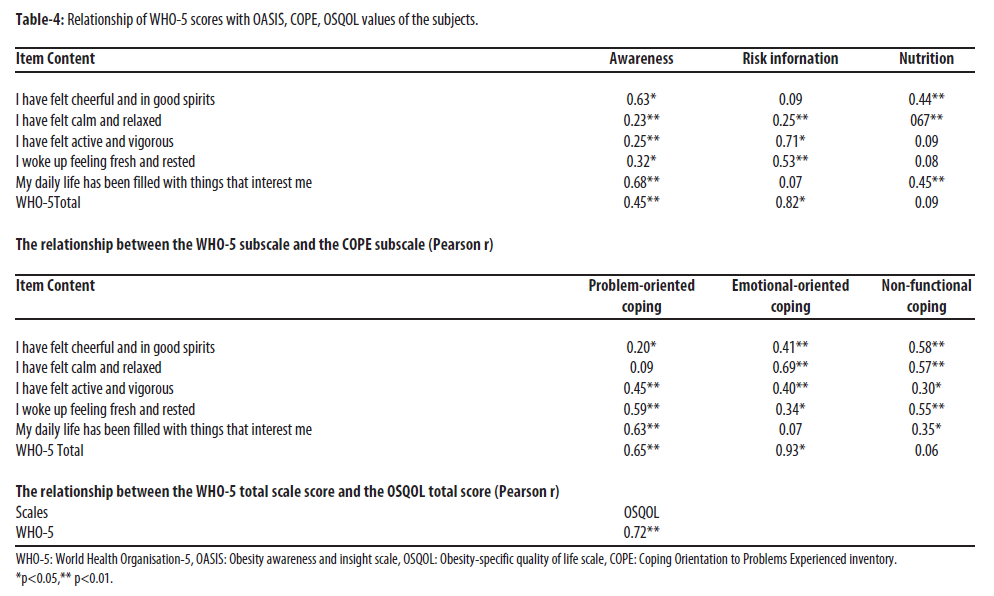 With DM cases rising rapidly, multi-directional evaluation is needed for good management and effective treatment of the disease.3,23 Patient compliance in treatment is as important as the effectiveness of prescribed medications. In the current study, exenatide was not started as the first-line treatment option, which is in line with literature.23 Patients described the use of exenatide as much more comfortable compared to insulin use in the current study, and it boosted their confidence as well.

Knowledge about risks and more awareness increased the QOL significantly (p<0.05) in the current study. Another study24 reported that treatment satisfaction was better in exenatide users after the 30th week. Also, it reported that weight-related QOL scores were higher in exenatide users, and, the widespread side-effects of exenatide, like nausea and vomiting, did not affect treatment compliance, QOL and treatment satisfaction of patients both physically and psychologically.24

GLP-1A production is coordinated by caudal neurons in the brainstem and excitation in this region also extends to hypothalamic areas that control the surrounding stress and energy haemostasis.25 Exenatide suppresses the appetite centre, arouses the feeling of satiety that leads to a serotonin-like effect chain.24

The use of exenatide was found to be a good treatment option for glycaemic control. Exenatide affected both physiological and psychological parameters, and contributed positively to the well-being of DM patients. Weight loss was found to be the secondary gain of the treatment.

Effect of brain damages on logical inferences of depressive adults