This short report highlights the patient outcome of lung resections for congenital and acquired lung lesions in children who presented to the Liaquat National Hospital, Karachi, from January 2013 to April 2019. Common indications were congenital pulmonary airway malformation (CPAM), congenital lobar emphysema (CLE), and bronchiectasis. Two patients died whereas, 21 were discharged home. Lung resection can be performed safely in children. Early diagnosis and surgery may improve the outcome.

Lobectomy is a surgical procedure where the diseased or non-functional part of a lung is removed, so that the remaining healthy lung tissue can work normally.1 A lobectomy is most often done via thoracotomy. In paediatric population, there are some anatomical and physiological characteristics that make the patients susceptible to postoperative complications as compared to adults, after open thoracic surgery.2,3

Open lung resection is mostly performed for the correction of congenital malformations, including congenital cystic adenomatoid malformations (CCAMs), congenital lobar emphysema (CLE), sequestrations, and bronchogenic cysts.4,5 The rate of resection has increased in recent years owing to the advancement in antenatal diagnosis of pulmonary disorders. In many cases, even asymptomatic lesions are removed on the basis that they pose a future risk of infection or malignancy.6

The main benefits of surgical intervention in paediatric patients are reduced symptoms and exacerbations.7,8 It has been recommended that surgical intervention should be undertaken at one month of age as it is associated with a better outcome and least postoperative complications. Lobectomy has been reported as the treatment of choice.7 In contrast, a cohort study from Tokyo, Japan, that evaluated the lung function in children undergoing lobectomy claimed that over inflation of the remainder of the lung compensated for the lost vital capacity after lobectomy with subsequent alveolar multiplication bringing the vital capacity back to normal levels.9 Thus, the optimum management is still a controversial topic.10 The objective of the current study was to report the outcome of lobectomies performed among the paediatric population in our setup.

This was a retrospective study conducted at the Liaquat National Hospital, Karachi, from May 2019 to December 2019, using retrospective data from January 2013 to April 2019. Ethical clearance was obtained from the institutional review board of Liaquat National Hospital. A total of 23 children from 0 till 13 years of age who had undergone elective thoracotomy and lobectomies were included. All thoracotomies were performed by the same paediatric surgeon.

After routine preoperative preparation, the patients were positioned laterally on the operation table. An incision 2-3 cm inferolateral to the nipple and 1-2 cm inferior to the tip of scapula was made. Latissimus dorsi muscle was divided from anterior to posterior through skin incision. The thorax was accessed through the 5th or 6th intercostal space. Principally, the serratus anterior muscle was not divided. If more exposure was needed after intercostal muscle division, the serratus anterior muscle was divided inferiorly. 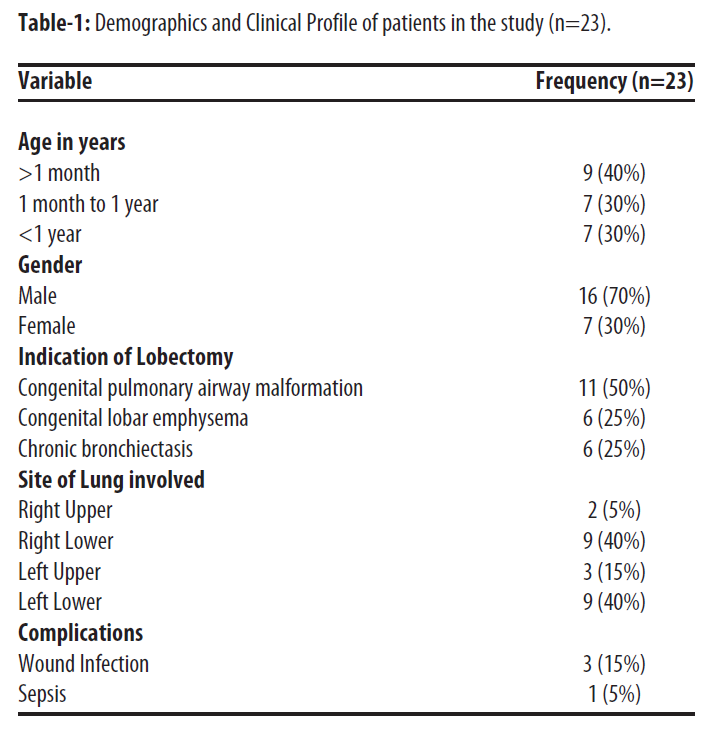 Data including age, gender, side, and lobe of the lung involved, primary disease, antenatal diagnosis, preoperative and postoperative ventilator status, length of stay and outcome in the form of discharge or mortality were recorded. The diagnosis of all children was confirmed on histopathology. All data was analysed using the statistical software for social sciences (SPSS).

A total of 23 patients were enrolled in the study, out of which 16 (70%) were males and 7 (30%) were females. The mean age of the patients was 35.4±11.5 months with a range of 0 to 13 years. Indication of lobectomy was CCAM in 11 (50%), CLE in 6 (25%) and chronic bronchiectasis in 6 (25%) children. One (5%) patient had bilateral thoracotomy with bilateral lower lobectomies in staged procedure, for bilateral congenital pulmonary airway malformation. One (5%) patient required preoperative ventilator support that was continued postoperatively, while 1 (5%) child needed ventilator support postoperatively due to sepsis (Table-1).

The average length of stay was 10.3±5.2 days. Out of the 23 patients, 2 (10%) died while others were discharged home safely. Among the two who died, one patient had CPAM and the other had severe CLE. No early recurrence was noted in the study. 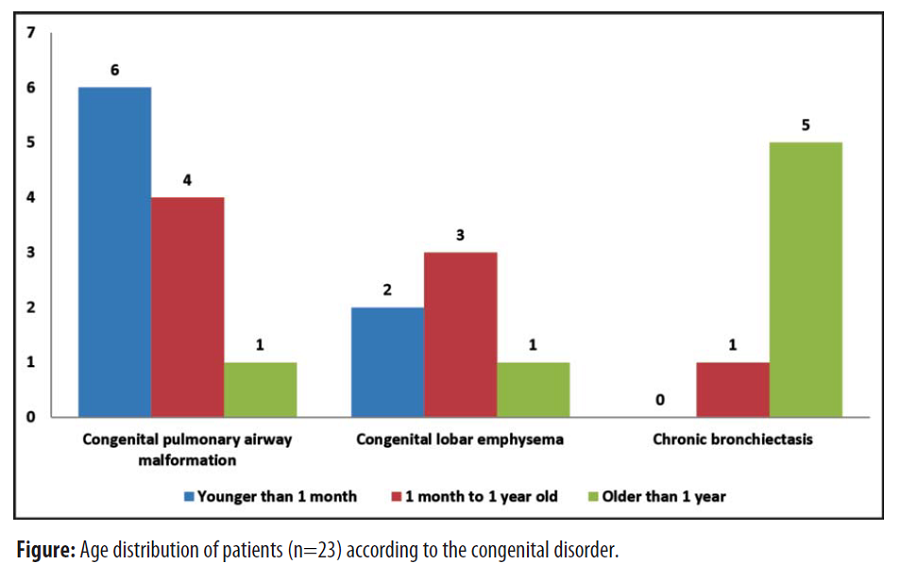 Congenital lung diseases in paediatric population are associated with grave outcomes and a high mortality. The optimum management is controversial and a topic of research for many decades now. Open pulmonary resection has been linked to a paradoxical increase in lung infections, as well as increased risk of thorax deformity postoperatively.9 The primary aim of the present study was to report the outcome of open lung resection or lobectomy indicated in congenital pulmonary disorders among the paediatric population in Karachi, Pakistan.

Out of the 23 cases we observed in the study, 10(50%) presented with congenital pulmonary airway malformation (CPAM), 5 (25%) presented with congenital lobar emphysema (CLE) and 5 (25%) had chronic bronchiectasis which resulted in a fibrotic lung. The findings in the present study were coherent with the data revealed in a study conducted in 2016 in Brazil where the main indications for lung resection were reported to be bronchiectasis or atelectasis, severe haemoptysis, and broncho-pleural fistula which is intractable to medical therapy.10

The main benefits of surgical intervention in paediatric patients are reduced symptoms and exacerbation, and a better-quality life. It has been observed that the age of the child at the time of the surgery may affect the outcome and prognosis of the disease. In the present study, majority of the cases of congenital pulmonary airway malformation (90%) and congenital lobar emphysema (100%) were surgically treated within one month to one year of life. In a recent study from India, the most commonly reported congenital lung lesion was congenital cystic adenomatoid malformations (CCAM) involving 55.56% cases, followed by congenital lobar emphysema (CLE) seen in 37.77% cases and bronchogenic cysts (BC) in 6.67% cases.8 It was recommended that surgical intervention should be undertaken at one month of age as it is associated with a better outcome and least postoperative complications. They also reported lobectomy to be the treatment of choice.

A cohort study from Tokyo, Japan, evaluated the lung function in children who underwent lobectomy. The study reported that over inflation of the remainder of the lung compensated for the lost vital capacity after lobectomy with subsequent alveolar multiplication bringing the vital capacity back to normal levels.9 In contrast, a study in Paris, France, reported that surgery did not have any significant impact on relieving the distressful symptoms of congenital lung malformation among patients but increased the risk of postoperative infections and other complications.11 Certain factors such as the age of the child, preoperative infection, or a pre-existing thoracic deformity may affect postoperative outcome pertaining to pulmonary function and growth.

In our study, the fatality rate was reported to be 10%. The two patients with diagnosed congenital pulmonary airway malformation and congenital lobar emphysema died of postoperative complications. Hall NJ. et al in his study reported complications in 14 out of 60 cases (23%). Three (5%) major complications that were reported in the study included tension pneumothorax, aggressive fibromatosis of the chest wall, and hypovolaemic cardiac arrest due to massive haemorrhage. However, in contrast to our study no deaths were recorded.4

Prenatal diagnosis of congenital lung disease plays a vital role in determining the therapeutic approach for the patient. Early detection and management may improve the prognosis and significantly alter the course of the disease. It is highly important to counsel the parents about their child's condition and have a realistic approach towards it.

Future research should focus on evaluating the efficacy of novel techniques like video-assisted thoracoscopic pulmonary resection versus classic approach of open lobectomy in paediatric population. Additionally, different therapeutic management options can be explored for patients with asymptomatic congenital lung disease and the benefits of early lung resection in these cases.

This study indicated that lobectomy through open lung surgery in paediatric population is effective for the treatment of various lung diseases.

The evolving role of digital media in medical education