Results: Of the 544 studies found, 34(6.25%) met the inclusion criteria. The trend indicated an increase in use of antimicrobial-loaded scaffolds that caused inhibition of periodontal pathogenic bacteria, accompanied with greater cellular interaction, and differentiation for alveolar bone healing. Contemporary treatment tactics clinically prove the ability to limit disease progression, but complete periodontal regeneration needs to be validated yet.

Conclusion: Emerging trends are not only improving the inhibitory effect of bacterial growth, but are also making a favourable environment for cell proliferation and differentiation, resulting in alveolar bone repair and re-growth.

Periodontal disease, also acknowledged as a disease of gingiva, supporting connective tissues and alveolar bone, is an inflammatory condition initially marked by swollen and bleeding soft tissues surrounding the teeth, which, when untreated, progresses into gingival recession, leading to bone resorption and eventually tooth loss.1 The prevalence of periodontal disease differs in various demographical regions, with Asian countries having a slightly higher rate of incidence and severity. It affects around 2-20% of the adult population with 300 million people being affected worldwide, while in Pakistan a study reported about 98% prevalence rate.2

The main challenge for now is to obtain both mechanical and functional bio-stability along with vascularisation of the in-vitro grown cells. This complex functionality possesses some serious hurdles in this interdisciplinary field.6 The current systematic review was planned to evaluate different studies involving antimicrobial-loaded periodontal scaffolds and its drug delivery, thereby estimating the clinical validity of the use of antimicrobials within periodontal scaffolds.

The systematic review was done at the Army Medical College, National University of Medical Sciences (NUMS), Rawalpindi, Pakistan, in April 2018, and comprised studies published in English language up to April 20, 2018. All titles and abstracts of articles and patents initially found were analysed. Literature was searched using key terms "Antimicrobial releasing periodontal scaffolds" primarily on Science Direct, PubMed and Web of Science search engines with a limitation to their registered published papers. Any article which was difficult to access was secondarily searched using Google Scholar search engine. Full copies of all potentially relevant articles were analysed by two reviewers. Any disagreement on eligibility of articles was resolved with mutual consensus (Figure-1). 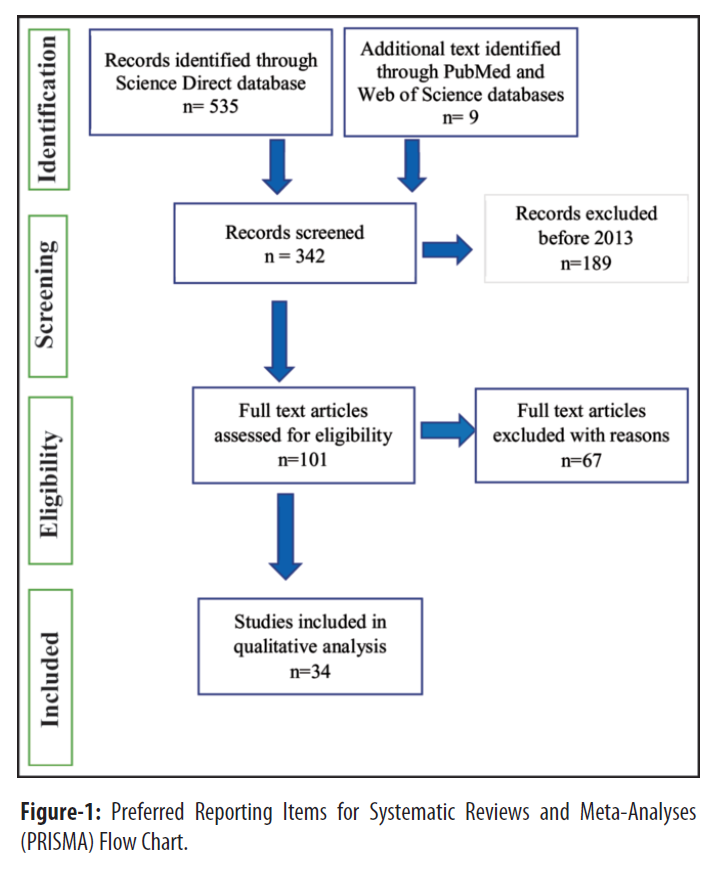 Studies excluded were related to drug-releasing resins and antibacterial releasing cements as well as comparative studies, review articles and articles whose full text was not available.

Quality of included studies was assessed by two individuals at different time intervals. The Cochrane statistical collaboration review guidelines were followed and results for Risk of Bias were calculated considering important aspects reported and elaborated as having low, medium and high risk for bias.1

Of the 544 studies found, 34(6.25%) were selected (Figure-1). The studies were categorised into in-vitro (Table-1) group and another group comprising in-vivo and mixed studies (Table-2). Risk for bias was calculated for each study (Table-3). 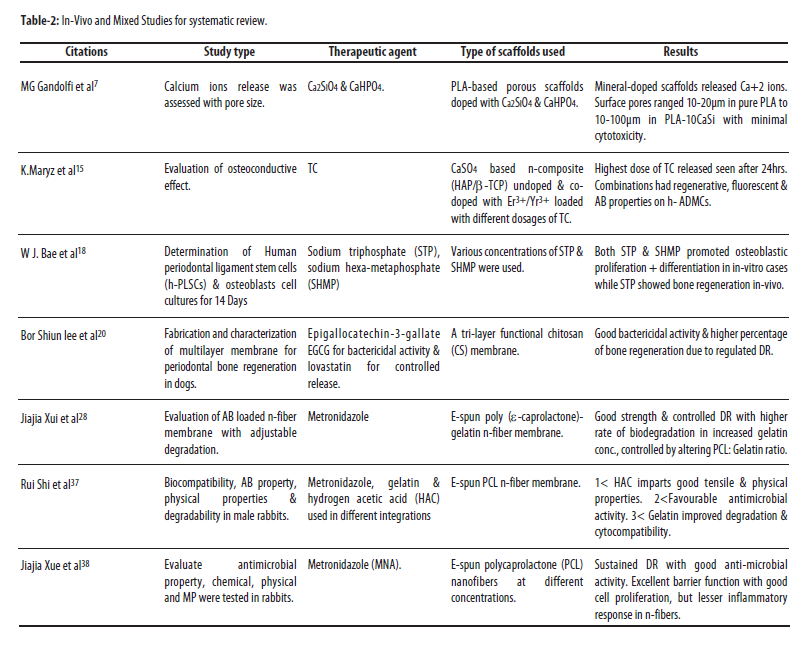 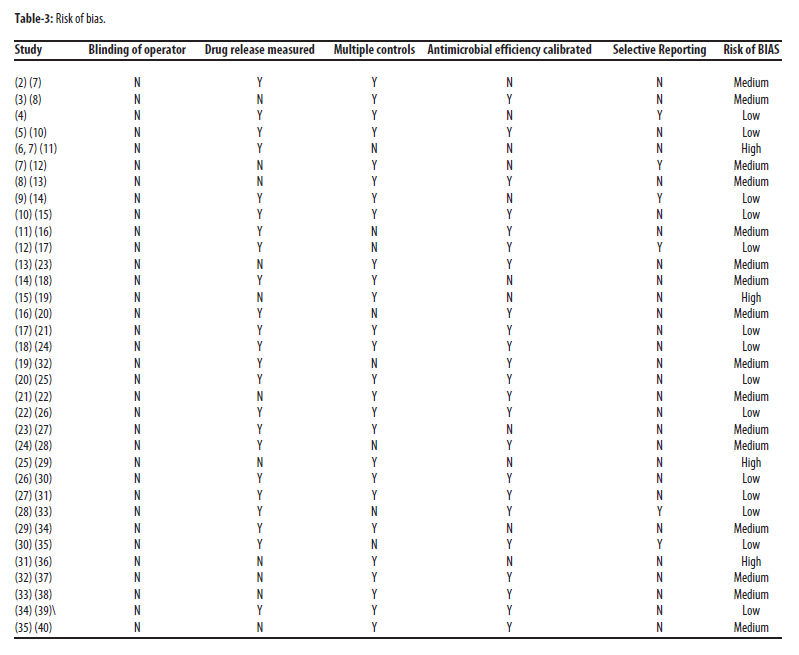 The research trend pivoting towards use of antimicrobial-loaded scaffolds was seen to be growing since 2013 onwards (Figure-2). Employment of antimicrobials reported reduction in number of periodontal pathogens and promotion in terms of osteoblastic differentiation. Different drugs generally employed in periodontal ailments included tetracycline hydrochloride, beta tricalcium phosphate, metronidazole, doxycycline, ciprofloxacin, ampicillin, zinc phosphate, tri-calcium silicate and chitosan. Any of the selected antimicrobial agent was incorporated into the scaffold matrix by employing required fabrication methods, majorly obliging e-spinning and solvent-casting procedures. In cases where enhanced and modified properties were required, hybrid blends, composites and multiple layering of potential matrix bases were utilised for restrained drug release. 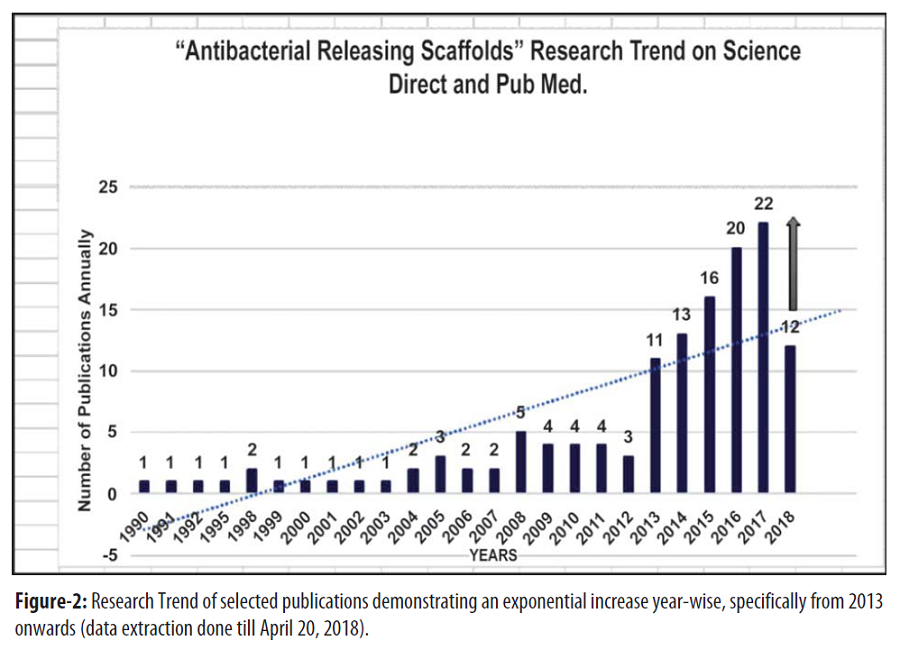 Chitosan, a natural polymer, is being used as a scaffolding material due to its good biocompatibility, antibacterial, antifungal and mechanical properties and resorption rate. Chitosan-pectin hydrogel extracellular matrix (ECM) is used for alveolar bone regeneration.9 They also inhibit P. gingivalis in periodontitis by sustained drug release.10 Hybrid of chitosan with other materials makes it one of the most commonly used scaffold material showing excellent results.11 Cell culture studies of chitosan / Alginate / polylactic-co-glycolic acid (PLGA) hybrid scaffolds are reported to promote cell adhesion, proliferation and differentiation with minimal cytotoxicity.9

Biodegradable polymers, like polylactic acid (PLA) and polyglycolic acid (PLG) hold special importance due to their bioactivity and biodegradability and are used alone or in combination.10,11 They are widely used in the form of PLGA and poly-L-lactide (PLLA). Use of electro-spun PLA scaffolds loaded with antibacterial drugs, like metronidazole and ampicillin, leads to inhibition of pathogenic bacteria in both endodontic and periodontal infections.11 PLGA scaffolds doped with drugs had favourable biocompatibility, biodegradability, cell viability, mechanical properties along with sustained drug release.12

Effect of Antimicrobial Agent Incorporation: Scaffolds of varying composition differed in their inherent properties in the drug delivery system. One of the most routinely used antimicrobials is tetracycline (TCH), a broad-spectrum antibiotic. The inclusion of tetracycline hydrochloride (THC) into chitosan / polyvinyl alcohol (PVA) nano-fibres showed good antibacterial properties due to initial burst drug release, resulting in effective inhibition of targeted bacteria involved in periodontitis. Out of 34 studies included, 8 used THC as an antibacterial drug, depicting TCH as a promising antibiotic for periodontal use. However, due to the emergence of resistant strains against TCH, other options are more validated.15

Antimicrobial agents in periodontal scaffolds inhibit microbial colonies and improve bone regeneration and growth. In the light of the data, it can be seen that with decrease in microbial count, increased cell adhesion, proliferation and differentiation was observed due to the inclusion of favourable agents.20 All of the therapeutic agents included into the scaffolds demonstrated compatibility with other biomaterials used, such as titanium, calcium silicate and bio-glass. Majority of these agents did not affect mechanical properties of scaffolds, but a few of them, such as tetracycline hydrochloride, chitosan and beta-tricalcium phosphate, enhanced their properties while others exhibited different results in dry and wet states.22 Although biomaterials, like autologous stem cells, bio-glass, polytetrafluoroethylene (PTFE)-based scaffolds, have been tested clinically in periodontal regenerative therapy, majority of antimicrobial-loaded scaffolds need to go through clinical trials which would confirm their action.

New antimicrobial-containing scaffolds are emerging rapidly with better properties and enhanced antibacterial activity. This emerging trend is not only improving the inhibitory effect of bacterial growth, but is also making a favourable environment for cell proliferation and differentiation, resulting in alveolar bone repair and re-growth. Available data demonstrated potential upsurge in the use of antimicrobial-loaded scaffolds in evidence-based dentistry for periodontal regeneration. However, more clinical trials are needed in order to make them a clinically acceptable choice and to confirm their effectiveness against dental pathogens and alveolar bone regeneration.

Role of virtual reality and active video games in motor and executive functions in cerebral palsy: A systematic review