Objective: To highlight the clinical characteristics of primary biliary cholangitis on the basis of gender in terms of the extent of liver injury and extra-liver autoimmune expressions.

Methods: The retrospective study was conducted at the Tri-Service General Hospital, Taiwan, and comprised data of patients aged >20 years diagnosed with primary biliary cholangitis between January 2000 and December 2018. Patients in the control group were randomly selected from the health examination centre. Liver injury manifestations and susceptibilities were analysed along gender lines. The gene expression microarray data from the National Centre for Biotechnology Information Gene Expression Omnibus database was also used to explore the relationship between autoimmune-induced inflammation and androgen response expression. Statistical analysis was done using Graph-Pad Prism 7.0.

Conclusion: The association between androgen receptor responses and inflammation was linked to gender-related hepatic injuries, which may explain why liver inflammation in male patients is generally more severe compared to the female patients.

Primary biliary cholangitis (PBC) is a chronic cholestatic liver disease that progressively destroys small biliary ducts. Its pathogenesis remains unknown, but is thought to be related to autoimmune system disturbance due to the high specificity of antimitochondrial antibodies (AMA).1 Although the female-to-male ratio of PBC cases is reportedly 10:1,2 China and Sweden have underestimated its prevalence among the males.3 Growing concerns regarding PBC incidence among males underscores the importance of early testing, especially with decreased prevalence of hepatitis B virus (HBV) and hepatitis C virus (HCV).

Ursodeoxycholic acid (UDCA), which significantly delays the progression of periportal necroinflammatory lesions, is the only first-line drug approved for PBC treatment. Other potential agents that have been considered include obeticholic acid and peroxisome proliferator-activated receptor (PPAR) agonists.4 Gender-related differences in disease activity or UDCA susceptibility have not been explored. Recent studies have determined that being female is a susceptibility factor for drug-induced liver toxicity, but a negative predictor of non-alcoholic fatty liver disease.5,6 These conflicting results show the underlying pathophysiology related to gender. Lieo et al. identified that being male is an independent predictor of all-cause mortality in PBC-related cholestatic liver disease cases, but did not determine the extent of liver damage.7 The current study was planned to determine whether gender is a potential risk factor for liver injury or a potential negative prognostic factor.

The retrospective study was conducted at the Tri-Service General Hospital, Taiwan, and comprised data of patients aged >20 years diagnosed with primary biliary cholangitis between January 2000 and December 2018 after approval from the institutional review board.

PBC diagnosis was made according to the American Association for the Study of Liver Diseases guideline 2018.8 At least two of the following had to be met to be labelled as PBC-positive: an elevation of alkaline phosphatase levels, the presence of antimitochondrial antibodies, or evidence of histology. The diagnosis was confirmed using the medical records.

Patients in the control group were randomly selected from our health examination centre using a gender ratio similar to that of the PBC group. Those excluded had a history of alcohol consumption, smoking, age <20 years, or malignancy. Data from GenBank (accession number: GSE119600) was used to explore the relationship between induced autoimmune inflammation and androgen response expression. The gene expression microarray data was downloaded from the National Centre for Biotechnology Information (NCBI) Gene Expression Omnibus (GEO) database (http://www.ncbi.nlm.nih.gov/geo/).9 The maximum expression values of multiple probe identifications (IDs) which corresponded to one official gene symbol were computed, and these values were used to represent the expression level. An enrichment analysis of the androgen response and inflammatory response in a hallmark gene set using the blood transcriptome of 90 separate PBC and the gene set variation analysis (GSVA) method was used to explore peripheral blood mononuclear cells (PBMCs) androgen receptor response and inflammatory response. 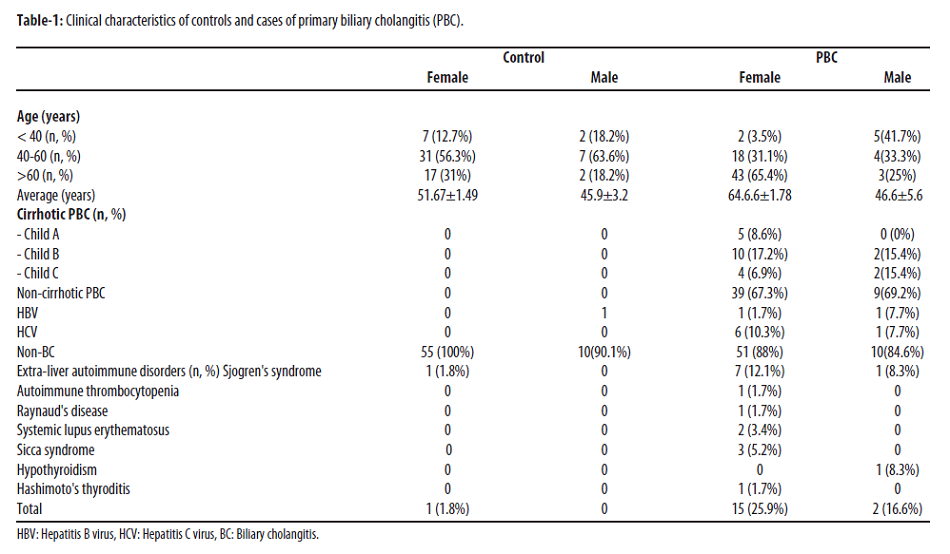 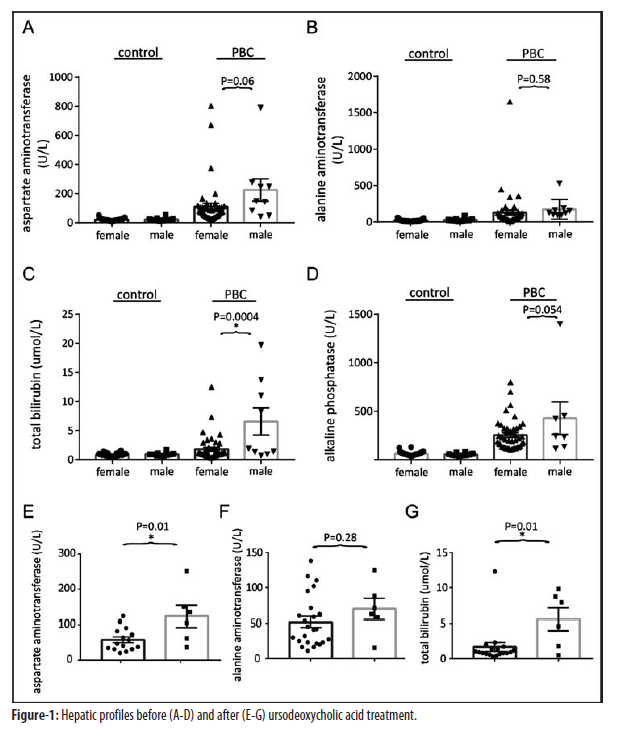 Enrichment analysis of the androgen response and inflammatory response in a hallmark gene set using the blood transcriptome of 90 PBC patients and GSVA showed a significant positive correlation between PBMC's androgen receptor response and an inflammatory response (Figure-2A).10,11 Considering that PBC inflammation can be indirectly evaluated by looking at the toll-like receptor (TLR)-related inflammation signalling pathway in PBMCs, the correlation between the TLR and inflammatory signalling (M16) gene set in the blood transcription modules (BTMs) and the androgen response was anlaysed, and results showed a significant positive correlation (Figure-2B).

Both male and female PBC patients presented with different prevalence rates, clinical manifestations, extrahepatic autoimmune disorders, and disease susceptibility. The current study comprised BC patients. Since all Taiwanese people are covered by national health insurance, the patients were not evaluated in the context of their socioeconomic status. Moreover, 90 PBC patients were assessed from the GenBank to support the findings.

Different female-to-male ratios have been reported from various regions.12 In Europe, the ratios range from about 2.3:1 to 4.2:1, and even as high as 10:1; in Canada, the ratio is 5:1; and in Asia, the ratio has been estimated to be 9:1 or 6:15.13 The current study found a 4.83:1 ratio, confirming significant prevalence among the females. Additionally, most PBC patients were diagnosed after age 40 (Table-1), corroborating previous findings.14 There was about 10% HBV and HCV co-infection in the current sample. This low co-infection rate may be a result of hepatitis B vaccinations and Taiwan's advanced public healthcare system.

PBC is associated with a number of other autoimmune diseases.15,16 Sjögren's syndrome was the most common disease found in both male and female PBC patients, and women also had other autoimmune diseases, such as autoimmune thrombocytopenia, Raynaud's disease, systemic lupus erythematosus, and Sicca syndrome (Table-1). This may be explained by the X-linked genes and X-chromosome gene products that participate in female genetic predisposition.17,18

In the current study, male patients showed more severe hepatobiliary injuries, as indicated by higher total bilirubin levels, than female patients (Figure-1C). Even following UDCA treatment, higher AST and total bilirubin levels were noted in male PBC patients (Figures-1E and 1G). Carbone et al. used multivariable analysis to establish age and gender as determinants of UDCA treatment response.19 Since there were no age distribution differences in the current study, gender may be a risk factor for UDCA treatment failure.

Several previous studies have addressed the controversial issue of differences in male and female mortality.7,20 Major population-based national reviews have reported higher mortality rates for males than for females, suggesting that this is due to men being more likely to receive delayed diagnoses.19,21 Male patients with PBC in the current study showed more severe liver damage than female patients, which contrasts with Carbone et al.'s finding that men are less likely to be symptomatic.19

Other studies have investigated the connections between gender and cholestasis. However, PBC is a different type of cholestatic disease, and it is still too early to say whether blocking androgen receptor signals can reverse liver inflammation and delay disease progression. Further studies are needed to validate the relationship between androgen receptors and liver injuries in patients with PBC.