Objective: To determine the frequency of human immunodeficiency virus among pregnant women reporting for antenatal care at a tertiary care hospital.

Method: The cross-sectional study was conducted at Unit-1 of the Department of Obstetrics and Gynaecology, Jinnah Postgraduate Medical Centre, Karachi, from August 2018 to January 2019, and comprised all women attending antenatal clinics aged 15-40 years having gestational age of at least 10 weeks confirmed by trans-vaginal/trans-abdominal scan. Data was collected using a predesigned questionnaire. Data was analysed using SPSS 21.

Results: There were 642 pregnant women with a mean age of 25.80±4.91 years, and mean gestational age of 24.34±5.38 weeks. Of the total, 5(0.7%) subjects had family history of human immunodeficiency virus and 1(0.2%) had a positive result for the virus. There was significant association of human immunodeficiency virus with family history of the disease (p=0.001) and with history of drug abuse (p=0.003)

Conclusion: Screening of human immunodeficiency virus during the antenatal period is a useful tool for better management.

Human immunodeficiency virus (HIV) is a major global public health issue having claimed more than 35 million lives so far.1 In 2014, the World Health Organisation (WHO) reported that the pandemic of HIV and acquired immunodeficiency syndrome (AIDS) had affected 34.4 million adults all over the world and 17.4 million of them were women.2 In 2016, 1 million people died from HIV-related causes globally.3,4 There were approximately 36.7 million people living with HIV at the end of 2016, with 1.8 million people becoming newly infected in 2016 worldwide.4 HIV has devastating effects on individuals and families. An HIV-infected person is treated as an outcaste. It not only contributes to the social and financial burden, but also causes mental health issues.5 Struggles for HIV prevention, like the use of antiretroviral therapy (ART) and prevention of mother-to-child transmission (PMTCT) are practised worldwide.6 Approximately 54% of adults and 43% of children living with HIV are currently receiving lifelong ART. More than 95% of HIV infections are in low- and middle-income countries (LMICs).7 Global ART coverage for pregnant and breastfeeding women living with HIV is quite high at 76%.8 As of 2014, the prevalence of HIV in Pakistan was <0.1%. A national study conducted in 2011 among 26,500 women in antenatal clinics found the prevalence to be 0.04%.9 Another national study reported the prevalence of HIV among pregnant women to be 1.7%.10

The prevalence of HIV has steadily risen in the past few decades from the detection of the first HIV-infected Pakistani in 1987 to reach the prevalence of 27.2% only among intravenous (IV) drug users.9 Pakistan is now in a group of 'countries in transition'.11 Although, according to the statistics, HIV infection has not reached 1 adult per 1000 in Pakistan, several factors make Pakistan clearly at risk of HIV spread, like Pakistan was classified as low-prevalence high-risk country, but now Pakistan is in the concentrated phase of an epidemic;12,13the country shares border with India where the prevalence of HIV/AIDS is very high and there is frequent travelling of people from one country to the other; there is a high rate of illiteracy and poverty; and there is a high rate of sexually transmitted diseases (STDs) in the rural areas.

In Pakistan, the majority of current HIV infections are estimated to occur among four groups of at-risk populations, despite their accounting for under 2% of all adults: injecting drug users (IDUs) accounted for 36.4% of HIV cases, which is the largest share of infections in any one group. Female, male and transgender sex workers accounted for 24%, 12% and 17.5% respectively.14 This epidemic has now transmitted to female partners of HIV-positive IDUs, bisexual men and to young children via vertical transmission. Due to social and cultural barriers, HIV-infected pregnant women and children do not have access to treatment which further impedes its prevention.15

HIV screening is recommended in pregnancy at the booking visit as routine investigation by the Royal College of Obstetrics and Gynaecology (RCOG).16 One of the great achievements in the response to the AIDS epidemic in well-resourced settings is the prevention of MTCT by developing and putting into practice strategies for the care of HIV-positive pregnant women. The strategies of diagnosing or identifying HIV-infected pregnant women, the use of ART and avoidance of breastfeeding has led to the reduction in transmission to <2%. The success of this programme depends basically on the identification of HIV-positive women during pregnancy.17

Even though Pakistan is in the phase of a concentrated epidemic, routine antenatal screening of HIV is not conducted.9 The current study was planned to determine the frequency of HIV among pregnant women reporting for antenatal care at a tertiary care hospital.

The sample size was calculated by taking the prevalence of HIV among pregnant women 1.7%,7 confidence interval of 95% and margin of error 1.1%. The sample was raised using non-probability consecutive sampling technique from among women reporting to the antenatal clinic. Those included were aged 15-40 years with a gestational age of at least 10 weeks confirmed by trans-vaginal/trans-abdominal scan performed by a trained sonologist or ultrasound technician. Those excluded were menopausal women, confirmed by the reported age and history of cessation of menses for at least 1 year, women having systemic diseases, confirmed by relevant laboratory investigations, like tuberculosis (TB), leprosy, systemic lupus erythematosus and syphilis as these diseases may produce false positive (FP) results. 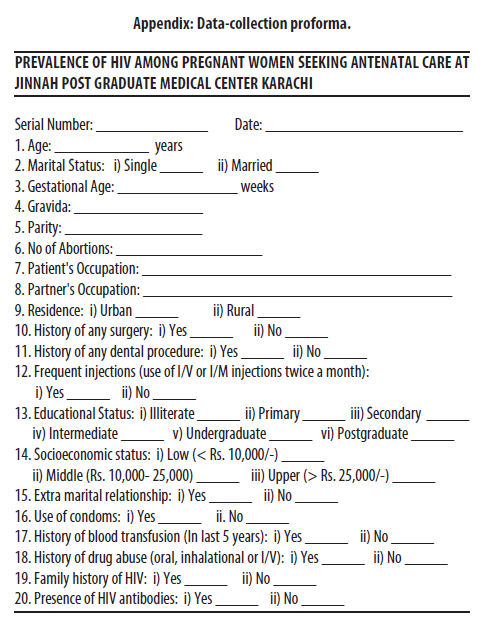 All the antenatal patients who visited JPMC during the course of study were randomly distributed in 5 chambers, numbered 1-5. Those meeting the inclusion criteria were offered antenatal testing for HIV, and those who agreed to furnish informed consent on the basis of pre-test counselling were included.

Blood samples were collected and tested for HIV antibodies using the WHO-approved HIV Rapid test kits that have sensitivity and specificity 100% and 99.9% respectively.18 Data was analysed using SPSS 21. Descriptive statistics were calculated for all variables. Continuous variables, like age, gestational age, gravidity, parity and number of abortions, was presented as mean ± standard deviation. Categorical variables, like residence, education level, socioeconomic status (SES), history of any dental procedure, history of any surgical procedure, frequent use of injectable, described as use of IV or intramuscular (IM) injections twice a month, use of condoms and family history of HIV/AIDS, marital status, patient's and partner's occupation, extra-marital relationship, blood transfusion in the preceding 5 years, drug abuse via oral, inhalational or IV mode, and the presence of HIV, were presented as frequencies and percentages. Stratification was done on the basis of HIV results. To determine the association, chi-square test was applied. P<0.05 was taken as significant. 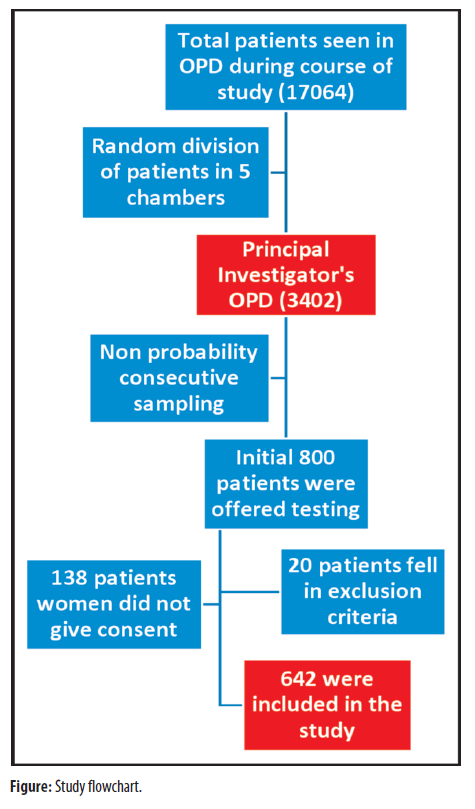 There was significant association of HIV with family history of HIV and with history of drug abuse (Table).

The current study showed significant positive association of HIV with family history of HIV and history of drug abuse, which is similar to the results of other national studies.9,19

HIV infection during pregnancy can have serious consequences on maternal and foetal outcome.20,21Attempts for prevention and management of HIV and PMTCT can reduce maternal and perinatal morbidity and mortality.22 Prompt treatment and providing pregnant women access to HIV testing can result in the reduction of adverse pregnancy outcomes because of HIV.23 HIV is an epidemic in Pakistan and there is a threat of its expanded outbreak because of lack of awareness, taboo associated with it, and lack of testing facilities.24 Majority of the pregnant women have poor knowledge regarding HIV, its prevention and transmission. It is, therefore, important to provide knowledge regarding HIV and MTCT, and to simultaneously know the HIV status when women visit antenatal clinics.25

The current study has limitations as it was conducted at a single centre for a short duration with a small sample size.

A national study regarding HIV prevalence is required for general antenatal population. HIV screening should be carried out in routine at the time of antenatal booking, especially in the high-risk population.

Screening of HIV during the antenatal period is a useful tool to diagnose HIV-positive women as this might be the only time a woman visits hospital owing to the local socio-cultural restraints. A detailed history is required to identify a high-risk individual by maintaining strict confidentiality and an empathic attitude. Screening of HIV will further lead to the provision of optimum treatment to HIV-positive women, leading to decreased ratio of vertical transmission. Hence, its transmission and spread can be prevented.