The rising rates of obesity and cardiovascular disorders, especially in female university students, have become a global problem. A healthy cardiorespiratory system is necessary for having a good quality of life (QOL). A large-scale study on university students from 22 countries found a prevalence of overweight and obesity in several regions of the world ranging from 3% to 59%.1

The cardiac system supplies oxygenated blood to the whole body. Any type of fluctuation in any chamber of the heart causes a serious problem. A cardiac patient may have ailments, like hypertension (HTN), tachycardia, angina, blockage in any coronary artery, fibrillation, flutter, and myocardial infarction (MI). These aetiologies are directly linked to obesity.2 There is a direct relationship between obesity and cardiovascular disorders (CVDs). The cause of obesity is the storage or collection of low-density lipoprotein (LDL) in the body that directly stimulate CVDs. The rate of obesity and overweight was particularly higher in university students.1 Increase in the rate of cardiorespiratory disorders is directly proportional to the increase in body mass index (BMI) that has an inverse relation with QOL. BMI below the normal range in females means greater risk of osteoporosis, non-regulation in the menstrual cycle, and weak immunity.2 Cardiorespiratory fitness (CRF) is the main component of physical fitness defined as 'ability of a body to perform dynamics, large-muscle exercise for a prolonged period at moderate to high intensity".3 Normal CRF and bodyweight are necessary to have a good QOL. From college to university, the transition is the most difficult period accompanied by unfavourable weight-gain and decreased cardiovascular and muscular fitness due to unhealthy lifestyle and behaviour leading to poor QOL.4

CRF refers to the ability of the circulatory and respiratory systems to efficiently supply oxygen to the working muscle to sustain physical therapy.5 CRF can be measured by using a variety of exercise models, such as treadmill, cycle ergo-meter, step test and running.6,7

In adult students, an increased rate of obesity, especially in university students, has become a global problem, affecting both the developing and the developed countries.8 In Pakistan, the ratio of underweight and overweight was particularly high in university students.9 In Pakistan, studies confirmed the presence of a significantly high rate of obesity/overweight in medical student as well as in the general population of Asia.10,11 Studies showed that one in every four female undergraduates in Pakistan was Underweight.12 Higher BMI was associated with an increased incidence of cardiometabolic disorders (CMDs).9 On the other hand, females below normal BMI level have a high risk of osteoporosis, menstrual irregularities and weak immunity.2

CRF means that BMI and aerobic capacity are closely related to the risk of CMDss and negative health outcomes.3 Oxygen consumption (VO2) is considered the most accepted parameter to measure maximum CRF capacity. Recent systematic reviews have shown a correlation between low QOL and negative health in university students.13,14

Physical therapy (PT) students, due to their nature of work, must have better CRF and overall health, but reports of low fitness in PT students and lack of emphasis on these topics at the entry-level PT curriculum have been noticed.15 CVD, being the number one cause of death worldwide, refers to any disease that affects the cardiovascular system.16 It was estimated that 175 million people died due to CVDs in 2012, representing 30% of all global deaths. Compared to obesity, the impact of CRF on human health has often been ignored, even though it appears to be one of the most important determinants of overall health status and a powerful predictor of CVD mortality and morbidity.5,17

The current study was planned to explore the correlation of BMI and CRF among female PT students.

The cross-sectional study was conducted from October to December 2020 at Ali-Ul-Murtaza Department of Rehabilitation Sciences, Muhammad Institute of Medical and Allied Sciences, Multan, Pakistan. After approval from the institutional ethics review committee, the sample size was calculated using the Yamane formula18 at 95% confidence level and 5% margin of error. The sample size was raised using non-probability convenience sampling technique. Those included were undergraduate female PT students aged 17-25 years. Those who were post-graduates, having any type of physical disability, having a history of chronic illness related to cardiorespiratory ailments, and those reporting with a history of chest pain, bronchitis and asthma were excluded.

After taking informed consent from the participants, they were subjected to the Physical Activity Readiness Questioner (PAR-Q), while QOL was measured using the World Health Organisation Quality of Life-Brief version (WHOQOL-BREF).19

Further, exercise-induced stress tests were performed under the supervision of a woman medical officer and senior physiotherapist. A 20-metre shuttle run test was used for measuring CRF. Participants ran from one corner to another 20m apart while keeping pace with a pre-recorded beep.22 When a participant failed to maintain the pace, the test was stopped. The number of shuttles was recorded. Blood pressure (BP), heart rate (HR), rate of respiration (RR), oxygen saturation (VO2-max) and temperature were noted before and after exercises.

The subjects were encouraged by the instructor to give their maximal effort during the test, and those who could not achieve 85% of age-predicted HR were excluded.19

Objective measures of data collection, such as HR, BP, RR, VO2-max, and temperature were calculated through these stress-inducers.9 VO2-max was determined with the formula:

After exercise, the temperature was expected to increase up to 1°C in the participants which was to normalise after attaining homeostasis.24

Data was analysed using SPSS 20. Descriptive statistics, such as frequencies and percentages, were used to evaluate the characteristics of each participant for categorical variables, and mean and standard deviation (SD) for continuous variables. Pearson's correlation coefficient was used to determine association between the values of continuous variables and Spearman's correlation coefficient for ordinal variables. P<0.05 was considered statistically significant. 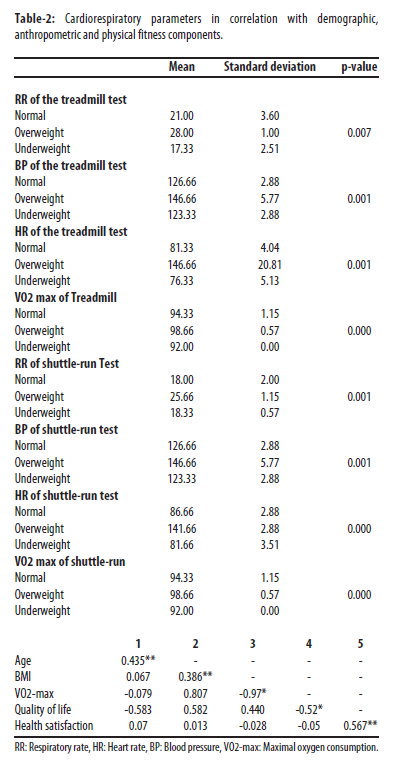 BP, HR, RR and VO2-max values were noted after each test and on each count there was significant correlation with overweight (Table-2; Figures-1-3). 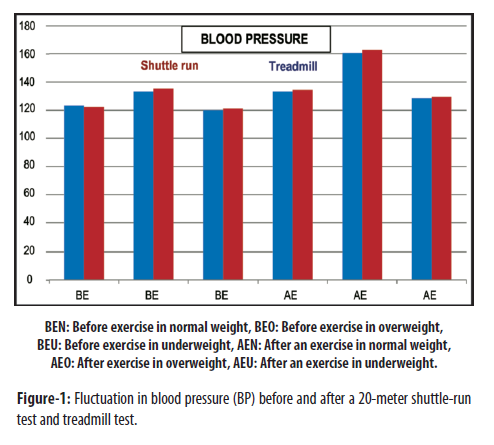 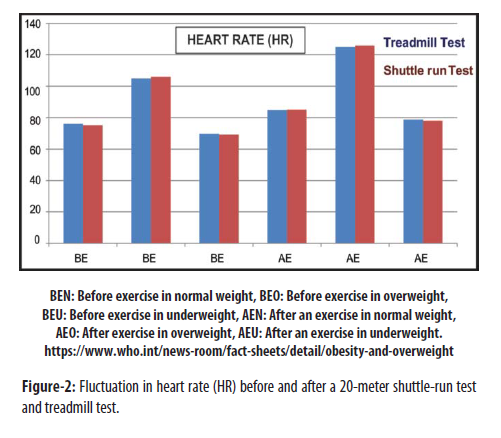 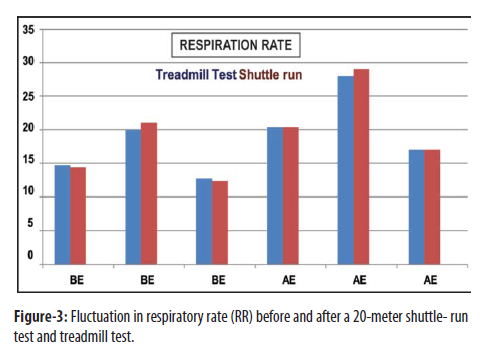 The current study found a significant negative correlation between BMI and subject's QOL. The majority of participants in the sample size were overweight on the basis of BMI, and recent studies from Pakistan and Asia support the finding,10,17 suggesting that the rising trend was due to a sedentary lifestyle, socioeconomic shift, unhealthy food choices, lack of physical activity, and sleep changes.12,13 The mechanism behind this effect may be that due to muscle work, glucose is utilized and lactic acid is formed, demanding more oxygen to clear the oxygen debt, causing rise in RR and this demand of adenosine triphosphate (ATP) causes the stimulation of sympathetic system of autonomic nervous system, releasing noradrenaline from sympathetic nerve endings and adrenaline from the adrenal glands.3 These stimulates b1 receptors, causing cardio-acceleration5 When biochemical energy is converted to mechanical energy, conversion rate is up to 30%, and the remaining energy is dissipated in the form of heat, causing rise in body temperature, which, in turn, causes the activation of sweat glands releasing the water as sweat on the body surface.9 The vaporisation of sweat causes cooling of the body surface to maintain the temperature at 37°C.

The current study used standardised protocols and validated tools which has increased its validity. Future studies on CRF and body mass composition should be conducted with larger and multi-centre samples with subjects from different educational backgrounds.

The prevalence of overweight in undergraduate female PT students was high. Physiotherapy students are expected to have a high level of CRF because of the nature of their work, but CRF in overweight female students was below the acceptance level.

10.     Jafar TH, Chaturvedi N, Pappas G. Prevalence of overweight and obesity and their association with hypertension and diabetes mellitus in an Indo-Asian population. CMAJ 2006;175:1071-7.

13.     Dyrbye LN, Thomas MR, Shanafelt TD. A systematic review of depression, anxiety and other indicators of psychological distress among US and Canadian medical students. Acad Med 2006;81:354-73.

20.     WHO expert consultation.Appropriate body-mass index for Asian populations and its implications for policy and intervention strategies.THE LANCET .2004;363:157- 163