Radicular cyst is the most common type of odontogenic cyst associated with the apex of non-vital teeth. The lining of the radicular cyst usually arises from the epithelial rests of Malassez. These cyst usually persists even after the elimination of microbial load from the root canals. Surgical removal is deemed necessary for the management. For larger lesions extending to the facial or palatal cortical plates, additional regenerative procedures such as bone grafting along with collagen membrane are warranted. This case report describes the surgical and prosthetic management of a giant radicular cyst that was perforating the cortical plates in the anterior maxilla.

Radicular cyst is the most common inflammatory odontogenic cyst of tooth bearing areas of the jaw. It is an epithelial lined pathologic, hollow cavity, which may or may not contain fluid. It is associated with apex of an erupted non-vital tooth, which progresses from a periapical granuloma into a cyst.1 The inflammatory remnants from the necrotic tooth stimulate the epithelial rests of Malassez to proliferate and form lining of the cyst. The cyst occurs as a result of the long standing necrotic tooth which may remain static, regress or increase in size to occupy a large volume of the jaw bone.2 These cysts usually appear between third and the sixth decade of life with male predominance. The incidence of the true radicular cyst (without opening between root canal space and cyst lumen) is 8%-13%.3-5

Radicular cysts are commonly asymptomatic, and are noticed incidentally on radiographs. However, some chronic lesions that become symptomatic can present with swelling, mobility of the teeth and displacement of unerupted teeth. In the maxillae, it can manifest as expansion of buccal or palatal cortical plates.6

A general agreement among authors is that true peri-apical cysts are self-sustainable and have the tendency to persist even after elimination of the source of stimulation which is microbial load in the root canal space. This entails that the surgical intervention is unavoidable for such lesions.5-7 Endodontic surgery is the choice of treatment to conserve and manage the affected teeth. Also the larger lesions such as more than 2.5 cm are deemed critical size lesions and that have an unpredictable prognosis for complete bone regeneration.8,9Regenerative techniques, consisting of filling the enucleated lesion with the physiologic bone substitutes and covering the exposed cortical plates with the barrier membranes, have been suggested to enhance the status of bone regeneration specially in larger and through-and-through (tunnel) lesions.10,11

The present case report is regarding surgical and prosthodontics management in a middle aged female who was diagnosed with a giant radicular cyst associated with maxillary anterior teeth perforating the buccal and palatal cortical plates.

A 36-year-old, otherwise healthy female, visited the dental clinics of Aga Khan University Hospital Karachi, in April 2018 with the chief complaint of pain around the upper front teeth associated with on and off swelling for the past few years. Her dental history revealed that she had trauma to the upper front teeth due to fall in her childhood. She went to a dentist for seeking dental treatment and got one root canal done, one extraction and a fixed type prosthesis was placed for the replacement of missing anterior tooth. Since then she had multiple episodes of pain and swelling in upper jaw both bucally and palatally. Patient's oral hygiene was satisfactory.

On clinical examination, a faulty metal ceramic bridge was found to be cemented on the upper front teeth. A splinted five-unit bridge cemented from tooth # 13-22 (FDI) was observed. There was mobility in the bridge as well as tenderness on palpation both buccally and palatally near apex of tooth #22. On routine radiographic examination (Orthopantomogram), there was a missing tooth #12, broken down tooth #22, root canal treated tooth #21, metal ceramic-crown on #26 and intact amalgam fillings in teeth #36 and #37. Radiographically, there was a well-defined radiolucency associated with tooth #21 extending towards the roots of adjacent teeth. Cone Beam Computed Tomography Scan was offered and a massive radiolucent lesion was observed extending from tooth #11 to #23, measuring 14.3 X 14.6 X 11.2mm. Clinical and radiographic findings were suggestive of periapical radicular cyst (Figure-1). The patient was informed about the diagnosis and treatment options. 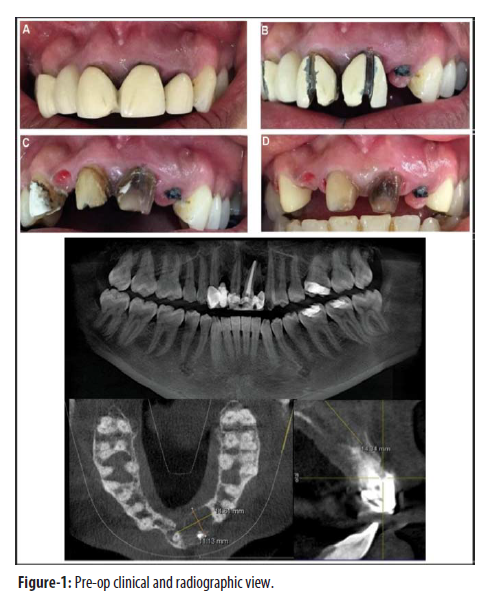 The following treatment plan was suggested to the patient:

4. Metal-ceramic bridge #13-11, #21-23 (provided abutments were found to be healthy upon removal of the faulty prosthesis)

After discussion, patient opted for the treatment and the informed consent was signed.

Case Management: An impression was made to form a vacuum formed stent prior to the removal of the bridge. This was done to fabricate provisional prosthesis that has to be used at a later stage. The first step was done in April 2018 was to remove the faulty prosthesis that was extending from tooth #13 to #22. This procedure was carried out under local anaesthesia: comprising 2% lidocaine with 1:100,000 epinephrine. Diamond bur in high speed handpiece using air water spray was used to section the prosthesis. Bridge was removed and it was observed that tooth #22 was broken down and had poor prognosis. On the same day, under local anaesthesia (2% lidocaine with 1:100,000 epinephrine) two cartridges of 2.2ml, full thickness muco-periosteal triangular flap was raised for appropriate visualization, and access extending from tooth #11 to #24. The bone in the periapical region of tooth #22 was paper thin with through and through bucco-palatal defect extending uptil the nasal floor. (Figure-2) The necrotic bone was removed using currettes and osteotomy was enlarged using large round diamond bur until clean healthy bony margins were reached followed by copious irrigation and curettage to gain access to the cystic area. The cyst was exposed and the lining scraped off to remove the remnants to prevent reoccurrence. The enucleated cystic lining and contents were stored in 10% formalin solution and sent for histopathological examination. A straight fissure diamond bur was directed perpendicular to the long axis of the tooth root #21 and apical 3mm was sectioned to expose the gutta percha in the canal. Saline was used to irrigate the cavity to remove blood and debris. Retrograde preparation was done using conventional endodontic surgical instruments and the cavity was filled with reinforced zinc oxide eugenol based interim restorative material (IRM, Dentsply, USA) to form fluid tight apical seal. Access material was removed and a periapical X-ray was taken to confirm apicoectomy and retrograde seal. 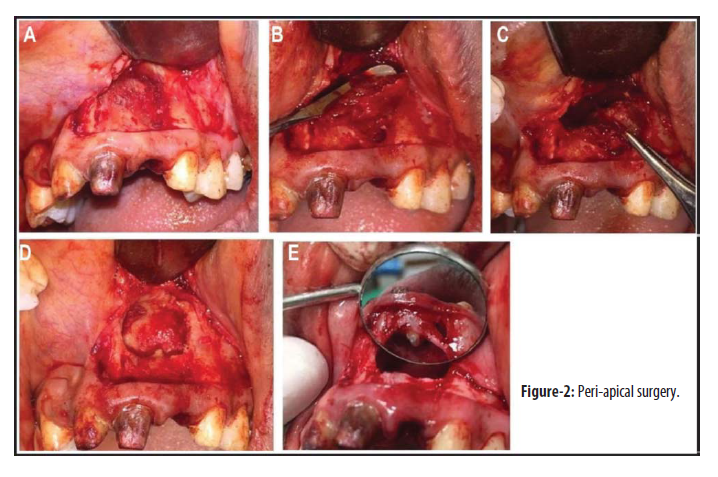 Tooth #22 was extracted and the surgical site was cleaned with saline. The osteotomy was large, thus bone grafting was needed. Biomend Extend™ Membrane (Zimmer-Biomet, USA) was placed palatally and also on the opening of tooth socket. Two grams -particulate type wet bone allograft (Rocky Mountain, USA) was placed over it to fill the defect followed by another layer of Biomend Extend™ Membrane on the top labially to stabilize the graft. The flap was sutured back to its place using 3-0 vicryl sutures in simple interrupted fashion (Figure-3). 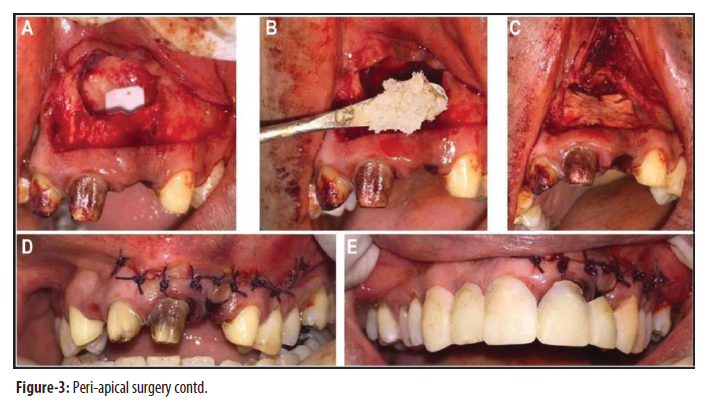 To avoid a phase of toothlessness, margins of the adjacent abutment teeth were prepared and a temporary bridge extending from tooth #13-11 and #21-23 was fabricated chairside, with Integrity Temporary C&B Material (Dentsply, USA) and cemented with eugenol-free luting cement (Freegenol, GC, USA). Post-operative instructions and antibiotics were given to the patient. The patient was called after one week for follow-up and suture removal.

On her 7th day of follow-up, the patient was doing well and the healing was good. Sutures were removed and the patient was called after a week for endodontic and restorative work.

After one week, single visit root canal treatment was done of tooth #13, 11 and 23. There were no complaints by the patient. The soft tissue healing was complete. The histopathological report confirmed the lesion as a peri-radicular cyst.

Three months after the surgery, when the tissues were stabilized, impressions were taken for definitive bridge from tooth #13-11 and #21-23. The subsequent visit was for metal casting trial and the final porcelain fused to metal ceramic bridge was delivered in June 2018. 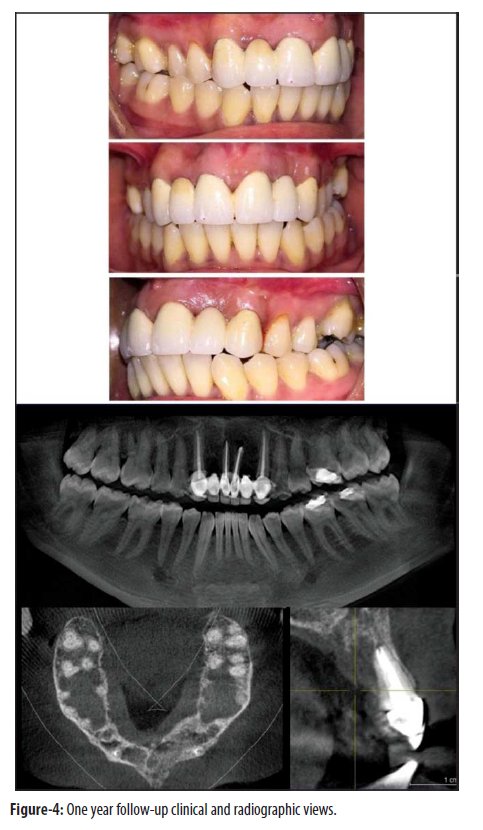 The current case had a rare presentation of an extensive defect extending from upper right central to upper left lateral incisor, approaching the nasal floor. Such cases are usually chronic, progress slowly, leading to mobility of teeth, but in our case there was absence of tooth mobility or root resorption and the lesion remained silent.12 Appropriate radiographs and histopathological evaluation is necessary for diagnosis of such giant lesions, therefore CBCT evaluation was warranted.13 According to the CBCT, tooth #21 had adequate quality of root canal treatment, associated with a well-defined radiolucent lesion measuring 14.34x14.61x11.13mm lined with radiopaque borders. The treatment of choice depends upon the size and location of the lesion. In this case, conservative minimally invasive procedures were not an option.14 The missing buccal and palatal cortical plates allows fibrous connective tissue proliferation and growth into the bony defect, thereby hindering bony formation and leading to scar formation resulting in incomplete healing.10 According to Pecora et al.,15 large bony through and through lesions should be treated with periapical surgery with Guided Tissue Regeneration (GTR) procedures in order to promote the regenerative healing process and to prevent proliferation of undesired cell populations in to the defect yielding successful outcomes. Taschieri et al.16 concluded that GTR as the management of through and through lesion shows 88% success rate as compared to management without GTR. Thus, in this case it was decided to use Rocky Mountain Particulate Bone Allograft along with Biomend Extend™ Membrane.

Sub marginal incision technique was used to raise a full thickness muco-periosteal flap as it is preferable in the aesthetic zone to avoid gingival recession.17 Conventional method of using curettes to remove the infected soft tissue and separate the cystic lining from the bony crypt was used. This had to be done cautiously in order to avoid perforation of the delicate nasal floor.18

According to the criteria of Von Arx and Kurt, the present report shows a successful outcome after one year follow-up. There is resolution of signs and symptoms, bony healing of the large defect which was accompanied by loss of labial and palatal cortical plates.19

Compared to the conventional non-invasive procedures for the management of large periapical lesions associated with lower success rates, GTR has improved prognosis in such cases. Based on our one year follow-up, it can be concluded that GTR procedures lead to successful healing outcomes in cases of extensive cystic lesion affecting both buccal and palatal cortex of the jaw bone.