Role of virtual reality and active video games in motor and executive functions in cerebral palsy: A systematic review

Objective: To explore current evidence on the role of virtual reality and active video games in motor and executive functions compared to conventional physical therapies in cerebral palsy patients.

Method: The systematic review was conducted at the University Institute of Physical Therapy, Lahore, Pakistan, and comprised search on MEDLINE via PubMed, Pedro and Cochrane Central related to randomised and clinical controlled trials published from 2005 to 2020. For critical appraisal of the studies, the Pedro tool was used, while methodological quality assessment was done using the Cochrane risk of bias tool.

Results: Of the 15 articles reviewed, 14(93.3%) reported significant effect of virtual reality and active video games on motor functions. Critical appraisal found the quality of the studies from fair to high. Low risk was found in 4(26.7%) articles in terms of selection, 3(20%) allocation, 6(40%) detection, and 8(53.3%) had attrition bias. Unclear risk was reported in the performance and reporting bias domain in all the 15(100%) articles.

Conclusion: Virtual reality games cannot be used as a substitute for therapy, but along with the conventional physical therapy, they are very effective and produce significant changes in motor functions in cerebral palsy patients. As for executive functions, more research needs to be done to determine the impact of these games at a higher level of brain.

Neurological disorders are the most prevalent, complicated and expensive diagnoses affecting children health, wellness, growth and development throughout their lifespan promoting childhood disability.1

Cerebral palsy (CP) is defined as an umbrella term covering a group of non-progressive, but often changing motor impairment syndromes secondary to lesions or anomalies of the brain arising in the early stages of its development.2

CP has a great influence on the everyday life of the young, and children struggle at different levels throughout their life with CP, like struggling to flourish at the academic level, having trouble in socialising, coming across less job opportunities etc. Therefore, the primary objective of interventions should be to foster self-sufficiency and health of CP children by incorporating suitable measures.3

In addition to conventional care and rehabilitation of CP patients, new interventions have been applied recently, precisely the use of games within the intervention.3 In actual fact, these games provide constructive, situational and experiential learning opportunities in addition to active game exploration.3 Studies highlighted the probability of entertaining games as an appealing and exciting approach to develop and enhance valuable skills.3 Therefore, new categories of games are emerging that can be used as rehabilitation tools.

Among these games, two applications, active video or exergames, and virtual reality (VR) games, are described in greater detail. Interactive simulations in VR applications are sensitive to user's movements, which enable a child to perform and learn functional activities while interacting in a virtual environment that appear to be and feel similar to real-world objects and events.4 Some researchers have learned that attention, memory and executive functions, in general, can be improved by playing video games, meaning games played on computers or gaming platforms, like Nintendo, Sony PlayStation etc.3,5

VR games and applications produce an exercise environment for children with the feasibility to modify duration, intensity and frequency of practice. VR games can create an environment-friendly space that is similar to the real world in which the children can perform task-specific practices.4 Task challenges can be easily modified in a VR environment to provide a child with ample difficulty while playing.

There are no clear recommendations and guidelines about active videogames and VR as motor intervention available to assist clinicians, families and other stakeholders in making decisions about the use of these games. The current systematic review as planned to gather sufficient evidence about VR and active video games available that have been used in CP, the role of these games in motor functions of upper and lower extremities, executive functions, transferal of learning of these skills to real-world environment, and to assess the strength of the available evidence, achievement of outcomes and impact on quality of life (QOL).

The RCTs and CCTs included were published in peer-reviewed, professional or scientific journals which used any form of VR or active video games on CP patients, had a standardised assessment tool, and outcomes related to motor and executive functions. Feasibility studies, pilot studies, editorials, commentaries or case series were excluded. The methodological quality assessment of the studies was done using the Cochrane risk of bias (ROB 2) tool and the studies were critically appraised using the Pedro scale.6,7 Data was synthesised using the vote counting method which also concluded the effect of the studies. Meta-analysis was not feasible due to heterogeneity between the included studies. 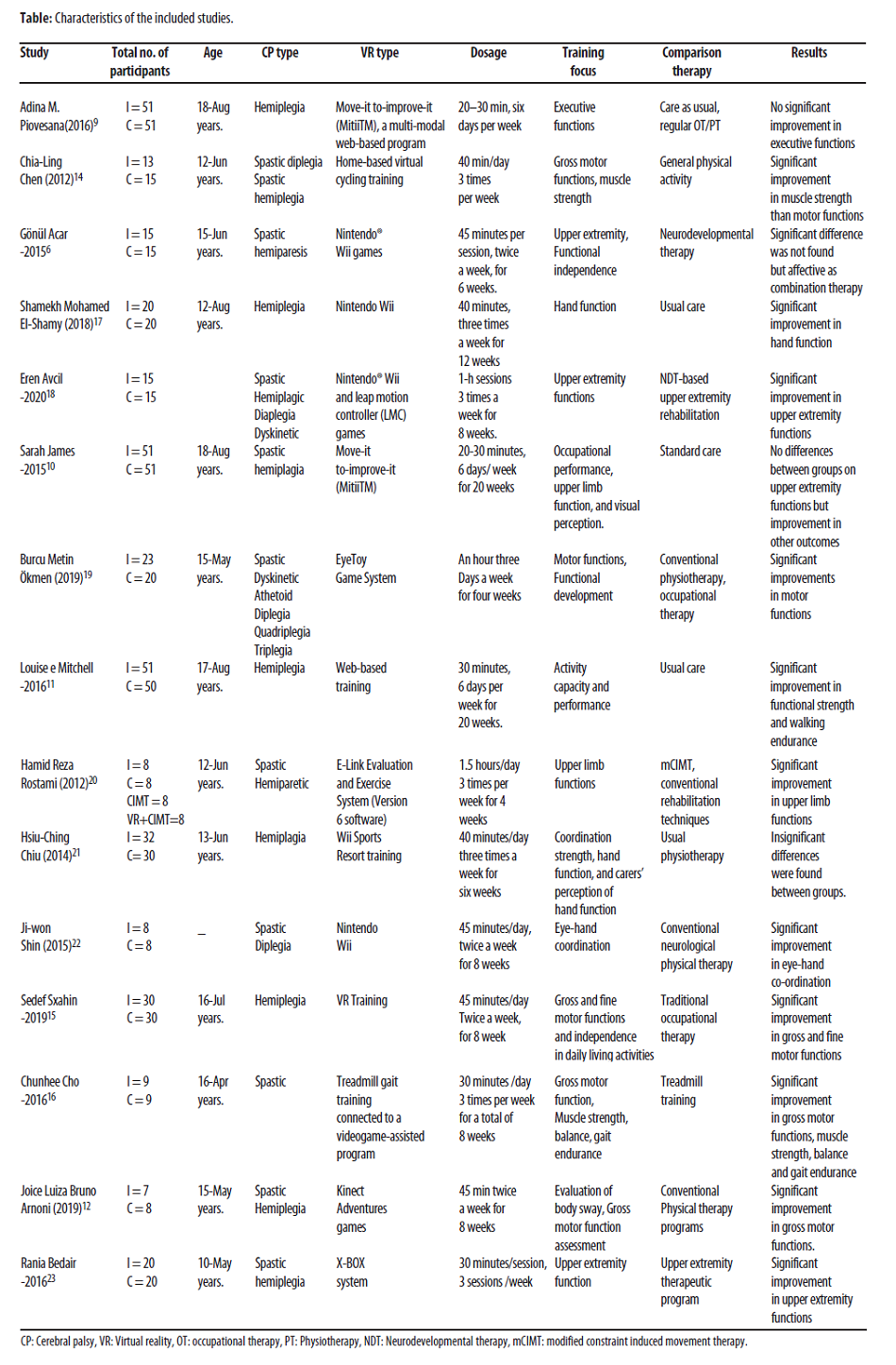 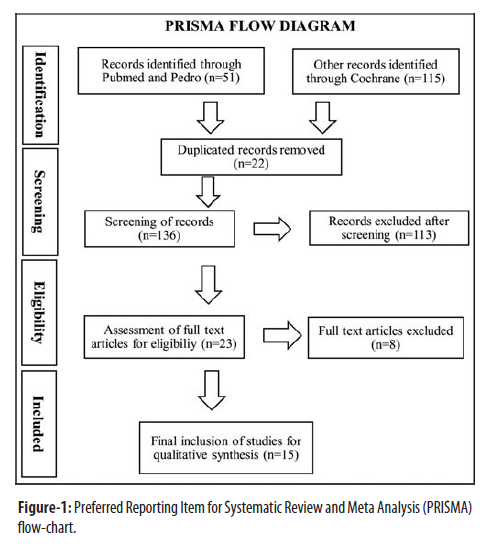 Different outcomes and outcome measures were categorised into motor and executive functions. Most researches utilised Nintendo Wii games as a therapy along with conventional physical therapy in their sessions. Other VR games used in these trials were Mitti, Xbox, Microsoft Kinect and Eye Toy for different motor functions (Figure-2). 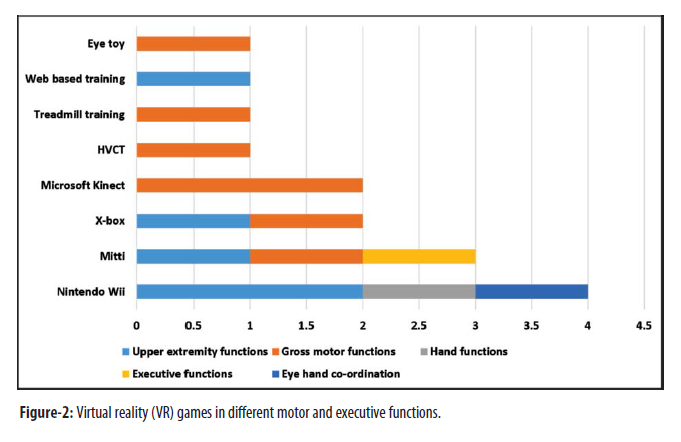 Duration of each session varied from 20 to 90 minutes and 2-6 times per week were required to produce constructive outcomes. Low risk was found in 4(26.7%) articles in terms of selection, 3(20%) allocation, 6(40%) detection, and 8(53.3%) had attrition bias. Unclear risk was reported in the performance and reporting bias domain in all the 15(100%) articles (Figure-3). 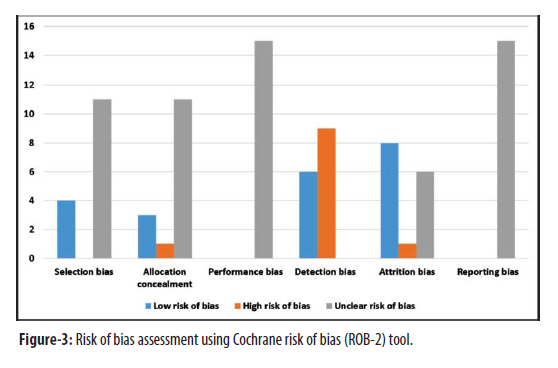 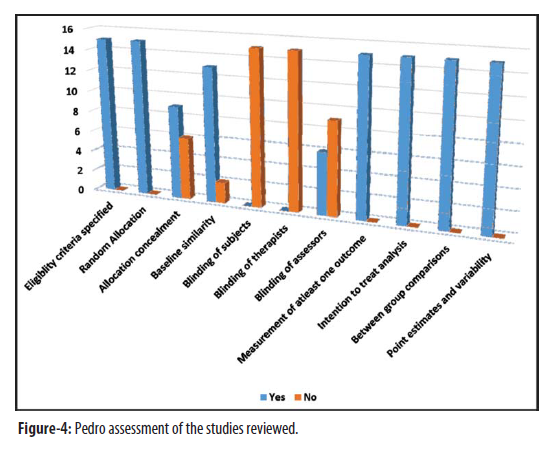 The current systematic review gathered evidence on the role of different active video and VR games in motor control and executive functions. Both are considered separate applications and have been in use for quite some time for different neurological disorders. These technologies differ in both type and technical complexity. There are a variety of technologies that can be used to implement virtual environments.

Nintendo Wii was found to be used in most of the trials reviewed and significant differences were found in motor functions. In two of these studies, neurodevelopmental therapy was used along with Nintendo Wii games to determine the effect in CP patients specifically, upper extremity functions.8,9 One of the research concluded that neurodevelopmental treatment is effective for improving hand function, but Nintendo Wii games used in addition to the therapy provide enjoyable, motivational and effective rehabilitation programme.10 According to different studies, Nintendo Wii can be used in rehabilitation to engage children and make activities fun.8,10

Mitti, Xbox and MS Kinect had also been used in several RCTs. Mitti was used in three of these trials, and two of them determined the effect on upper extremity functions, visual perception, activity capacity and occupational performance, while one focussed on executive functions.12-14 The study on executive functions concluded that due to large RCT, Mitii did not lead to significant improvements on measures of EF (executive functions) or parent ratings of EF performance in children with UCP (unilateral cerebral palsy).12 However, in an appropriately-powered RCT, Mitii led to substantial improvements in daily activities, motor and processing skills, occupational performance, goal attainment and visual processing in UCP children. There were no differences between groups on measures of impaired upper limb function, but Mitii has the potential to be a beneficial component of the therapy for UCP children.13

In two RCTS, Xbox and MS Kinect was used to determine the effect of VR games on body oscillation, motor functions, upper extremity functions and activities of daily living (ADLs). These studies concluded that interventions using VR games are a promising tool that can improve gross motor functions, increase active participation of children with motor deficits in majority of upper limb activities through simulating environment and enhance their participation through self-competing activities.15,16 RCT utilising novel home-based virtual cycling training (hVCT) programme stated that the programme did not improve gross motor function, but it enhanced knee muscle strength in children with CP.17

Four RCTs found substantial improvement in gross motor functions after using different VR games and applications.15,17-19 Overall, on the basis of current research, as described above, VR and active video games along with standard physical therapy are very efficient and effective treatment for improving gross and fine motor skills in CP patients. However, more research needs to be done on the effect of these games in executive functions.

Going through all the trials, it was observed that all VR games had different duration in their therapy sessions and did not have a standard dosage or duration. But minimum duration was 30 minutes, 2 times per week for 12 weeks. According to Pedro scoring, many of these RCTs and CCTs were of high quality and described the efficacy of these games along with conventional physical therapy. But ROB 2 reported unclear and high risk of biasness in its different domains in different studies.

The systematic review found that different VR and active video games were utilised in various studies, but mostly Nintendo Wii was used as a therapeutic programme in the VR sessions. Significant improvement in different motor functions was observed, but not many studies were found or major changes were reported related to the executive functions. VR games cannot be used as substitute to the conventional therapy, but when used along with conventional physical therapy, it can be very effective in producing significant changes in motor functions. More well-designed studies are needed to determine the effect of these games on executive functions.