Objective: To investigate the mutation in Vangl1 gene in patients of myelomeningocele.

Method: The cross-sectional study was conducted from July 2017 to December 2017 in the Dow Diagnostic and Research Laboratory, Karachi, after approval from the ethics review committee of Dow University of Health Sciences, Karachi, and comprised clinically diagnosed infants and 10 healthy individuals from the outpatient department of Jinnah Postgraduate Medical Centre, Karachi. Several anatomical parameters were considered, such as size and site of the cyst. Blood samples were drawn and polymerase chain reaction was conducted for the identification of mutation in Vangl1 gene. Mutation analysis was carried out by aligning the sequence with the reference sequence.

Results: Of the 60 subjects, 50(83.3%) were cases with age range 0-10 years, and 10(16.6%) were age matched controls. Majority of the patients 44 (88%) were aged <1 year. Novel mutation in Vangl1 gene was identified at position 239, showing the substitution of valine with glycineV239G. Lumbar region was the most common site for the presentation of myelomeningocele in most of the patients 46(92%).

Conclusion: The rare mutation of myelomeningocele was found present in the sample, and the disease was found mostly in the lumbar region.

Congenital anomalies are defined as structural and developmental defects that manifest themselves during intrauterine life and can be diagnosed prenatally at birth or later in life. Birth defect is the fourth most common cause of neonatal deaths.1 Neural tube defects (NTDs) are the birth anomalies that occur due to improper closure of the neural tube.2 It can be categorised on the basis of the site at which the lump is located. NTDs could be cranial (anencephaly, craniorachisis) or spinal NTDs (spina bifida).3 Spina bifida can be presented as closed or open. Closed spina bifida (occulta) results from failure of union of posterior vertebral arches, but the neural tissue remains intact.4 In comparison to this, the open spina bifida is relatively severe, leading to lifelong disabilities. Open spina bifida could be of two types; meningocele and myelomeningocele (MMC). In meningocele, it is only the meninges which protrude through the sac,5 whereas in myelomeningocele, meninges along with the neural elements bulge out through the sac.6 It affects 1 in 1,500 livebirths in the United States.7 MMC is associated with other diseases, like Arnold Chiari malformation and hydrocephalus,8 and also linked with several orthopaedic abnormalities, like talipes, hip dislocation, kyphosis and scoliosis.9

NTDs are multifactorial, having the involvement of several genes as well as environmental factors.10 Research has failed to find significant cellular or molecular mechanism leading to NTD. Genetic studies have revealed several genes to be involved in the pathogenicity of the disease. Among which Vang/gogh/Strabismus (Vang/Stbm) is noteworthy. Vangl/Stbm is one of the core planar cell polarity genes.11 The planar cell polarity(PCP) pathway is essential for the subsequent closure of the neural tube in which the constriction of the apical surface of neuroepithelial cells occurs due to which the cells get transformed into cone shaped. This will promote the bending of the tissue needed for the closure of neural tube.12

VanglStbm were initially recognised in drosophila into which its purpose is related to the development and function of eye, wing and bristles.13 It consists of two paralogues, Vangl1 and Vangl2. Many researchers have shown missense mutations in Vangl1 and Vangl2. Kibar et al.14 and Barstch et al.15 showed that mutation in Vangl1 and Vangl2 will lead to NTDs. Structurally, Vangl1 and Vangl2 genes encode similar four-pass transmembrane cell surface proteins having intracellular cytoplasmic amino and carboxy terminal region with two similar discontinuous extracellular loops. Human Vangl1 and Vangl2 are 68% identical and although the Vangl lack any known enzymatic activity, they contain important protein-protein interaction domains: AC terminal coiled domain and a PDZ-binding motif.16 It has been seen that expression of Vangl1 gene is limited to midline floor plate cells and to notochord.17

The current study was planned to analyse the occurrence of mutation in Vangl1 gene in patients of myelomeningocele.

The cross-sectional study was conducted from July 2017 to December 2017 at the Dow Diagnostic and Research Laboratory, Karachi, after approval from the ethics review committee of Dow University of Health Sciences, Karachi, and comprised clinically diagnosed infants and 10 healthy individuals from the outpatient department of Jinnah Postgraduate Medical Centre, Karachi.

The patients were selected regardless of gender and socioeconomic or ethnic background. Other cases of NTDs, like anencephaly and craniorachisis, were excluded. Patients were examined for the presence of lump on vertebral column. After taking informed parental consent, 2mmol/L blood was taken by a trained phlebotomist. Deoxyribonucleic acid (DNA) extraction was done using spin column method and was carried out from whole blood by QIAmp DNA micro kit (Qiagen, Germany). It was followed by polymerase chain reaction (PCR) amplification of Vangl1 gene. The PCR was performed in a tube which contained a reaction mixture of 20ml comprising the following components: 10pmol of each forward and reverse primer for Vangl1 gene, 500mM of 4deoxynucleotides, 2U of Taq polymerase (Promega), 10 x PCR buffer containing and 1.5mM magnesium chloride (MgCl2). Thermal cycler (Master Gradient PCR System, Eppendorf AG, Germany) was used to incubate the sample initially for 10min for 95°C followed by 35 cycles consisting of 94°C for 30s, 64°C for 1 minute and 72°C for 1 min, with the final extension being for 10 minutes at 72°C. The PCR-amplified products were distinguished by electrophoresis on a 2% agarose gel stained with ethidium bromide and examined under a transilluminator. The dimension of PCR-amplified product was measured according to the migration pattern of a 50bp DNA ladder (Gibco BRL Life Technologies). It was seen using gel documentation system and then a photograph was taken. The amplified product was of 404bp. It was then sent for commercial sequencing. Mutation analysis was carried out by aligning the sequence with the reference sequence.

Molecular analysis showed substitution of valine to isoleucine in 2 (4%) samples, whereas in 1(2%) sample, valine stood substituted with glycine.

V239G mutation was identified in sample #6. A seven-month-old boy had a myelomeningocele cyst at the lumbosacral region (Figure-2). No sign of NTD was seen in any family member. The mother had not taken folic acid during pregnancy. She was informed by the doctor concerned about the disability of the baby prenatally. 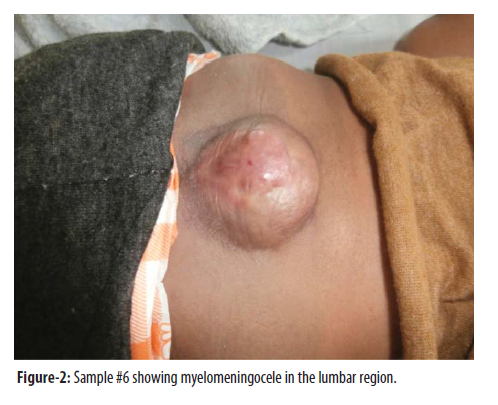 The V239G mutation was present at the specified region of exon 4 of Vangl1 gene and amplification was observed at 404 base pairs (bp) as shown in Figure 1 and was confirmed by DNA sequencing. 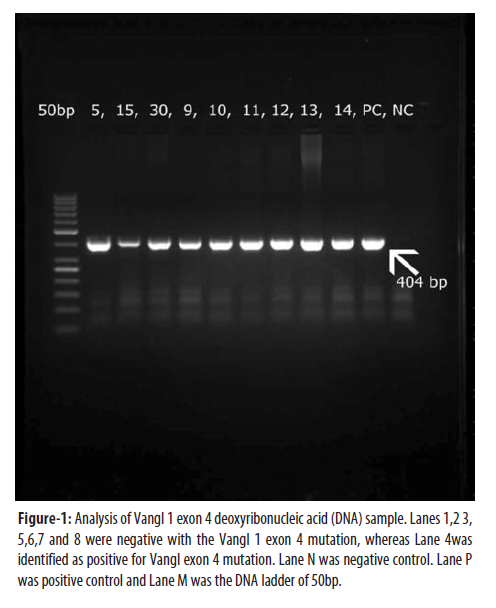 The predicted outcome manifested the substitution of valine with glycine at position 239 in the sample (Figure-3 and 4). 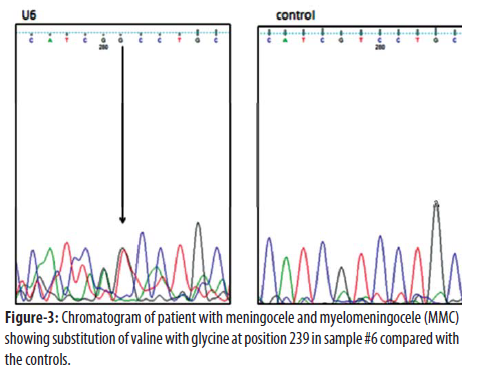 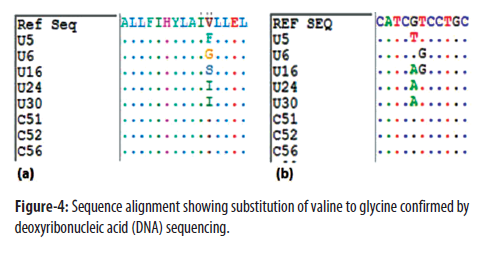 The lumbar region was the most common site for the presentation of myelomeningocele 46(92%).

The V239G mutation identified in the current study is a novel mutation of Vangl1 gene in patients of myelomeningocele as it has not been reported previously.

The current study found that most of the patients (92%) presented with lump on the lumbar region, which is in line with literature.20-22

Chunquan Cai et al. analysed missense single nucleotide polymorphisms (SNP) rs4839469 c.346G > A p.Ala116Thr and rs34059106 c.1040A > C p.Glu347Ala of the Vangl1 gene in 135 NTD cases and 135 normal controls. They found that the Vangl1 gene sequence at the rs4839469 locus exhibited Ala116Thr and Ala116Pro polymorphisms, and allele and genotype distributions were significantly different (p=0.036 and p=0.010) between the case and control groups. Thus, the rs4839469 allele of Vangl1 was linked with NTDs.23 Torban E etal found that genetic association between Vangl1 and Vangl2 genes would lead to NTDs and increase the possibility that interaction between individual Vangl genes, other genetic loci and/or environmental factors may contribute to causation of NTDs.17 Kibaretal14 identified three mutations in the gene; V239I, R274Q and M328T. In a cohort of 810 patients suffering from NTD, the gene was sequenced, and 8 missense mutations were identified both in familial (V239I, R274Q, S83Land R181Q) and sporadic (M328T, F153S, L202Fand A404S) cases. Bartsch et al carried out direct sequencing of the Vangl1 gene and found three different heterozygous missense mutations (p.Arg173His, p.Arg186His, and p.Gly205Arg) in 3 of 144 unrelated patients with various forms of NTDs from Slovakia, Romania and Germany.15

An unusual mutation was found in Vangl1 gene in the current sample which has not been reported before. Healthcare providers should consider it while counselling expectant mothers about the potential risk of the disease. Further exploration and detection for NTDs should be undertaken in future.

Disclaimer: The text is based on an M.Phil (Anatomy) thesis.