Objective: To assess musculoskeletal disorders among male cricketers in an urban centre.

Conclusion: The most affected anatomical segments were lower-back, shoulder, knee, ankle and upper-back.

Cricket is among the most popular games in the world just after soccer. In Asia, cricket is rapidly growing in Pakistan which has put physical demands on players to train hard and perform well with increased playing hours and less recovery time. Physical fitness, skill, movements and approach are involved in cricket. To improve skills and movements, players must ensure their fitness and strength.1

The playing roles in cricket, including batsman, bowler, all-rounder, and wicketkeeper, are associated with the risk of injury.2 Musculoskeletal disorders (MSDs) occur in a variety of ways, like lethal bouncer or a ball striking a player, collisions, rotational movements, diving and overuse injuries.3 Cricket is one of the most commonly reported activities that lead to active sports injuries.4

P. Sathya et al. reported that 61% people experienced musculoskeletal problems while playing cricket.5 Stretch et al. reported that lower-limb (49%), upper-limb (23%), back and trunk (23%) were the most affected anatomical segments of the body.6 Orchard et al. reported the prevalence of injury 14% for pace bowlers, 4% for spin bowlers, 4% for batsmen, and 2% for wicketkeepers.7 There is a lot of research available at the international level, but only a few are present in Pakistan on sportspersons. The current study was conducted to assess MSDs among cricket players of domestic clubs in a Pakistani urban centre, and frequency of injuries based on the playing roles.

The cross-sectional study was conducted from October to November 2020 in Lahore, Pakistan. After approval from the ethics review board of Jinnah Hospital, Lahore. the sample size was calculated using Open-Epi v22.8 at 95% confidence interval (CI), 10% margin of error and expected proportion of MSDs as 36%.9

The sample was raised using non-probability convenience sampling technique. Those included were male cricket players aged 10-25 years of 4 local cricket clubs which were the Green Cricket Club, the Nawab Cricket Club, the Ittefaq Cricket Club, and the Township GymKhana. Players who had already suffered MSDs were excluded. Informed consent was taken from the subjects, or from the parents in case of minors, and permission was obtained from respective club authorities.

Data were analysed using SPSS 24. BMI was calculated by using the criteria set for the Asian population by WHO i.e. whose cut-off value for normal BMI is ≤23 kg/m211. Frequency and percentages were calculated for qualitative variables, while mean and standard deviations were calculated for quantitative variables. Cross-tabulation was done between risk factors and MSD as well as its impact, and chi-square test was applied keeping p< 0.05 as statistically significant. 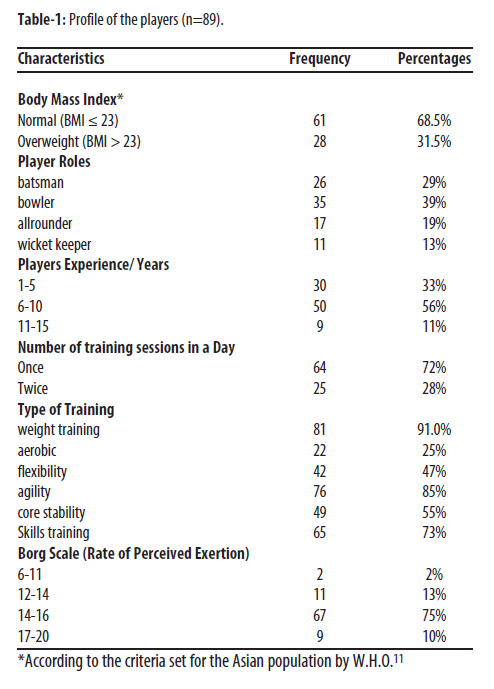 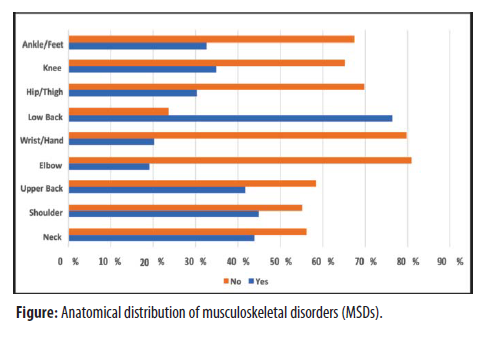 There were 22(24.7%) players who had at any time seen a doctor or a physiotherapist, while 24(27%) players had a history of taking sick leave from work due to trouble during training (Table-2).

Only 1(1.1%) player had been hospitalised due to a serious problem and had to quit playing cricket actively due to the trouble he had faced in the field.

The difference in history of MSD among players with normal BMI and those who were overweight was not significant (p=0.21). Type of training and role of the player also showed no significant relationship with MSD (p>0.05) (Table-3). 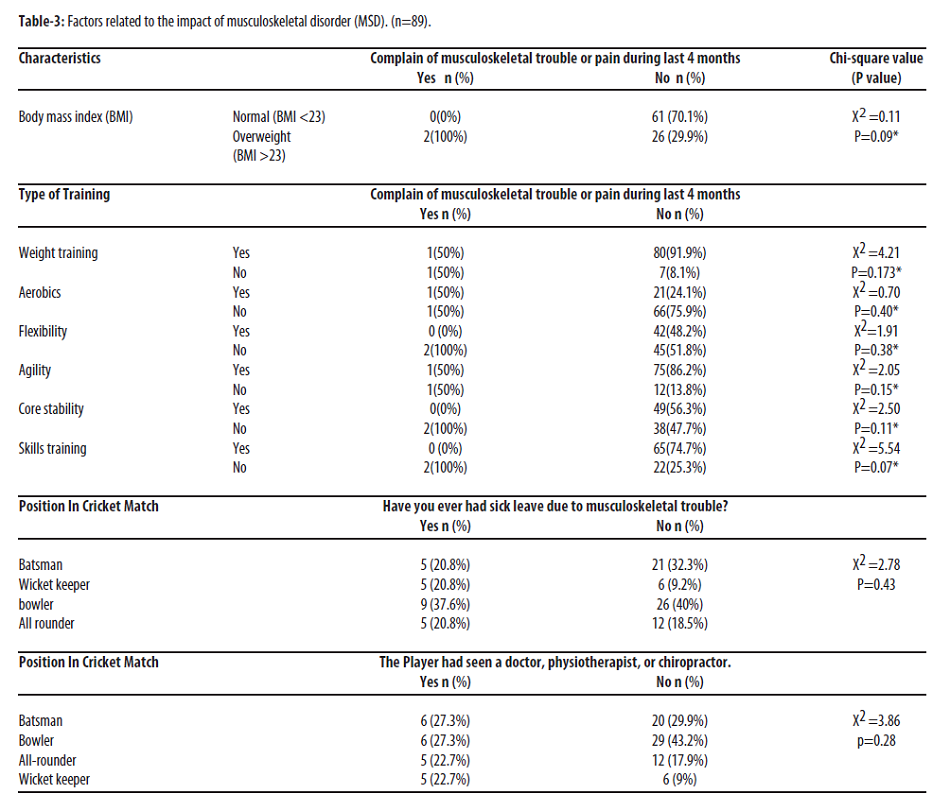 Among the 89 cricketers age 10-25 years surveyed, 85(95.5%) had experienced MSD during the preceding 12 months. Even though there was no significant difference in terms of the role of a player on the field in the current study, a study mentioned that biomechanically, the bowling activity applies a huge measure of power onto the spine, which causes injury.12 A study in South Africa reported injuries among bowlers (39.3%%) to be higher than any other position.13 Injuries to lower anatomical segments are a consequence of exposure to uneven ground, improper shoe-fitting, faulty follow-up technique during bowling and running between the wickets.13

International studies reported that a high level of lower-back problems was a consequence of the repeated movement of the lumbar segment before the ball release while bowling, and pulling the ball offside during batting.13-16 Boob Woolmer found that knee pain was experienced often by batsmen and wicketkeepers because of the improper repeated uncontrolled movements that overexert during forward and backward propulsions which increase pressure and tension on peri-articular structures during patellar retraction and knee extension.17

A study suggested that due to repeated kneeling and flexion position of the knee during play, wicketkeepers suffer from knee pain recurrently.3 By incorporating strength, endurance and conditioning into training regimens, the risk of injury can be reduced.3

The current study has limitations, like a small sample size and the use of self-reporting questionnaire.

The frequency of injury in young cricketers was high. Coaches, doctors and physiotherapists should play their role to reduce the chances of injuries among the cricketers.

16.    Stretch R. Cricket injuries: a longitudinal study of the nature of.