Mammary Analogue Secretory Carcinoma (MASC) is a rare pathology of the salivary gland, most commonly involving the parotid gland. The objective of this study was to identify the characteristic features of MASC and its treatment outcomes. A retrospective review of 12 patients with histological diagnosis of MASC, who were managed between 2010 to 2019, was carried out at the Shaukat Khanum Memorial Cancer Hospital & Research Centre, Lahore. Their mean age was 34±16 years. There were 9 (75%) male and 3 (25%) female patients. Painless slow growing swelling was the most common presenting symptom. All the patients had undergone surgical excision with or without neck dissection, followed by adjuvant treatment. Of these, six patients had T2 tumours, while four had cervical lymph node metastasis. The mean follow-up period was 23±21 months. Local recurrence was seen in one patient. MASC is considered a low-grade tumour with good prognosis which can be treated with curative intent of surgery followed by radiotherapy effectively.

Mammary analogue secretory carcinoma (MASC) is a rare pathology arising in the salivary glands. It has been recognised recently and is most commonly seen in the parotid gland.1 It resembles the genetic and histopathological features of an equally rare pathology of the breast secretory carcinoma (SC).2 Skálová et al in 2010 described MASC as a separate entity, and later on it was included in the fourth edition of the World Health Organisation's (WHO) classification of head and neck tumours.1-7

Histologically it is a distinctive entity, and the use of certain immunohistochemical stains (IHC) help making the diagnosis. However, the histopathological features of these tumours overlap with other salivary gland pathologies, such as low grade mucoepidermoid, acinic cell carcinoma and adenocarcinoma.8 It is associated with a translocation t(12;15) (p13; q25) resulting in the fusion gene ETV6-NTRK3. This translocation is commonly seen in secretory carcinoma of the breast, although it is not common in other salivary tumours.7,9,10 A chimeric tyrosine kinase is encoded by the fusion gene which plays a major role in carcinogenesis due to its potential transformation activity.8

More than 200 case reports and series have been reported in the literature till now. Previous studies have suggested that MASC are more commonly seen in men and presents as painless mass, gradually increasing in size. IHC stains are positive for epidermal growth factor receptor, S-100 protein and vimentin in MASC, whereas oestrogen receptor, progesterone receptor and Human Epidermal Growth Factor Receptor 2 (HER2) are negative.3

Surgical resection is the treatment of choice. Literature shows few patients who have received adjuvant radiation and chemotherapy as well. The recurrence rate is low and the overall and disease-free survival is excellent; therefore, the clinical course of MASC is considered favourable.13 The main objective of the current study was to identify the characteristic features of MASC and its treatment outcomes as well as the prognostic factors affecting it.

Prior exemption for this study was sought from the Institutional Review Board (IRB) and data was collected in October, 2020. Twelve patients with histological diagnosis of MASC from 2010 to 2019 were retrospectively analysed. All patients with histologically proven diagnosis of MASC arising from the Parotid gland being treated with curative or palliative intent at Shaukat Khanum Memorial Cancer Hospital & Research Centre, Lahore, were included in the study. Patients with distant metastasis, incomplete treatment, who were lost to follow-up or with incomplete data were excluded.

Table-1 summarises the characteristic and clinical features of the patients included in the study. Twelve patients were identified with the final diagnosis of MASC of the parotid gland from 2010 to 2019. The patients were between 20 to 78 years of age at the time of diagnosis with the mean age being 34±16 years. There were 9 (75%) male patients as compared to 3 (25%) female patients. All 12 (100%) patients presented with slow growing painless swelling of the parotid gland, while 3 (25%) patients complained of occasional pain at the site of swelling. Only 1 (8.3%) patient presented with facial nerve weakness at the time of presentation.

Pre-operative work up was performed in all the patients which included radiological imaging and FNAC. FNAC revealed MASC in majority of the patients. Adenoid cystic carcinoma, Adenocarcinoma, and Acinic cell carcinoma were reported in one patient each.

The treatment modality selected for all patients was surgery, followed by radiotherapy. Superficial parotidectomy was done in one patient as MASC was confined to superficial lobe, while eleven patients underwent total parotidectomy. Neck dissections were performed on seven patients, out of which level I - III and level II-V were done in one patient each, level II - IV neck dissections were performed in the remaining patients. Five patients had mild temporary facial nerve weakness postoperatively. Postoperative radiotherapy was given to all patients with curative intent except for one patient who was treated with palliative intent.

The mean size of the tumour was 2.63±1.66cm. The Eighth edition staging system of the American Joint Committee for Cancer (AJCC)14 was used to stage the disease. Six patients had T2 tumours followed by size T3 tumour in 4 patients. Four patients were reported to have cervical lymph node metastasis, 2 patients had N2b disease, whereas 2 patients had N1 disease. Overall, stage II disease was seen more commonly in our patients. Half of the patients had surgically positive margins on final histopathology. Lymphovascular invasion was reported in 2 patients, whereas perineural invasion was reported in 1 patient.

All the patients were classified as low-grade carcinoma except for two who were graded as high-grade carcinoma. Extracapsular spread was not identified on any of the final histopathology specimen. Histologically, the tumours showed large cells with abundant cytoplasm, small nuclei arranged in solid and microcystic growth pattern (Figure-1). 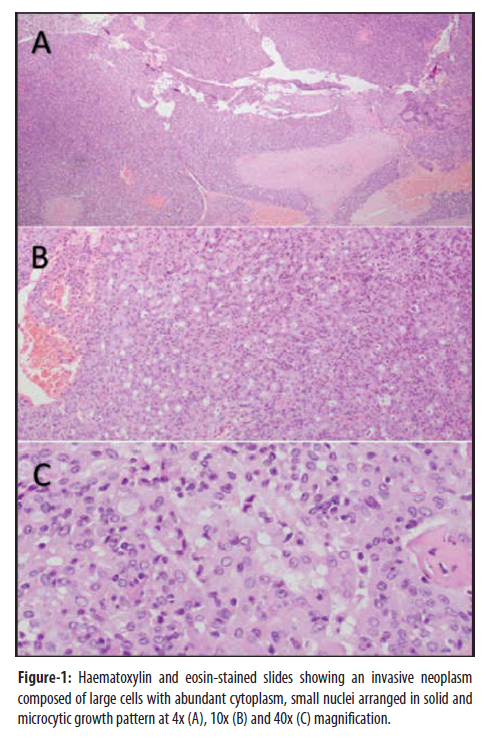 The tumour's cells were negative for p40 stain and showed adequate cytoplasmic staining for Mammaglobin and strong expression with GATA immunohistochemical stain (Figure-2). 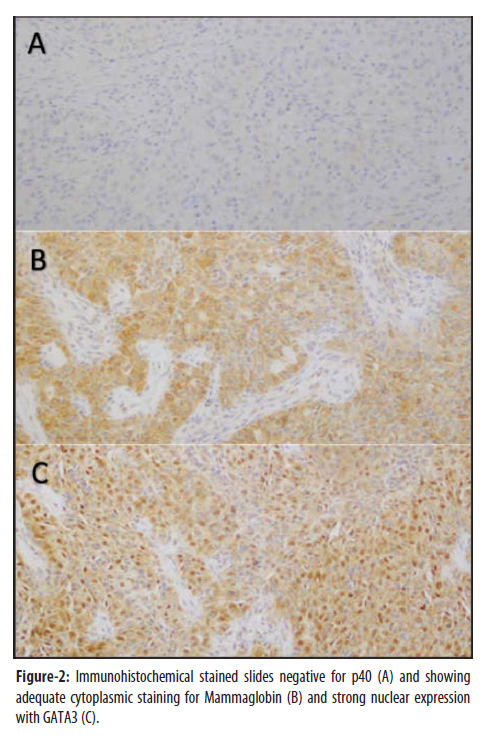 All the patients included in the study were followed-up postoperatively. The follow-up period ranged from 12 to 78 months with the mean of 23±21 months. Recurrence was seen in one patient at 48 months in the local parotid region and salvage surgery with wide local excision was done.

The study showed MASC is a low grade salivary gland tumor treated effectively with surgery followed by radiotherapy. The risk of cervical and distant metastasis is low with an excellent overall and disease free survivall.

The evolving role of digital media in medical education