Objective: To determine the factors related to low bone density in postmenopausal women with rheumatoid arthritis.

Method: The prospective cross-sectional study was conducted at the Rheumatology Department of Fauji Foundation Hospital, Rawalpindi, Pakistan, from June 1 to November 30, 2020, and comprised postmenopausal women with rheumatoid arthritis. On the basis of dual-energy X-ray absorptiometry scan of total hip, femoral neck, and lumbar spine, the subjects were categorised into osteoporosis, osteopenia and normal bone density groups. The risk factors were compared across these subgroups. Data was analysed using SPSS 21.

Osteoporosis (OP) is a silent epidemic that has an enormous impact on patient's morbidity and mortality as well as on health infrastructure. OP is an early common feature of rheumatoid arthritis (RA), which appears in two forms during the disease process. OP secondary to inflamed joints is a characteristic phenomenon of initial and long-term rheumatoid disease. Generalised OP affects the axial and peripheral bones.1 Cross-sectional studies reveal that the bone mineral density (BMD) of the spine and hips of RA patients is lower compared with healthy people.2 OP increases the likelihood of fragility fractures in the spine, hip joints and other parts, which lowers lifespan and increases morbidity in comparison to the general population. In contrast to primary osteoporosis, patients with RA have a greater risk of fractures, and even after the initiation of the "treatment to target" (T2T) strategy, the OP risk does not decrease.3

The National Institute of Health (NIH) Consensus Development Group defines osteoporosis as a systemic bone disease described by impaired strength of bone, which causes fractures. This in turn is reflected by the combination of both density and quality of bone.4

According to studies, the incidence of OP in RA patients is twice that of the normal population. In an RA patient, the incidence of OP was 12.3% to 38.9% at the lumbar spine and 6.3% to 36.3% at the hip.5 Every year OP leads to 8.9 million fractures. In other words, an osteoporotic fracture occurs every three seconds.6 In Pakistan, the reported prevalence of osteopenia is 34-72.9%, and that of OP is 2.4-30.9%.7

The clinical diagnosis and OP evaluation are usually based on the assessment of BMD through a dual X-ray absorptiometry (DXA).8,9 DXA is a key modality to evaluate BMD in most RA patients. Fracture risk assessment (FRAX) is a tool utilised to analyse fracture risk in postmenopausal women.8 Association has been established between high FRAX and duration of disease, menopause, health assessment questionnaire (HAQ) and the 28-item disease activity score (DAS-28).10

RA is a longstanding debilitating disease presented by symmetrical, progressive and erosive arthritis.8 Studies estimate that 0.5-1% of worldwide people is afflicted by RA, which makes RA second only to osteoarthritis and gout in terms of causing disabilities.11 In Pakistan, evidence indicates that the prevalence of RA in women in Karachi is 0.142%.11 It has been reported that high disease activity, glucocorticoid (GC) therapy, inactivity, advanced age and low weight are risk factors for OP in RA patients.12 Similarly, females are also at higher risk. Inflammation is one of the key causes of bone resorption and leads to local and generalised OP.12 The autoantibodies, such as rheumatoid factor (RF) as well as anti-citrullinated protein autoantibodies (anti-CCP), are risk factors for erosions and low BMD in RA.13,14 Improved disease control may promote remodelling of bone metabolism, thereby making normal bone structure not only in the joints, but also throughout the body, which consequently stabilises BMD.15

GC therapy is independently related to the increased OP risk in the hip and spine. In prolonged users, the cumulative dose of GCs can cause further bone-loss and lead to an increase in OP risk by at least twofold.16 It is reported that after 5-7 months of GC treatment, 25% trabecular bone is lost. GC treatment of RA can cause fractures and affect mortality, life quality, including physical function, and the risk of future fractures.17

Scant literature exists for OP frequency in RA patients and the associated risk factors in the Pakistani population. The current study was planned to determine the factors related to low bone density in post-menopausal women with RA in the local population.

The prospective cross-sectional study was conducted from June 1 to November 30, 2020 at the Rheumatology Department of Fauji Foundation Hospital, Rawalpindi, Pakistan, which is a tertiary care hospital, providing services to ex-Army servicemen and their families. After approval from the institutional ethics review committee, the sample size was calculated using the World Health Organisation (WHO) calculato18  with confidence level 95%, population DAS-28 mean 3.9, absolute precision required 1%, and population standard deviation 1.9.5 The sample was raised using consecutive sampling technique. Those included were postmenopausal women with RA according to the American College of Rheumatology and the European League Against Rheumatism (ACR/EULAR) 2010 criteria.19 Patients with history of rheumatic diseases other than RA or premenopausal were excluded. Also excluded were those with osteogenesis imperfecta, Marfan syndrome, untreated long-term hyperthyroidism, hypogonadism, Cushing syndrome, type I diabetes, primary hyperparathyroidism, early cessation of menses <45 years, longstanding poor nutrition status, absorption problem of the gut, long-standing kidney and liver disorders, haematological disorders, like multiple myeloma, lymphoma, leukaemia, and those on drugs like insulin, anticonvulsants, excessive thyroxine replacement, heparin, gonadotropin-releasing hormones agonists (GnRH).

After taking informed consent from the subjects, a thorough history was taken from all the participants. A detailed physical check-up, including musculoskeletal evaluation, was done and medical records were checked. Demographic details, as well as clinical features, such as body mass index (BMI), were noted. Patients' age, smoking or alcohol history, history of self or family fragility fracture, duration since menopause, previous oophorectomy / hysterectomy, BMD of lumbar vertebrae L1-L4, neck of femur T-score, total hip T-score, DAS-28, clinical disease activity index (CDAI) and oral GC use including dose, duration, current or prior user, cumulative dose (dose of GCs according to prednisolone × 364 × years /1000)20 were recorded for all study participants.

FRAX was used to calculate the 10-year likelihood of hip and major osteoporotic fractures. FRAX was suggestive of high risk with a 10-year probability of 20% for major osteoporotic fracture (MOF) or 3% for hip fracture.8,9 BMD of all the patients was systematically evaluated through DXA on the same machine (Hologenic Advance Point Core Bone Health Density Scanner, Model Discovery A). T score was to categorise BMD into three groups according to the WHO criteria:8 normal, osteopenia and osteoporosis. Baseline characteristics and demographics were compared across these three groups. All the investigations, including blood tests as well as DXA scans, were done free of cost.

Data was analysed using SPSS 21. OP frequency was calculated for various age groups. T scores of lumbar spine, femoral neck and total hip were calculated as mean ± standard deviation according to age. For categorical variables, chi-square test was used, while for quantitative variables, one-way analysis of variance (ANOVA) was used. Logistic regression analysis was used to analyse the link between OP and risk factors. P<0.05 was considered significant.

OP patients were older with lower BMI and longer duration since menopause than the other groups (p<0.05). DXA score of spine, femur neck and hip were also significantly higher (p<0.00) in those with OP (Table-1). 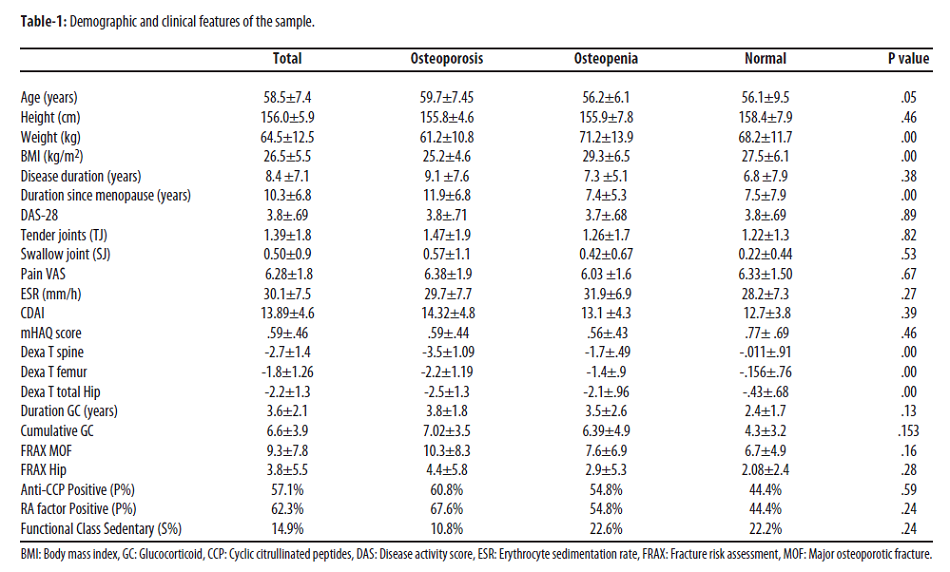 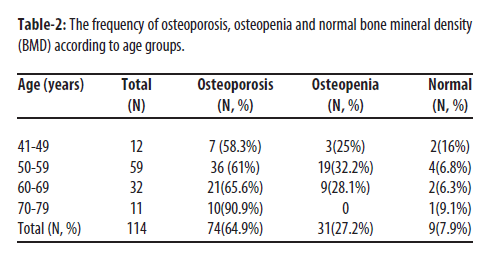 The spine, femoral neck, and total hip scores were evaluated according to each age subgroup, and those aged 70-79 years were found to have osteoporosis in all the three sites (Table-3).

Age and BMI were significant independent factors for OP, while none of the other factors revealed an independent link (Table-4). 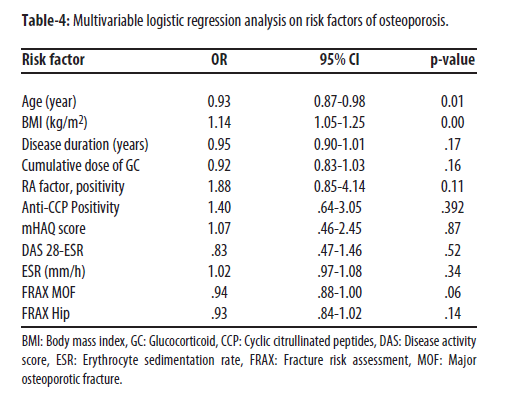 In the current study, OP was reported in 64.9%, which is higher than the reported 30.3-46.8%.5,21,22 The study population mostly consisted of elderly people which explains the higher percentage. As each study population has different features, the incidence of low BMD in RA patients cannot be easily determined owing to differences in age and gender, the status of menopause, activity and duration of the disease, GC use, genetics, geography, behaviour, economy etc.

In the current study, 10-year probability of major osteoporotic fracture (MOF) of RA was 9.3% vs 12%, and 10-yr probability of hip fracture was 3.8% vs. 3.8% in an earlier study23. The lumbar spine was the common site for OP in RA, followed by the femoral neck which was also observed earlier.21,24

In the current study, older age, low BMI and duration of menopause were significantly associated with OP, which was also observed in earlier studies5,21,22 However, in one study menopause did not have any significant effect on OP.13

DAS-28 and Clinical Disease Activity Index (CDAI) were moderate in the current study as was case in an earlier study13 but in both studies it was not significantly related to OP. The short disease duration likely avoids the detection of the deleterious effect of these variables on bone mass.13 In the current study, there was no association between ESR and BMD which is reported previously as well.24

RF, anti-CCP25 and the GCs were not significantly linked with OP in the current study, which is in line with literature,5,13,22,25 However, in a placebo-controlled study of RA patients, GC therapy, used to control inflammation, had a positive influence on BMD. This effect may cause BMD changes in response to GC therapy.5,13 The RA patients with OP in the current study had a longer course than RA patients without OP, which was reported previously.24

The mean cumulative GC dose was 6.6±3.9 which had a non-significant effect on the bone mass of the femur, hip and lumbar spine. This is contrary to the findings of one study.5 In the current research, smoking was not significantly related to OP, as reported earlier.5

It is worth mentioning that Pakistan has not yet established guidelines for OP patients. Therefore, RA patients, who carry a high risk of fractures, need to undergo screening for osteoporosis through BMD and FRAX regularly as set in international guidelines.26

The current study has limitations as there is predominance of the female gender, which is because the hospital deals with female family members of war veterans. The duration of the study was too short to assess the long-term impact of various OP risk factors.

Older age, low BMI and time since menopause were the factors significantly linked with OP, which was overall reported in 64.9% of RA patients.