Berardinelli Seip Congenital Lipodystrophy (BSCL) or Congenital Generalized Lipodystrophy (CGL) is one of the four subgroups of lipodystrophy syndrome which is characterized by varying degrees of loss of adipose mass in the body. It is an extremely rare autosomal recessive disorder and commonly reported clinical presentations include muscular hypertrophy, gigantism, hepatomegaly, impaired glucose tolerance, acanthosis nigricans, hypertriglyceridaemia, cardiomyopathy, intellectual impairment, bone cysts and phlebomegaly. We present a case of a 4.5 years old male child born to consanguineous parents, presented with pneumonia. There was history of recurrent diarrhea and chest infection in the past.  He had acromegaly like features, hirsutism, firm hepatomegaly, a well defined bone cyst in proximal right femur, pancytopenias with normal bone marrow biopsy report, hypertriglyceridemia and selective IgA   deficiency. This is the first case of BSCL, reported in Pakistan with a bone cyst and IgA deficiency. Such patients need to be identified and monitored for complications like diabetes mellitus and hypertrophic cardiomyopathy.

Berardinelli Seip Congenital Lipodystrophy (BSCL) is one of the four subgroups of lipodystrophy syndromes.1 Named after the two physicians who reported the first cases, it is a rare autosomal recessive disorder.2,3 About 500 cases of BSCL have been described in literature with fewer than 10 cases in Pakistan to date.2-6 The earliest genetically confirmed cases of Pakistani descent were reported in 2013 by Rehman et al. in a consanguineous family.6

On the basis of genetic alterations, four types of BSCL have been recognized as BSCL1-4 with their etiology linked to mutations in four distinct genes: AGPAT2, BSCL2, CAV1 and CAVIN1 respectively.7 The common feature in all these types is loss of metabolic adipose mass with consequent muscle hypertrophy and a characteristic body appearance. A diagnostic clinical criteria has been described in literature which includes major and minor criteria. The major criteria are lipoatrophy involving the face and trunk, hepatomegaly, hypertriglyceridaemia, acromegaly-like features and evidence of increased resistance to insulin; while minor criteria include hypertrophic cardiomyopathy, hirsutism, psychomotor delay, cysts in bones, precocious puberty especially in females and prominent veins of upper and lower limbs. The diagnosis of BSCL is suggested if three major or two major plus two minor criteria are fulfilled and/or a specific genetic mutation is identified.2 We report a case of a 4.5 years old child that fulfilled the clinical criteria of BSCL with a rare association of a bone cyst and selective IgA deficiency. This is the first case of BSCL reported in Pakistan with these findings.

A 4.5 years old male child presented at the Pediatric Medicine Department of The Children's Hospital, Lahore in January 2020 with complaints of progressive abdominal distension, pallor and epistaxis for 15 days. He had a history of repeated diarrhoea and chest infections since the age of three, for which he received oral medications in the past. His parents are first cousins and residents of Pakpatan district. Birth history was unremarkable. He had history of 3 siblings death; 2 sisters and 1 brother at the ages of around 4, 3 and 3.5 years respectively. The exact cause of death in siblings had not been established and the parents denied any history suggestive of BSCL in those siblings. On examination, his height was 110 cm (80th centile for age) and weight was 15 kg (10th centile for age) with BMI of 12.4 kg/m2. 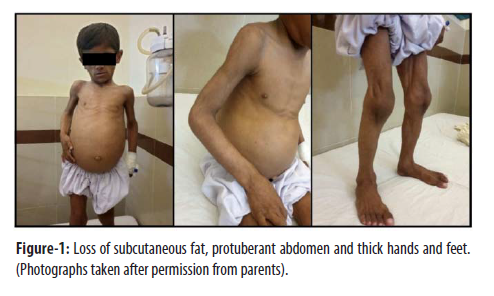 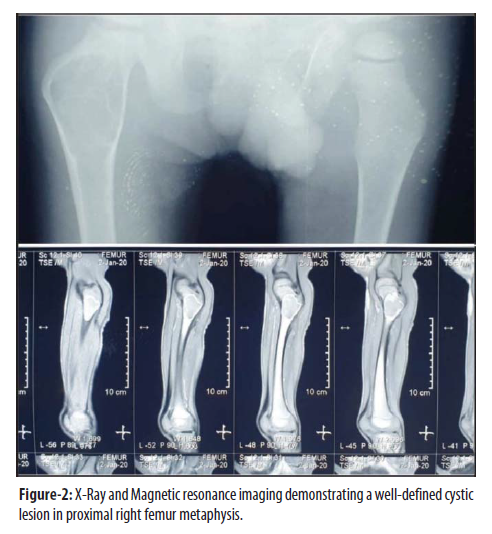 Echocardiography showed mild to moderate pulmonary hypertension. Serum immunoglobulin levels were normal with the exception of serum IgA level which was reduced (43.81 mg/dL). Liver biopsy was planned but the parents refused to give consent. Genetic testing could not be performed due to unavailability of genetic testing laboratory. He was managed with intravenous broad-spectrum antibiotics and supportive treatment for chest infection to which he responded. Pancytopenia improved and patient was discharged. As the clinical criteria were met by the patient and genetic testing is not mandatory for diagnosis, patient was diagnosed and treated as a case of BSCL.2 He was advised low fat diet and increased physical activity along with close monitoring of hypertriglyceridaemia. Currently patient is on follow-up in our department and no adverse or unanticipated events have occurred on follow-up. (Parental consent was obtained for publishing the data with photographs).

Clinically, four major and two minor criteria for clinical diagnosis of BSCL were met by our patient. We would especially mention the presence of a bone cyst in proximal femur. Initially, the presence of bone cysts associated with lipodystrophy and diabetes mellitus was thought to be a separate entity termed as 'Brunzell Syndrome'. However, genetic mutation analysis reported in these patients led to the consideration that bone cysts represent a rare association of BSCL.2 Bone cysts have previously been reported to occur in BSCL-1 but are very rare in BSCL-2 patients. The pathophysiology of these lesions has not been well-defined but suggested mechanisms include abnormal development of the fat-containing bone marrow with superimposed physical stress at epiphyses. These bone cysts may lead to pathological fractures or exhibit local pressure symptoms and do not require any surgical intervention otherwise.8 In our patient, the bone cyst was asymptomatic and hence, serial imaging was advised on follow up.

Another striking feature in our patient was the history of recurrent diarrhoea and chest infections. However, none of the episodes before the current admission prompted serious medical attention. This may be attributed to selective IgA deficiency found in our patient. To the best of our knowledge, no such association has been described in previous literature. Recurrent upper respiratory and skin infections were reported in a              6.5-years-old child in India but no definitive etiology was found. Abnormal polymorphonuclear and monocyte functions have also been reported in another earlier case study.9

Other commonly occurring complications in BSCL patients are diabetes mellitus, hypertrophic cardiomyopathy, hypertension, hepatic steatosis, delayed cognition and developmental delay.2 Echocardiography in our patient revealed moderate pulmonary hypertension but there was no evidence of hypertrophic cardiomyopathy. Patient is developmentally normal. There was hepatomegaly, but liver function tests were within normal range. Diabetes Mellitus is known to occur in 25-30 % of patients and the average age of onset has been described in the second decade of life; although rare cases of earlier onset have also been reported.10 Our patient had normal blood glucose and HbA1c levels; and no clinical sign of insulin resistance. However, we plan to follow on 6-monthly basis for development of symptoms of diabetes mellitus along with serial HbA1c monitoring. We also plan to do yearly echocardiography and 6-monthly ultrasound abdomen with liver function tests to look for hepatic fatty infiltration.

To date, no definitive treatment has been approved for BSCL. The management plan of these patients revolves around the clinical manifestations and basic pathophysiology i.e. loss of metabolically active adipose tissue and leptin deficiency which were the primary causes of metabolic complications. A leptin analogue called Metreleptin has been approved by United States Food and Drug Authority (FDA) for use in BSCL patients.2 Management in our patient included restriction of total fat intake to 20-30% of dietary caloric intake and enhanced physical activity. We also plan to include drugs like metformin in the treatment regimen if any signs of insulin resistance develop.

Although a specific genetic etiology has not been identified in our patient, physical features are consistent with BSCL. Index of suspicion should be high for BSCL when a patient with generalized lipoatrophy is encountered with or without manifestations of insulin resistance and diabetes mellitus. Once a diagnosis is suspected, monitoring of complications by a multidisciplinary team involving subspecialities is strongly suggested. Further research is needed especially in the areas of leptin replacement therapy and prenatal testing of BSCL.