Group influence on attitudes towards polio vaccination in Pakistan: Role of group identification and perceived group support for polio vaccines

Objective: To study the moderating role of perceived group normative support on the effect of group identification on scepticism and advocacy domains of attitude towards polio vaccination.

Method: The cross-sectional analytical study was conducted at the National Institute of Psychology, Quaid-i-Azam University, Islamabad, Pakistan, in June 2020, and comprised adult residents of Pakistan who were approached through online platform Psytoolkit. Data was collected by means of Attitude towards Polio Vaccination Scale, Group Identification Scale, and a measure of Perceived Group Normative Support for Polio Vaccination. Data was analysed using SPSS 21.

Conclusion: Group identity was found to influence attitudes towards polio vaccination in Pakistan by increasing the persuasive impact of perceived group normative support for polio vaccination.

Polio is a viral disease of children which can only be prevented through vaccination since it has no cure.1 Fortunately, the administration of oral live-attenuated poliovirus vaccine through the Global Polio Eradication Initiative (GPEI) has resulted in the elimination of polio from most countries of the world, with 80% of the world's population living in certified polio-free regions.1 However, polio still remains endemic in Pakistan and Afghanistan as these countries are struggling with the circulation of wild poliovirus type 1.2 Pakistan, more notably, reported the highest cases of polio globally in 2020.3

Significant barriers responsible for the persistence of polio in Pakistan are vaccine hesitancy and refusal by parents.4 These refusals reflect misinformed beliefs and negative attitude towards polio vaccines, which also manifests in the form of hostility and violent attacks on polio workers.5 Such serious implications associated with these attitudes necessitate their amelioration. This endeavour, however, can only begin after gaining adequate understanding about the nature of these attitudes.

Religious, geopolitical, and demographic concerns, reflecting threats to group identities, are the most commonly cited barriers to increasing polio vaccination rates in the literature available thus far.6 For example, polio vaccine refusals are common among individuals citing religious reasons7 and individuals belonging to certain ethnic groups, like Pakhtuns,8 therefore, affiliation with religious or ethnic groups seems to be associated with vaccine decision-making.

The concept of group identification (GI) has been derived from social identity theory,9 according to which groups help in defining self-concept of people and provide them with an identity. Group identification or the intrinsic desire to fit into a group makes people conform to expected standards or norms of that group, which are acceptable beliefs held by people of a group that maybe actual or perceived.10 Group norms are influential in the context of vaccination because research suggests that strong group norms which are supportive of vaccination reduce hesitancy and increase vaccine intentions in case of flu11 and coronavirus disease-2019 (COVID-19) vaccines.12 How this link operates in context of polio vaccines needs to be explored.

Attitudes towards polio vaccination might be affected since GI persuades people to adopt attitudes similar to their group norms13 which need to be assessed.

A detailed informed consent listing purpose of the survey, eligibility criteria for participation and instructions was provided on the welcome screen. Furthermore, the benefits of participation, voluntary nature of participation, rights of confidentiality, and rights of data protection were also conveyed. Finally, the participants were also provided the option to view a detailed score-sheet including automatically calculated scores on all variables and their meanings.

Convenient sampling method was used and an online link was shared with a total of 543 participants through email and Whatsapp. The final sample size was 310 consisting of data from participants who fully completed the survey.

A total of three measures were utilised to collect data. To determine attitudes towards polio vaccination, a 22-item measure constructed by the authors17 was utilised. The scale was scored on a six-point scale with following response options: 1= strongly disagree, 2 = disagree, 3 = slightly disagree, 4 = slightly agree, 5 = agree, and 6 = strongly agree. There were two subscales: Scepticism containing 14 items and Advocacy containing 8 items. High scores on Scepticism subscale (a=0.91) indicated doubts about the safety of polio vaccines, concern about their harmful effects, and belief in conspiracy theories about polio vaccines.17 High scores on Advocacy subscale (a=0.82) indicated belief in the effectiveness of polio vaccines and support for the vaccination campaign.17 For GI, a seven-item scale (a=0.91)18 was used. It measured participant's feelings of identification, commitment, liking, favourability, belongingness, fitting-in and group importance for sense of self on a 9-point scale ranging from 1 = not very much to 9 = very much. Higher scores indicated the strength of participants' GI with their group of choice. Finally, the measure for perceived group normative support (PGNS) for polio vaccination was inspired by the measure of descriptive norm about flu vaccination.11 The question was, "Based on your assumptions, what is the percentage of your fellow group members supporting polio vaccination?", and it was to be scored from among the five options: 0%, 25%, 50%, 75% and 100%. The referent group was selected by prompting the participants to choose from a range of options a group most important to their personal identity. High score on this question indicated that participants perceived majority of their fellow group members to be supportive of polio vaccines, or, in other words, they perceive their group norm about polio to be positive. Attitude Towards Polio Vaccination Scale (ATPVS) and Group Identification Scale (GIS) were pre-tested for evaluating their psychometric properties on a sample of 310 adults at Quaid-i-Azam University, Islamabad, from January to February 2020.17 As for the measure of PGNS for Polio Vaccination, four experts were requested to review it for the present study.

Data was analysed using SPSS 21. Descriptive statistics and Cronbach alpha reliability coefficients for all the measures were worked out. For relationship among study variables, Pearson Product Moment Correlation was computed. Hierarchical linear regression through Process Macro was done to test the linear effect of predictors on outcome and hypothesised moderating effect. P<0.05 was considered statistically significant. The effect size of all Pearson correlations was small as per conventions.19 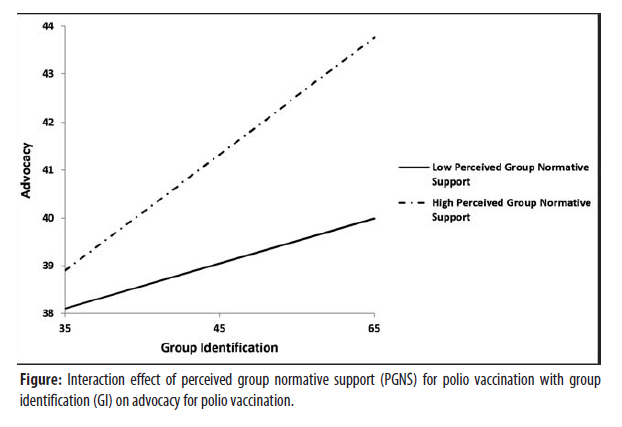 The present study found that increase in GI was related with positive attitude towards polio vaccination. This is because the GI phenomenon enhances group-member's willingness to engage in actions that benefit their group's welfare.20 This concern for social welfare also encompasses vaccine decision-making.21 Increase in PGNS for polio vaccination leads to an increase in advocacy of polio vaccination and a decrease in scepticism towards polio vaccination because societal norms and collective values affect one's attitudes about vaccination.22 For example, supportive group norms predict increase in vaccine intention and acceptance.11,12 The main finding of the present study is that PGNS interacted with GI to positively affect advocacy of polio vaccination. This is in line with the assumption that GI influences attitudes by means of group norms23 because the desire to identify with one's groups makes one conform to the expected standard of that said group10 even in the case of health-promoting behaviour.13

The influential role of group norms in the context of vaccination holds important implications for mobilising community as a whole to promote vaccine acceptance. Vaccination can be promoted by appealing to consensus and unity of norms.24 Furthermore, since GI is what promotes aligning of attitudes with group norms,23 so promoting identification with groups that support polio vaccination can lead to the internalisation of these positive norms. For example, religion matters in polio refusals6, so doubts about polio vaccines can be effectively assuaged with the help of figures from a religious group.

The current study has certain limitations. Diversity of sample is an issue despite aiming for a more heterogeneous sample of all Pakistani adults. Specifically, there was an over-representation of people from Punjab. Researchers suggest that most Punjabis hold positive views about polio vaccination,25 an assertion also confirmed by the high kurtosis score obtained for the Advocacy subscale of ATPVS.17 Regions, such as erstwhile FATA and KP where vaccines refusals and hostile attitudes towards polio workers are common,5 were under-represented. Constraints in sampling were set by the inclusion criteria of literacy and fluency in English. Random sampling of individuals can be taken up in future studies by utilizing diverse methods of data collection. Future researches can also undertake translation of ATPVS so its validity on diverse samples can be determined. Use of ATPVS in diverse samples will also be beneficial in studying the different causal mechanisms operating behind such attitudes.

Another limitation relating to the measurement of PGNS might have influenced the findings. PGNS might have a different effect than actual group norms because the participants may be projecting their own beliefs onto the group instead of the other way round. Therefore, future studies should try to manipulate actual normative support for polio vaccination.

This research points towards the benefits of group influence in promoting support for vaccination. Furthermore, the insight gained can help in identifying individuals and contexts that increase susceptibility to anti-polio vaccination propaganda. In the long run, more individualised campaigns can be designed and implemented that can help in achieving complete eradication of polio from Pakistan.

Disclaimer: The text is based on an M.Phil. dissertation.

8.       Shah SFA, Ginossar T, Weiss D. "This is a Pakhtun disease": Pakhtun health journalists' perceptions of the barriers and facilitators to polio vaccine acceptance among the high-risk Pakhtun community in Pakistan. Vaccine 2019; 37: 3694-703.