Supervised training exercises are the mainstay of pulmonary rehabilitation (PR) in patients with chronic lung diseases like interstitial lung disease (ILD). A 40 years old female patient with systemic sclerosis clinically presenting with usual interstitial pneumonia (UIP) and pulmonary hypertension underwent an eight-week supervised exercise training programme. Forced Vital Capacity (FVC) showed improvement from 48.7% to 54% of predicted baseline, while the initial six-minute walk test (MWT) distance also showed a considerable increase of 15.4% from the baseline after completion of the exercise training. A remarkable improvement was noticed in muscle strength for both the upper and the lower limbs. There was an increase of 79.4% right side handgrip, 25% left side handgrip, and 30.9% increase in lower limbs than baseline strength. The findings show that an exercise training programme under the supervision of trained and competent staff can benefit the improvement of lung function and muscle strength in a patient suffering from chronic lung diseases.

Systemic Sclerosis (SSc) is a rare, chronic autoimmune disease presenting with multiple clinical features and a progressive course, leading to dysfunction, disfiguration and fatality. It may affect various organs in the body, such as the skin, heart, lungs, joints, muscles, and the gastrointestinal tract.1 It is characterised by abnormal deposition of collagen and fragments of the extracellular matrix in the diseased organ resulting in fibrosis and eventually causing structural damage.1

Pulmonary involvement in ILD and pulmonary hypertension (PAH) are commonly seen in patients with SSc, the leading cause of morbidity and mortality.2 SSc follows a mild progressive course involving the cardiorespiratory system, which, gradually leads to easy fatiguability and dyspnoea; hence resulting in physical limitaions. This leads to muscular weakness and sedentary life, thereby affecting the quality of life.3 The involvement of the muscles and joints can further contribute to body weakness and impaired exercise performance.3 The crucial role played by exercise in releaving SSc related symptoms, is still lacking in the literature. SSc patients should be encouraged to undergo a supervised training exercise to help diminish breathing difficulties and improve overall exercise capacity and physical strength.4 This report features combined strengthening and endurance exercises conducted twice per week for eight weeks on an SSc patient with multiple organ involvement to establish an excellent outcome for the said training programme.5

The supervised physical training exercise was conducted when the patient's condition became stable and was performed twice a week for eight weeks and included strengthening exercises for arms and legs and resistance exercises for the arms, legs, and chest. A six-minute walk test (6MWT) was done before and after the training exercises. On day 1, the patient signed the informed consent and responded to the Dyspnoea-12 Questionnaire.5 Muscle strength for the upper limbs (handgrip) and lower limbs was measured using the hand and thigh dynamometer. The body composition was analysed using the In-Body 520 analyser.

The patient's blood pressure (BP), heart rate (HR), and peripheral capillary oxygen saturation (SpO2) were checked before performing the 5-10 minute warm-up stretching exercises, subsequently followed by a series of endurance and strengthening exercises for about thirty minutes. During the activity, the heart rate as shown on the Polar watch worn by the patient and the SpO2 as determined by the handheld Pulse Oximeter were constantly monitored, and the Borg Scale was used for measuring the Rate of Perceived Exertion (RPE).

Spirometry, six-minute walk test and muscle strength for upper and lower limbs were evaluated before and after the exercise training, as shown in Table-1.Whereas, Table-2 shows the dyspnoea-12 Questionnaire as responded by the patient before and after the 8-week training exercise. The questions asked were directed to the patient's perceived breathlessness concerning the present physical condition.6

Consent of the patient was obtained for publishing her case for enhancement of science. 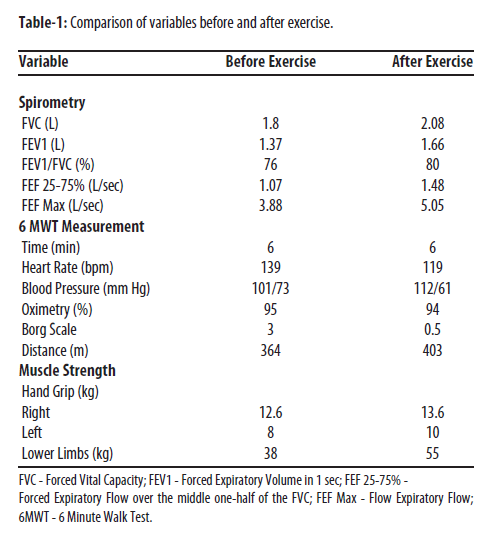 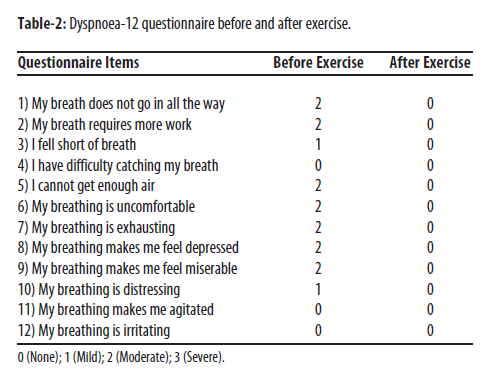 The mainstay of Pulmonary Rehabilitation in patients with chronic lung diseases is a supervised exercise training programme leading to muscle strength fitness, alleviation of respiratory symptoms, and improvement of physical incapability.7 This is our ultimate objective. Spirometry is a screening test for SSc patients without apparent pulmonary involvement and is vital in their long-term management.

Our patient showed improvement in the spirometric results in this report, particularly on the Forced Vital Capacity (FVC), which is a critical parameter. After completing the exercise training programme, the FVC increased to 54% from its baseline of 48.7%. Other parameters also showed improvement. Consequently, the patient's respiratory symptoms also improved based on the Dyspnoea-12 Questionnaire presented in Table-2.

The six-minute walk test is commonly used to assess the physical ability of patients with chronic lung impairment to undertake exercises and their functional capability to perform daily activities.8 It is also a prognostic tool for patients with cardiopulmonary illnesses. A study conducted by Al Ameri and coworkers demonstrated a proportionate decrease in 6MWT distance and a decrease in FEV1 and FVC in patients with different respiratory conditions.9 It shows a correlation between the PFT parameters and the 6MWT distance. As with our patient, her 6MWT has notably increased after exercise from the baseline of 364 meters to 403 meters. Her muscle strength, general well-being, and physical performance also improved. Many earlier studies have claimed an apparent correlation between muscle strength and lung function10. Our patient showed marked improvement in handgrip and lower limb muscle strength after the exercise training, thus improving the physical performance.

The findings of present case report highlight the importance of exercise for patients suffering from SSc. A supervised exercise training programme for patients with chronic pulmonary ailments like SSc with ILD is highly recommended. Exercise is an inexpensive, safe and well tolerated treatment for SSc patients as it significantly improves the patients' health by ameliorating respiratory symptoms, enhancing muscular strength and quality of life).

Acknowledgments: The authors would like to express gratitude to the College of Medicine Research Center, Deanship of Scientific Research, King Saud University, Riyadh, Saudi Arabia, for supporting this study.