The case of a 73-year-old immunocompetent male patient, who came in with a refractory perianal ulcer is presented. The patient had no history of TB and his lab tests for TB were all negative. A chest X-ray showed streak and nodular opacities in both upper lungs. The ulcer was biopsied twice and a diagnosis of TB was finally rendered by histological examination with confirmatory Polymerase chain reaction (PCR). The lesion was finally cured by intensive anti-TB treatment.

Perianal TB needs to be excluded in patients with a refractory perianal ulcer, including immunocompetent cases without TB history. Biopsies and microbiological tests should be performed for any suspicious lesion and repeated if there is high clinical concern. Consideration of differential diagnoses, especially inflammatory bowel disease, is essential. Early and sufficient antitubercular treatment should be initiated to minimize morbidity.

Perianal TB is extremely rare with only case reports present in literature. It usually develops in individuals with both advanced TB of the gastrointestinal tract, lungs, or genitourinary tract and dramatically impaired cell-mediated immunity.1 Ghiya et al. reported three cases of chronic, non-healing perianal ulcers originating from TB with HIV infection.2 Lin et al. presented a patient with angioimmunoblastic T-cell lymphoma who developed perianal TB during the neutropenic phase after chemotherapy.3 The etiology is not entirely clear, but one reasonable explanation is the ingestion of the bacilli from sputum or saliva leading to invasion of the gastrointestinal wall, orifice mucosa or adjacent skin.4

A 73-year-old heterosexual man presented to Sir Run Run Shaw Hospital, Zhejiang University School of Medicine, Hanghou, China on June 16, 2017, with painful perianal ulceration for six months. He reported a small painless lump in the perianal area initially, which rapidly progressed to a superficial ulcer with a thin purulent exudate. He had a prior biopsy performed at an outside community hospital, which showed atypical squamous epithelium. Treatment with oral antibiotics, topical dexamethasone, and antibiotic ointment was ineffective. His past medical history was otherwise unremarkable. He was a retired worker without livestock contact. He was born and lived in Zhejiang Province, China for all his life. In particular, he had no personal history of TB, travel history to a foreign country or known contact with the disease.

Physical examination showed an afebrile, well-nourished male with a 5 cm ulcer in the right perianal region with a nearly round shape (Figure-1). 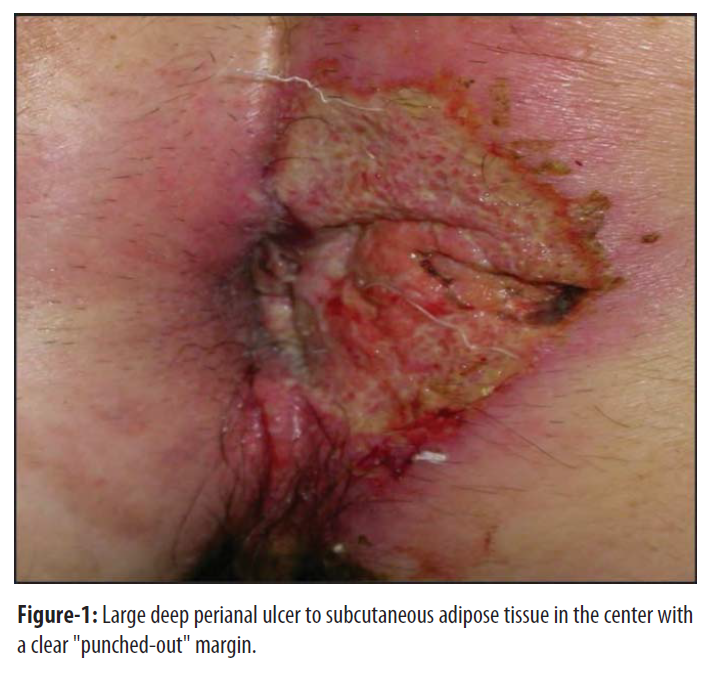 The ulcer was deep to subcutaneous adipose tissue in the centre but was superficial along the periphery with a clear "punched-out" margin. A purulent exudate was seen. Laboratory tests demonstrated negative results for serum antibodies for TB, Hepatitis B virus, Hepatitis C virus, and HIV. Testing for syphilis was negative. He also had a negative tuberculin skin test. Culture of the ulcer exudate revealed Morganella Morganii only, a Gram-negative bacilli usually found in the environment and in the intestinal tracts of humans and reptiles as normal flora. Colonoscopy revealed no abnormalities. Chest X-ray showed streak and nodular opacities in both upper lungs.

The differential diagnosis for a refractory rectal ulcer includes inflammatory diseases (e.g. Crohn's disease), infectious etiologies including sexually transmitted diseases (e.g. syphilis), and neoplasms (e.g. squamous cell carcinoma of the anus). TB was not on the top of our list due to a lack of history and negative lab tests. However, a second biopsy taken from the edge of the ulcer showed several granulomas composed of epithelioid cells and Langerhans multinuclear giant cells (Figure-2), in which there were numerous Ziehl-Neelsen stained rods. Polymerase chain reaction (PCR) was positive for M. tuberculosis. The patient's final diagnosis was perianal tuberculosis. 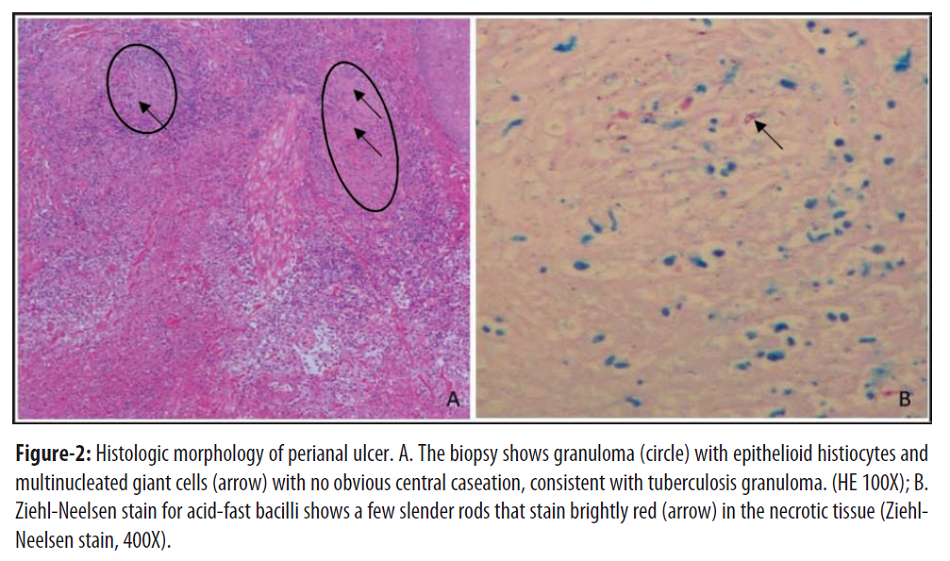 The patient was given antitubercular treatment. He was started on a four-drug regimen administrated in a short course, which included isoniazid 300mg qd, rifampicin 450mg qd, pyrazinamide 1500mg qd, and ethambutol 750mg qd. The course of treatment was four drugs for two months followed by two drugs (isoniazid and rifampicin) for four months. The perianal ulcer shrunk remarkably within six weeks and healed in fourteen weeks. Unfortunately, four weeks after drug withdrawal, ulceration relapsed at the centre of the previous primary lesion. The patient started a second round of antitubercular treatment with a long course, which included four drugs for three months followed by two drugs for six months. The treatment was tolerated well without significant adverse events. The small ulcer was completely healed four weeks from the beginning of the second course of treatment. No recurrence was detected at the last follow-up, nineteen months after the end of the second round of treatment.

The consent of the patient was taken prior to the writing of this manuscript.

The diagnosis of our case was challenging. The patient presented with no history of active TB with a negative skin test and absence of TB antibody. Tuberculin skin tests can be negative in patients with TB due to associated impairment in host immunity. However, our patient was not on any immunosuppressive therapy and did not have a history of immunosuppression. His HIV screening was also negative. Colonoscopy ruled out TB in the colon, including the Iliocaecal region, which is the most frequent predilection site, accounting for more than 85% of the gastrointestinal tract TB. The only evidence suggestive of TB was the image finding of streaks and nodular opacities in both upper lungs. Upper lobe fibrocalcific changes are thought to be indicative of healed primary TB in up to 5% of patients.6 We speculated that this patient had been infected but the disease was well confined by the host immune system until the perianal lesion presented. M. tuberculosis present in sputum, was ingested into the GI tract, and inoculated the perianal mucosa and skin.

Definite diagnosis of perianal TB depends on pathologic and laboratory identification of M. tuberculosis. The typical histological finding is a tuberculoid granuloma, an accumulation of epithelioid histiocytes and Langhans-type giant cells that demonstrates a variable degree of central caseation necrosis and a peripheral rim composed of numerous lymphocytes. An acid-fast stain (Ziehl-Neelsen) can help to identify the bacilli, but it will also highlight nontuberculous mycobacteria. Therefore, culture or nucleic acid amplification tests are required for species identification. Conventional culture is the most sensitive tool for detection of TB so far, but it is time-consuming. New diagnostic techniques, such as amplification by PCR has been successfully performed, which can detect the presence of the bacterial DNA with higher sensitivity compared to histology.5

It is essential to distinguish perianal TB from perianal involvement of Crohn's disease because the latter is much more common compared to TB and initiation of immunosuppressive therapy in a patient with tuberculous enteritis can lead to dissemination.7 Zhao et al. found that TB-IGRA was a useful indicator in the differential diagnosis of intestinal tuberculosis and Crohn's disease.8 The differential diagnosis also includes sarcoidosis, neoplastic etiologies, and other microorganism infections such as amoebiasis, Yersinia infection and actinomycosis.

Perianal TB needs to be excluded in patients with a refractory perianal ulcer, including immunocompetent patients without TB history. Biopsies and microbiological tests should be performed for any suspicious lesion and repeated if needed. Consideration of differential diagnoses, especially inflammatory bowel disease, is essential. Early and sufficient antitubercular treatment should be initiated to minimize morbidity.

Conflict of Interest: The authors declare that they have no competing interests.