Paragangliomas are rare tumours derived from the neural crest cells. Most common site for these tumours is the adrenal medulla, where they are called as pheochromocytomas. Biliary system is an extremely uncommon site for extra-adrenal paraganglioma. We report the case of a 55 year old female who presented with one-month history of jaundice and right upper quadrant discomfort. Imaging showed a well-defined rounded mass at porta hepatis with arterial enhancement causing compression over the proximal common bile duct, resulting in moderate intrahepatic biliary dilatation. The patient underwent radical excision of common bile duct and roux-en-y hepaticojejunostomy. Final histopathology confirmed paraganglioma. Approximately 10% of patients may present with extra-adrenal disease, but biliary paraganglioma are extremely rare. Only few cases have been reported in literature and the management usually involves the surgical excision. Being a rare disease, a high index of suspicion is important for diagnosis of paraganglioma at such an uncommon location.

Paragangliomas are rare tumours derived from the neural crest cells. Most common site for these tumours is the adrenal medulla, where they are called pheochromocytomas.1 However, approximately 10% of the patients may present with extra-adrenal disease. Among those extra-adrenal sites, retroperitoneum stands out as the most involved location but there are reported cases for unusual locations including the carotid body, orbit, lungs, stomach, and urinary tract.2

We report the case of a 55 year old female who presented to the surgery clinic of Aga Khan University Hospital, Karachi, in December, 2016 with one month history of jaundice and right upper quadrant discomfort. She was a known hypertensive, and otherwise in good health. On clinical examination she was visibly jaundiced with some fullness in her right hypochondrial region. Her blood workup showed deranged liver function tests with increase in direct bilirubin, alkaline phosphatase and gamma-glutamyl transferase. Her total bilirubin level was 16mg/dl with direct component being 14.8 mg/dl. Imaging included an ultrasound and computerised tomography scan which showed a well-defined rounded mass at the porta hepatis with arterial enhancement. It measured 32 x 28 mm on axial post contrast images, causing compression over the proximal common bile duct, resulting in moderate intrahepatic biliary dilatation. Magnetic resonance cholangiopancreatography (MRCP) showed dilated intrahepatic biliary channels with external compression over proximal bile duct (Figure-1), but the radiological diagnosis remained inconclusive. The patient was then planned to undergo radical excision of the bile duct with hepaticojejunostomy. 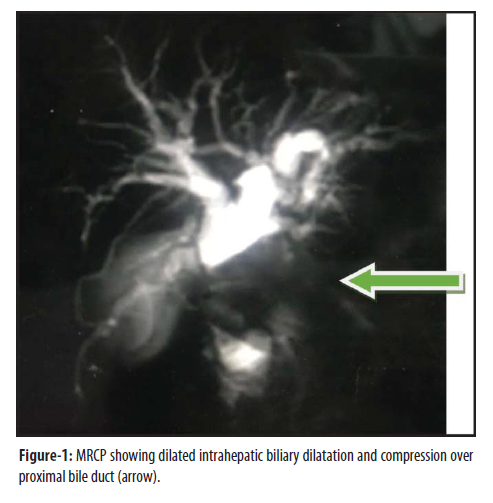 Intraoperatively a well-defined mass was found in the mid portion of common bile duct with proximal biliary dilatation. Cholecystectomy with excision of CBD was performed and hepatic duct was transected at the trifurcation. The proximal and distal resected margins were sent for frozen sections, which were negative for malignancy. Biliary system was reconstructed by a Roux-en Y hepaticojejunostomy. Portal, hepatic artery and para-doudenal nodes were also dissected and sent for histopathology.

In the postoperative period, she remained well and showed steady recovery. Her liver function tests showed gradual improvement and she was discharged on 9th post-operative day. Final histopathology reported a well circumscribed lesion in the wall of the bile duct that was composed of nests and aggregates of neoplastic cells. Individual cells contained moderate to abundant eosinophilic granular cytoplasm with moderate to markedly pleomorphic nuclei exhibiting degenerative atypia containing coarse chromatin and prominent eosinophilic nucleoli. Immunohistochemical stain synaptophysin and cytokeratin AE1/AE3 were performed, for which tumour cells were positive and specimen was signed off as paraganglioma of CBD (Figure-2). Perineural invasion was also seen. Extra lymph nodes were reported benign while the gall bladder showed signs of acute on chronic cholecystitis. Final histopathology was a surprise and workup for paraganglioma was done postoperatively. Vanillylmandelic acid levels were normal (9mg/24hrs). A detailed history inquiring about symptoms related to catecholamine hypersecretion (palpitations, diaphoresis, anxiety) was gained, and no symptoms were found to be present previously or currently. The patient had an uneventful course to recovery and remains well for 5 years after surgical resection with regular clinic visits. 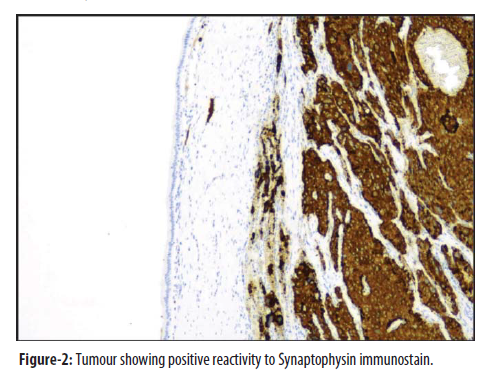 Paragangliomas are rare neoplasms, as the clinical patterns of paraganglioma are commonly described together with those of pheochromocytoma. The specific incidence of paraganglioma is largely unknown. The combined estimated annual incidence of pheochromocytoma/paraganglioma is approximately 0.8 per 100,000 person years.3 Paragangliomas can be functional or nonfunctional, based on chromaffin staining. This however is not related to catecholamine secretion and the symptoms produced by them. The cases of biliary tract gangliomas reported so far have all been non secretory with variable chromaffin staining. Most paragangliomas follow a benign course with only 10% showing malignant potential, but this may vary with respect to the location of the disease.4,5

There are some reported cases of gangliocytic paraganglioma invading the proximal jejunum. Most of them are found in the second part of the duodenum, from where the tumour can invade the ampulla of Vater,6 however paraganglioma of extrahepatic bile duct are rare. Till date there are 4 cases of gallbladder while 5 cases of extrahepatic bile duct paraganglioma have been reported. Wolff et.al7 reported an incidental finding of a gallbladder paraganglioma that was managed with cholecystectomy. Miller et al8 also reported a case with gallbladder paraganglioma who initially presented with choledococystoduodenal fistula and was managed with wedge resection of liver. Hitanant et al9 and Sarma et al10 reported cases of patients who presented with obstructive jaundice and were managed with cholecystectomy, common bile duct exploration and T-tube choledochostomy. They were diagnosed with hepatic duct paraganglioma on histopathology. However, Caceres et al11 reported a common hepatic duct paraganglioma in a 28-year-old patient with history of abdominal discomfort only and no jaundice. None of the patients had symptoms related to raised catecholamine levels. Prakash et al12 described a case of 32 years old female who presented with obstructive jaundice secondary to 15cm x7cm dumb bell shaped paraganglioma arising from distal bile duct. She underwent radical cholecystectomy, choledochotectomy and en-bloc resection of the mass with a Roux-en Y hepaticojejunostomy. Lee et al13 reported a case of 75 years old male with malignant paraganglioma of hepatic duct with liver metastasis.

To summarize our patient presented with obstructive jaundice and the radiological suspicion was that of a possible cholangiocarcinoma and was managed with cholecystectomy, common bile duct excision and hepatico-jejunostomy. Final histopathology showed it to be a CBD paraganglioma. Literature review as of now showed it to be the first case to be diagnosed as a paraganglioma of pure CBD origin, while fourth case of extrahepatic biliary paraganglioma worldwide.

As most of the patients reported till date have presented with obstructive jaundice, surgical excision with hepaticojejunostomy remains the treatment of choice. However correct diagnosis can simplify the operative procedures for this small group of patients and extensive resections can be minimized. Majority of the patients seen with extrahepatic biliary paraganglioma are between fourth to sixth decades. This specific tendency towards age distribution should make the clinician suspicious of this uncommon diagnosis.

Correct modality to diagnose this condition before surgery can be debated upon as there is no investigation of choice yet decided among the researchers. Catecholamine levels can be misleading as they have been normal in all the cases reported so far. An intraoperative biopsy of the lesion along with the resection margins may be able to provide some answers but to come up with something conclusive regarding the diagnostic modality a large cohort of patients is needed which might be a big ask for a disease as rare as this.

Competing Interests: The head of department who has signed the IRB Letter is also one of the co-authors.

Consent: All authors declare that 'written informed consent was obtained from the patient (or other approved parties) for publication of this case report and accompanying images.