Objective: To compare incubator and thermal blanket for thermoregulation in preterm and low birth weight neonates.

Method: The pilot study was conducted from January to March 2018 at the emergency department of the National Institute of Child Health, Karachi, and comprised preterm and low birth weight neonates without any co-morbidity who were randomised to control and interventional groups. Data was collected using a proforma about demographics, weight, gestational age and brief clinical history. Temperature, blood pressure and pulse were monitored along with other routine care after every 15 minutes in the incubator, and the same procedure was adopted for thermal blankets. Data was analysed using Statistical Package for Social Sciences (SPSS) Version 23.

Results: Of the 38 subjects, 19(50%) each were cases and controls. The mean gestational age between the groups was not significantly different (p>0.05). Temperature for the first 60 minutes remained similar in the two groups, but at 75 minutes and onwards, the incubator showed a significantly better results (p<0.05).

Conclusion: Thermal blankets can sufficiently provide a hyperthermic environment to the neonates, but an incubator is a more reliable option to provide sustained temperature.

The global prevalence of low birth weight (LBW) babies is 25-30 million per year and >95% of them belong to the developing countries.1 LBW is associated with significant neonatal mortality and morbidity.2,3 Newborns, particularly those preterm and LBW, have limited capacity for thermoregulation during the first few weeks of life, and are prone to developing hypothermia. Fluctuations in core temperature increase the imbalance of the metabolic rates of newborns.4 According to the World Health Organisation (WHO), neonatal hypothermia is defined as a temperature at birth below the normal range (36.5-37.5°C).5 Takayama et al. determined the mean temperature at birth in 203 healthy full-term infants to be 35.5°C, showing a significant association of temperature with birth weight (p<0.0005).6

Mullany proposed an adjusted classification of neonatal hypothermia to better reflect the relationship between mortality and hypothermia.5 Silveria et al. revealed hypothermia as an independent risk factor for death in neonates, especially those with LBW.7 Various methods exist to dissipate heat-loss in these babies.5 The invention of incubators in 1880 marked the cornerstone in efforts to maintain a stable thermal environment, especially in the developed countries.8 But this method is unsustainable in the developing world, where affordability is a deep-rooted issue. This has led to the exploration of various replacement methods, including thermal blankets, thermal mattresses, and polythene bags to prevent hypothermia. However, no clear benefit has yet been documented in comparison with the incubators. Research on these other methods is limited. Hence, the current study was planned to assess and compare the effectiveness of thermal blankets with standard incubators in maintaining hypothermia in preterm LBW babies.

After approval from the Institutional Ethical Board of the National Institute of Child Health (NICH), the study was conducted from January to March 2018 at the emergency department (ED) of the NICH, Karachi. The sample size was calculated using Statulator, an online statistical calculator by assuming a pooled standard deviation of 0.2 units to achieve 85% power and a 5% level of significance (two sided) for detecting a true difference in means between the test and the reference group of -0.20000000000000284 (i.e. 97.86 - 98.06)°F.9

Those included were new-borns without any co-morbidity except LBW and preterm. LBW was defined as weight between 1500g and 2500g, while moderate to late preterm was taken as 32 to 37 weeks. Those not meeting the criteria or not willing to participate were excluded.

The subjects, enrolled after taking written consent from the parent/guardian of the new-born, were randomised into either control or interventional group by 1:1 allocation parallel design and 2-block randomisation method. A structured proforma was used to collect data about demography, clinical history, temperature, blood pressure (BP) and pulse. Temperature, BP and pulse were monitored along with other routine care after every 15 minutes in the incubator, and the same procedure was adopted for the subjects in the thermal blankets.

Data was analysed using Statistical Package for Social Sciences (SPSS) Version 23. Independent samples t-test was run to determine the difference in means of temperature in the two groups. P<0.05 was considered statistically significant. 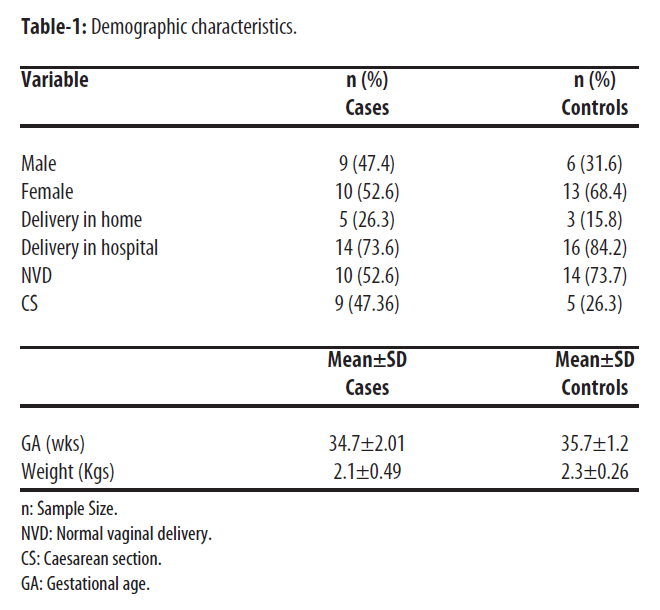 Mean body temperature for first 60 minutes remained similar in both the groups, but at 75 minutes and onwards it was significantly higher for the cases (p<0.05) (Table-2). 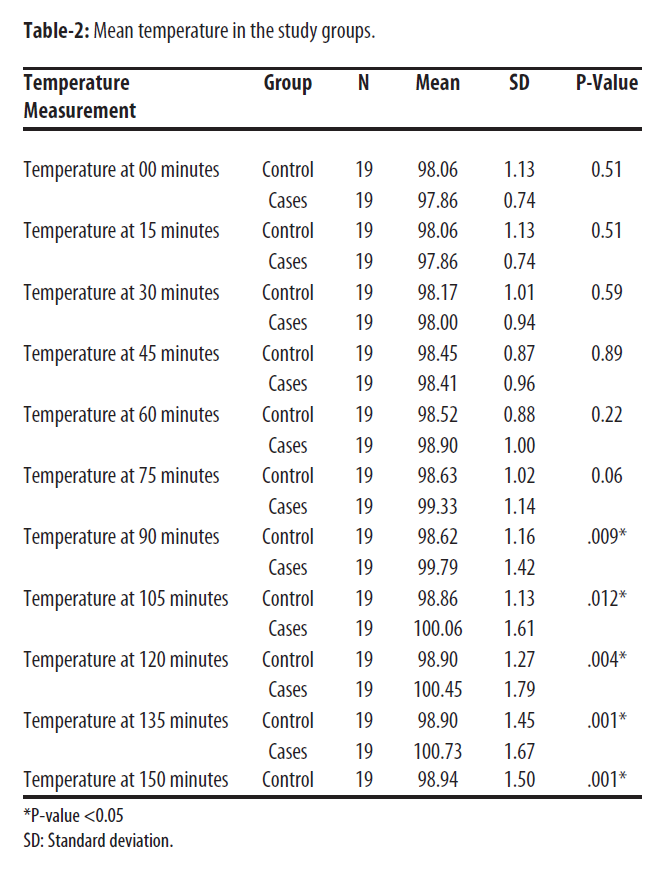 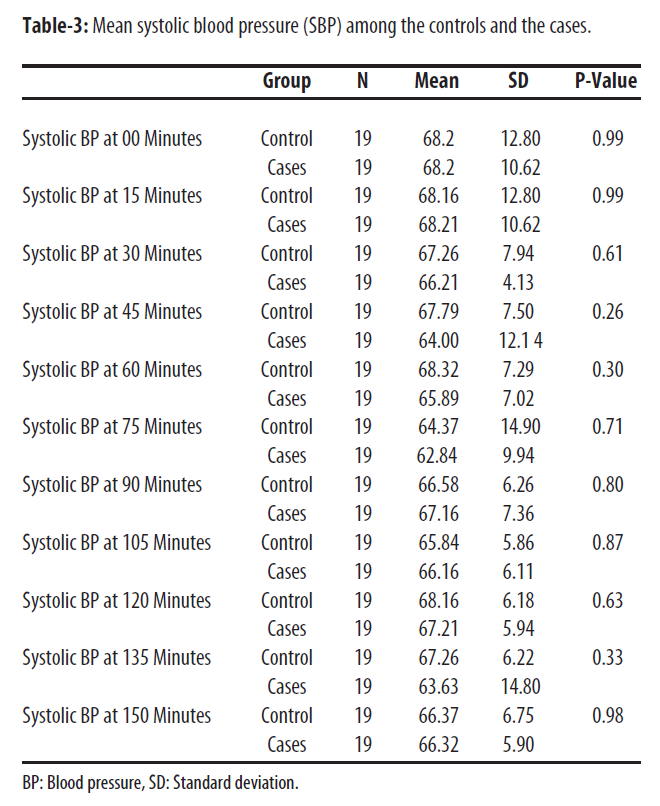 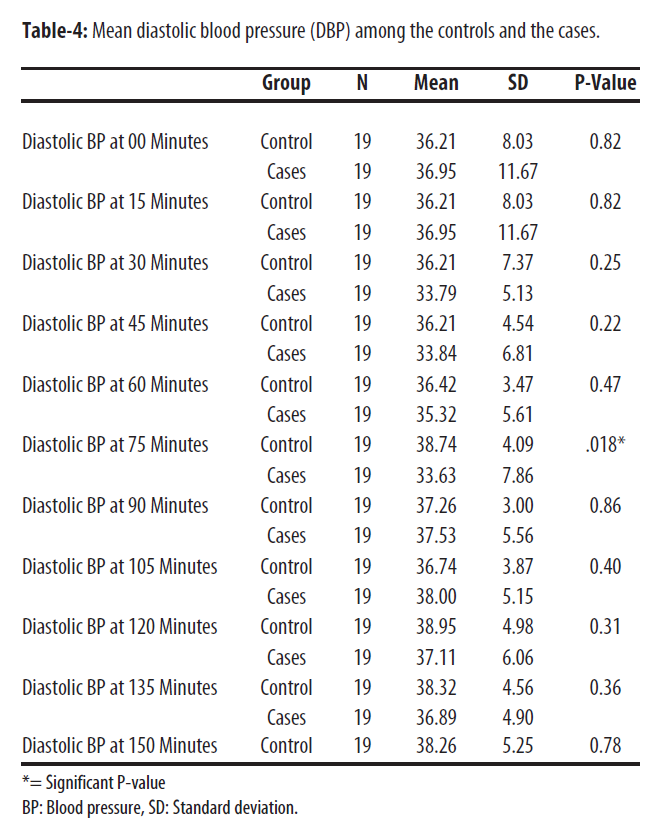 There was no significant difference in the mean pulse rate of the two groups (Table-5). 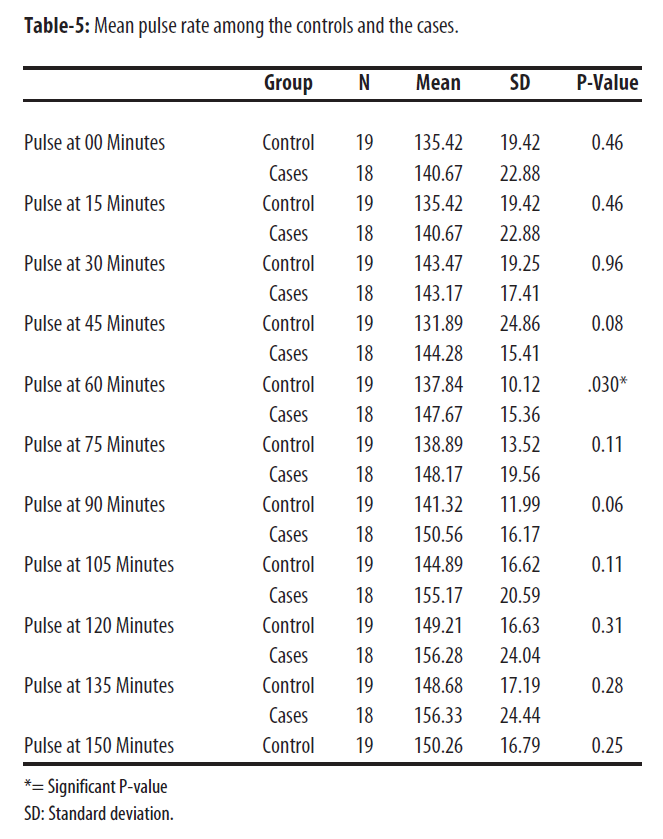 While comparing the efficacy and practicality between the two techniques to counter neonatal hypothermia, the current study found that the rise in temperature for the first 60 minutes was similar for both thermal blanket and incubator groups.

Hsu et al. proved the benefits of thermoregulation by thermal blankets as hypothermia was controlled with a remarkable effect on hypotension in most cases.10 However, the current results showed that the effect on hypotension was similar to that by incubators, while the incubators had an edge after one hour. Knobel et al. used polyurethane bags in the delivery room and showed a significant reduction in the incidence of neonatal hypothermia in the interventional group.11 Its safety and feasibility were also affirmed.12 Lunze K et al. in a study done at a rural setup described that despite knowing the potential measures that can be followed for managing hypothermic newborns, such as drying and wrapping, delayed bathing and preventing the evaporation, and early breastfeeding, these are not practised adequately, especially in the first few critical hours after birth.13 Demissie BW et al. found delayed breastfeeding and lack of skin-to-skin contact to be highly associated with hypothermia,14 and encouraged early initiation, especially in countries/setups that are less equipped with advanced methods and techniques.

Hypothermia is highly prevalent in preterm births, especially in countries like Pakistan. The results of the current study was in line with a previous study from Pakistan which also showed that hypothermia was most frequent in preterm neonates.15

In low-resource settings, electricity-based appliances, like incubators, seem inappropriate because of its high cost. In these situations, to maintain the heat chain, the use of other more suitable cost-effective devices, such as thermal blankets, is an encouraging prospect. Hence, the current study recommends the use of thermal blankets as they are affordable, effective and practical appliance that has the potential to play a pivotal role in reducing neonatal mortality, especially in developing countries.

The current study has limitations, like a small sample size and a single-centre orientation. Large experimental trials are needed to depict the most cost-effective and reliable method to provide adequate warmth to a neonate where an incubator is unattainable.

Thermal blankets could sufficiently provide a hyperthermic environment to the neonates, especially during the first hour. However, an incubator is a more reliable option to provide a sustained temperature and, hence, should be the preferred technology. Low-resource settings need to have cost-effective appliances, such as thermal blankets, as a replacement for the incubators.