Effects of aerobic exercise and progressive muscle relaxation on migraine

Objectives: To determine the effect of aerobic exercises and progressive muscle relaxation in migraine patients.

Conclusion: Prophylactic medicine, aerobic exercises and progressive muscle relaxation, when used together, were found to be effective means of intervention for migraine.

Migraine is one of the most prevalent and the 6th most common cause of disability globally.1 Despite the impacts and burden that migraine imposes on the individual, its actual mechanism is still poorly understood. It affects women more than men with the ratio of 3:1.2 Migraine usually attacks those in the 30-40 age group. For many years it has been considered that migraine is a type of headache. In fact, migraine is a complex neurological disorder and headache is one of its symptoms. Other symptoms include nausea/vomiting, photophobia, phono-phobia, aura in specific types, gets worse by movement and sometimes involves half-sided weakness of body.3-5 Pathophysiology of migraine is still an on-going debate among scientists from prehistoric vascular concept to modern clear picture of the neurological disease. Scientific evidence proved that its pathology involves different mechanisms, like cranial vasodilation,6 central sensitisation of trigeminal nerve,7 cortical spreading depression8-11and serotonin mechanism.12 Migraine has four stages, Pre-dome/premonitory phase, aura phase, headache phase and the post-dome phase. Migraine has two types of episodic and chronic migraine on the basis of frequency. On the basis of clinical presentation, migraine is of many different types, including migraine without aura, migraine with aura, aura without headache, basilar migraine, vestibular migraine, ophthalmologic migraine and hemiplegic migraine. In the past few years, a lot of research had been done regarding the effects of aerobics and progressive muscle relaxation (PMR) on migraine.13-15

Studies reported that aerobics and PMR decrease the intensity of migraine pain.13-15 A study found significant decrease in intensity, frequency and duration of migraine pain along with enhancement in quality of life (QOL).16 Another study proved that aerobics and PMR significantly improved Migraine Disability Assessment Scale (MIDAS) score and decreased the intensity and frequency of migraine15 which in turn improved the QOL of migraine patients. Exercises, like aerobics, can also be used as prophylactic for migraine when they are combined with medicines, like amitriptyline.17 Despite all these studies, outcomes are strictly dependant on adherence to exercise.14

The current study was planned to determine the effect of aerobic exercises and PMR in migraine patients.

The quasi-experimental study was conducted at the Sheikh Khalifa Bin Zayed Al Nayhan Hospital / Combined Military Hospital (CMH), Muzaffarabad, Azad Jammu and Kashmir, from February to July 2017. Ethical approval for the study was taken from Research Ethical Committee of Riphah College of Rehabilitation Sciences, Riphah International University. The sample was raised using non-probability purposive sampling technique. Those included were patients of either gender aged 20-50 years having migraine with and without aura and were having at least two attacks per month, with each attack lasting at least two days. Patients with cardiovascular and neurological disorders, rheumatoid arthritis, major depression, pregnancy and those taking antipsychotics were excluded and so were those who had migraine that got worse with movement. After taking informed consent from the subjects, they were allocated non-randomly to intervention group A and control group B.

The subjects were diagnosed by neurosurgeon/ neuro-physician using the diagnostic criteria of the International Headache Society.18-20 In the Physical Therapy department, detailed history of the patients of both groups were taken. Headache frequency, pain intensity, duration, associated symptoms, aggravating factors, relieving factors, past medical history and family history were noted. The patient was then assessed at baseline using outcome measuring tools which included MIDAS, a precise and easy-to-use questionnaire to compute disability related to migraine.21 the Headache Disability Index (HDI),22 which is a 25-item scale to assess the impact of headache on different dimensions of life, including social life, family life and personal life, the Headache Impact Test-6 (HIT-6), which evaluates disability related to migraine,23 the Central Sensitisation Inventory (CSI), which measures consequences of chronic pain on the daily life of a patient,24,25 and the Numeric Pain Rating Scale (NPRS), which measures pain intensity.26

Group B was treated with prophylactic medicines provided by the neuro-physician/neuro-surgeon. The medicines used were flunarazine 5mg twice daily, inderal 10mg thrice daily and nortriptyline 25mg at night. Group A was treated with physiotherapy sessions, including aerobic exercise (stationary cycling) for 30min with 10min warm-up and 5min cool-down sessions in addition to PMR for 15min 3 times a week for 6 weeks along with prophylactic medicine.

Both groups were again subjected to the outcome measuring tools 3 weeks later and the final reading was taken at the end of the 6-week intervention. There was no loss to follow-up.

Data was analysed using SPSS 21. Mean ± standard deviation (SD) was calculated for age, onset of migraine, type of migraine, duration of attack, intensity of pain, side of the head affected, family history of migraine and attack time. Normality of data was checked. Shapiro Wilk test was applied and histograms were plotted. As value of test was >0.05, tests of choice were parametric for comparison of mean values between the groups. Mixed-method analysis of variance (ANOVA) was done that showed changes in means of different variables within and between the groups. Post-hoc Bonferroni analysis was done for week-wise comparison of different variables for both the groups. Independent samples t-test was applied for comparison between the groups. P<0.05 was considered statistically significant. 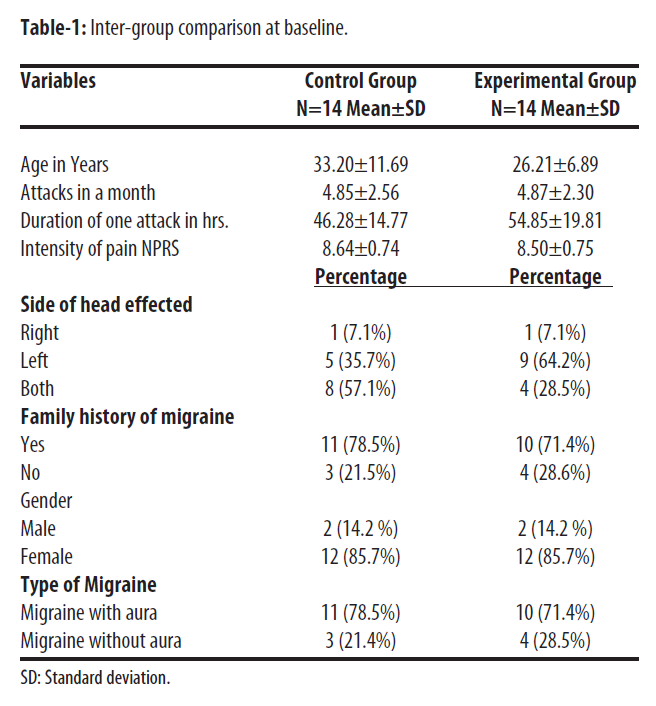 Mean values of scores on all the outcome parameters showed significant improvement in both the groups (p<0.05) (Table-2), but group A had significantly better results compared to group B (Table-3). 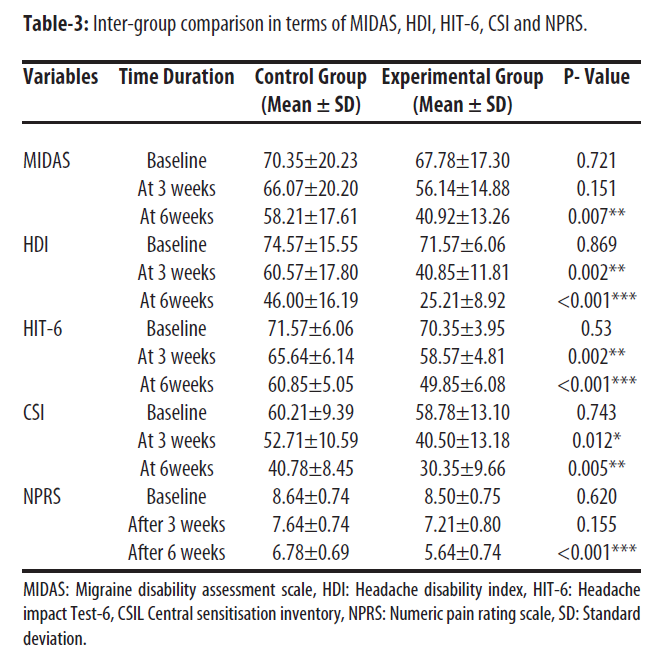 Findings showed that aerobic exercise and PMR was a better prophylaxis for migraine than medicines alone. Although exercise is also considered one of the triggers of migraine attack, there is debate among researchers about that what kinds of exercise can be the trigger.27 A study used the term 'good physical activity' that is actually beneficial for migraine.28 Moderate-intensity aerobics in a controlled manner can be beneficial for patients with migraine.29 In the current study, moderate-intensity exercise in the shape of stationary cycling 30min with 10min warm-up and 5min cool-down along with PMR for 15min showed significanty better results. High-intensity exercise can trigger migraine, but this is not true for every patient.27 Another concern regarding the protocol of designing exercises for migraine patients is the duration of the exercise and adherence to the exercise plan. Studies on the effects of aerobics and PMR on migraine designed protocols for 8 weeks, 10 weeks and 12 weeks.15-17,30-32 But patient showed non adherence in those studies and the effects were not evaluated as planned, because outcomes are dependent on adherence to treatment.14,33 The current study combined the aerobic exercise and PMR for 3 times a week for 6 weeks so that the patients could easily adhere to the treatment and in this way the outcome was not affected by non-adherence.13,34 There were no dropouts in the current study.

A study had also used aerobics for 30min with 10min warm-up and 5min cool-down. 3 times a week for 10 weeks.31 Similarly, a study31 about the influence of aerobic exercises on information processing in migraine patients used the same protocol to evaluate its impact on migraine reduction.31 In the current study the treatment protocol was the same, except for its 6-week duration and addition of PMR. Despite the shortened duration, the protocol proved to be effective, indicating that aerobics combined with PMR give early and better results in reducing migraine pain. A study13 had aerobics exercises done by female subjects followed by 15min of PMR 2 times a week for 6 weeks in addition to prophylactic medication. The overall finding strongly supported the outcomes of the current study.

The current study has limitations, with a small sample size due to being a pilot study. Also, randomisation was not possible due to lack of blinding and novelty of treatment for physicians and migraine patients in the study area. Due to these circumstances, this pilot study as, an exploratory non-randomisation clinical trial was designed to establish a base for the future randomised clinical trials. Biomarker was also not used due to feasibility issues. Purposive sampling means the findings are not generalisable. Broad-based studies with larger and diversified samples should be conducted regarding the effect of reversibility principle of aerobic exercises on migraine and should have a long follow-up.

Prophylactic medicine and aerobic exercises along with PMR were found to be effective means of intervention for migraine patients. But when they are combined, they are more effective.

26.     Egan J, Chepucova E, McGulre M, Online Mindfulness vs Progressive Muscle Relaxation vs a Combination of Both as a Treatment of Migraine-Empowering Clients in Their Choice of Treatment to Control Their Chronic Headache. Eur Health Psychol. 2014; 16:422.

Progressive Muscle Relaxation vs a Combination of Both as a Treatment of Migraine-Empowering Clients in Their Choice of Treatment to Control Their Chronic Headache. Eur Health Psychol. 2014; 16:422.