Gastrointestinal stromal tumours (GISTs) are the most common mesenchymal tumours. Approximately 60-70% arise from the stomach.1 In contrast, Schwannomas are rare submucosal tumours arising from neural plexus of the stomach that contain Schwann cells. Gastric Schwannoma (GS) has an incidence rate of 0.2% of all the gastric tumours, 6.3% of the gastric mesenchymal tumours and 4% of all the gastric benign tumours.2 Both GS and GISTs have typical presentation as submucosal neoplasms with spindle cell histopathology and both appear grossly similar on endoscopy.1 They only differ on immunohistochemistry so, it remains difficult to distinguish them from one another preoperatively. It is important to reach a correct diagnoses as both of them have completely different treatment options.

We report a case of a 58 year-old-female with epigastric discomfort, diagnosed as GIST preoperatively and underwent surgery. Histopathological studies confirmed GS. After surgery she recovered well. We are reviewing the literature and discussing the sporadic case reports in hope that it will help the future clinicians in diagnosing and treating the GS.

The case was first seen in February, 2020 at Liaquat National Hospital Karachi. A 58 year-old-female was referred from the Gastroenterology department for the resection of GIST of stomach. She exhibited symptoms of moderate epigastric pain and occasional vomiting for a month. Her examination findings were insignificant. Her endoscopy showed large growth with white based ulcer in the centre that was noted in the body of the stomach and biopsies were taken. Endoscopic ultrasound was also performed, which showed 4.0 x 5.0cm hypoechoic lesion in the body of the stomach arising from muscularis propria. The CT scan was done which showed 5.5 x 4.6cm heterogenous enhancing mass along the anterior gastric wall. It was exophytic in nature, which minimally bulges the gastric lumen, most likely to be GIST. Few subcentimeter lymph nodes were also noted in the perigastric region on greater curvature (Figure-1). 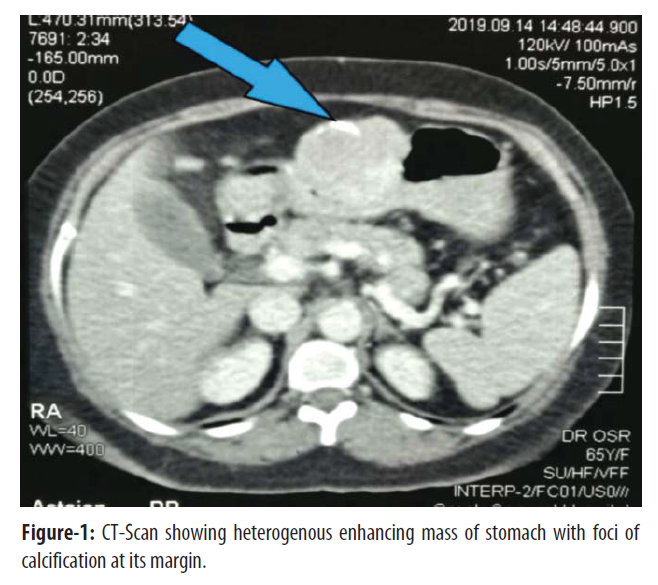 Endoscopic biopsy was inconsistent with features of malignancy but one fragment showed a portion of submucosa with mild oedema, spindle cells, and antibodies. Chromogranin A, S100, DOG1, CD20, and CD3 were applied however, no convincing evidence of malignancy was seen.

A preoperative diagnosis of submucosal mass was made. Lab workup was within the normal range and the patient underwent exploratory laparotomy with excision of tumour. Intra-operative findings showed exophytic growth palpable at lesser curvature, wedge resection was done with 1cm clear margin circumferentially and no omental, hepatic and peritoneal metastasis was seen (Figure-2). 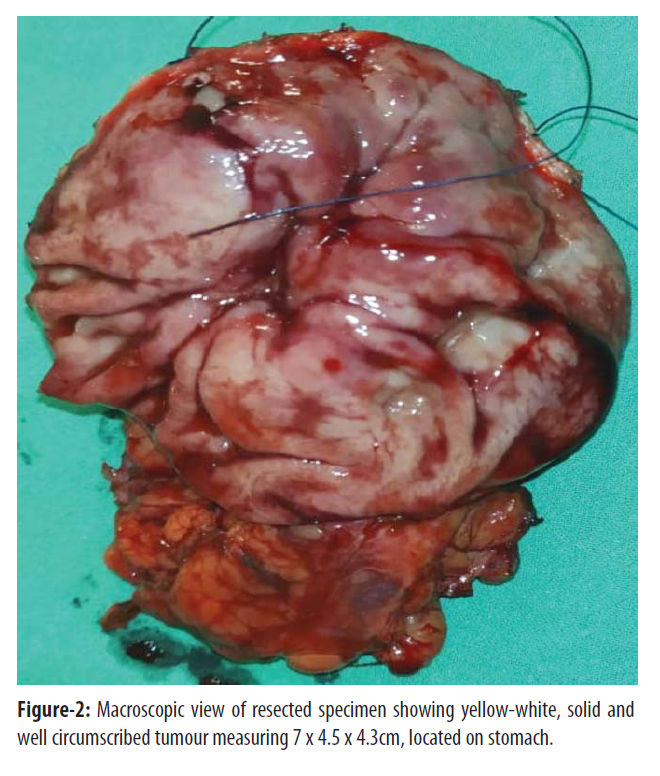 Histopathology showed intramural neoplastic lesion which was composed of hyper and hypocellular areas of spindle cells with bland elongated nuclei. Verocay body formation was appreciated, five benign lymph nodes were seen, no atypia or necrosis were observed and S-100 was positive with CD-34 being negative in the Immunohistochemical studies which favours the diagnosis of GS (Figure-3a and b). 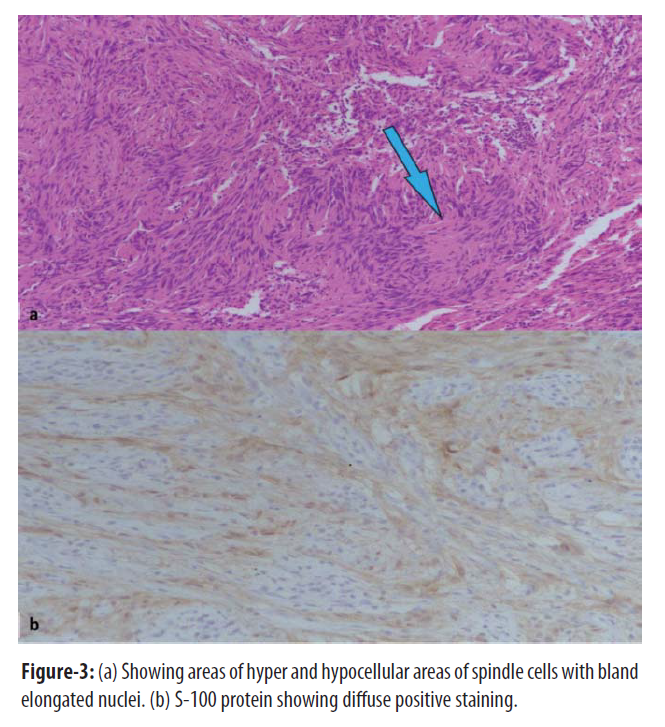 Surgical margins were free. Her post-op recovery was uneventful and there was no morbidity on 3 months follow-ups.

The patient was referred from Gastroenterology with Endoscopic ultrasound and endoscopic biopsy which showed hypoechoic lesion arising from body of stomach and portion of submucosa with spindle cells respectively. Postoperatively immunohistochemistry of biopsy specimen was positive for S-100 confirming GS. The most common submucosal mesenchymal neoplasm of GI tract is GIST.3 Apurva et al. showed in their study an incidentally detected gastric mass but the patient presented with vaginal bleed unlike our case where patient presented with epigastric pain and vomiting. Contrast-enhanced CT scan showed a 3.8cm mildly enhancing gastric mass arising from the body and fundus and bilateral ovarian cysts.4 She underwent an endoscopy followed by a biopsy which revealed non-specific signs of chronic inflammation. In our case endoscopic biopsy was not convincing for neoplasm which showed spindle cells in submucosa. The diagnosis of GIST was made and after surgery histopathology confirmed GS as in our case. However, the GI involvement is really rare with the most common site being the stomach representing 0.2% of all gastric tumours, with low risk of malignant transformation.5 GS can present with abdominal discomfort with bleeding ulcers in GS. Another case reported by Sanei et al. which reports a 28 years old female presented to ER with haematemesis.6 Her symptoms were worsening over time and she underwent an endoscopy which showed antral submucosal mass with gastric outlet obstruction but there was no finding of abdominal obstruction in our case. The CT-Scan showed gastric antral hypodense mass along with anterior wall and luminal narrowing with gastric dilatation. In our case CT-scan showed heterogenous enhancing mass along the anterior gastric wall. Sanei et al.6 counselled the family for subtotal gastrectomy with Roux-en-Y gastrojejunostomy and pathologic examination revealed GS with positive S-100 like in our case.

During Upper Endoscopy, GS can be incidentally encountered and can present as well circumscribed with intact overlying mucosa and can grow in exophytic nature. A case reported by Bao-guang et al. showed a 61 years old female with a 2-year history of non-specific epigastric pain. She underwent upper GI endoscopy to rule out gastric ulcer, but was found to have submucosal bulge from gastric body.7 Another case reported by Changsheng Pu et al. showed a 30 year old man with non-specific abdominal pain but B-Mode ultrasound showed a gastric mass.8 However, no endoscopic biopsies were taken in both cases unlike our case. It is exactly like in our case in which the patient presented with non-specific pain and endoscopic findings showed a gastric mass. Bao-guang et al.7 performed laparoscopy which showed exophytic mass on lesser curvature with clear margins but to achieve optimal resection margins, the procedure was converted to open surgery and the mass was removed by laparoscopic wedge resection in Changsheng Pu case. Like in our case, postoperatively both histopathologies confirmed GS.

Another diagnostic tool used is CT-Scan which shows hyper vascular lesion as heterogeneous enhancing mass with necrosis or cystic necrosis in GS while in GIST it shows homogenous enhancing exophytic mass with cystic degeneration. Due to this overlapping of presentation it is very difficult to differentiate GISTs from GS.

Histologically, GS are encapsulated tumours consisting of abundant spindle cells with prominent lymphoid aggregation characterized by Antoni A and Antoni B areas.9 Shah AS et al.4 showed that the diagnosis can only be confirmed on the basis of immunohistochemistry (IHC) in which GS shows strong nuclear and cytoplasmic staining for S-100, vimentin and glial fibrillary acidic protein while GISTs do not (Table).4

In our case, patient had tumour which was involving muscularis propria and was greater than 3cm. Resection was done and definitive diagnosis of GS was made postoperatively on the basis of IHC. The treatment options are laparoscopic or open approaches for wedge resection, subtotal gastrectomy or near-total resection, and total gastrectomy. The recurrence rate of GS is very rare so they seldom require screening.

GS is a rare mesenchymal tumour but it is important to include it as a differential diagnosis in gastric submucosal tumours seen on endoscopy and radiology. Only IHC can confirm GS. The curative treatment is surgical resection. It will provide a sigh of relief to the patient upon diagnosis of GS due to their benign nature.

Consent: Written informed consent was obtained from the patient for publication of this case report and any accompanying images. The consent of the patient/guardian was taken prior to the writing of the manuscript.

A multi-disciplinary approach to the management of intra-venous and intra-cardiac leiomymatosis: A case report

A case of congenital methaemoglobinaemia with secondary polycythemia