Rumination syndrome is a functional gastrointestinal disorder with effortless, non-projectile regurgitation seen mostly in paediatric population and seems to be an uncommon gastrointestinal disorder due to lack of awareness among physicians. Here we report three such cases in adult patients that were labeled "refractory vomiting". No such case has been reported from Pakistan which makes this a unique case series. All of our patients were diagnosed within six to fifteen months of initial symptoms, hence a high index of suspicion is required for early diagnosis of Rumination Syndrome to avoid excessive and repeated investigations, causing emotional trauma and financial loss to patients and their families.

Rumination syndrome (RS) is a functional gastrointestinal disorder with effortless, non-projectile regurgitation, not preceded by nausea or abdominal discomfort.1 Extensive epidemiological studies are lacking but the disease seems to be uncommon with a prevalence reported between 0.8 -0.9%.2 Diagnosis of rumination syndrome is mainly clinical, and ROME-IV and DSM-5 criteria have been formulated as diagnostic criteria (Table).1-3 The disease implications can range from mild social inconvenience to severe malnutrition, dental caries and erosions.4 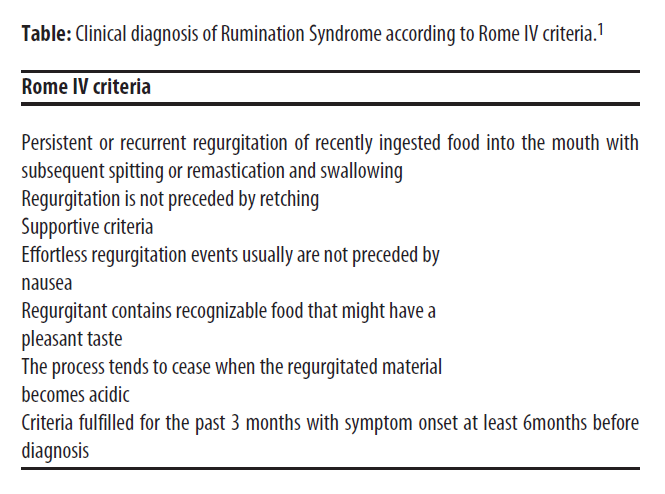 The mechanism of rumination has been described as voluntary but unintentional abdominal wall contraction causing increased intra-gastric pressure. This leads to overflow of food from the stomach towards the oesophagus, overcoming the pressure at lower esophageal sphincter.1 This regurgitation is often referred to as vomiting by patients and their parents,5 leading to missed and late diagnosis. In addition, this also leads to unnecessary investigations, invasive procedures like surgeries and feeding-tubes placement, with financial implications and loss of work/school days in many of the cases.6

RS has historically been described in children and adolescents with developmental delay, but recent consensus showed that developmental delay is not a pre-requisite for the diagnosis.7 Also, adult patients may present with rumination syndrome that had been previously labeled as Gastro-Esophageal-Reflux-Disease (GERD) or refractory vomiting, pointing towards the physicians' lack of awareness.1

Here we report three such cases that were labeled "refractory vomiting" and underwent excessive and repeated investigations, leading to emotional trauma and financial loss to the patients and their families. A thorough literature review showed, that no such case has been reported from Pakistan, making this a unique case series. Ethical approval from the concerned authorities (A/28/68/EC/20 dated 05-11-2020) and patients' consent for publishing the case series were duly sought.

Case 1: A 21 years old soldier was referred to the Gastroenterology and Hepatology Department of Pak Emirates Military Hospital, Rawalpindi with a complaint of intractable vomiting in September 2018. The history revealed effortless, non-projectile vomiting within 15 minutes of food intake without preceding nausea, headache, vertigo or abdominal discomfort for the last four months. There had been no haematemesis, weight loss, developmental delay or any significant past medical and surgical history. He denied any illicit drug use and alcohol consumption. Physical examination and baseline labs were normal, with no clinical or biochemical evidence of malnutrition, dental caries or erosion, raised intracranial pressure or electrolyte imbalance. Ultrasound abdomen and pelvis were normal and so was a barium meal. A gastric scintigraphy study for delayed gastric emptying was also within the normal range. An upper GI endoscopy was planned for ruling out gastric outlet obstruction, which was also normal till the second part of duodenum (D2). This was followed by an enteroscopy, CT brain and abdomen and a high resolution esophageal (HRE) manometry for reflux disease, all of which came back normal.

The patient's history was reviewed and a clinical diagnosis of RS was made.

Case 2: A 16 years old girl with refractory vomiting and a surgically created gastro-jejunostomy was referred to our specialized unit in March 2019. Her history dated back to early 2018 where she vomited post-prandial and would either spit the vomitus out or chew and swallow it back. The vomiting was described as effortless, without any prior nausea or abdominal discomfort, but would relieve patient's anxiety and tasted like the food she recently ingested. Repeated ultrasounds, barium studies, CT scan of abdomen and endoscopic studies were negative. A gastro-jejunostomy was done for idiopathic gastroparesis at a peripheral hospital and she was started on prokinetics and proton-pump-inhibitors. The Patient presented multiple times to the ER after the surgery, with refractory vomiting and weight loss.

In our centre, a gastric scintigraphy was done followed by an upper GI endoscopy (to rule out any anastomotic strictures). Both the studies were normal and a working diagnosis of RS was formulated.

Case 3: A 24 years old lady was referred from a district hospital in June 2020 with repeated post-prandial vomiting after a traumatic divorce. The vomiting was witnessed by the doctor on duty as within 10-15 minutes of feeding, non-projectile and effortless. A complete physical exam including an ophthalmoscopy and visual acuity was normal. All necessary biochemical tests, radiological studies, HRE manometry and upper GI endoscopy were normal. The Psychiatry and Mental Health Department was involved and a collaborative diagnosis of RS was made.

Studies have shown that patients with RS have a history of visiting five physicians on an average over a period of 2.7 to 4.9 years before been given a definitive diagnosis.1 Depression, fibromyalgia and rectal evacuation disorders have increasingly been seen among patients of RS,1 with cognitive behavioural therapy (CBT) and tricyclic-antidepressants (TCAs) have shown promising results.

Diagnosis of RS is mainly clinical but GERD, achalasia, other esophageal motor disorders, mechanical obstruction and metabolic causes need to be ruled out. Gastro-duodenal manometry has been advocated for the diagnosis but owing to the invasiveness and unavailability of the technology, its use is still experimental.1,8 Diaphragmatic breathing exercises, speech therapy, biofeedback therapy and Cognitive Behavioural Therapy have all been used with success. Pharmacological therapy includes baclofen, TCAs, levosulpride and buspiron.8,9 Fundoplication and sub-total gastrectomy have been reported in a few case series but the lack of robust research with high surgical risk deem surgical procedures inappropriate for treating RS.10

All of our patients were started on Baclofen 10mg thrice daily and Cognitive Behavioural Therapy with diaphragmatic breathing exercises re-enforced by the gastroenterologist. The male patient was followed over a period of nine months and showed drastic improvement with no significant drug related complication. The female patients, unfortunately, were lost to follow up after the initial few sessions of Cognitive Behavioural Therapy.

A high index of suspicion is required for an early diagnosis of RS. Treatment algorithms and definitive diagnostic tools are lacking. Robust research to develop validated tools for diagnosis and its impact on the quality of life of patients is the need of the day. All of our patients were diagnosed within six to fifteen months of initial symptoms, with one of the patients presenting with gastro-jejenostomy as an unnecessary procedure from periphery. Diaphragmatic breathing and CBT remain the first line therapies but still needs acceptance in our region due to cultural issues.

Disclaimer: None to disclose.

Conflict of Interest: None to disclose.

Source of Funding: None to disclose.