Vitamin D deficiency: A risk factor for myopia in children — a cross sectional study in a tertiary care centre

Objective: To study the role of vitamin D deficiency as a risk factor for myopia in children aged 5-15 years.

Method: The cross-sectional observational study was conducted from January to September 2019 at the Ophthalmology and Paediatric departments of Shifa Foundation Community Health Centre, Islamabad, Pakista. It comprised patients with suspected / symptomatic vitamin D deficiency who were enrolled from the paediatric outpatient department and referred to the ophthalmology clinics for eye exam. Apart from taking detailed ocular history, slit lamp examination, Snellen's distance visual acuity, auto-refraction to calculate spherical equivalent, and amplitude scan for measuring the axial length were performed. An average of 3 measurements was taken for both refraction and axial length calculation. Myopia was labelled if mean spherical equivalent was ≤0.25 dioptres. Vitamin D deficiency was defined as serum 25-hydroxyvitamin D level < 20ng/ml. Data was analysed using SPSS 23.

Conclusion: Low vitamin D levels were not significantly associated with myopia in children aged 5-15 years, but significant associations were found between myopia and relatively older age, and various anthropometric measures.

Visual impairment and blindness have an undesirable effect on learning abilities as well as on social and psychological health of a child.1 Uncorrected refractive error (RE) is the commonest cause of visual impairment in children.2 Population-based studies of uncorrected REs in different countries concluded a prevalence of 22.3% in China, 17.3% in Singapore and 17.1% in Malaysia.2,3

Over centuries epidemiological studies have recognised multiple potential risk factors for the development of myopia. Researchers have found low incidence of myopia in those who spent more time outdoors compared to the ones more involved in indoor activities. This led to the concept that vitamin D might be a possible moderator of this association.7 All over the world, vitamin D deficiency and insufficiency have been found in all age groups, including children, belonging to different socioeconomic strata.8 Recent international studies reported an association with serum 25-hydroxy vitamin D 25OHD concentration and myopia.9-11 Whether this reflects the association between outdoor exposure and myopia, or whether vitamin D itself plays a role in the pathophysiology is unclear.

The current study was conducted to investigate the association between the prevalence of myopia in children with suspected / symptomatic vitamin D deficiency aged 5-15 years.

This cross-sectional observational study was conducted from January to September 2019 at the Ophthalmology and Paediatric departments of Shifa Foundation Community Health Centre, Islamabad, Pakistan. After approval from the institutional ethics review committee, the sample size was calculated using the OpenEpi calculator12 with an expected frequency of children with REs as 3.3±5%,6 confidence interval (CI) 99% and margin of error 5%.

The sample was raised using non-probability convenience sampling technique from the paediatric outpatient department (OPD) and were referred to the ophthalmology OPD for eye exam. Those included were paediatric patients of either gender aged 5-15 years with suspected / symptomatic vitamin D, deficiency. Children with vitamin D deficiency secondary to renal or hepatic issues and medications were excluded. Also excluded were those with ocular conditions other than REs, like congenital cataract, congenital glaucoma, ocular trauma and corneal dystrophy, and patients with myopia associated with connective tissue disorders, like the Marfan syndrome.

For vitamin D deficiency, blood sample was drawn through antecubital venipuncture and it was analysed through chemiluminescence. Vitamin D deficiency was defined as serum 25OHD level <20ng/ml. The demographic information and clinical features were noted on a specially-designed proforma. 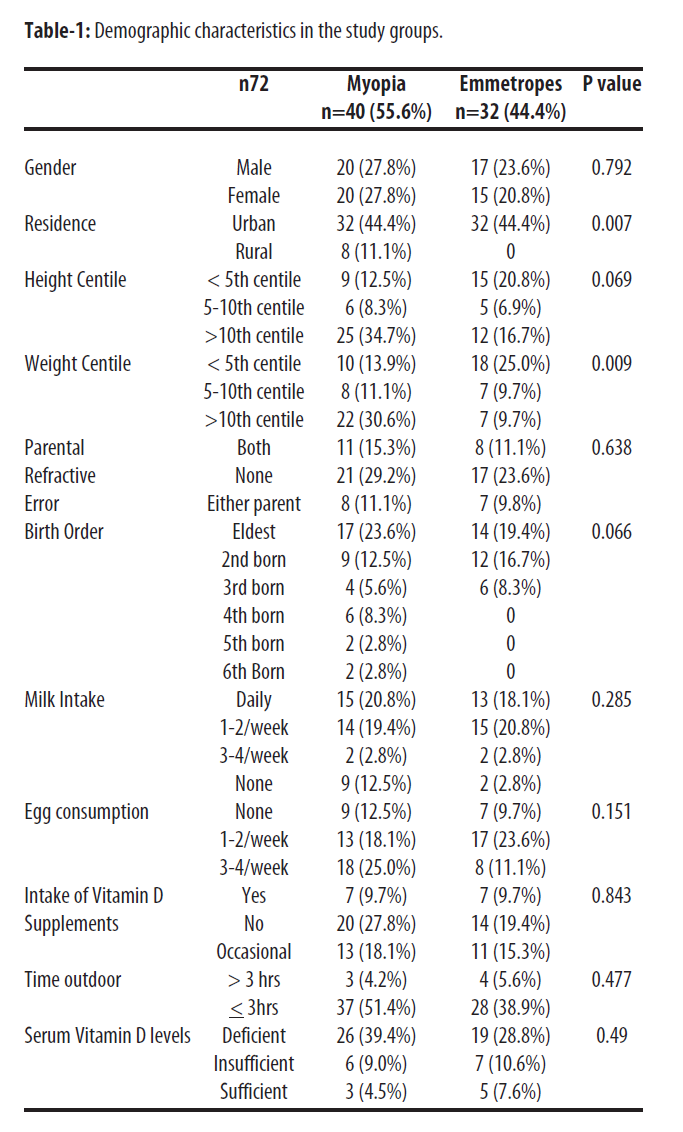 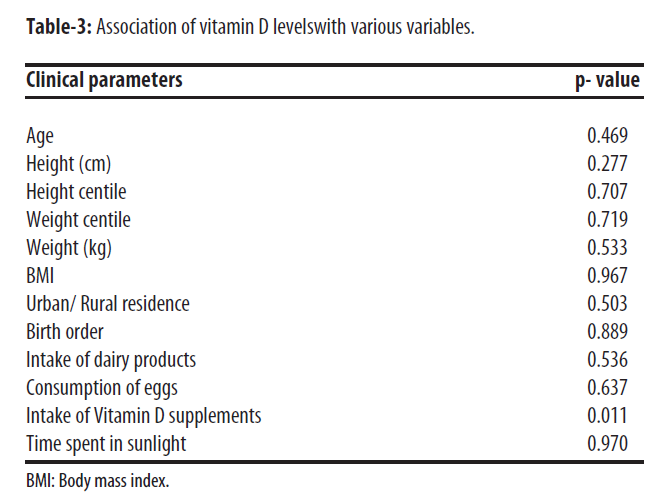 The current study established that serum Vitamin D levels had no association with myopia after adjusting for confounding factors. Vitamin D is currently perceived as a hormone which affects almost all body systems apart from calcium homeostasis and bone health.8 Most of the study population had low vitamin D level in both groups, but low serum vitamin D levels were not found to have any significant association with myopia. A study in Pakistan reported 58.17% of the population being deficient in vitamin D and 26.65% having insufficient vitamin D.13 Similar observations were reported in another local study in Azad Kashmir.14 Comparable results were reported among adults in a multi-country European study.15 No convincing evidence for a direct role of vitamin D in myopia risk was found. In contrast, certain international studies have reported that low vitamin D levels were inversely proportional to the risk of myopia in children.10,16-19 Myopia is prevalent in the Asian population.1 At present, recommended methods for preventing myopia that are supported by strong evidence are time spent outdoors, bifocal lenses, and a drop of atropine.19 Studies on outdoor activities are a bit controversial as some have indicated no association,19 while others reported that outdoor time was protective against myopia.20-22The current study did not find significant association of myopia with time spent outdoor. A systematic review and meta-analysis from China demonstrated the protective effect of outdoor time against myopia onset, but not for myopic progression.7 The exact mechanism of outdoor light in preventing myopia is yet to be determined.7,20

Parental myopia is thought to be associated with a greater risk of early-onset myopia in the Asian population,23,24 and some studies have found parental myopia as a risk factor for early-onset myopia.24,25 In contrast, the current study could not find a significant association between single or both parent RE and children myopia (p=0.638). Different population cohorts or limited sample size could be the possible reason for this.

The current study found equal gender distribution in myopic patients at a M:F ratio of 1:1. Similar finding were reported earlier,26 While other studies reported a male predominance.27

Age was significantly associated with myopia, as highlighted by the fact that the axial length increased with age, and the mean age was higher in the myopic patients compared to the non-myopes (p=0.005). In literature, myopia prevalence has been reported to be significantly higher in children aged 12-13 years (p<0.001).28

Regarding vitamin D supplementation, most patients in both groups in the current study were not on regular vitamin D supplements, and their consumption of dairy products was inadequate which explains deficient and insufficient vitamin D status in these subjects. Lack of awareness and access to these food items can be responsible for the low levels.

Height, weight and BMI in the current study were positively associated with myopia. Previous reports have shown that height is associated with increased axial length. Changes in axial length may involve remodelling of the scleral extracellular matrix, which would increase the axial length because of the lengthening of the vitreous chamber. Similar findings were observed in a study which found that taller children and those with higher BMI were more likely to develop myopia.28-30 However, one study showed that myopic RE was not associated with weight or BMI.31 These inconsistencies may result from ethnic and demographic differences.

Children living in rural areas were seen to have myopia more frequently in the current study, which is a finding different from others who found more myopia in urban population.28 The difference in finding may be because of the fact that the current study had no patient from the rural population in its emmetropic group which might be a confounding factor.

The prevalence of myopia was numerically higher in first-born child in the current study (23.6%) as has been reported earlier.32

The current study has certain epidemiological limitations, as, being a cross-sectional study, it inherently lacked the effect of temporality. Also, it could not take into account the effect of seasonal variations on serum vitamin D levels. Data was collected in resource-limited conditions and the study used convenience sampling. The sample size was also relatively small.

The mean serum vitamin D levels were lower in myopic children, but the difference was not significant compared to the non-myopic patients. Myopia was more common in relatively older children living in rural areas and having higher height, weight and BMI values.