Objective: To detect polymorphisms of CYP1A1, GSTM1 and GSTT1 gene loci among various tobacco-consuming ethnicities in an urban centre, and to relate these with susceptibility to oral cancer.

Method: The cross-sectional, case-control study was conducted at Ziauddin University, Karachi, and the Dow University of Health Sciences, Karachi, from 2011 to 2016, and comprised patients having oral squamous cell carcinoma in group A, with oral precancerous lesions in group B, and tobacco habit-matched controls in group C. Routine histopathology was followed by molecular analysis through polymerase chain reaction and polymerase chain reaction-restriction fragment length polymorphism techniques. Data was analysed using SPSS 20.

Conclusion: Intra-ethnic distribution of tobacco-metabolising enzyme genes can be considered an important contributor to oral cancer risk in the population of Karachi.

Karachi is a multi-ethnic city where a substantial proportion of its population has migrated from different areas of Pakistan as well as neighbouring India, Afghanistan and other countries.1 Although Karachi is a part of Sindh province, majority of its Sindhi-speaking population has migrated from the interior of Sindh.2 The difference in the prevalence of oral lesions among people of different origin in Karachi city has been historically attributed by researchers to the chewing and smoking habits of the people rather than their place of birth.3 Another phenomenon observed more recently is the adoption of tobacco habits prevalent in one ethnicity by another. For instance, Punjabi-speaking, Sindhi-speaking and Balochi-speaking communities have adopted the Paan culture brought here by the Urdu-speaking community from India.2 Gutka, introduced in the late 1960s and 1970s, has become widely available and consumed by all ethnicities of the city.4

Studies conducted in the past in Karachi shed some light on the tobacco culture of the metropolis and its relationship to the much-prevalent oral cancer. On evaluating 262 subjects for Gutka habit, one study found that the Sindhi-speaking have now become more addicted to it (27%) than the Urdu-speaking (20%).5 Interestingly, Pashto-speaking community, well-known for Naswar-chewing habit, while living in Karachi, has developed a liking for Gutka (9.2%) and other varieties of tobacco.5 Similarly, the Punjabi-speaking (10.3%) and the Balochi-speaking (18.3%) citizens have also developed passion for Gutka.5 Another study, conducted on 145 diagnosed oral squamous cell carcinoma (OSCC) cases, revealed 80% were addicted to Paan, followed by 60.68% to Gutka. Other habits included cigarette smoking (30.34%), Naswar (8.96%) and alcohol (5.51%).6

It is now a well-documented fact that certain individuals, by virtue of their genotype for xenobiotic-metabolising-enzymes (XMEs) involved in tobacco metabolism, are more susceptible to cancer formation when exposed to tobacco products.7 This could possibly explain why only a small number of persons among those addicted to tobacco develop cancer in their lifetime.8 Cytochrome P450 (CYP) family of genes especially CYP1A1 and Glutathione S-transferases (GSTs) have been the most implicated enzyme systems that are involved in tobacco metabolism, and, hence, the generation of related potential carcinogens.9

Studies have established regional and ethnic differences for several of these and other metabolic genes. Genetic polymorphisms of CYPs and GSTs in different ethnic groups or populations have been evaluated for variability.8-10 The database of over 1,500 non-cancer individuals, when analysed for the frequency of common metabolic genes, revealed significant differences among Caucasians, Asians, Africans and African-Americans.10 A study in neighbouring India reported differences in allele frequencies of phase II GSTs between the population of northern states and south/central India.11 A similar study in Malaysia confirmed the variability of GSTM1-null and GSTT1-null genotypes among its population of different descents.12

The current study was planned to evaluate the inter-ethnic variability ofCYP1A1 MspI, GSTM1-null and GSTT1-null metabolic gene polymorphisms among the citizens of Karachi.

The cross-sectional, case-control study was conducted at Ziauddin University (ZU), Karachi, and the Dow University of Health Sciences (DUHS), Karachi, from 2011 to 2016. After approval from the two institutional ethics review boards, the sample size was calculated with 10% precision and design effect 2, using EPI-Info 6.0.13 Confidence level 95% was required to find out the association between the nature of tobacco exposure and oral lesions in line with literature.14 The sample was raised using non-probability purposive sampling technique. Subjects were enrolled from the Oncology Department of ZU Hospital, North Nazimabad, Karachi, from December 2011 to October 2016, and the Otolaryngology Ward of Civil Hospital, Karachi, Dr. Ishrat ul Ebad Khan Institute of Oral Health Sciences (DIKIOHS), DUHS, Karachi, in 2014-15. Besides, camps were also set up in Clifton, Baldia Town, Landhi, Liaquatabad, Orangi and Manghopir areas of the city that have high concentration of chewable tobacco-users as well as consumers of tobacco in smoked forms. These areas also provided the ethnic diversity that was of critical value to the study objectives.

Those included were histologically-confirmed cases of OSCC in group A, clinically-diagnosed oral precancerous lesion (PCL) cases in group B, and tobacco habit-matched controls in group C. For both cases and controls, subjects had to be aged >10 years. For controls, there had to be no prior history of any cancer, including OSCC and oral PCL, and the tobacco habit needed to approximately match in duration and frequency with those of the cases. Individuals with cancer of any site other than oral cavity, with any other serious disease, aged <10 years and those who did not give consent were excluded.

Data was analysed using SPSS 20. For the larger study, demographic data was compared among the groups using descriptive statistics. CYP1A1, GSTM1 and GSTT1 genotypes were distributed among different habit groups, ethnicities and sites of lesions. The results were expressed as frequencies and percentages. To evaluate the association between tobacco exposure and oral cancer outcome, odds ratios (ORs) were calculated, while the precision of ORs was adjusted by 95% confidence interval (CI). The mean age of the patients was adjusted to exclude the aging factor. The number of controls was also adjusted to match the age and lifetime tobacco exposure of cancer cases. The risk due to studied genes was determined by binary logistic regression model with CYP1A1 m1/m1, GSTM1 not null and GSTT1 not null considered the reference category. Multi-variant analyses were performed to understand gene-gene and gene-environment interactions. Chi-square test was used for the determination of significant difference among the groups. The significance level was set at p<0.05. 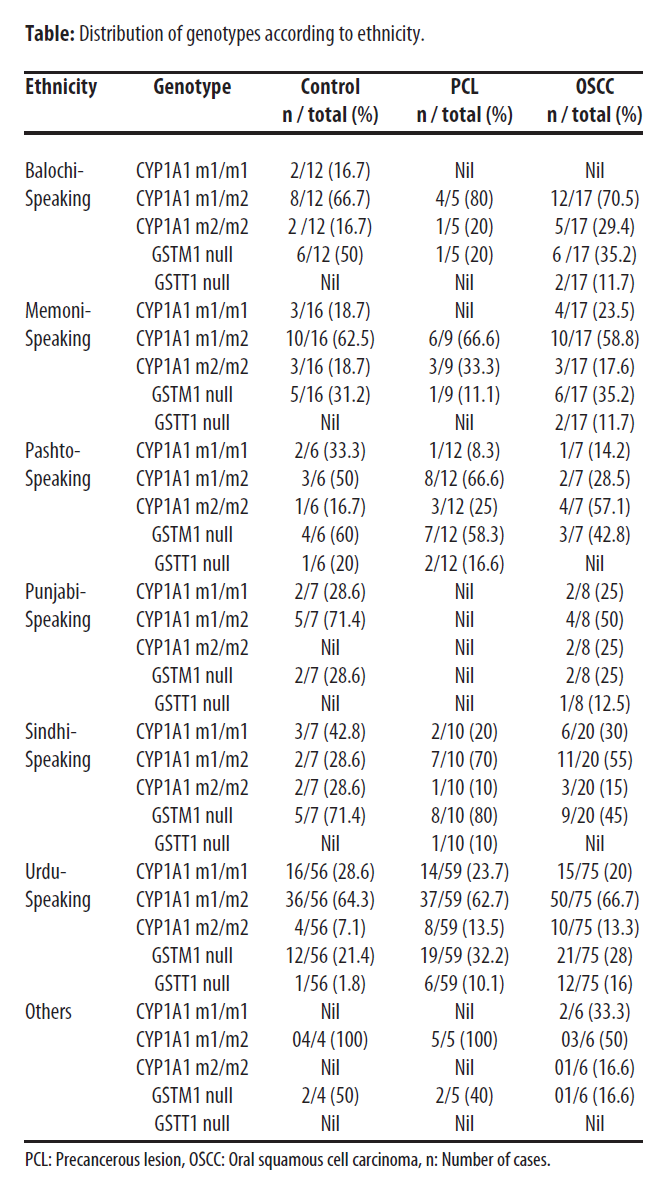 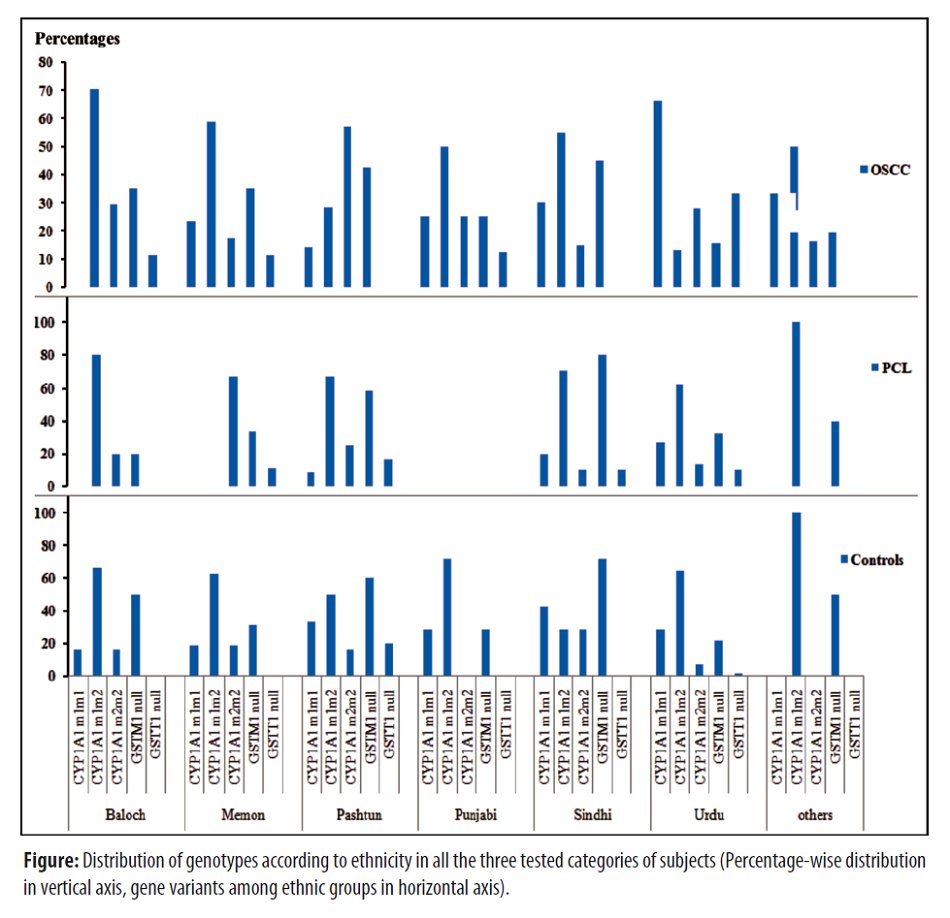 To the best of our knowledge, the current study is the first to evaluate genotype distribution of tobacco metabolising enzymes among various ethnicities living in Karachi. Previously, a study reported data about tobacco-addicted Pashto-speaking ethnicity of Khyber Pakhtunkhwa (KP) province of Pakistan; CYP1A1 MspI polymorphism in 38% cancer cases and 36.4% tobacco habit-matched controls. It found the WT variant of this gene in 62% OSCC cases and 63.6% controls.8 The current study found CYP1A1 MspI m1/m2 and m2/m2 polymorphisms in 85.7% OSCC cases and 66.6% controls belonging to the same Pashto-speaking community. However, the total number of Pashto-speaking subjects in the current study was only 25 across all the three categories. Among the Urdu-speaking community, a significantly higher percentage of CYP1A1 MspI homozygous variant was observed in the patient groups compared to the controls. The heterozygous variant was found to be equally distributed in all three categories. When considering all the studied ethnicities, only Urdu-speaking community had a higher proportion of GSTM1-null variant in PCL and OSCC cases compared to the tobacco habit-matched controls. It can be inferred that GSTM1-null polymorphism may not be a significant contributing genetic aberration for oral cancer risk in tobacco users among any of the ethnic entities living in Karachi.

As far as GSTT1-null genotype is concerned, an increased frequency of this gene variant has been reported in oral cancer cases from tobacco-addicted Pashto-speaking ethnicity.19 The present study found this genotype in PCL cases (2/12) among Pashto-speaking subjects, while none of the OSCC cases belonging to this ethnic group showed the polymorphism. Among the Urdu-speaking community, a significantly high frequency was seen in oral cancers (16%) compared to PCLs (10.1%) and the controls (1.8%). Other ethnicities, like Balochi-speaking and Memoni-speaking, showed increased frequency of this polymorphism in OSCC cases (11.7% each), while in the Sindhi-speaking community it was present only in PCL cases (1/10).

The current study has limitations, like the lack of representation of certain genotypes in some of the tobacco-consuming ethnic groups. This could probably be addressed by a larger sample size having substantial enrollments to cover each of the tested domains in all ethnicities. The findings though are valid, quite reliable and generalisable within the scope of study.

Intra-ethnic distribution of tobacco-metabolising enzyme genes can be considered an important contributor to oral cancer risk in the population of Karachi.

Disclaimer: This article has been taken form a large project approved by DUHS-IRB.