A 34-year-old woman had a history of 3 miscarriages and presented with symptoms of an unproductive cough and rising serum beta-human chorionic gonadotropin (b-hCG) levels. There were no gynaecological symptoms. A diagnosis of Choriocarcinoma with pulmonary metastasis was made. In Pakistan, the incidence of Choriocarcinoma remains exceedingly rare, accounting for less than 0.3% of all gynaecologic tumours. Though rare, if managed appropriately, it has a reasonably good prognosis, as demonstrated by the outcome of the current case.

Choriocarcinoma, a subtype of Gestational Trophoblastic Neoplasia (GTN), is an aggressive tumour with the ability to invade local uterine tissues and ability to metastasize to distant sites (lungs, vagina, liver, gastrointestinal tract, and brain), via haematogenous spread).1 The metastatic tumours are often fatal even before a definitive diagnosis of Choriocarcinoma is made.1 While this germ cell tumour rarely presents at sites other than the placenta, it remains an uncommon presentation in pregnant women, with an estimated incidence of 1/70,000 pregnancies.2

This case report describes the unusual clinical presentation and subsequent successful treatment of a 34-year-old woman diagnosed with Choriocarcinoma with pulmonary metastasis, following a history of recurrent miscarriages. Undergoing six cycles of EMA-CO chemotherapy and complete surgical resection of the anterior segment of the right upper lobe of the lung, the woman was successfully able to conceive and give birth to a healthy baby.

A 34-year-old woman (Gravida 4 Parity 1 + 3) presented to the outpatient Obstetrics & Gynaecology clinic at The Aga Khan University Hospital in Karachi in January 2016 with complaints of non-productive cough for a month, difficulty in conceiving, and a history of rising serum beta-human chorionic gonadotropin (b-hCG) levels. Her last known serum b-hCG level, measured one month ago, was 592.9 mIU/ml (reference range: for healthy males and non-pregnant females: <10 mIU/ml). She had a prior history of two consecutive molar pregnancies three years ago and a recent miscarriage two months ago, after which she did not have her monthly menstrual period. On examination, vitals showed tachycardia (pulse: 126/min) and systolic hypertension (BP: 169/84), with the remaining general physical examination being unremarkable. She also had a history of tuberculosis as a child, and her family history was significant for diabetes mellitus, hypertension, and lung carcinoma. The Dilation and Curettage (D&C) report of the previous miscarriage had revealed no evidence of molar pregnancy.

Further investigations followed shortly afterward, showing the repeat serum b-hCG level to be 702.4 mIU/ml, significantly higher than her previous test. Her pelvic ultrasound revealed a retroverted uterus, normal in size with no masses observed in the myometrium. There was no evidence of an intra or extrauterine pregnancy. Endometrial thickness was measured (to be) at 8 mm, with two tiny cystic lesions present in (the) endometrium (Figure-1). Furthermore, in routine chest X-ray, two well-defined soft tissue nodules were noted in the right perihilar region, the largest one measuring about 24 mm. 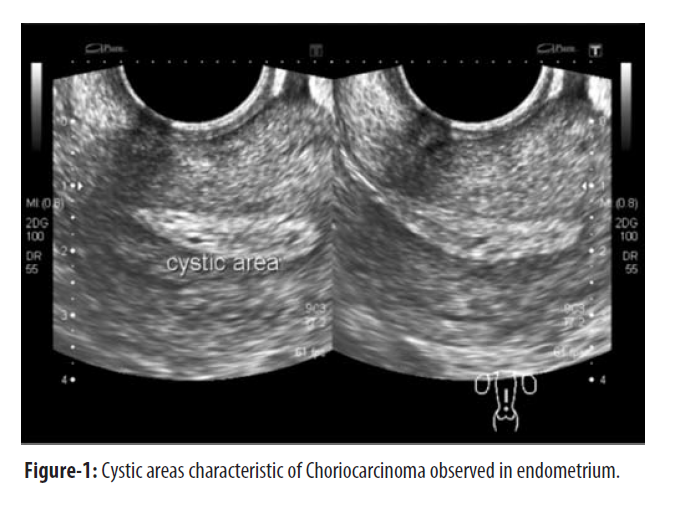 Based on history and investigations, a diagnosis of Choriocarcinoma was made, and the patient was started on methotrexate (IM 50 mg) for one week. The treatment was then transitioned to six cycles of the EMA-CO chemotherapy regimen, each cycle lasting two weeks (etoposide, methotrexate, actinomycin-D, cyclophosphamide, and vincristine). The patient tolerated the therapy well, and no significant side effects were reported. Consequently, the serum b-hCG levels fell towards normal as the therapy continued, and her final reading was reported as 2.8 mIU/ml.

At the end of her chemotherapy, a CT scan and X-ray of her chest and abdomen were ordered to assess the success of the chemotherapy. The imaging revealed that the treatment regimen had successfully treated the primary choriocarcinoma mass with healing and residual fibrosis showing a hyperdense area measuring 15 x 13.6 mm on the right side of the uterus. This was characteristic of fibrosis. However, the metastatic lesions persisted, with the largest soft tissue opacity in the right perihilar region now measuring 26 x 20 mm on the CT scan and X-Ray (Figure-2). 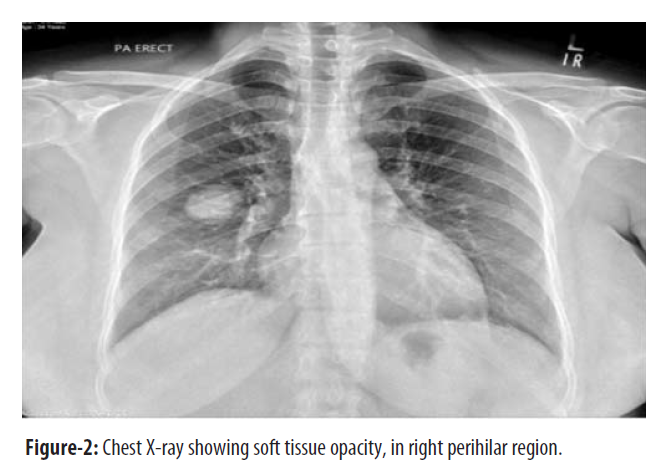 Three weeks post chemotherapy, a right sided thoracotomy at the fifth intercostal space was performed, coupled with complete surgical resection of the anterior segment of the right upper lobe of the lung, containing the largest two metastatic lesions. The resected tissue was sent for biopsy, which revealed a necrotic tumour nodule measuring 30 x 26 x 5 mm embedded in lung parenchyma exhibiting extensive haemorrhage. The atypical cells were seen to be 0.4 cm from the parenchymal resection margin and 0.5 cm from the visceral pleural surface. Throughout and after the surgery, the patient remained haemodynamically stable and was discharged, without any complications on the fourth day of admission.

Gestational trophoblastic disease (GTD) is a group of rare yet aggressive uterine tumours, with an overall prevalence of 0.1% amongst women.3 The incidence rate in Asia is 5 to 15 folds higher as compared to the Western countries.4 It has been stipulated that high incidence rates in Asia are correlated to low socioeconomic status and poverty.5 However, despite being a developing country, Pakistan has GTD as the least common gynaecological cancer comprising only 4% of all gynaecological tumours.5 Choriocarcinoma is the most severe form of GTD and has the lowest rate of 6.6% amongst all GTD in Pakistan.4

Usual symptoms of Choriocarcinoma include vaginal bleeding, anaemia, rapid uterine enlargement, pelvic and abdominal pain. The most common complaint which brings these patients to a physician is vaginal bleeding.4 All of these symptoms were absent in the case discussed, highlighting its atypical presentation. The only symptom that the patient presented within this case was a persistent cough, indicating the possibility of a secondary lung pathology or metastasis.

Choriocarcinoma usually arises after a gestational event, including abortion, hydatidiform mole, and normal pregnancy, all seen in 17%, 57%, and 26% of the cases, respectively.6 A recurrent history of molar pregnancies drastically increases the risk of similar complications in the future. Maternal age and previous molar pregnancies are the two most important risk factors. Maternal age less than 20 years and greater than 45 years imposes higher risk for the development of this highly progressive cancer.7 Some studies have shown that nulliparous women and those with parity of six or more have a higher risk for the development of Choriocarcinoma.7 Based on these risk factors, our patient had a relatively lower risk for acquiring these metastatic lesions; however, despite all this, she developed this tumour two months after her prior miscarriage.

Choriocarcinomas have a high chance of rapid growth and metastasis to distant organs. The tumour in this case was a stage III tumour according to FIGO staging due to its metastasis to the lungs.8 The metastatic mass in the lungs was characterized by multiple rounded soft tissue nodules with the centre marked with extensive infarction, surrounded by the inner mononuclear trophoblast and outer syncytiotrophoblast layer.9

This invasive tumour is very rare but presents with a fairly good prognosis. Chemotherapy is most often used for its treatment; however, surgical treatment is also implemented. The high-risk group is usually given multi-drug EMA-CO therapy with multiple cycles to prevent the recurrence of the tumour.10 However, choriocarcinomas arising after normal pregnancy are shown to be resistant to the therapy compared to those arising from a hydatidiform mole.7

Based on our case report, we conclude that Choriocarcinoma can have an atypical presentation and can even be asymptomatic. Despite having a lower prevalence in Pakistan, it can occur in a low-risk population and present as an aggressive tumour with distant metastasis. Therefore, it is crucial to be mindful of this fact in a clinical setting not to misdiagnose and subsequently exacerbate potentially treatable conditions.

Consent Form: Patient's consent was obtained for publishing the case for science promotion.

Disclaimer: This manuscript was presented at the 11th Biennial Conference: Cardiothoracic Surgery 2020 and Beyond at The Aga Khan University, Pakistan.