A retrospective review was conducted In Aga Khan University from January 2013-December 2020 for patients who received Total Skin Electron Beam Therapy (TSEBT) on the management of Mycosis Fungoides (MF). The clinical response rate and disease-free interval (DFI) was evaluated for three patients. All of the patients received a 3600 cGy dose of radiation. Clinical complete remission (cCR) was observed in two out of three patients, while one patient showed clinical partial response. Following the cCR to TSEBT, the DFI of the first patient with stage 1B lasted 30 months, while the second patient with stage IIB remained disease free for five months. TSEBT is an effective treatment for MF disease.

It can thus be expected that patients with limited disease in the early stage can acquire a cCR with a longer DFI.

The clinical outcomes of our study show concordance with the literature. The patients who had extensive (T3) skin involvement and had refractory diseases showed lower DFI with radiation.

Mycosis fungoides (MF) is the most common subtype of Cutaneous T Cell Lymphoma (CTCL).1 The skin biopsy and histopathology remain a major tool for establishing a diagnosis that the clinical, molecular and immunopathological presentation can complement. The management of MF depends on the present "stage" and assessment by a multidisciplinary team. This disease responds to various local or systemic therapies, like topical treatments, radiotherapy, phototherapy, chemotherapy, and novel targeted agents. However, clinical responses to almost all modalities are commonly transient. Radiation involves the whole skin surface to be treated with the low energy electrons, produced by a linear accelerator to a specified depth. In current literature, this technique is referred to as total skin electron beam (TSEBT) therapy.2 In contrast to conventional radiotherapy techniques, the patient is treated in a standing position with wide electron fields which are attained by the extended source to the skin distance (SSD). TSEBT was first reported in 1953 by Trumph et al.3 Subsequently, Europeans and Americans developed TSEBT. The most notable American series of TSEBT is from Stanford.4 In these case series, the clinical response rate and disease-free interval of MF patients treated with TSEBT are being described. Consent was taken from the patients for publishing their cases.

Case 1: A 36-year-old female presented to us in February 2014 with one-year history of multiple crusted skin lesions all over her body. On examination, she had generalised patchy erythroderma, crusted tumour lesion distributed all over her body (Figure-1). 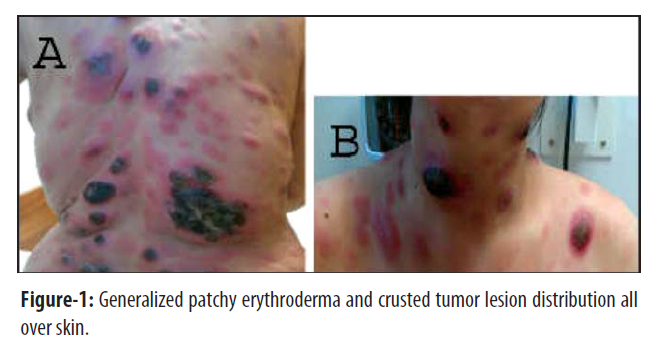 Biopsy from the lesion revealed T cell lymphoma, infiltrating the epidermis and superficial dermis. Immunohistochemistry stains were performed, which showed positivity for CD3 antibody. Staging work-up revealed multiple enlarged lymph nodes in both axillae, which were negative on biopsy. Further workup did not reveal evidence of any systemic disease along with the absence of atypical cells in circulation. Therefore, this patient was staged as stage IIB (T3N0M0B0). Her treatment started with TSEBT with oral Methotrexate 50 mg/week. Conventional high dose of radiation i.e. 3600 centi Grays (cGy) in 24 fractions with 1.5 Gy per fraction were delivered over 6 weeks. On follow-up, the patient had no clinical evidence of disease over the skin (Figure-2). She remained well for five months. Later she suffered from acute kidney injury and eventually died of sepsis. 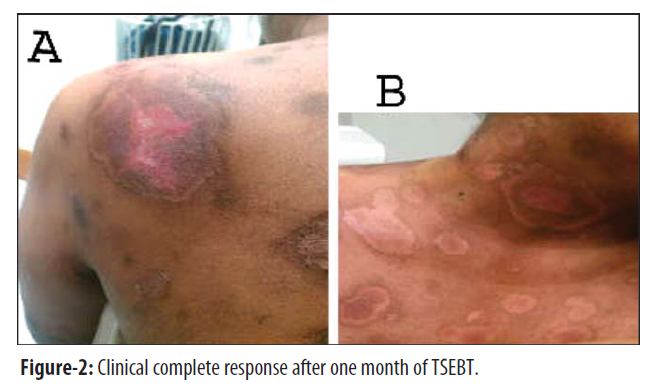 Case 2: A 43-year-old male presented to us in December 2016 with a six-year history of itching, hyper pigmented patches and ultimately skin thickening over his abdomen, upper and lower limb. He had been managed in the past for chronic dermatitis for one year. Later on, skin biopsy showed atypical dermal lymphoid infiltrates, positive for CD3, CD4, and CD8 antibody. The rest of the investigations were normal. Based on his clinical presentation and work-up, he was diagnosed as Mycosis fungoides stage 1B (T2N0M0B0). His treatment started with oral Methotrexate (MTX), 50 mg per week. During oral MTX, he developed liver function derangements, and the medication was stopped. Further, he was subjected to skin directed therapy with Broadband Ultraviolet B (UVB) Rays for two years, followed by Narrow-band UVB rays for the next 3 years. Initially, his disease responded to UVB rays but ultimately became refractory to it. Later, on follow-up, as the disease was localized to the skin, he was subjected to TSEBT. It has been thirty months since the diagnosis with no clinical evidence of any signs over the skin.

Case 3: A 21-year old adolescent male, presented to the dermatology clinic in January 2017 with dermal macular lesions, mild scarring, and erythema. Biopsy of skin lesions showed atypical lymphoid infiltrates in superficial dermis, mild epidermotropism and positive CD4 antibody. Staging workup and baseline labs were normal, and he was diagnosed as stage IIB (T3N0M0B0) MF. His treatment started with combination chemotherapy. Initially, his disease responded to chemotherapy but later on became refractory to it. He was subjected to TSEBT, 3600 cGy/24 fractions delivered over six weeks to the entire skin surface. Towards the end of the treatment, his disease responded partially to radiation therapy. The disease remained stable for two months. On further follow-up, the skin lesions showed progression. Therefore, systemic therapy was advised but he was lost to follow up.

MF is the most common subtype of cutaneous T cell lymphoma (CTCL). Among all skin directed treatments, electron beam irradiation is more penetrating into the skin depth, and is thus considered a reasonable initial therapy for T2-classified (i.e. generalised patch or plaque) and T3-classified (i.e. tumorous) disease. Initially, Trumph et al. validated the result of local control with TSEBT.4 Later on, several authors have showed the effectiveness of TSEBT in many studies. Results of complete response and long-term disease-free interval (DFI) after TSEBT depends on multiple factors i.e. the extent of skin involvement, characteristics of the lesions and radiation dose. We may offer patients a realistic chance of being cured if the disease is diagnosed in it's early stages.

This study aims to share our experience of TSEBT in the management of mycosis fungoides. We observed the cCR of disease in two of the three patients with clinical stage IIB and 1B, while one patient showed partial remission with the clinical stage IIB. Following the complete response of the disease to TSEBT, the DFI of the first patient with stage 1B (T2N0M0 B0) lasted 30 months while the second patient died after 5 months of completing treatment due to sepsis. Daniel Navi et al, reported the results of TSEBT for patients with MF with an initial complete clinical response of 75% and 47% for T2 and T3 disease, respectively.5 Bum-sup et al, reported lower disease-free survival rates with radiation in all MF patients who have a refractory disease with other modalities.6 Similarly, our patients who had been previously treated with other modalities have lower DFI with radiation.

The other factor which can affect the local control and DFI is the extent of disease, Quirós et al. reported the substantial impact of extensive T3 skin involvement on cCR and DFI.7 Similarly, our patients who had extensive (T3) skin involvement showed lower DFI with TSEBT.

European Organisation for Research and Treatment of Cancer (EORTC) has published consensus guidelines for optimal delivery of TSEBT and strongly recommends the use of the fractionated high dose for TSEBT.8 In our protocol, we use a high dose of radiation similar to the Stanford group, which has the most extensive experience with TSEBT in MF i.e. 36 Gy in 24 fractions with 1.5 Gy per fraction over 6 weeks. TSEBT is one of the integral components in the management of MF. It requires meticulous electron dosimetry with expert radiation treatment planning and delivery to patients. Availability of the equipment and expertise are required for performing this technique, which is not widely available in our part of the world. Therefore, the process of referral should be streamlined for patients who might require treatment with electron therapy. Many studies have been published in Pakistan on mycosis fungoides, but this is the first paper on outcomes of patients treated with radiation.9,10

TSEBT is an effective treatment for MF disease. Patients with early stage and limited disease are expected to have cCR along with longer DFI. The clinical outcomes of our patients are similar to those of other publications. This is the first study from Pakistan which discusses the outcomes of patients treated with TSEBT. This study can become a foundation for future extensive studies.