Prolonged jaundice in hepatitis-E patients: Going beyond the optics

Hepatitis E virus (HEV) is an RNA virus that is transmitted faeco-orally. Due to unhygienic living conditions and unsatisfactory treatment of drinking water, it is a major cause of acute viral hepatitis in Pakistan. Hepatitis E infection in patients with glucose-6-phosphate dehydrogenase (G6PD) deficiency may cause prolonged jaundice resulting in serious complications like, severe haemolysis, acute renal failure, encephalopathy and even demise. Although both these diseases occur frequently in our country there is a dearth of literature on the effect of Hepatitis E infection in G6PD deficient patients, leading to higher rate of complications in such patients.

We report the case of a 37 years old male who was referred to our hospital with worsening jaundice. Patient had HEV infection with concomitant G6PD deficiency. This case had a different prospect, since it resulted in prolonged jaundice and severe haemolysis. However the patient's condition improved with conservative management.

Hepatitis E infection is found widely throughout the world. According to the World Health Organization this virus causes about 20 million infections every year leading to about 3.3 million symptomatic cases. This infection resulted in more than 44000 deaths in 2015.1 The prevalence of Hepatitis E is especially high in southeast Asia, mainly due to poor sanitization and polluted drinking water.2 Pakistan has witnessed many Hepatitis E out breaks and about 20 to 22 % of population was found to have suffered from acute hepatitis due to HEV.3 Mostly it has a self limiting pattern that does not require aggressive treatment. However, HEV may have serious consequences in G6PD deficient individuals necessitating immediate management to avoid patient mortality.

Glucose-6-phosphatedehydrogenase (G6PD) enzyme deficiency is one of the most commonly recognized inherited X linked recessive enzyme deficiencies. In Pakistan the prevalence of G6PD deficiency is around 2%.4 G6PD plays an important role in hexose monophosphate (HMP) shunt pathway, in red blood cells (RBC) catabolism. More than 400 variants of this disease have been documented until now.5 The clinical expression of G6PD deficiency results in variable degree of haemolysis.6 G6PD deficient individuals mostly remain asymptomatic but they may suffer from severe haemolysis when exposed to antimalarial drugs, sulfa drugs or HEV infection. Haemolytic anaemia occurs as a complication in 23% of HEV infections; however 70% of HEV patients are likely to suffer from severe haemolysis if they happen to be G6PD deficient.7 A coexistence of HEV infection and G6PD deficiency in a patient may result in renal failure, severe anaemia, fulminant hepatic failure and hepatic encephalopathy. These conditions may be fatal for the patient if immediate critical care is not provided by the physician.8

A 37 years old male with no known comorbids was referred to the emergency department of National Medical Centre, Karachi in June 2021, with complaints of fever, weakness, yellow discolouration of eyes and loose stools for last 10-15 days. Prior to this admission the patient visited a local hospital in Larkana 3 months back due to same complaints. He was admitted there for 15 days and was given multiple antibiotics following which his yellow discolouration of eyes worsened. However, due to the deteriorating condition, the patient was referred to us.

On presentation at our hospital, he was deeply icteric and pale. Abdomen was soft with mild generalized tenderness. Liver was palpable 2 cm below the costal margin. Spleen was not enlarged and rest of the physical examination was un-remarkable.

Haematology review was obtained for persistently falling haemoglobin without any evidence of overt bleeding. Peripheral film was reviewed which showed polychromatic red blood cells along with bite & blister cells (Figure). Urine Detailed Report showed red cells. G6PD level was checked by Binax Now USA G6PD kit which was found be to deficient. 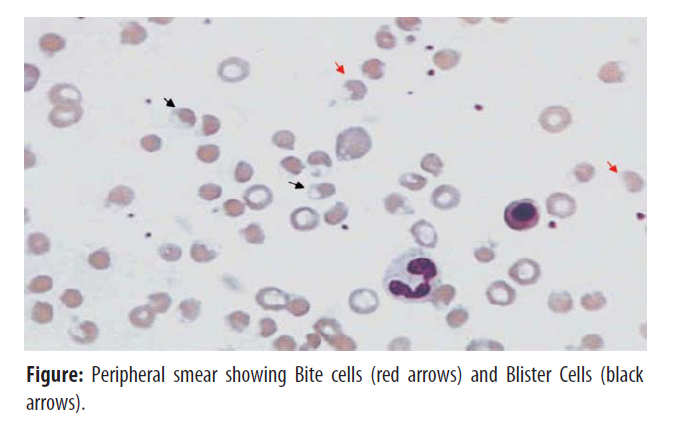 The patient was managed conservatively with aggressive hydration and folic acid suplementation. The drugs which are not safe in G6PD deficient patients and hepatotoxic medications were avoided. Renal function tests, electrolytes monitoring and correction was done accordingly.

Patient's condition gradually improved. Haemoglobin became static. His liver function test rechecked after 72 hours, showed total serum bilirubin of 13 mg/dl with a direct bilirubin of 12 mg/dl. The serum aspartate aminotransferase (AST) concentration was 150 U/L and the alanine aminotransferase (ALT) concentration was 103 U/L. The patient was discharged for home in stable condition. He followed up in OPD after 1 week with further improvement in haemoglobin and liver function test.

Acute viral hepatitis due to HEV infection is routinely associated with decreased red blood cell (RBC) viability and mild degree of haemolysis leading to a drop in haemoglobin levels by 1-2 g/dl. This slight haemolysis usually does not need any medical intervention and leads to little or no complications. However, this HEV induced haemolysis may become very severe in G6PD deficient patients.9 Major cause of haemolysis in G6PD deficiency is the decreased amounts of glutathione in RBCs. Glutathione in RBCs is essential for the protection against oxidative damage caused by free radicals and cell lysis. During the HEV infection greater quantities of free radicals are produced and in case of G6PD insufficiency RBCs become exceedingly prone to free radical damage leading to severe haemolysis and decreased haemoglobin in patients with coexistent HEV and G6PD deficiency.

In the case reported above, the patient was not diagnosed with HEV hepatitis in his first admission to another hospital. The persistently rising bilirubin and falling haemoglobin without any obvious cause, prompted us for workup of the Hepatitis profile along with G6PD levels. This lead to the diagnosis of HEV infection with coexistent G6PD deficiency. This helped us in the management of the patient and avoidance of harmful medications. Hence the complication of renal injury was avoided.

In patients with HEV infection with unexplained intravascular haemolysis, G6PD deficiency must always be excluded. Due to rapid haemolysis large amounts of haematin and bilirubin are produced that may get deposited in renal tubular cells leading to acute renal failure.10 Therefore renal function tests must be closely monitored to prevent renal complications. Nephrotoxic drugs like NSAIDs, aminoglycosides and antivirals must be avoided in such patients. Drugs that increase oxidation and free radical production e.g. sulfonamides, primaquine and nitrofurantoin must also be avoided.7

Diagnosis of G6PD deficiency may be challenging, as G6PD enzyme levels may be normal or borderline low, right after an episode of haemolysis or transfusion. G6PD levels may be falsely normal as old RBCs which are markedly deficient in G6PD get lysed quickly and the remaining younger RBCs have a slightly higher enzyme content. In order to confirm the diagnosis, peripheral blood smear must be analyzed for bite cells, blister cells, polychromasia, spherocytes and nRBCs. A follow up with fresh G6PD levels after 4-6 weeks of haemolytic episode is advised for actual representation of enzyme levels in RBCs. The patient must be explained his condition and advised to use clean drinking water in order to avoid reinfection with HEV.

Patients with previously undiagnosed G6PD deficiency may present with prolonged jaundice along with severe haemolysis if they have concomitant HEV infection. This condition requires competent multidisciplinary team of hepatology and haematology for urgent diagnosis and prompt treatment to avoid adverse consequences.

Conflict of Interest: None

A multi-disciplinary approach to the management of intra-venous and intra-cardiac leiomymatosis: A case report

A case of congenital methaemoglobinaemia with secondary polycythemia