Objective: To reveal the relationship between smoking cessation before surgery, pre- and post-operative anxiety, and pain among chronic smokers.

Method: The cross sectional prospective clinical study was conducted in 2018 on the east of Turkey, in Van Yüzüncü Yil University Dursun Odabaş Medical Center in city of Van. After approval from the ethics committee participants of either gender aged 20-60 years scheduled to undergo rhinoplasty surgery and graded as American Society of Anaesthesiologists I–II were included. The participants were categorised into smokers group S and non-smokers group NS. Spielberger State-Trait Anxiety Inventory values for preoperative period, postoperative 0, which is the moment when the modified Aldrete score is >9, as well as for 2, 4 and 6 hours, and visual analogue scale values for the postoperative 0, 2, 4 and 6 hours were recorded. Data was analysed using SPSS 26.

Smokers account for at least 30% of patients who undergo operations at any time, and they are more likely to experience perioperative complications than non-smokers.1 Smoking causes 20% increase in hospital mortality and 40% in major postoperative complications.2 Cessation of smoking before surgery can reduce these risks.3,4

Anxiety is among the most common withdrawal symptoms experienced when attempting to quit smoking.5 Nicotine has acute anxiolytic effects6,7and those experiencing anxiety symptoms are more likely to use cigarettes as a tool to regulate their mood.8 It is known that between 25% and 80% of patients admitted to hospital for surgery experience preoperative anxiety9-11and anxiety adversely affects the recovery of the patient.12-14Data shows that the postoperative recovery process is more painful, slower and more complex in patients with high preoperative

anxiety.15-17The State-Trait Anxiety Inventory (STAI) scale is recommended for measuring patient anxiety in the preoperative phase and is considered the gold standard for the assessment of preoperative anxiety.18

Pain is an inherently subjective and disturbing experience, consisting of sensory-physiological, cognitive-evaluative, and motivational-emotional components.19 Pain can also reinforce smoking behaviour through a number of mechanisms. It has been reported that smokers may experience more pain during withdrawal periods.20 There is a reciprocal cycle between pain and smoking.21 More pain may result in more cigarette addiction. It has been suggested that smokers who experience more pain and negative effects related to pain during the attempt to quit smoking may switch to smoking to partially alleviate their increased pain sensitivity. Pain scales are useful for the assessment of postoperative pain and for monitoring the effectiveness of treatment. The visual analogue scale (VAS) is the most commonly used instrument.22 There is evidence that pain, smoking, and anxiety are common and co-morbid, and that these negative emotions are interrelated.23

The current study was planned to evaluate the effect of preoperative smoking cessation on preoperative anxiety and postoperative pain and anxiety scores in chronic smokers.

This cross sectional prospective clinical study was conducted in 2018 in Van Yüzüncü Yil University Dursun Odabaş Medical Center in city of Van. After approval from the ethics committee (Approval No. 05;01/17/18) patients of either gender aged 20-60 years scheduled to undergo rhinoplasty surgery and graded as American Society of Anaesthesiologists I–II24 were included. The participants who were ASA III and above, had chronic systemic disorders, admitted due to emergency and bleeding, had cardiac or neurological disorders, or refused to participate were excluded. The sample of this prospective clinical study was determined by the (Population Volume) Unknown Sample Calculation Formula. The minimum sample size was calculated as n=118.6. Thus, considering the study process, a study with 120 patients was envisaged.25

The participants who volunteered to participate and furnished written consent were informed about the study during their preoperative visits 20 days before their operations. The participants were categorised into smokers group S and non-smokers group NS. Subjects who were smokers were asked if they could quit smoking 2 weeks before their surgery. They were told that this would reduce the pulmonary complications that may occur during surgery and contribute to the literature through the current study. Those who could not abide by the request were asked to inform the study team, and they received no negative feedback for their inability to comply.

STAI18 test was administered to all the patients one hour before their operations. Since rhinoplasty is not a painful condition before surgery, VAS22 score was not checked in the preoperative period. The participants underwent standard general anaesthesia (2 mg/kg propofol, 3µg/kg fentanyl, 0.6 mg/kg rocuronium, 2.5 minimum alveolar concentration [MAC] sevoflurane), and rhinoplasty was performed by the same surgeon. Half-an-hour before extubation, 20 mg/kg paracetamol and 1mg/kg tramadol were administered to both the groups for postoperative analgesia. VAS and STAI scores for postoperative 0, which is the moment when the modified Aldrete score is >9, as well at 2, 4, and 6 hours were recorded. Service nurses were told to record the time of administration for patients who needed analgesics and postoperative first 6-hour evaluation scores and records kept by the nurses were examined and the findings were statistically evaluated. 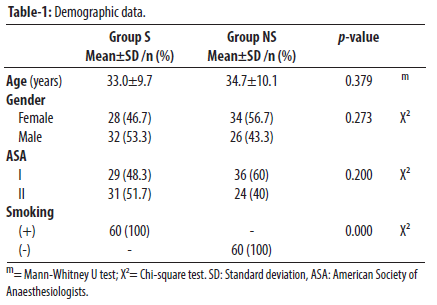 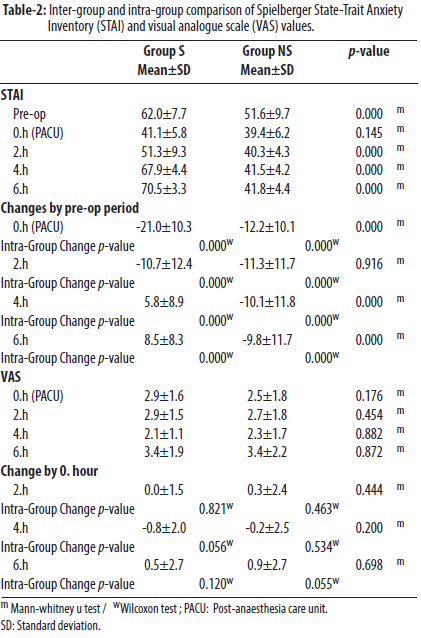 In intra-group evaluations, no significant changes were detected between STAI values for postoperative 2 hour and the preoperative values (p˃0.05). However, a significant difference was identified for hours 4 and 6 (p˂0.05). While STAI values for postoperative 4 and 6 hours increased in group S, corresponding values decreased in group NS (p˂0.05). No significant changes were identified during intra-group evaluations (p˃0.05) (Figure). 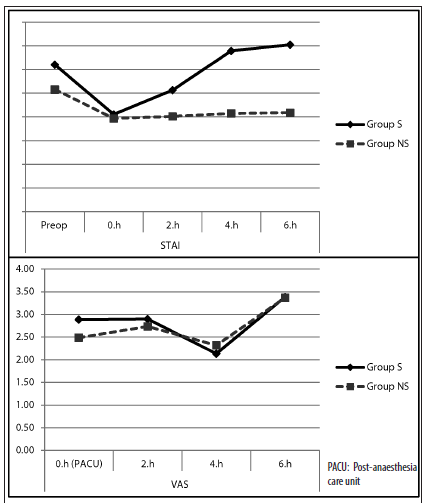 In the present study, preoperative STAI values for both groups were high. These findings were related with anxiety of surgery and anaesthesia. Nevertheless, the study’s results were original in that the statistically significant levels of anxiety in group S indicated that smoking cessation was favourable. The absence of any difference between the groups during at 0-hour STAI assessment at the post-anaesthesia care unit (PACU) could be attributed to a lack of recovery from anaesthesia or the participants’ avoidance of answering lengthy questions. Although the 0-hour anxiety values were lower than the preoperative values in both groups, the fact that these findings were more significant in group S indicates that the participants had considerable levels of cigarette deprivation during the preoperative period. It was thought that the increase in STAI scores at the 4th and 6th postoperative times may be related to recovery from anaesthesia and smoking cessation. These results contribute characteristic findings to the literature.

Another issue to consider is that pain can cause anxiety. It is known that preoperative anxiety can often cause postoperative pain and anxiety.34 There are bidirectional pathways where pain and smoking contribute to one another.32,35The smoking rate can vary by as much as 30-68% among patients with pain.1 Chronic smokers can also experience a greater sensitivity to pain during periods of smoking cessation.37 The present study examined VAS values to determine if pain can impact anxiety during the postoperative period. The VAS is a popular tool for measuring pain. It consists of a horizontal 10cm line, with its extremes designated as “no pain” and “worst pain imaginable.” Each patient marks the pain level, and the distance from “no pain” on the far left side of the scale is measured in cm, yielding a pain score from 0 to 10.38

In the current study, no significant differences were found between the groups’ pain assessments with VAS. While there were no significant differences between the VAS values for the 2nd, 4th, and 6th hours between the groups, the STAI values were significantly higher in group S. This finding was believed to be associated with cigarette abstinence and to be independent of pain. In addition, although there were no statistical differences between the VAS values, the higher pain rankings in group S were connected to hyperalgesia caused by smoking. There has recently been an increase in publications focussing on anxiety, pain and smoking. Both pain and anxiety have been shown to motivate smoking behaviour, and smoking has been found to increase anxiety and the perception of pain.39,40

The current study has a few limitations. It did not consider how smoking frequency affected anxiety or pain scores. In order to establish a specific standard in the study, a baseline of a certain duration of smoking and quantity of cigarettes should be established. Nonetheless, previous studies have revealed that varying cigarette quantities and durations produce different postoperative effects.26 Besides, the current results may have been affected by the different varieties of cigarettes that patients smoked as the contents of individual cigarette types are unique. Also, the current study was only performed on ASA I-II patients, and future studies should look at patients graded ASA III and above which may produce different results. Finally, because the study was conducted at a single centre, any generalisation of its results may be incorrect.

The current study, however, has produced secondary outcomes. Since patients are more likely to comply with a study’s requests in the preoperative period, long-term smoking cessation may be achieved if patients are asked to stop smoking during this period. Future studies may explore the subject further with follow-up care about postoperative pulmonary complications and other issues.