Objective:  To investigate the psychosocial factors having an impact on persons with a stuttering problem.

Methods: The correlation study was conducted from October 2016 to February 2018 at hospitals, speech clinics and educational institutes of Lahore. The sample comprised of young adults aged 16-30 years of either gender with stuttering problem. Data was collected using Stuttering Severity Instrument-4, Social Interaction Anxiety Scale-Urdu, Big Five Measure-20, Overall Assessment of the Speaker’s Experience of Stuttering and the Urdu version of the shortened form of the Coping Orientation to Problems Experienced inventory.  Data was analysed using SPSS 23.

Results: Of the 78 subjects, 66(84.6 %) were males and 12 (15.4 %) were females. There were 21(27%) subjects aged 16-19 years and 57(73%) with age range of 20-30 years. The overall mean age was 21.96±3.89 years. Mean age of onset was 4.59±1.29 years, while gradual onset and progressive stuttering was reported by 74(94.9 %). The Bilingual users 49(63%) reported to have frequent stuttering. Among the 43(55.1%) who had received treatment, 30(38%) received speech therapy and 26(33.3%) reported dissatisfaction. Stuttering severity and social anxiety were significantly positively correlated with all domains of impact of stuttering (p<0.05). Age, and duration were negatively correlated with day-to-day communication (p<0.05) and previous speech treatment showed negative association with impact on general knowledge about stuttering (p<0.05). Avoidance coping strategy had a significant relationship with all domains of impact (p<0.05).

Conclusion: Severity of stuttering and social anxiety were found to have repercussions on people who stuttered, while avoidance coping was practised more to deal with the negative impact on reactions toward stuttering and quality of life.

Developmental stuttering is referred to as a fluency disorder with onset in childhood without any sensory, speech motor (apraxia) and neurological impairment, like brain injury, stroke and tumour. Onset is mostly gradual between 2 and 7 years with repetition of sounds and initial words. 1 Persistent disfluent speech may continue to develop after 8 years and is generalised with marked frequent repetition, prolongation of syllables and silent block in most of the speaking situations. 2 Since adolescence, fear of stuttered words, social avoidance and secondary symptoms (word substitution, limited lexical diversity, excessive body language i.e hand movements and lack of eye contact etc.) take the form of advanced stuttering. 2, 3 Difficulty in fluent communication in daily conversation and negative social experiences put the speaker in emotional distress. 4 Complexity of speech difficulty leads to psychosocial complications experienced by the persons who stutter (PWS). Stuttering severity has been strongly associated with the psychosocial impact5 and other psychological outcomes, like self-esteem, self-efficacy and life satisfaction. 6,7 The speech failure and anxious manifestation during stuttering block exacerbate the disfluency1 and stuttering episodes increases the anticipation and anxiety becomes intriguing to the extent of the anxiety specific to speech situations and generalised social anxiety. 8,9 In addition to stuttering severity and social anxiety, another important determinant is the coping mechanism. Coping refers to strategies to handle the stressful event; either emotion-focussed or problem-focussed. 10 Researchers identified action-based coping responses referred to as problem-focused coping to deal with stuttering. Other non-action responses were found to be emotion-focused and avoidance coping being ineffective in managing stuttering. 11, 12 Integrated treatment warrants the attention of clinicians to target both speech and psychosocial factors to maximise the therapy effect. 13

The current study was planned to investigate the psychosocial factors having an impact on PWSs.

The correlation study was conducted from October 2016 to February 2018 at hospitals (Shaikh Zayed, Rashid Latif hospital), speech clinics (Help foundation, ENT Head Neck Surgery Institute, Gulberg) and educational institutes of Lahore (University of the Punjab, Lahore College for Women, Garrison University, Riphah International University, Lahore campus) after seeking permission from HOD of each institute. After approval from the Advanced Studies and Research Board (ASRB) which is an ethical review committee. The sample size was calculated using G-power calculator with 90% power and medium effect size at 0.05 alpha level. 14 The sample was raised using purposive sampling technique from among potential subjects at hospitals, speech clinics, and educational institutions. At hospitals and speech clinics, participants were referred by speech therapists, and formal permission was taken from the relevant authorities. For academic institutions, flyers documented with purpose of the study and contact detail of researchers were pasted on notice boards. The flyer was also shared on social media to approach the community. The sample included young adults aged 16-30 years of either gender with fluency disorder, which is developmental stuttering. The onset age had to be before 12 years (must be between 3 to 8 years). Those with acquired stuttering types, like psychogenic and neurogenic, were excluded to make the sample homogeneous. Psychogenic is rare and neurogenic stuttering has additional neurological complications. Those with other speech / language or hearing impairment were also excluded. Data was collected after taking informed consent from all the participants.

Data-collection tools included Stuttering Severity Instrument-4 (SSI-4) 15which has high internal reliability (α=0.82) and was administered to confirm the diagnosis and stuttering severity. The Urdu version of Social Interaction Anxiety Scale (SIAS) 16 which has high internal reliability (α=0.89) was used to asses social anxiety.  The Urdu version of the shortened form of the Coping Orientation to Problems Experienced (Brief-COPE) inventory17 was administered to measure coping. The 14 subscales of the inventory were grouped in four factors: social support, problem-solving, avoidance coping and positive thinking. 18 It’s internal reliability found on the present sample was satisfactory for all factors (range: α=0.63-0.75). Extroversion and emotional stability, which are personality traits, were assessed using the Big Five Measure-20 (BFM-20) questionnaire19 found to have an adequate internal reliability (α=0.77; α=0.55). High scores on extroversion means sociability, and low scores on emotional stability indicates neuroticism. The impact of stuttering was measured on four domains: general information, reactions to stuttering, communication in daily lives and quality of life (QOL), measured by the Overall Assessment of the Speaker’s Experience of Stuttering (OASES) tool. 20 The internal reliability calculated for the present sample was high for all domains (range: α=0.91-0.96). Translation and linguistic validation of BFM-20 and OASES in Urdu language was done in accordance with guidelines given by Mapi research institute. 21 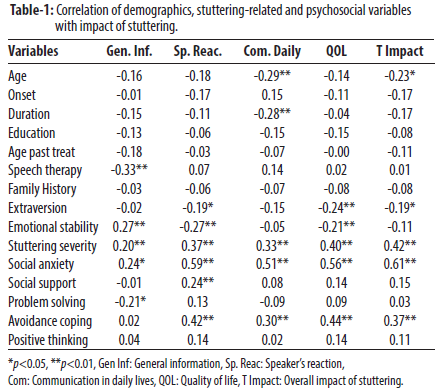 After preliminary correlation analysis, a series of hierarchical regression analysis was employed for each OASES domain and the covariates were entered in model 1 that showed significant correlation with outcome variable, while in block 2 had predictors, like stuttering severity, social anxiety and coping strategies. Findings showed that stuttering severity and social anxiety exacerbated the negative experiences of PWSs; they tended to have less knowledge-seeking attitude about the speech problem, precipitating factors and relevant treatment; there was more sabotaging behavioural action, emotions and thinking patterns associated with disfluent communication and frequent difficulty in most communication situations; and there was perceived decline in QOL (Table 2). The representation of model with emerged predictors of each domain of OASES is given in Figure. 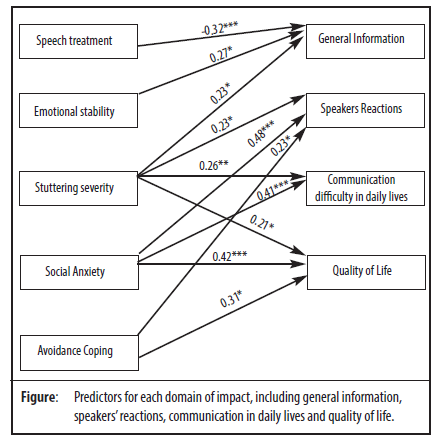 The findings showed a significant relationship of stuttering-related factors (duration, previous treatment history) and current age with one domain on OASES. Duration of stuttering and current age had a significant negative relationship with the domain of communication in daily lives and depicted less effect on the speaker. This might help the speakers to accept the disfluent speech and adopt an avoidant lifestyle experiencing less impact of stuttering. 2 Similarly, history of speech treatment also appeared to have lesser effect on speakers’ knowledge-seeking behaviour. However, according to regression analyses, stuttering severity reflected stronger determinant in causing negative influence. Stuttering severity was only found as a strong predictor of each domain of impact, depicting the debilitating effect of disfluent speech on the speakers’ life. Previous findings support the current study. 7,9,22,23 It is clear that speakers encounter more stuttered speech when they experience heightened anticipatory anxiety and it continues in a vicious cycle. The current study also showed that PWSs employ the maladaptive coping mechanism in managing disfluent speech, physical and emotion tension and in dealing with stress after speech failure. Since stuttering is uncontrolled and involuntary, and cause frustration for the speakers, avoidant behaviours are developed to control stuttering. 24 Emotion-focused and avoidant coping are the most practised coping strategies to manage the distress. 11,25 However, like stuttering severity, emotion-focused and avoidant coping are strongly associated with impaired QOL. 26,27 Personality traits of extroversion and emotional stability were assessed as a covariate, but did not show significant impact except for the fact that emotional stability predicted impact on general information. Future studies are needed to explore the mediational role of personality traits with other outcome variables to understand the psychosocial determinants of the effect of stuttering mediated by personality.

Disclaimer: The text is based on a PhD research that comprised three studies.

Source of Funding: Lumpsum Provision for Research 2015-16 funded the purchase of the study questionnaires.