Objective:  To see if automatic negative thoughts contributed to conversion disorder in adults.

Method: The case-control study was conducted in Lahore and Faisalabad, Pakistan, from February 2017 to September 2019, and comprised adult patients of either gender diagnosed with conversion disorder at hospitals and private clinics in the two cities. Healthy adults without conversion disorder were recruited from the same cities. Data was collected using a semi-structured brief interview form and the Urdu version of the 30-item Automatic Thoughts Questionnaires (ATQ-30). Data was analysed using SPSS 22.

Results: Of the 150 subjects, 75(50%) each were cases and controls. Overall, there were 54(36%) males and 96(64%) females. The cases reported more automatic negative thoughts than the controls (p<0.001). Besides, negative automatic thoughts related to helplessness and low self-esteem were reported by both the cases and the controls (p>0.05).

Conclusion: Automatic negative thoughts contributed to the development of conversion disorder in adults.

Thoughts have major importance in the development of mental illnesses. Some thoughts or cognitions automatically occur in the mind.  Such automatic thoughts are basically a person’s inner dialogues and self-statements which are repeatedly said to one’s own self in certain situations. 1

Thoughts may influence the individual’s functioning and behaviour. Literature documented dysfunctional and distorted cognitions as the leading cause to maladaptive functioning, whereas connected logical and pragmatic cognitions with adaptive functioning. 2 The assessment of negative and positive cognition is expedient in determining the health pathology relationship. 3

Conversion disorder (CD) is referred to as functional neurological symptoms disorder in which patients report neurological and bodily complaints, including altered motor and sensory functions. 11 Studies done in Pakistan reported children and young people suffering from CD with varying symptoms. 12 Problem with primary support group was the most common stressor for having CD. 13 Previous researchers discussed psychodynamic, socio-cultural perspectives, family environment, literacy level and socio-economic background in explaining the causes and nature of CD. 14 A study from Pakistan showed adults with CD exhibiting higher dysfunctional attitude than healthy individuals. 15

There is a dearth of scientific literature directly demonstrating the link of cognitions or thoughts with CD. The current study was planned to see if automatic negative thoughts contributed to CD in adults.

The case-control study was conducted in Lahore and Faisalabad, Pakistan from February 2017 to September 2019 after having approval from Ethical Review Committee of affiliated institution The sample size was calculated using G-Power calculator16 with large effect size 0.8 and statistical power 0.95 at alpha level 0.05. Convenience sampling technique was used to enrol patients with CD, while healthy controls were recruited from the general population using snowball sampling technique. Those included were adults of either gender aged >18 years having minimum educational qualification till the tenth grade (matriculation). For adults with CD, the diagnostic criteria mentioned in the Diagnostic and Statistical Manual of Mental Disorders, Fifth Edition (DSM-V) was considered at the time of selection.

Those suffering from co-morbid conditions, like diabetes, hepatitis, hypertension, asthma, cardiac problem, infertility or physical disability or any other physical illness, or having any form of mental health disorder were excluded.

CD subjects were approached with the permission of mental health professionals and hospital administrations (i.e, Mayo hospital, Gangaram hospital, Services hospital, Shalimar hospital, etc). Informed consent was obtained from all the subjects. A semi-structured interview form was predesigned to gather data about personal information, including name, age, socio-economic status, family system, number of family members, marital status with number of children and residency. The form also gathered information related to CD, such as diagnosis along with its onset, intensity, symptoms and treatment procedure. Their diagnosis was confirmed from clinical case reports available in the hospitals and clinics where the subjects were registered for treatment.

The Urdu version of the 30-item Automatic Thoughts Questionnaire (ATQ-30)3 was used to assess automatic negative thoughts. ATQ-30 has four subscales; personal maladjustment/desire for change, negative self-concept/ negative expectations, low self-esteem, and giving up/helplessness. It is scored on a 5-point Likert scale, ranging from 1 = not at all to 5 = all the time. Reliability of the English version of full ATQ-30 is 0.97 and that of the Urdu version is 0.84.17

Relevant data using the same tools was collected from the healthy cases as well. 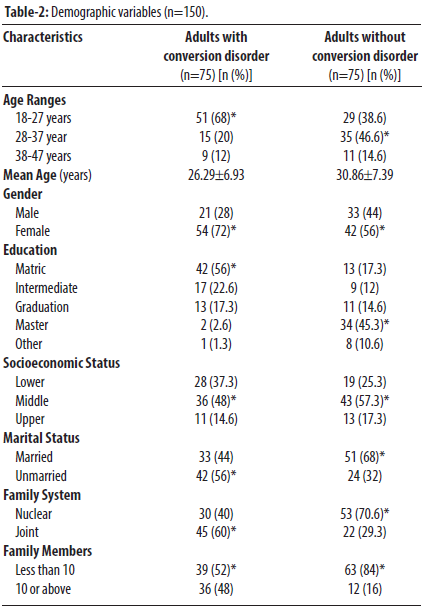 The study found that CD adults reported more automatic negative thoughts related to personal maladjustment/ desire for change compared to adults without CD (Table 3). Previous studies revealed that CD adults remained disturbed due to stressful environment and disturbed life patterns. 18 They are unaware of their needs, motives and desires. 18 But at the unconscious level, they have a strong desire to get rid of the problematic environment, but critical and problematic learning environment makes them disturbed and frustrated, resulting in maladjustment at personal level. 19 This was also found in the current study.

In the present study, CD adults reported more automatic negative thoughts in terms of self-concept/negative expectations. Previous studies showed a close link between self-concept and psychopathological symptoms. 20 People with clear self-concept exhibit coherence in their identity, more confidence, consistency and stability in their attributes. 21 CD adults might struggle to sustain stability in such attributes and that becomes a source of continuous tension. Resultantly, this psychological tension gets converted into bodily symptoms, as noted in the present study.

However, CD adults in the present study showed a non-significant difference in relation to low self-esteem and giving up/helplessness when compared with adults without CD.  Self-esteem is a psychological attribute associated with self-judgment. 22 Self-esteem determines how a person values one’s own self. Various factors influence self-esteem, such as socio-economic status, 23 independence, 24 age-related challenges and financial constraints, 25 social media usage26 and family functioning. 27 Thus, it can be inferred that self-esteem of all participants of the present study, irrespective of their CD status, might have been influenced by different factors or stressors that surrounded their life.

Another sub-variable of giving up or helplessness is denoted by the person’s inability to stand firm against personal and environmental problem. Helplessness encompasses feeling of having no control over environment. 28 Resultantly, all the participants might have felt more helpless as they could not control problematic situations and environmental issues, as was noted in the present study.

The pesent study, however, has limitations, as the relationship of demographic attributes with CD was not assessed. Specification of symptoms was not done and patients with all kinds of symptoms were recruited. Moreover, CD severity was not considered. Thus, in the light of these significant limitations, it is suggested that further studies are needed to study the subject more broadly for more valid findings.

Automatic negative thoughts were found to be a significant contributing factor to CD in adults.