Objective:  To translate into Urdu and validate the Big Five Inventory 10.

Method: The study was conducted at a tertiary care hospital in Kharian Cantonment, and a university in Gilgit, Pakistan, from October to December 2020. Online video meetings were held for the translation process related to the Big Five Inventory 10. A systematic six-step process was followed for translation and validation. The volunteers recruited for the pilot and validation phases were from various different administrative regions of the country. Convergent and discriminant validity to assess construct validity, and Cronbach’s alpha was calculated to assess the reliability of the scale. Data was analysed using SPSS 23.

Results: Of the 500 subjects, 358(71.6%) were males and 142(28.4%) were females. The overall age range was 18-48 years. The Urdu version was of the Big Five Inventory 10 was found to have a high level of construct validity supported by convergent and discriminant validity (p<0.05). The Cronbach alpha for all the sub-scales fell in the conventional range (0.71-0.88). Females scored higher on the ‘agreeableness’ subscale than the males (p<0.0).

Conclusions: The Big Five Inventory 10 Urdu version was found to be a valid and reliable tool for researchers and clinicians having time constraints.

The personality of a person is the canvas on which the painting of his life is drawn, as noted in a class by Prof. Mowadat H. Rana while delivering a lecture on grading training in psychiatry on Nov 11, 2003 at Rawalpindi, Pakistan, (unreferenced). It is the “individual differences in characteristic patterns of thinking, feeling and behaving” of a person. 1

For centuries, scientists had been trying to explain human personality with different theories. The five-factor model of personality is one such contemporary popular theory. It takes into consideration the traits of ‘openness to experience’, ‘conscientiousness’, ‘extraversion’, ‘agreeableness’ and ‘neuroticism’. 2

Personality assessment has remained an integral part of psychiatric examination and psychometrics. IIts use has now become widespread and essential in hiring, aptitude testing, adult learning and tasking. 3

Not everyone was conversant with the techniques that the mental health professionals used, and this was the reason why personality assessment inventories were developed. Most of them were quite lengthy, and required taking the student, or a worker, out of his workplace for a few hours in most cases. 4

For people who were not well conversant with the English language, very few of these inventories were translated and validated in Urdu. The time factor, however, remained a major issue. For such individuals, who may number in millions, hope came in the shape of the Big Five Inventory 10 (BFI-10), a short inventory for personality assessment, which was based on the original BFI, which was developed in 1991 having 44 items. 5 Due to the mounting demand of an even ‘quicker’ tool, a shorter version with only 10 questions was developed, with 2 questions taken from each of the BFI traits that represented the highest and the lowest pole of each domain. 6 Developed simultaneously in English and German languages, the developed instrument had a validity and reliability comparable to the original 44-item instrument. Since then, the scale has been translated into various languages. 6

Urdu is spoken and understood by most people in Pakistan, a country with a population of 220 million. It is understood, read and spoken in other countries, too, where people from the subcontinental origin dwell. 7

Just like any other language and its cultural dynamics, people who speak Urdu, or who have Urdu as their mother tongue, may or may not be able to speak other languages, but they, too, harbour emotions, thoughts and characteristics that they could best describe in their own language. The current study was planned to translate into Urdu and validate the BFI-10 instrument.

The study was conducted at a tertiary care hospital in Kharian Cantonment, and a university in Gilgit, Pakistan, from October to December 2020. After approval of institutional ethics review committee of Combined Military Hospital Kharian Cantonment, and written permission from the relevant authors, the previously tested methodology of the American Association of Orthopaedic Surgeons8 (AAOS) was utilised, involving five stages of translation. This was followed by the validation phase.

First of all, two translators, one of them being a psychiatrist, produced two different drafts after Urdu translation. The second one was a professor of English Literature who did not know the reason for the exercise. They also discussed some difficulties encountered during their task with a third ‘subject expert’ in an online meeting. This included mainly the appropriate phrasing of the instructions. Both the translated versions were merged together after resolving conflicts and differences. To achieve the content validity of the inventory, two bilingual university faculty members then did a back-translation. They, too, were kept blind to the purpose of the task. These two had not been provided with the original English version of BFI-10. The back-translation was found optimally similar to the original version.

In stage four, all the aforementioned individuals met in an online video meeting, discussed all the difficulties faced, and deliberated their resolution. The final draft was thus completed, which was yet again forwarded to an Urdu language expert to improve its face validity (Figure). 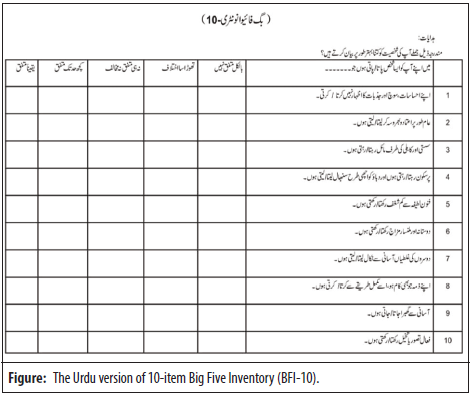 A major difference in the two languages was that with a common starting sentence in the original English version, all 10 statements that followed were expressed in very few words, including a minimum of one in point 1. This was not possible in the commonly used Urdu language. It would have been possible to use fewer high-end / difficult words, but that would have narrowed the scope of the inventory to a very few highly educated individuals. We used simple and easy-to-understand words that could be comprehended by common man. We were finally able to finish the procedure with a single sentence in Urdu for each point of the instrument.

The pilot study was conducted on healthy individuals of either gender who were students, teachers, physicians and people who were just accompanying patients to the hospital at the tertiary care hospital. They were enrolled using convenience sampling method over 5 working days. Those who furnished informed consent, were included. The subjects hailed from different administrative regions of the country and therefore represented the participation of all major ethnicities. They were asked about any difficulty reading or understanding the questionnaire. None reported any difficulty.

For the validation part, purposive sampling technique was used to recruit healthy volunteers belonging to different administrative regions of the country, thus expanding the diversity of the inputs. Basic demographic data was collected from the subjects who were male and female adults from different professions and organisations. Researchers also collected data from housewives through door-to-door visits, thus ensuring the heterogeneity of the sample to improve the generalisability of the findings. This process took a month.

Data was analysed using SPSS 23. Cronbach’s alpha values were calculated to assess the reliability of BFI-10. Translation and validation of an instrument from one language to another, involve some peculiar steps. We ran a ‘pilot’ study on fifty individuals, as the final step of the translation process.8 After this pilot study, we conducted the ‘Validation ‘exercise on 500 subjects. Hence both ‘Pilot’ and ‘Validation’ exercises / studies took place.

The Urdu version was of the BFI-10 was found to have a high level of construct validity supported by convergent and discriminant validity (p<0.05). The Cronbach alpha for all the sub-scales fell in the conventional range (0.71-0.88).

Females scored higher on the ‘agreeableness’ subscale than the males (p<0.0) (Table 2).

The reliability of BFI-10 Urdu version was assessed using Cronbach’s alpha. As a general principle, the Cronbach’s alpha of 0.6-0.7 is considered an acceptable level of reliability, and 0.8 and above is considered a very good level of reliability19 but values >0.95 are not necessarily good and might be a sign of redundancy.20 A study21 recommended a minimum level of 0.7, and another22 described a representative level of 0.77. In the present study, Cronbach’s alpha values for all subscales of BFI-10 Urdu version fell well within the acceptable range, i.e., neither too high (>0.95) nor too low (<0.6).

A French study23 reported findings almost similar to those in the current study.