Methods: The retrospective study was conducted at the Shaukat Khanum Memorial Cancer Hospital and Research Centre, Lahore, Pakistan, and comprised data from January 2012 to January 2018 of paediatric patients diagnosed with precursor B-cell acute lymphoblastic leukaemia. Data of patients having t(1;19) translocation with or without complex karyotype formed group A, while data of patients without any cytogenetic abnormality formed the control group B. Relapse and event-free survival were calculated and the outcomes were compared between the groups. Data was analysed using SPSS 20.

Conclusion: There was no significant difference related to outcomes of precursor B-cell acute lymphoblastic leukaemia patients having t(1;19) translocation with or without complex karyotype and those without any cytogenetic abnormality, indicating that translocation t(1;19)-positive patients do not need treatment intensification.

Acute lymphoblastic leukaemia (ALL) is one of the most common childhood cancers, and over the years, ALL outcomes have improved manifold due to the introduction of intensive chemotherapy regimen.1 This success has only been possible due to the better understanding of the nature of paediatric ALL and modification of therapy as per the cytogenetics. Numerous chromosomal aberrations, cytogenetic abnormalities have been identified in precursor B and T cell lymphoblastic leukaemia, that have special correlation with the clinical presentation and treatment outcomes , hence chromosomal analysis are routinely performed as cytogenetic abnormalities play an important role in risk stratification and treatment of choice.2 Precursor B-cell (Pre-B) ALL is associated with many cytogenetic abnormalities that are important prognostic factors.3 The common chromosomal translocations seen in paediatric Pre-B ALL are t(8;21) TEL-AML1, t(1;19)(q23; p13) E2A-PBX1, t(9;22) BCR-ABL, t(15;17), t(4;11) MLL-AF4.4

Translocation t(1;19) (q23; p13) is the second most commonly seen chromosomal translocation, and it fuses the gene coding the basic helix-loop-helix transcription factor TCF3 with the gene coding  the homeodomain protein PBX1.5 It affects the cellular differentiation and results in malignancies.6 It was once considered a high-risk chromosomal abnormality associated with poor prognosis, but with better understanding and modification of  chemotherapy protocols, it is no longer considered as one, and does not require intensified therapy.7 Fewer studies regarding cytogenetic variations have been reported from Pakistan. MS Shaikh et al. reported the incidence of translocation t (1;19) about 1.4% among children diagnosed with Pre-B ALL.8 The current study was planned to evaluate the impact of translocation t (1;19) in paediatric Pre-B ALL cases in terms of outcomes in a Pakistan population.

The retrospective study was conducted at the Shaukat Khanum Memorial Cancer Hospital and Research Centre (SKMCH&RC), Lahore, Pakistan, and comprised data from January 2012 to January 2018. SKMCH&RC is a trust organisation where oncology patients get treatment from all over Pakistan.

Flowcytometry or immunohistochemistry (IHC) were used to determine the blast cells immunophenotype using either peripheral blood or bone marrow samples. Surface staining was tested with antibodies against, cluster of differentiation (CD)3, CD4, CD5, CD7, CD8, CD10, CD13, CD16, CD19, CD20, CD33, CD79a, CD11b, CD38, CD14, myeloperoxidase (MPO), terminal deoxynucleotidyl transferase (Tdt), and human leukocyte antigen-DR isotope (HLA-DR).9 At least15-20 metaphases were analysed and chromosome identification and karyotyping was based on the International System for Human Cytogenetic Nomenclature (ISCN) guidelines.10 Patients with t(1;19) (q23;p13) were classified as having balanced or unbalanced translocation.11 Since the E2A-PBX1 fusion gene is not measured at the study site, it is not a part of the current study.

The initial risk stratification of patients was based on age and white blood cell (WBC) counts as per the National Cancer Institute (NCI); age 1-10 years and WBC <50x109/L were stratified as standard risk, while age ≥10 years and WBC >50x109/L indicated high risk.12 Treatment was given as per the United Kingdom Acute Lymphoblastic leukaemia (UKALL) 2011 guidelines.13 Cytogenetics were reported 2 weeks after the initiation of induction therapy, but treatment was not intensified for patients with t(1;19). End-of-induction assessment was based on minimal residual disease (MRD) or the blast count in bone marrow where MRD was not available.

Data was analysed using SPSS20. Descriptive statistics were reported as frequencies and percentages for quantitative data, like age, WBC count at presentation, and qualitative data, like gender. Chi-square test was applied to assess the relationship between disease parameters and outcomes. Survival analysis was done using the Kaplan-Meir curve method. Event-free survival (EFS) was calculated from the date of diagnosis till death due to disease, progression of disease, relapse, and abandonment of treatment. Log-rank test was applied on the survival curves. P ≤ 0.05 was deemed significant. 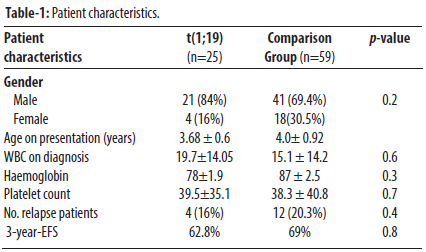 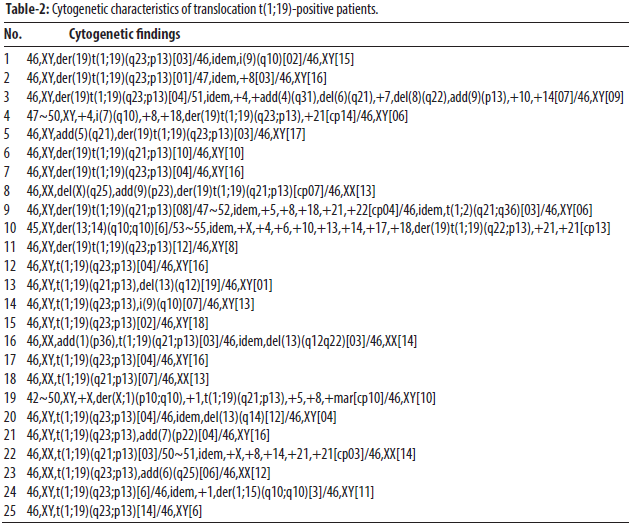 MRD, assessed at day 30, was negative in 17(%) cases in group A, whereas in 8(%) cases, bone marrow trephine examination was used to measure the disease status which was in remission. The median follow-up time was 43 months (SD±30.5) (interquartile range-(IQR)60). The 3-year EFS had no significant difference between the two groups (p>0.05) (Figure 1). Also, no significant difference was seen in EFS between cases of balanced and unbalanced translocation t (1;19) (Figure 2). 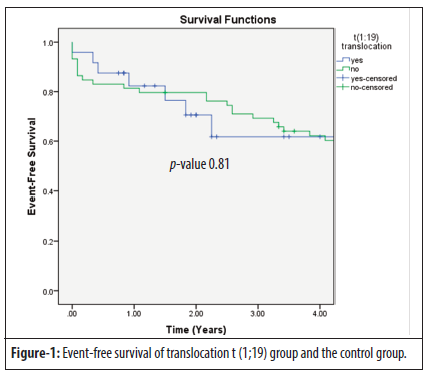 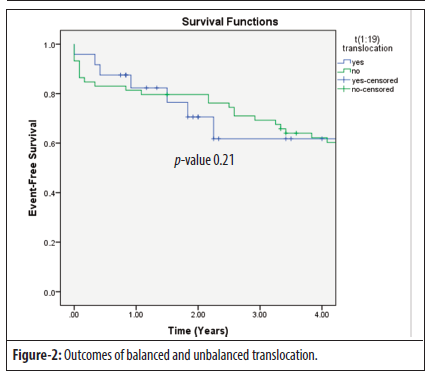 Translocation t(1;19) (q23; p13) results in the chimeric protein E2A-PBX1(TCF3-PBX1) are no longer considered a prognostic factor.6 The outcomes of t(1;19) translocation used to be controversial in the past because due to less intensive chemotherapy regimen there were increased risk of relapse, especially CNS. With the introduction of intensified chemotherapy protocol, the overall survival has improved over the years.16 However limited data is available on the Pre-B ALL cytogenetics from Pakistan and data from western world cannot be generalised.

Four patients in the current study had disease relapse; 2 had isolated CNS relapse, 1 had both ocular and CNS relapse, and 1 had medullary relapse. S. Jeha et al. also reported similar results.17 Due to low number of patients with translocation t(1;19) and inability to detect TCF3-PBX1 fusion gene, the current results would be skewed. Both forms of translocation t(1;19) (q23; p13), balanced and unbalanced, were included, and EFS with unbalanced translocation was 81.8% compared to balanced translocation (64.3%) (p=0.217), Anderson et al. reported similar results.18

The critical prognostic factor in pre-B ALL is the response to therapy.19 MRD measurement at the study site was available from 2015 onwards. Before that, treatment was stratified as per bone marrow trephine results. Overall, 17 of the 25 patients with t(1;19) in whom MRD was measured at the end of induction, the value was <10-1 which is the institutional cut-off limit, suggesting that patients treated with UKALL guidelines do not need risk stratification based on t(1;19).

The SKMCH&RC has modified treatment protocol based on UKALL 2019 guidelines, but, due to limited resources and expertise, stem cell transplant (SCT) and other salvage therapies in relapsed patients are not employed.20

There was no significant difference related to outcomes of Pre-B ALL patients having t(1;19) translocation with or without complex karyotype and those without any cytogenetic abnormality, indicating that translocation t(1;19)-positive patients do not need treatment intensification.

Limitations: Patients aged 2-5 years were included. Sample size was not calculated as study was duration dependent and all patients diagnosed with translocation t (1;19) and without any chromosomal translocation were included. This can cause a decrease in the power of the study.

Acknowledgement: The authors are grateful to the patients and their families for there support.

Conflict of Interest: All the authors state that “there is no conflict of interest to declare”.