The objective of this study was to determine the frequency and outcome of preterm infants diagnosed with Necrotising Enterocolitis (NEC). In a case series, 320 preterm infants were enrolled during a period of 12 months at Aga Khan University Hospital, Karachi, a tertiary care hospital. Diagnosis and staging was done as per Bell’s staging criteria. Possible confounders were filtered. Analysis was based on the form of treatment and symptom progression. During the study, NEC was observed in 29(9.06%) babies of which stages I, II and III were 69%, 24% and 7%, respectively. Outcome analysis showed that among the 29 neonates diagnosed with NEC, 23 were discharged and 6 expired. A 9% prevalence observed during the study suggests this to be to be a major challenge in neonatology. Mortality outcome of 21% diagnosed with NEC recommends an early diagnosis coupled with prompt and appropriate treatment and preventive measures to reduce the burden of NEC in future.

In a national estimate, the rate of preterm birth ranged from 5% to 18%. As per Unicef, an estimated 8.6 lakh premature births are recorded annually in Pakistan of which 12% die due to prematurity related complications. Of the top 10 countries in the world accounting for two-thirds of the deaths due to preterm birth complications, Pakistan ranks second.1

Before the advent of modern neonatal intensive care, NEC was not known to affect premature infants because of low rate of survival.2 To depict the earliest presentation in infants, the terms “gangrenous enterocolitis” or “malignant enteritis” were used.3 Necrotising enterocolitis is defined as an acute inflammatory disease in the intestines, particularly of preterm new-borns, and is characterised by haemorrhagic necrosis of intestinal tissue which may lead to perforation and destruction of the gut.4 The occurrence of NEC varies, with studies reporting a variation of 1%-7% of neonatal intensive care admissions with equal prevalence among male and female infants.5 A study by Yee WH et al stated the occurrence of NEC to be 5.1% among pre-term infants with a gestational age of <33 weeks.6 A study conducted at AKUH more than two decades ago, reported the overall prevalence of NEC among new-borns to be 8.7% with an overall mortality of 44%.7 The mortality rate for NEC varied between 10-30% in developed countries but can be more than 50% in developing countries.6 With an increase in survival of preterm infants, an increase in the occurrence of NEC was noted.2 Studies in Canada, Poland, the USA, and the UK report the prevalence to be 6.6%, 8.7%, 7.1%, and 14.4%, respectively in infants weighing less than 1,500 grams.8 A study done in Abbottabad reports an occurrence as high as 14.28%.9

To the best of our knowledge, only a few studies have been done in Pakistan that show the frequency of NEC in preterm neonates, so the aim of this study was to determine the occurrence of NEC in a developing country. The results of this study will provide data on the epidemiology of NEC and its outcome with information on the occurrence of the disease and a source to work on developing new practices for recognition and management so as to reduce morbidity and mortality.

The study was conducted at the Aga Khan University Hospital (AKUH), Karachi, in the neonatal intensive care unit (NICU), step down unit, and well-baby nursery over a period of one year, after the approval of the synopsis. A non-probability (consecutive) sampling method was used. By taking the study design of a descriptive case series, a sample size was calculated by taking the prevalence of NEC among preterm infants as 5.1%.6 The study was conducted over a period of one year, and data for 320 preterm infants was collected. The terminology used in the study is described in the Supplementary Appendix.

After approval from the College of Physicians and Surgeons Pakistan and the Ethical Review Committee of AKUH, all subjects fulfilling the eligibility criteria were enrolled (Figure), and followed from birth till discharge from the hospital. Confidentiality was maintained for each patient’s data. 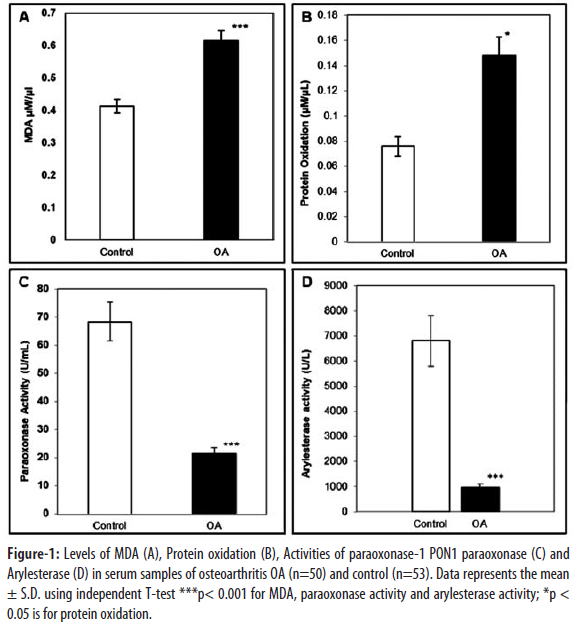 Diagnosis of NEC was made by the neonatologist on the basis of Modified Bell’s staging criteria.5 Data was collected on a pre-formed proforma and information was recorded. Staging and outcome in the form of survival, complications or mortality was recorded and analysed for patients fulfilling the diagnostic criteria of NEC.

Data was analysed using SPSS version 20.0. Descriptive statistics were done for demographics, gestational age, birth weight, gender, mode of delivery, Necrotising enterocolitis, staging, clinical features and outcome in terms of survival, complications, and mortality. Measures and outcome are defined in the supplementary appendix. Continuous variables like gestational age and weight at birth were presented as mean±standard deviation for quantitative variable. All possible confounders such as prior abdominal surgery or severe congenital abnormality were filtered at recruitment. 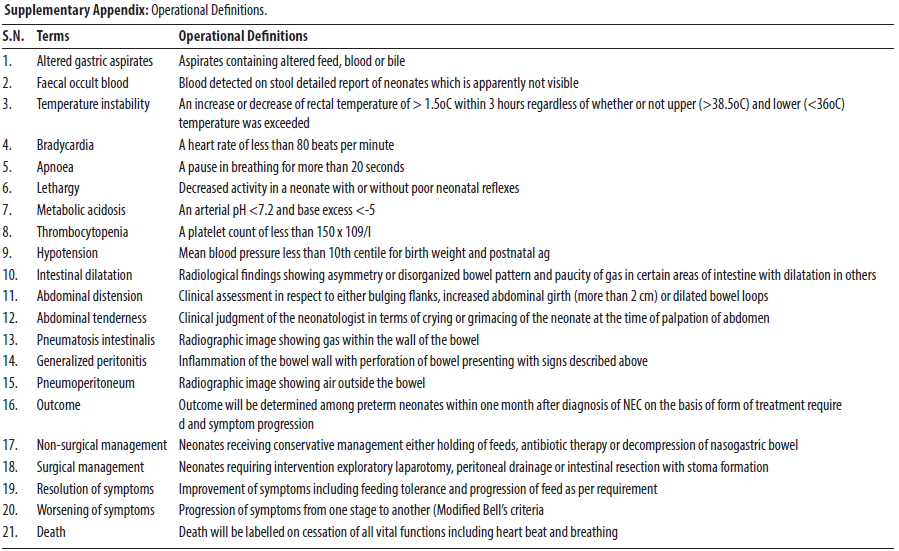 The frequency of the clinical features as per Bell’s staging is described in Table 1. Gastrointestinal symptoms were the commonest observation, with increasing gastric aspirates most commonly noted in Stage 1 NEC and mild abdominal distension in stage II and III. Pneumoperitoneum was the common radiological finding in both the cases of stage III NEC, whereas intestinal dilation was seen in stage II and normal to mild ileus in Stage I cases of NEC.

Two cases among 29 underwent surgical intervention. Of the 29 cases of necrotising enterocolitis, 23 (79.31%) improved without complications and 6 (20.69%) preterm neonates expired (1 due to surgical and 5 due to systemic complications).

Necrotising enterocolitis continues to be the cause for considerable morbidity and mortality in preterm infants. The complex aetiology and multiple factors associated with the development of disease make its prevention a significant challenge. Bell et al classified NEC according to disease severity which was later modified.10 Another classification system published uses clinical and radiological findings to define NEC.11 As compared to the previous study in this unit, the overall prevalence increased from 1.1 to 9.06%, probably due to increase in survival of infants of lower gestational age (26-34 weeks).7 In a study, the frequency in terms of staging of NEC according to Bell’s criteria was noted to be 48 %, 39 % and 13 % for stage I, II, and III, respectively with stage III having a poor prognosis.12 Similarly in our study, the occurrence of staging amongst infants diagnosed with NEC was noted to be 69%, 24%, 7% for stages I, II, and III respectively.

A stepwise approach in the management is reported depending on the disease severity, with medical management including discontinuation of oral feed, intravenous fluid therapy and decompression of the nasogastric bowel along with antibiotic therapy.8 An estimated 20-40% of infants diagnosed with NEC undergo surgical intervention with only 7% infants requiring intervention as observed in our study.13

Necrotising enterocolitis continues to hold a substantial place in neonatal illnesses. Keeping in view the increasing survival of preterm babies, multi-centre studies involving larger sample size would direct towards better understanding the associations of this disease amongst neonates born in the same region.

Disclaimer: This is a Dissertation-based article.

Effects of decompression on pain, range of motion and function in patients with acute vs chronic lumbar radiculopathy

Superscan on 18F-FDG PET-CT imaging for lymphoma: How frequent is it?