Objective: To determine the positive predictive value of Breast Imaging Reporting and Data System category IV lesions, and to evaluate interobserver agreement among radiologists in interpreting the subcategories.

Conclusion: Breast Imaging Reporting and Data System BI-RADS IV was found to have a high positive predictive value in the diagnosis of breast cancer. Besides the interobserver agreement in terms of identifying BI-RADS IV subcategories was good.

Carcinoma of the breast is the most common malignancy in women globally.1According to a recent World Health Organisation (WHO) estimate, 2.3 million women are diagnosed with breast cancer worldwide.2 In addition, 1 in every 9 women in Pakistan suffer from breast cancer, which is the uppermost incidence rate.3

It is reported that breast cancer has better prognosis if detected early.4 The imaging modalities for the evaluation of breast pathologies include conventional and digital mammography, ultrasound (US), strain and shear wave elastography, and magnetic resonance imaging (MRI).5,6

The American College of Radiology (ACR) has proposed the Breast Imaging Reporting and Data System (BI-RADS) to systematise reporting of mammograms as well as USs and MRIs.7,8 All categories raise the level of suspicion of malignancy and these categories of assessment finally confirmed by histopathology.9

The BI-RADS 5th edition, 2013, comprise mammography, US breast and MRI as well as further subcategorization of the BI-RADS category IV subtype into three further divisions; IV-A having low suspicion for malignancy, IV-B having moderate suspicion, and IV-C having high suspicion. The category IV overall is used for the evaluation of a large number of pathologies in which histopathological correlation is required to confirm the diagnosis.10

An international study portrayed that high breast biopsy rates were diagnostic overkill, drastic and valuable.11 A study found that most BI-RADS IV lesions had fibrocystic change on histopathological assessment, and the second most common was ductal carcinoma in situ (DCIS).12 However, in our clinical practice, most BI-RADS IV lesions on mammogram fall in IV-C subcategory and turn out to be malignant.

First-line imaging technique is usually mammography due to its cost-effectiveness, easy availability and high efficacy.13,14 Literature has reported a low positive predictive value (PPV) of BI-RADS IV, especially of IV-A and IV-B lesions. A local study reported high diagnostic accuracy of BI-RADS for breast cancer diagnosis with sensitivity 92.3% and specificity 88.8%.15 Although the study had a larger sample size, it did not stratify the accuracy according to each BI-RADS category which was its limitation.15 Also, it did not specify PPVs.

The current study was planned to determine the PPV of BI-RADS category IV and to evaluate interobserver agreement among radiologists in interpreting the subcategories.

The cross-sectional, multicentre study was conducted at the Ojha, Latif Ebrahim Jamal (LEJ) and Nazimabad campuses of the Dow Institute of Radiology, Dow University of Health Sciences (DUHS), Karachi, from September 2018 to February 2019. After approval from the institutional ethics review board, the sample size was calculated using EpiInfo calculator,16 taking PPV of BI-RADS IV to be 98%,17 along with confidence interval (CI) 97% and precision 2.2%.

The sample was raised using consecutive sampling technique. Those included were adult female patients aged 30-60 years having post-unilateral mastectomy/post-lumpectomy status and who were labelled as BI-RADS IV on mammography. Patients who already had biopsy-proven breast carcinoma, residual disease following surgery, chemoradiotherapy, contraindication to mammogram, including pregnant or lactating patients, contraindications to trucut biopsy, and severe psychiatric disorders, which makes them impossible to collaborate, were excluded.

After taking written informed consent from all the subjects, a detailed history was obtained and clinical examination of the lesion was carried out. A senior female technologist with >6 years of experience performed mammography on GE Performa (GE Healthcare, United States) and Mammomat 1000 (Siemens). Mediolateral oblique (MLO) and craniocaudal (CC) views were obtained. If required, additional views, such as magnification, cone compression or axillary, were undertaken for lesion localisation. Female imaging specialist with >5 years of experience evaluated all the mammograms for the presence of mass, its density, peculiar characteristics, microcalcification, their pattern, any asymmetrical density, architectural distortion, and abnormally appearing axillary lymph nodes.

Data was analysed using SPSS22. Mean ± standard deviation was computed for age, and duration of symptoms. Frequencies and percentages were computed for categorical variables, like marital status, family history of breast cancer, smoking, gravida, parity, lactation status, menstrual cycle, mammographic findings, subcategories of BI-RADS IV and final diagnosis on histopathology. PPV was calculated by dividing the number of patients truly diagnosed as positive (true positive; TP) with the total positive cases (true positive + false positive [FP]). PPV was calculated considering histopathology as the gold standard. Further stratification was done on the basis of health characteristics and suspicious microcalcification to observe the PPV of BI-RADS. Comparison was also done to see the association of malignant disease with architectural distortion and suspicious microcalcifications For which chi-square test was used. P<0.05 was taken as significant. For interobserver agreement, kappa (k) statistics were used. 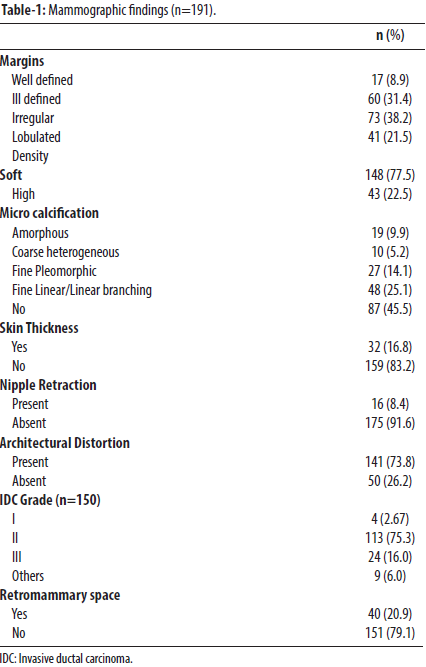 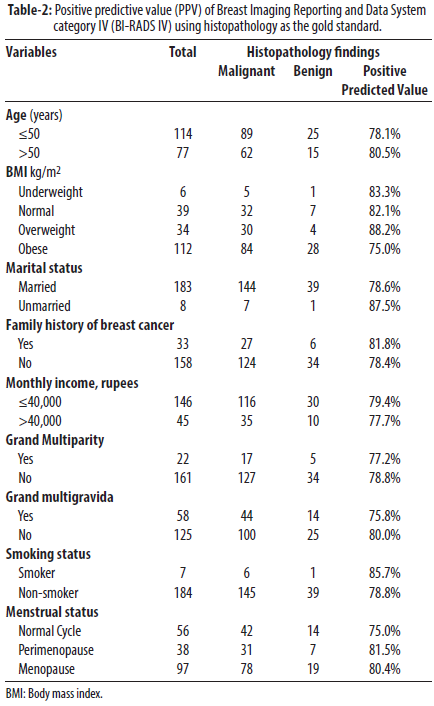 The current study showed that BI-RADS IV had a high PPV of 79% in the diagnosis of breast cancer. Various local studies have shown a high sensitivity and specificity of BI-RADS in diagnosing breast cancer,15,18 while some studies showed low PPV as well.19,20 According to a study conducted in Singapore, BI-RADS IV PPV was reported as 27.2%.20 The difference may be attributed to the fact that the two studies18,19 were old and from relatively developed Asian countries. Another reason that maybe that an older version of BI-RADS was utilised in the previous studies,19,20 whereas the current study utilised the updated BI-RADS version, 2013. According to another local study, the PPV of BI-RADS IV was 98%17 compared to 79% found by the current study.

The current study showed BI-RADS IV PPV 78% in patients aged ≤50 years and 80.5% in patients aged >50 years. Conversely, the recent trend has shown an increased incidence of breast cancer among women aged <45 years.2 A study reported that an advanced stage breast cancer diagnosis in Pakistani women was at least a decade earlier than in the West.21 Though screening mammography is recommended at age 40, we get referrals by physicians and surgeons for women aged 30 years and above with palpable mass and strong family history. As such, those patients were also included in the current study. Also, recent literature has reported an increased incidence of breast cancer in young patients.2

The current study included unilateral mastectomy as well as patients with post-lumpectomy with breast conservation surgery. Moreover, the findings showed that BI-RADS IV PPV in underweight population was 83.3%, in normal weight 87.1%, in overweight 94.4% and in obese 91.30%. Increasing BMI increases the risk of breast cancer.22,23 This factor might have attributed to high PPV.

Most of the patients in our study had IDC grade II. A local study conducted on 150 patients also demonstrated that grade II was common compared to grades I or III.24 Similar results have been reported in various international studies as well.25 However, another local study has reported the frequency of IDC grade III to be the highest.26 Therefore, further studies with large sample size are needed to validate the histopathological patterns of breast cancer in Pakistan.

The current study has certain limitations Firstly, the sample size was small. Secondly, it had a cross-sectional design in which the temporal relationship between different risk factors and outcome was not determined. Furthermore, the data regarding use of hormone replacement therapy (HRT) among postmenopausal women was not collected as the use of HRT can have effect on breast cancer risk.

Despite these limitations, however, the findings are based on data collected from one of the largest public-sector academic medical centres in which different modalities, such as X-ray, US, MRI or computed tomography (CT) scans were available under one roof. Moreover, the data was collected prospective, and the study was multicentric. Lastly, interobserver agreement was also calculated.

In the light of the findings, it is recommended that further multicentric studies based upon larger sample sizes shall be carried out. Moreover, studies by incorporating variables that were not collected in the current study, such as the status of oestrogen receptors and progesterone receptors positivity, use of HRT, cultural and ethnic status. Furthermore, studies evaluating temporal relationship between risk factors and outcome shall also be carried out.

BI-RADS IV was found to have a high PPV in the diagnosis of breast cancer. Further stratification on the basis of subcategories showed PPV of IV-C to be the highest, followed by IV-B and IV-A. As far as suspicious microcalcification is concerned, amorphous and fine linear/linear branching had better PPV. Most importantly, interobserver agreement in identifying BI-RADS IV subcategories was found to be good.

Disclaimer: The text is based on an academic thesis.