Objective: To determine the frequency of short-term complications in late preterm neonates in a tertiary care setting.

to May 31, 2021, and comprised late preterm neonates. Frequency of complications were noted in the subjects. Data was

day of life at presentation was 2±1.9. Most common maternal risk factor was premature rupture of membrane 48(24%).

The World Health Organisation (WHO) estimated the worldwide preterm birth rate to be about 11% of total births. South-eastern Asia, South Asia, and sub-Saharan Africa report the maximum preterm births in the developing world,1 while 73% of them are late preterm births.2 In Pakistan, the prevalence of prematurity is approximately 18.89%.2 Preterm birth is a public health, social and economic problem, and is considered the most frequent cause of neonatal death globally.3

Although late preterm constitutes the main percentage of preterm births in secondary and tertiary care hospitals, they were usually not considered liable for preterm complications since they are very similar physiologically and metabolically to the term neonates and are kept in Level 1 nurseries around the world.2

Neonatologists and paediatricians should be fully cognizant of the current and ongoing complications infants can suffer after being born late preterm.

The current study was planned to determine the frequency of short-term complications of late preterm neonates in a tertiary care setting.

The descriptive, observational study was conducted at the Paediatric Department of Benazir Bhutto Hospital, Rawalpindi, Pakistan, from December 1, 2020, to May 31, 2021. After taking approval from the institutional ethics review committee.

The sample size was calculated using the WHO calculator11 with estimated population 12.7%,2 precision level 5% and confidence interval (CI) 95%.

The sample was raised using non-probability consecutive sampling technique from among the patients presenting to the hospital’s nursery through emergency or received directly from the gynaecology department. Those included were neonates of gestational age from 34 weeks to <36 weeks admitted to the neonatal intensive care unit (NICU).

Those excluded were neonates having congenital anomalies, those with inborn error of metabolism, and patients who did not have first trimester ultrasound available for gestational age calculation.

Data was collected after taking informed written consent from the parents or caretakers. Patient profile, including name, age, gender, address, hospital number, date of inclusion in the study and any complication developed in the first seven days, was noted using a predesigned proforma.  All investigations done at the hospital pathology department, the diagnosis of late preterm and any complication seen was classified as per operational definition. Late preterm neonate was defined as gestational age between 34 weeks and 36+6 weeks,2 calculated on the basis of 1st trimester ultrasound; short-term complications were complications noted within 7 days of life; hypothermia was body temperature <35.5 degrees Celsius; respiratory distress syndrome (RDS) was neonates having abnormal respiratory rate, nasal flaring, lower chest indrawing, or chest X-ray (CXR) showing signs of RDS;10 necrotising enterocolitis was having clinical signs and symptoms of abdominal distension, not tolerating feed, disseminated intra-vascular coagulopathy (DIC) and/or ultrasonographic findings; sepsis was clinically diagnosed and confirmed or supported by laboratory evidence; hyperbilirubinaemia was bilirubin >3mg/dl;12 hypoglycaemia was blood random sugar level <55mg/dl after first 4 hours of life.13

Data was analysed using SPSS22. Qualitative data was expressed as frequencies and percentages, while quantitative variables were presented as mean and standard deviation. The relation of complications with gestational age and birth weight was evaluated using chi-square test. P<0.05 was taken as statistically significant. 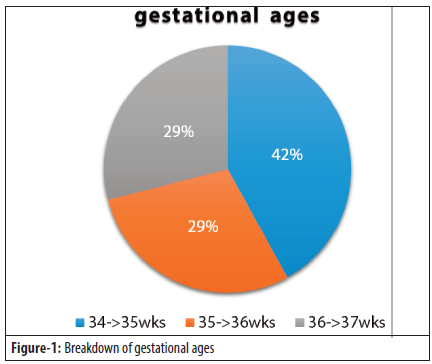 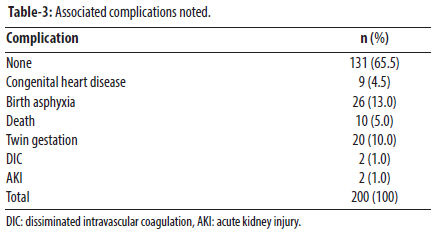 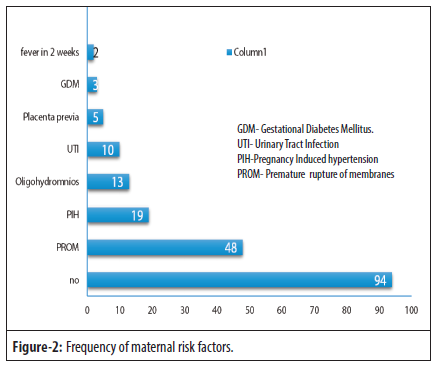 Statistics on late preterm neonates in the developing countries are usually deduced from the available data elsewhere owing to lack of accurate local data.1

Late preterm neonates are at greater risk of preterm complications. They are more prone to develop hypoglycaemia, hypothermia, RDS, transient tachypnoea of the newborn, apnoea of prematurity, exaggerated physiological jaundice, NEC and feeding difficulties after the birth.14-17

The current study assessed and monitored late preterm neonates from birth hospitalisation up to 7 days to record the rate of short-term complications, and results manifested the frequency of RDS 29%. Khowaja et al. stated that respiratory morbidities were diagnosed in 23.5%2 subjects and that the risk decreased with gestational age. Shaikh et al. reported RDS in 35% of late preterm neonates.18 In the current study, there was significant relationship of RDS with gestational age (p=0.02) and birth weight (p=0.03).

Another complication noted in the current study (5%) was hypothermia, which had no significant relation with gestational age (p=0.08) and birth weight (p=0.04). Other studies reported 10% and 6%2 cases of hypothermia that needed active management.

Late preterm neonates are more likely to develop hyperbilirubinaemia, its delayed resolution and central nervous system (CNS) complications because of the imbalance of bilirubin production and excretion due to hepatic immaturity.19,20 In the current study, 19% subjects developed NNJ, which is comparable to 17.5%1 and 14%15 such subjects requiring phototherapy.

Increased need of glucose for brain as well as decreased ability of gluconeogenesis can lead to hypoglycaemia in preterm neonates, and poor feeding ability adds to the risk.21 In the current study, 2% subjects developed hypoglycaemia. Studies reported hypoglycaemia in 16%,19 13.8%1 and 3%6 of late preterm neonates. The low frequency in the current study was because all the subjects were being managed with intravenous (IV) dextrose in the initial hours of life.

Intestinal microbial environment affects the immunological maturity in late preterm neonates and delay in intestinal colonisation process make these newborns more prone to infection. In the current study, 44% subjects developed sepsis compared to 2%,19 9.2%2 and 0.7%6 reported earlier. The difference can be due to overcrowding of neonates and relative absence of aseptic techniques due to lack of manpower and training in the current study’s site.

Late preterm neonates can experience poor growth due to their inability to breastfeed adequately because of weak suction pressure or inadequate milk supply because of delayed lactogenesis. Late preterm infants may take “considerably longer to feed normally” because gastrointestinal motility and gastric emptying may be delayed.22 In the current study, feeding problems were noted in 9% subjects and NEC in 2%.

In the current study, the main maternal complication that led to late preterm birth was PROM in 24%. in one study, 29% of spontaneous late preterm deliveries had PROM.22

The limitations of the current study include a short 6-month duration, and its focus on a limited number of complications. Long-term complications were not noted.

Late-preterm neonates are at higher risk of neonatal morbidity, especially in the first 7 days of life when there fragile body is adapting to extrauterine life. They need to be taken care of and monitored in this crucial phase of life. Health authorities should formulate policies that may help avoid late preterm morbidities.