Nicotine dependence and intention to quit among electronic, conventional and dual cigarette users in Karachi

Objective: To compare nicotine dependence and intention to quit among different types of smokers.

Methods: The comparative cross-sectional study was conducted from November 2018 to October 2019 in Karachi after approval from the ethics review committee of the Jinnah Sindh Medical University, and comprised conventional, electronic and dual cigarette users. Data was collected using a structured questionnaire regarding socio-demographics, usage characteristics, and intention to quit. The validated Hooked on Nicotine Checklist was also used. Data was analysed using SPSS 22.

Smoking is hazardous to health, and reducing tobacco use is a major public health concern.1 It has been estimated that tobacco alone is responsible for the death of more than 8 million people annually. Of the 1.1 billion smokers worldwide, 80% belong to low- and middle-income countries (LMICs).2 Globally, the use of electronic cigarette, or e-cigarette, is gaining popularity as a modern alternative despite mixed evidence on its potential as an aid for smoking cessation.3

Dependence on nicotine strongly contributes to high death rate of tobacco-associated diseases.4 There is a belief that e-cigarettes are beneficial in the sense that the current users may switch from combustible smoke producing cigarettes to e-cigarettes as a harm-reduction substitute.5 On the other hand, e-cigarette users have also reported symptoms of nicotine dependence.6,7

In Pakistan, e-cigarette is freely being marketed and promoted on social media as less harmful, and new brands are emerging at a fast pace. Since the government imposed a ban on water-pipe smoking, the dynamics of smoking has shifted from water-pipe smoking to e-cigarettes. The current study was planned to compare nicotine dependence and intention to quit between e-cigarette, conventional cigarette and dual users, and to identify factors associated with each of them.

The comparative cross-sectional study was conducted from November 2018 to October 2019 in Karachi. After approval from the ethics review committee of the Jinnah Sindh Medical University (JSMU), Karachi, the sample size was calculated using OpenEpi calculator.8 Keeping 95% confidence level, 80% power and 21.6% nicotine dependence in conventional cigarette smokers and increased dependence of odds ratio (OR) of 2.5 among dual cigarette users.9 The required sample size was inflated by 10% to cover for non-response rate.

After taking informed consent from all the participants, data was collected using a structured four-section questionnaire. The first section related to socio-demographic variables. The second section related to patterns of tobacco and cigarette use, duration and total nicotine intake measured in mg/day. The third part was about nicotine dependence which was measured using the Hooked on Nicotine Checklist (HONC) and it was classified as low and high based on median split (0-5 versus 6-10).10 The fourth section assessed the intention to quit smoking.11,12

Data was analyzed using SPSS 22, and reported as percentages and frequencies or mean and standard deviation. Chi square and Kruskal-Wallis tests were applied to compare the characteristics of the three groups for categorical and continuous variables, respectively. Binary logistic regression was also used to determine relationships between different factors and high nicotine dependence and intention to quit smoking. Odds ratios (Ors) with 95% confidence intervals (CIs) were calculated. P<0.05 was considered statistically significant. 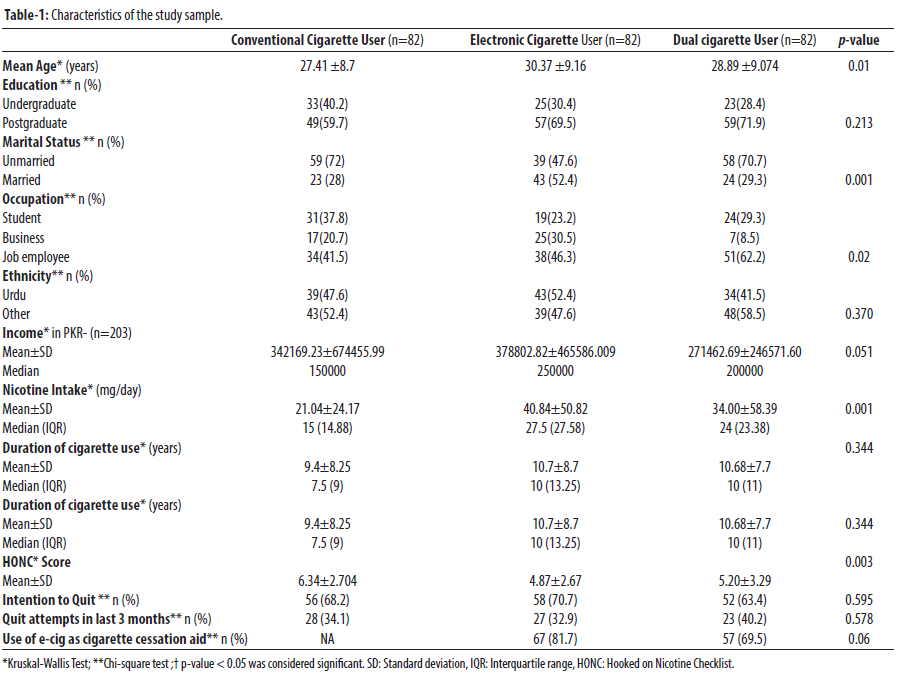 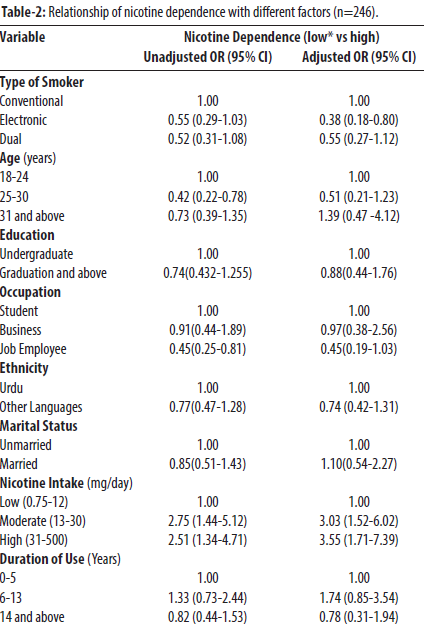 After adjustment for all confounders, no significant difference was observed in intention to quit among different types of cigarette users (p>0.05) (Table 3). 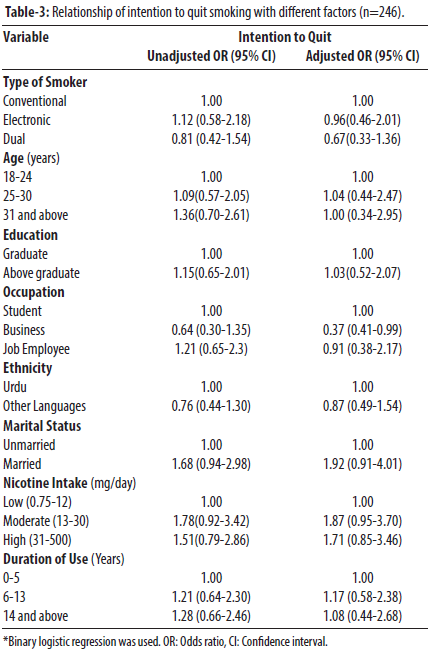 The current results showed less dependence among e-cigarette users whose nicotine intake was found to be the highest. There was a positive relationship of nicotine dependence with greater nicotine intake. This shows that the amount of nicotine intake may not be the only factor responsible for dependence, and nicotine delivery to the bloodstream is also important in determining dependence. Nicotine from tobacco smoke is rapidly absorbed into the systemic circulation after cigarette use and is quickly carried to various body organs, including the brain. Moreover, a single use of tobacco nicotine remains in the body for 8-12 hours. Whereas, e-cigarettes deliver nicotine at a much lower rate. A study reported e-cigarettes (18mg/ml) deliver only one-third to one-fourth the amount of nicotine after 5 minutes of use compared to conventional cigarettes.16 The other possible reason for less dependence may be that e-cigarettes are used more frequently throughout the day, resulting in continued exposure and less experience of symptoms of withdrawal.

According to a study, the common reasons for quitting e-cigarette use were either the users were just experimenting, using e-cigarette did not actually feel like cigarette, or people did not like the taste of e-cigarette.21

Finally, in comparison to students, businessmen were less intended to quit, which may be because of other reasons, like increased mental stress and workload. A study has also shown association between higher stress scores and increased odds of conventional cigarette smoking, e-cigarette use and water-pipe use.22

The current study has some limitations. First, e-cigarettes are advanced devices equipped with high-tech features, and some people were using certain devices which could control power output, and increasing the power output may result in increase in nicotine yield, which has not been captured in the study. Second, a cross-sectional study design provides evidence at a certain point in time, and a longitudinal study would have been able to better understand the different stages of e-cigarette use and nicotine dependence. Third, this study has only captured male representation because of female less e-cigarette use and low responses rate.

In the light of the findings, the current study proposes that e-cigarette should not be recommended to anyone who has never smoked before as its nicotine intake is quite high and can lead to dependence. The use of e-cigarette may be encouraged as smoking cessation aid, but regular follow-up and vigilance should be kept and nicotine intake shall be gradually tapered off. In Pakistan, there is no specific policy targeting e-cigarettes regulation. The policy-makers should introduce strict fines against people promoting e-cigarette among non-smokers.

Disclaimer: The text is based on an academic thesis.

1.       National Center for Chronic Disease Prevention and Health Promotion (US) Office on Smoking and Health. The Health Consequences of Smoking—50 Years of Progress: A Report of the Surgeon General. Atlanta, GA: Centers for Disease Control and Prevention (US); 2014.