Superscan on 18F-FDG PET-CT imaging for lymphoma: How frequent is it?

This retrospective study was conducted to evaluate the frequency of PET superscan in baseline staging scans of lymphoma patients.The study was conducted at the Shaukat Khanum Memorial Cancer Hospital, Lahore, from October 1, 2018 to August 31, 2019. A retrospective review of baseline PET-CT scans of 203 lymphoma patients, performed during the period of October 1, 2017 to  August31,2018, was done from the institutional database. Out of these 203 patients, PET superscan pattern was observed in 13 (6.4%) patients, 08 (61.5%) males and 05 (38.5%) females. Eight (61.5%) patients had Non-Hodgkin’s lymphoma, while 05 (38.5%)had Hodgkin’s lymphoma. Based on TNM staging 10 (76.9%) patients had stage IV disease, 01 (07.6%) had stage III disease, and 2 (15.4%) had stage II disease. PET-CT superscan pattern is uncommon and is not dependent on the stage of the disease. It should be recognised in clinical practice as it suggests a poor prognosis.

The term superscan has been conventionally used to describe a characteristic pattern seen on skeletal scintigraphy in which there is an increased radiotracer uptake within the bones with near-complete/complete absence of renal and soft-tissue uptake.1 However, the superscan pattern seen on FDG PET scans is one in which there is reduced or lack of radiotracer uptake in an organ which normally shows significant physiological uptake, such as brain, myocardium or kidneys. It is a rare pattern and is not well recognised.2 The purpose of this study was to document the frequency of this uncommon pattern in the baseline lymphoma patients which may help to understand the significance of PET superscan pattern, effects of therapy in patients who have superscan pattern and their survival rate.

This retrospective study was performed after the approval from the institutional ethical review board. Review of 203 lymphoma patients,whose PET-CT scans were performed during October 1, 2017 to August 31 2018, was done from the institutional database by two radiology fellows, one consultant radiologist and two consultant nuclear physicians to evaluate the frequency of superscan pattern in lymphoma patients. Only baseline PET-CT scans of lymphoma patients were included, irrespective of age and gender. Restaging lymphoma scans and other non-lymphoma PET-CT scans were excluded from the study. All the patients were imaged from head to thigh after an adequate time of injecting 18F-FDG on a dedicated 16 slice Philips Gemini TF PET-CT scanner. The quantity of 18F-FDG injected in the patient was according to WHO guidelines, depending on the weight of the patient. Blood glucose levels of all the patients were also cross-checked to exclude any patients with increased blood glucose levels at the time of scanning (i-e. blood glucose level >150 mg/dl). The scan was labelled as PET Superscan in which there is significantly higher FDG uptake in the diseased organs with faint/absent uptake in the brain and myocardium, which normally show high FDG uptake due to high physiologic glucose metabolism. For this purpose, a volumetric region of interest (VOI) was placed over the lymphoma lesion for the calculation of SUV (max) on PET images after establishing correlation with CT images and PET-CT fusion images to obtain the best possible real match of the lesion. Similarly, VOI was placed in the brain parenchyma after establishing correlation with CT images and PET-CT fusion images. Furthermore, visual analysis was performed to evaluate the FDG activity in the brain and myocardium compared to that of the diseased tissue. Statistical analysis was performed using SPSS 20. Associations were obtained using the Pearson Chi-Square correlation. A p≤ 0.05 was considered significant. The disease-free intervals were calculated with the Kaplan–Meier method. Comparisons between groups were made using the log-rank test. 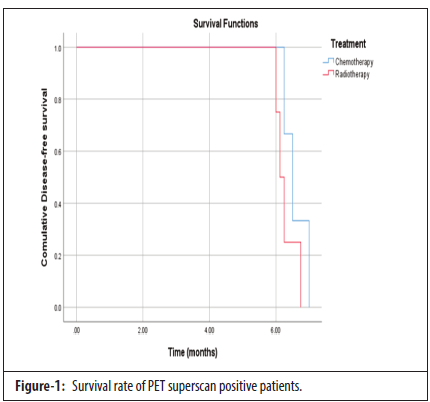 Superscan is a well-known term in skeletal scintigraphy which implies significantly increased skeletal tracer uptake on 99mTC MDP bone scan with diminished or absent uptake in kidneys and soft tissue.1 A similar term is also used in

18F-FDG PET imaging in which there is significantly higher FDG uptake at the disease site with decreased or faint uptake in the brain, myocardium, kidneys, and soft

tissues.4-6 The differential diagnoses of PET superscan varies not only from benign to malignant conditions but also includes some normal physiological conditions like strenuous exercise or injecting insulin before PET scan, increased baseline sugar levels, and hyperventilation.7,8 PET superscan is described in the literature with various names like hepatic superscan in which there is increased hepatic uptake with relatively lower uptake in brain, kidneys, and myocardium;9 metabolic superscan in which there is increased uptake in the bones secondary to metabolic causes like hyperparathyroidism with decreased brain and renal activity;10 and as muscle scan which denotes increased muscular tracer uptake secondary to hyperglycaemia and strenuous exercise.2 Hanaoka et al describe an inverse relationship of disease burden and normal physiological activity in the brain in lymphoma patients due to diversion and accumulation of FDG in lymphoma involved tissues from normal brain parenchyma.11 The same is also true for the other causes of PET superscan where increased disease uptake sequesters a higher amount of FDG in tissues which demonstrate normal physiologically increased FDG uptake like brain and myocardium by steal phenomena. The frequency of PET superscan pattern in baseline patients was evaluated due to intense FDG uptake by lymphomatous tissues and the tendency of lymphoma to present as bulky nodal masses or disseminated metastatic lesions representing huge tumour burden.12,13 It wasobserved that the quantity of FDG sequestration from brain and myocardium also depends on the histological type of lymphoma and not only the bulk of the disease, as some of the high-grade lymphomas are very avid on PET scan (Figure 2). There were several limitations in our study which need to be considered. Firstly, the design of the study was retrospective and secondly, the number of positive superscan patients was limited. Furthermore, a significant number of PET superscan positive patients (04 out of 13) were lost to follow-up. 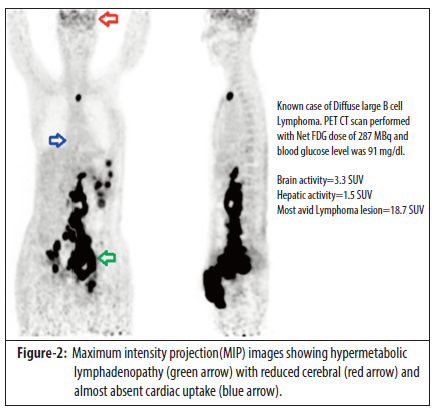 PET superscan can be seen in a variety of conditions that extend not only to benign and malignant conditions but sometimes can also be seen in normal physiological conditions. However, it is quite important to understand that the pattern specifically denoted the shift of FDG from organs which show physiologically increased FDG uptake to those organs or tissues which usually are either non PET responsive or less avid. Furthermore, PET superscan denotes a huge tumour burden; however, the choice between chemotherapy and radiotherapy does not have any significant impact in these cases. Therefore, the treatment regimen given in these cases should be as per appropriate treatment guidelines.

Effects of decompression on pain, range of motion and function in patients with acute vs chronic lumbar radiculopathy