Objective: To determine the frequency of culture positive and culture negative endocarditis and type of organisms causing bacterial endocarditis in patients admitted at National Institute of Cardiovascular Diseases (NICVD), Karachi.
Methods: This was a cross sectional, descriptive study conducted from 29th March 2006 to13th October 2006 at National Institute of Cardiovascular Diseases, Karachi. All patients having clinical suspicion of infective endocarditis were admitted and worked up. Seventy five patients having definite infective endocarditis as per Duke Criteria were included.
Results: There were 55 (70%) males and 20 (30%) females. Mean age of the patients was 23 ± 8.9 years. Ninety percent of the patients were below 40 years of age. Six patients had prosthetic valve and six were intravenous drug abusers. The commonest signs and symptoms observed were fever, shortness of breath, weight loss, murmur, pallor and splenomegaly. Mitral valve was affected in majority of patients. Blood cultures were positive in 40 (53.3%) cases while 35 (46.7%) cases were culture negative. Nine (22.5%) patients out of 40 culture positive cases and 29(82.8%) patients out of 35 culture negative cases were using antibiotics before admission. All six intravenous drug abusers showed culture positive endocarditis. Among culture positive cases, staphylococcus group was found in 21 (52.5%) cases while streptococcus group in 11 (27.5%) cases. Coagulase negative staphylococci were found to be the most common organism, that is 14/40 (35%) patients.
Conclusion: Changes in spectrum of organisms causing bacterial endocarditis reported by western researchers do exist in our community. To know the reason behind these changing trends needs further advanced studies and evaluation (JPMA 60:24; 2010).

Infective endocarditis is a microbial infection of the endothelial surface of the heart. Despite advances in medical, surgical and critical care interventions, it remains a disease that is associated with considerable morbidity and mortality.1
Positive blood culture is a major diagnostic criterion for infective endocarditis. Failure to culture the organism in infective endocarditis may result from inadequate anti microbial technique, infection with highly fastidious bacteria or non bacterial organism or most importantly, from the administration of antimicrobial agent before blood cultures are obtained. Common species causing infective endocarditis include streptococci, staphylococci, enterococci and fastidious gram negative coccobacilli. Other rare causes are mycobacteria, rickettsia, chlamydia and fungi.2 In recent series staphylococci particularly staphylococcus aureus have surpassed streptococcus viridans as the most common cause of infective endocarditis.3-5
Identification of the pathogen in culture-negative disease depends on special procedures, which comprise inactivating antibiotics in the culture media, prolonging incubation, serology, agglutination, indirect fluorescence, ELISA, complement fixation, and PCR amplification of the 16S ribosomal RNA gene.6
While the world literature is abundant in research papers highlighting various aspects of infective endocarditis only a few studies have been published locally.7,8 Recent studies have shown that the spectrum of organisms causing bacterial endocarditis is changing in the western society.3,4 There was a need to collect the data from our community and compare it with the western counterpart to see whether the same organism prevailed in both communities and in the same frequency or not. This will give us a broader vision in starting the empirical therapy while cultures are awaited.

This was a cross sectional, descriptive type study. A total of 75 patients were enrolled. All patients of age more than 12 years and were provisionally diagnosed as endocarditis on clinical basis fulfilling Duke Criteria,2 were included. Patients who proved to have malaria, urinary tract infection or any source of infection other than bacterial endocarditis were excluded from the study. Patients in whom blood cultures for bacteria turned negative and later on showed fungal growth were also excluded. Patients with clinical suspicion of infective endocarditis who could not be categorized as definite infective endocarditis were also excluded from the study.
After written informed consent detailed history was taken and a thorough physical examination was carried out. All patients admitted for unexplained fever associated with heart murmur, splenomegaly or haematuria, as well as patients with special risk factors like underlying heart disease, intravenous drug abuse, valve prosthesis, and unexplained stroke with fever were worked up for infective endocarditis. Transthoracic and/or transesophageal echocardiography was arranged. Full blood count with ESR, urine examination, ECG, chest x-ray, blood urea, serum creatinine and C reactive protein were done in all patients. CT scan brain and abdominal sonography were carried out where necessary.
Three sets (aerobe and anaerobe medium) of blood culture were taken from three different sites of the body (right cubital fossa, left cubital fossa and left wrist) at intervals over 24 hours. All three sets of culture were sent to the same lab to minimize any error. Microbiologist was informed about the provisional diagnosis.2 Blood cultures were processed by using Automated Bactec 9240.
Out of 124 patients screened, 75 were included in the study, who fulfilled the Duke criteria of clinical diagnosis of infective endocarditis. i.e. Two major criteria or one major and three minor criteria or Five minor criteria. All enrolled patients were examined by two independent physicians to confirm the validity of clinical findings.
Data was analyzed on SPSS Version 10.0. 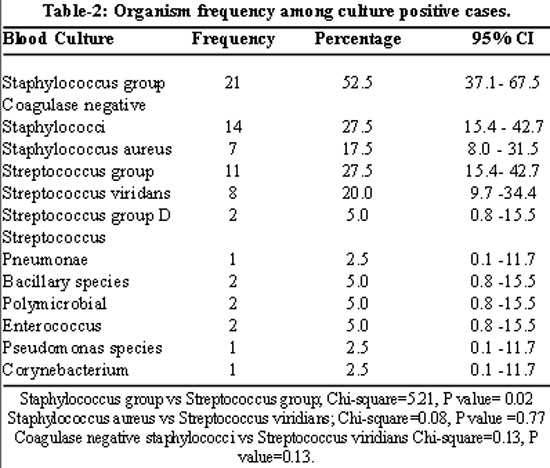 Infective endocarditis is an evolving disease of our community. Interesting trends have been observed in this study. Male predominance is one aspect and has been reported elsewhere by researchers like Chen CH9 and Mckay.10 Majority of the studies are western. In our society the reason behind male predominance seems to be related to socioeconomic bias as reported by Rehman S7 in his study.
Most of the patients belonged to the younger age group, with almost 90% falling below 40 years. Majority of the researchers from developing countries report a similar age group affected, including Rehman S,7 Tariq M,8 from Pakistan and Agarwal11 from India. However, in developed countries relatively older population is affected as reported by Bashore TM,12 and Krcmary V.13 The reason to support this finding is based on the fact that chronic rheumatic heart disease is not only the most common underlying condition in developing countries but is also prevalent in younger age group predisposing them to infective endocarditis. On the other hand, increased longevity in developed countries due to better health care system has not only given rise to predisposing factors like degenerative valvular disease, placement of prosthetic valves, and increased exposure to nosocomial bacteraemia, but also the median age of the patients has increased from 30-40 years during pre-antibiotic era to 47-69 years more recently.2,9
The pattern of symptoms, signs and laboratory features in our studied population was comparable to other reported studies.7,14 As previously stated by Tariq M,8 Jalal S,15 and also in this study, mitral valve was predominantly involved in the process of colonization. The reason behind is the same, because mitral valve is most commonly involved in rheumatic heart disease. One fourth of the total patients had congenital heart disease. This group could be larger but most of these cases were excluded because of age less than 12 years.
In this study 46.7% of patients were found to be culture negative. This finding is consistent with other studies from developing countries.7,8,11 However, Krcmary13 and Omezzine-Letaief16 from developed countries have also reported similar percentages of culture negative cases. While comparing with other studies, like Chen CH9 reports 5.2% and Zamorano J14 18.7%, this percentage is quite high. This low culture positivity/high culture negativity is understandable as most patients in our country like other underdeveloped countries receive unjustified antibiotics prior to admission in hospital, while consulting area doctors or quacks. Similarly in this study, significant association was found between previous intake of antibiotics and culture negative endocarditis.
Moreover, in this study, there were 6 intravenous drug abusers. All patients showed culture positive results which might be due to highly virulent organisms, higher degree of septicaemia and low immunity in this group, as also shown by Abdali H.17
Interestingly, Staphylococcus group has significantly superceded the streptococcus group and other organisms among culture positive cases. This finding contradicts the previous belief which was also supported by studies by Agarwal R,11 and Wazir MDK,18 conducted few decades ago in which streptococcus group was the leading cause of IE. But other studies conducted in the past few years by Prendergast,4 Cheng A5 and Chu J,19 confirm that staphylococcus group is the leading cause of IE. The reason for this change may be, changing patient characteristics, social trends, interventions, urbanization and so on. To identify the exact reason needs more advanced studies and evaluations.
The high yield of coagulase negative staphylococci is surprising. Usually isolation of these organisms creates suspicion of skin contamination. But isolation of this group in the presence of fever, valvular/congenital heart disease, splenomegaly, vegetations, abscesses and especially prosthetic valves cannot be ignored. In this study, high yield might be due to the fact that both prosthetic valve and native valve endocarditis cases were included. Lalani T20 has described coagulase negative staphylococci as the leading cause of PVE. Moreover, many studies including Chu VH21 and Yousuf SW22 have shown increasing frequency of this group in NVE.
Besides CoNS, the high incidence of Staphylococcus aureus and Streptococcus viridans is not surprising as same is already reported by Cheng A,5 KrcmaryV,13 Chu J,19 and many other researchers. However, absence of a significant difference between percentages of these organisms indicates a rising trend of Staphylococcus aureus. These results suggest that the changes in the spectrum of organisms causing bacterial endocarditis reported by western researchers do exist in our community.
Besides many other factors, the isolation of corynebacterium and Streptococcus pneumoniae is surprising. Usually these organisms are known to cause respiratory tract infections but many recent studies including those by Kakis A23 and Lefort A24 have greatly emphasized their role in causing bacterial endocarditis.

Infective endocarditis is still a disease of younger age group in our community.Changes in spectrum of organisms causing bacterial endocarditis reported by western researchers also exist in our community. To know the reason behind these changing trends further advanced studies and evaluation is necessary.