Beliefs and perceptions of acne among a sample of students from Sindh Medical College, Karachi

Objective: To determine the beliefs of undergraduate medical students regarding acne.
Method: A cross-sectional study in 630 medical students (aged 16-29 years) was conducted. A voluntary self administered questionnaire was used to collect data regarding their beliefs and perceptions about acne. Both acne and non-acne sufferers were included in the study.
Result: Of the 630 respondents, 55.9% were sufferers while 44.1% were non-sufferers. Of all, 67.0% of the affected believed it to be relieved by frequent face washing and that they should seek treatment, whereas 79.84% students believed in seeking dermatologist's advice regarding treatment. Mass media was the most common source of information. As to the cause, 21.7% students believed that hereditary factors and 20.1% thought environmental factors are the major cause of acne. In diet, soft drinks (29.2%) were considered the major exacerbating factor. The most significant emotional impact of acne on medical students was embarrassment (26.2%).
Conclusion: The results of this study pointed out that misconceptions and false beliefs on acne are widespread and enduring among Medical students' too. Health education programme on acne is needed to improve their understanding of the condition (JPMA 60:51; 2010).

Acne is a skin condition that occurs due to the overproduction of oil by the oil glands of the skin. The oil that normally lubricates the skin gets trapped in blocked oil ducts and results in what we know as pimples, blackheads, and whiteheads on the surface of skin. Sometimes it also includes deeper skin lesions that are called cysts.1 Various studies on acne prevalence in adolescents show a frequency ranging from 30% to 100%, and have reported up to 91% of male and 79% of female teenagers being affected by acne.2 In Pakistan acne accounts for about one-fifth of all visits to dermatologists and is common in individuals aged 13-35 years. Despite the tendency for acne to be treated as a minor ailment, patients with this condition require attention.3
Acne is a treatable disease, but the treatment usually lasts for many years and it may influence many aspects of patient's life. Information on the knowledge and understanding of acne among undergraduate medical students has only occasionally been reported in the medical literature. In this context, a study was conducted among the students of Sindh Medical College to judge their awareness about acne and the beliefs pertinent among undergraduate students.

A survey of the adolescent and young adult population (aged 16-29) of Sindh Medical College was conducted from 1st March to 30th April 2007, by means of a self-reported questionnaire. The selection of the college was made to ensure satisfactory representation of different demographic groups as students from different areas of the city are enrolled in this college.
Before the distribution of the questionnaire a verbal consent was obtained. The students completed the questionnaire during teaching time, each person being allotted 25 minutes to complete the form. Simple random sample was used. The questionnaire contained questions regarding the knowledge about acne, the factors responsible for this disease along with its symptoms and different modes of treatment plus the emotional difficulties being faced by the acne sufferer at the time of this disease. Instructions were given before the distribution of the questionnaire directing pupils with acne to complete all the questions, while pupils stating not to suffer from acne were directed to omit questions regarding the personal management used during acne and the emotional impact of acne. The answers were used to assess the participants' level of acne awareness being a medical student. The identification of the student was not disclosed, only the data collected from the questionnaire was used. A subsample of 60 students from the same college was evaluated initially to validate the questionnaire and clinical characteristics of acne lesions. 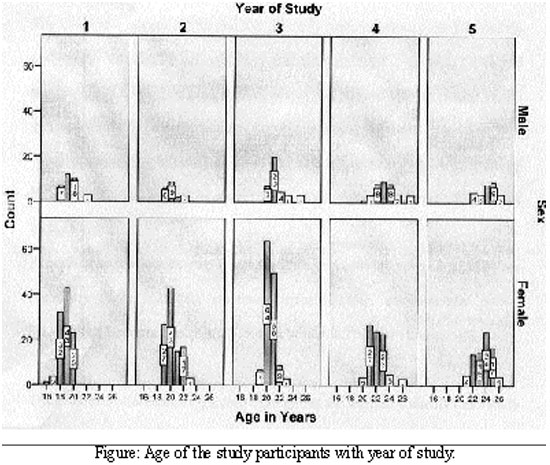 The reported exacerbating factors of acne by year-wise distribution are shown in Table-2. 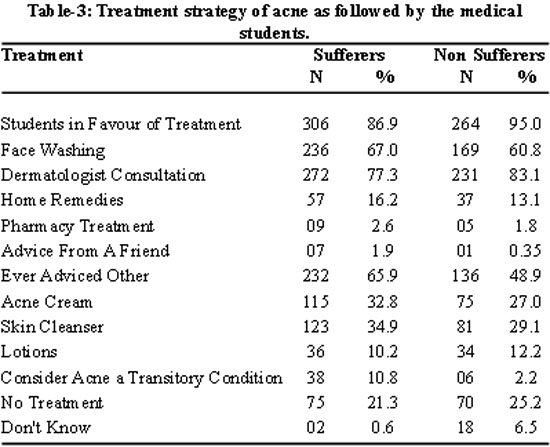 Acne is a very common condition. This study supports the already known fact that acne is a common problem for Pakistani adults. Of the 630 students 55.9% reported that they had acne. The prevalence of acne in females was slightly higher than that in males. Regarding the beliefs about acne, this study showed that hormones were accurately identified by the majority of the students as a causal factor of acne followed by infection but familial disease was not clearly identified as was found in a study in UK where 81% of variance of the disease was attributable to genetic factors and only 19% to environmental factors. Another British case-control study found a significantly greater risk of adult acne in relatives of patients than in relatives of controls.4
Almost 80% of the students' preferred medical advice from a dermatologist as opposed to the study conducted in UK where less than a third of participants with definite acne had sought medical advice.5 This could indicate increasing medical student awareness that acne is a treatable medical condition. Regarding the non prescription products used skin cleanser was highly advocated followed by acne creams, but it was disheartening to know that some students still considered using no treatment for acne. Nijsten et al6 have also confirmed the low treatment utilization in acne. The results of this study showed that unfortunately, a significant number of medical students felt that frequent face washing did relieve acne which may be due to the misconception that washing face frequently will keep the skin clear and free of oil and dirt. However, Kimball et al7 suggested in his paper that washing the face more often does not significantly improve acne. In fact dermatologists often warn that over washing and excessive scrubbing can irritate and exacerbate the condition by aggravating the sebaceous glands.
Some investigators have found that acne exacerbates in winter, whereas the condition often improves during the summer months.8 However, the findings of this study were completely opposite as almost 50% of the students believed hot/sunny weather to be the main culprit, this may be due to hot and humid climate of Karachi.
It seems that the appearance of the skin affects the patient's overall body image9 as the result of this study also shows that the significant psychological impact of acne is low self image. Acne results in embarrassment, depression, frustration, anger and social withdrawal. The results were similar to those of a study from Nigeria.10
In this study mass media was found to be the most frequently used source to gain knowledge about acne followed by friends, family physician and medical books. However in other studies, the most frequently reported sources of information about acne were TV, followed by parents, friends and magazines.11 These result reflected that the important role of Medical education is missing and there is lack of dermatological knowledge among the undergraduates. This lack of knowledge directly affects the rights of patients since these graduates will be the future doctors. Stress should be laid on planning of medical curriculum in such a way that adequate time should be spent in dermatological wards. Improving physicians' and patients' knowledge of acne and its treatment may help to reduce health related impairment and patient dissatisfaction and, thus, increase treatment adherence and reduce burden on tertiary care hospitals.
Although most students believed stress to be a major factor but strong evidence is lacking for a casual association of stress with acne. Most of the students believe sleep not to be interfering with acne. It is a cause for concern that despite the prevailing view that no association exists between acne and diet almost all the students believed diet to be an etiological factor in acne. Most students opted for spicy food and chocolate while only a few picked junk food and soft drinks. This shows that misconceptions and misinformation is still highly prevalent among the student population despite the high availability of information.

While in the past 50 years progress has been made in dermatological practice with regard to acne vulgaris, it is however distressing to realize how little this disease has changed despite the existence of potent treatment. This survey reveals that acne is still a common occurrence and medical students have little knowledge about its treatment. Further studies are required to highlight this situation and steps should to be taken to impart more dermatological knowledge among the medical students.