Objectives: To determine Under Five Mortality Rate (U5MR) in Gambat and to identify causes of and factors associated with it.
Methods: The study was conducted in taluka Gambat of Sindh, Pakistan from December 2002 to August 2003. The sample of at least 510 mothers was needed to capture expected 1020 live births. We interviewed mothers to elicit information about live births in the past five years, under-five mortality and its cause. Additionally, the mothers were also asked about their mobility and availability of husband's support in child's rearing, other than economic support.
Approval was sought from Aga Khan University's Ethical Committee. Pre structured questionnaire was used. Data were double entered, validated and cleaned using Epi-Info 6 and analysed with Statistical Package for Social Sciences (SPSS) version 11.5.
Results: We included 647 mothers, who reported 997 births in the past five years. The reported number of deaths was 169, with the estimated U5MR of 170/1000 live births/year. The five major causes of mortality were tetanus (17.8%), diarrhoea (11.8%), measles (6.5%), delivery related morbidities (6.5%) and Acute Respiratory Infections (4.5%). Fever was identified as a cause by 19.1% mothers. About 20% did not know the cause of death.
The regression analysis showed father's literacy level (AOR 1.8, 95% CI 1.1-2.8) and father's support in child rearing (AOR 5.6, 95% CI 3.6-8.6) as factors significantly associated with mortality.
Conclusion: Increasing education among parents in rural areas like Gambat is important to reduce child mortality. Father's involvement in child rearing can play a role (JPMA 60:81; 2010).

According to the United Nations Children's Fund (UNICEF), 11 million children of age less than five years die every year from preventable diseases. Most deaths are reported from Sub-Saharan Africa and South Asia.1 In Pakistan, under five mortality rate (U5MR) is 100 per 1000 live births and Infant Mortality Rate (IMR) is 80 per 1000 live births.2
Child mortality has grave social and developmental implications. It is inversely related to economic development,3,4 which could be corroborated by the fact that seven out of ten children die in the developing countries.5
The factors reported to be associated with child mortality in developing countries include parental education, area of residence — rural/urban, number of siblings and gender of the child.6-9 The other important factors are lack of immunization10 and poor hygienic conditions.11
There is paucity of data on causes and factors associated with child mortality. Therefore, the current study, will determine U5MR and causes and factors associated with under five mortality in Gambat, Khairpur, Sindh.

The current study was conducted as part of the main study that focused on the key community practices proposed in Integrated Management of Childhood Illnesses (IMCI) protocol.12 This was a community based survey, conducted from December 2002 to August 2003 in Gambat, a taluka of district Khairpur, an agrarian district of province Sindh of Pakistan.13
To calculate the required sample size, U5MR of 107 per 1000 live births was taken into account as it was the reported rate in the country at the time of study.14 To capture the aforementioned proportion with bound of error of 3%, design effect of 2.5 and level of confidence of 95%, a sample of at least 1020 live births was required.
The current study intended to capture the live birth and U5MR that occurred during the past five years. It was assumed that on an average a rural woman of age 15-45 years would have had two live births in the past five years; therefore a sample of at least 510 women was required to capture 1020 live births.
Before initiating the field work, we sought and obtained approval from the Ethical Review Committee (ERC) of the Aga Khan University (AKU). Gambat is comprised of nine "Union Councils (UCs)": Gambat I, Gambat II, Kamaldero, Jado, Belharo, Khemtia, Khora, Ripri, and Razidero. To recruit required sample, sub samples proportionate to the population size of each UC were determined.
Three stage cluster sampling was utilized to recruit required number of mothers from each UC. In first stage, a village was randomly selected from each UC; however where the sample size was greater than the size of the village, two adjacent villages were selected. The important landmarks such as shops, schools and mosques were identified in the selected village and a landmark in each of the village was randomly selected as a focal point for the survey. In second stage, a soda bottle was rotated and the first household with a pair of the mother and her child of age less than five was selected. In case of more than one mother-child pair, a pair was randomly chosen. The house nearest to the sampled house with a child-mother pair was visited next and the process was repeated until the required number of houses for that village was enrolled.
A prestructured questionnaire was used to interview mothers. The mothers were asked about the number of live births and mortality of children aged less than five and its cause. In addition, mothers were also asked about if they could visit the health facility alone in case of sickness and if the husband provided support, other than the economic support, in child's rearing.
Double data entry was performed and validated using EPI-Info 6 to check for completeness and consistency. Statistical analysis was done by the Statistical Package for Social Sciences (SPSS-11.5). Frequencies and means were calculated for the categorical and continuous data respectively. Univariate analysis was conducted to determine independent factors associated with child's mortality. Finally, logistic regression analysis was utilized to determine factors that remained significant after controlling the effect of other factors in the model.

presents the descriptive analysis of data on socio-demographic and women support and mobility factors. Table-2

presents number of deaths reported by cause. The five major killers reported were tetanus, diarrhoea, measles, delivery related morbidities and Acute Respiratory Infections (ARI). Fever was identified as a cause by about 18% mothers and about 20% did not know the underlying cause of death. 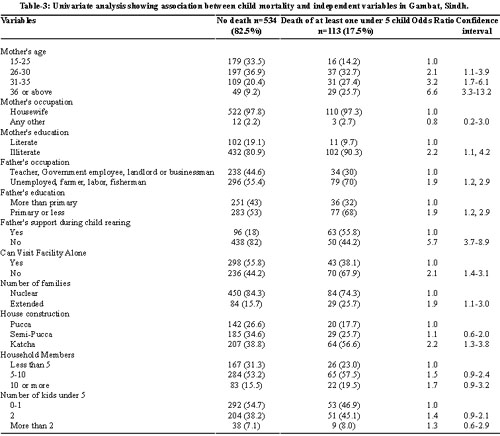 presents independent association of factors with mortality as outcome. All variables showed significant association except mother's occupation, number of household members and number of under five children that mother had.

The multiple logistic regression analysis revealed that two variables, father's literacy level [More than grade 5 vs 5 or less; AOR 1.8, 95% CI 1.1-2.8] and father's support during child rearing [Yes vs No; AOR 5.6, 95% CI 3.6-8.6] showed significant association with under five mortality (U5M) as outcome. However, mother's literacy did not show significant association in the final model.

The focus of the study was to determine the under five mortality among 647 mothers and their risk factors including the father's support in child rearing. The U5MR was 170/1000 live births. Two factors showed significant association with the U5MR, father's literacy level and father's support in child rearing.
The U5MR was found to be higher than the rate prevalent in the country at the time of study. The reason being, Gambat is an impoverished taluka of a poor agrarian district of rural Sindh.13 Moreover, primary health care facilities are also meager in the taluka.13
The study revealed that about 38 percent mothers did not know the specific cause of death of their children. They were either unaware or suggested fever as cause of death. This seems surprising as death of a child is a drastic event in a mother's life. Not knowing the exact cause alludes towards mothers' lack of knowledge and not having control over conditions around her. Studies have shown that in paternalistic societies such as Pakistan women often feel disempowered in many areas of their lives.15
Tetanus was the leading cause of mortality. The highly prevalent culture of application of cow dung on umbilical stump and walking and playing barefoot on fields are perhaps the major underlying reasons for that.11 The number two, three and four causes of mortality were diarrhoea, measles and delivery related morbidities, respectively. These are the most cited causes of mortality among under five children in developing countries.16
The reported rate of mortality due to pneumonia and malaria was lower than expected in our study.17 The two diseases could not be included among the leading causes of death. This is because of the fact that mothers lacked knowledge regarding ARI and pneumonia in Gambat.12 Malaria, on the other hand, is a disease that is difficult to diagnose, therefore death due to it could easily be classified as death due to fever.
Our analysis showed that 21 (18.6%) mothers reported death of more than one under five children: 12 reported two deaths, three reported three deaths and six reported four deaths. The diseases that caused more than one death in the same household were tetanus, diarrhoea and chickenpox. The delivery related morbidities were also among such causes. This shows phenomenon of clustering of diseases and deaths in the houses.
We found that the households where mothers reported father's involvement in child rearing were less likely to encounter under five child's death than those where such involvement was not reported.18 The father's involvement was reported by mother. Therefore we consider this as a proxy indicator for harmony between the couple. The harmony between couple is a key to household's prosperity and health in any society and specifically in a paternalistic society like Pakistan, where decisions are mainly taken by male counterparts of the families.19,20
The results revealed that father's literacy was associated with Under 5 mortality. Literature suggests that an educated husband can play a better role both as husband and parent.18 Educated husband can take better decisions and seek timely and appropriate treatment for their children.21 Contrary to the past studies, we did not find an association between mother's literacy and the under five mortality.22 The reason for mother's literacy being insignificant is that majority of the mothers (90.3%) were illiterate in Gambat. Given the homogeneity of the factor and lack of power of study thereby, this key variable was found insignificant.
The major limitation of our study was that we utilized mother's report and not verbal autopsy to classify cause of mortality. This must have misclassified few causes. We think that this was the reason for not having pneumonia and malaria among top causes or child's mortality in our study. However, our results were consistent with the literature for other causes of death. This shows that mother's reporting could be used as a quick and useful tool for ascertaining disease specific mortality for specific diseases even in a rural area like Gambat with high illiteracy rates among women. A study should be done to see the validity of mother's reporting as a screening tool against verbal autopsy used as a gold standard for classification of causes of mortality especially in areas with high illiteracy.
The findings showed that U5MR is still very high in rural settings of Sindh. Our study clearly demonstrated that though mothers are the first level care providers but father's education and support in child rearing has its own importance. The study highlights the much forgotten role of father in child's rearing.

The authors thank the mothers for giving their precious time to the study. We are also indebted to the support provided by the Patients Welfare Society, Gambat for their assistance during fieldwork and to the Post Graduate Medical Education Committee of the Aga Khan University for funding the study.
Contributions by the Authors:
Dr Agha Ajmal: Led the study and wrote the first draft
Dr Fozia Ajmal: Took active part in reviewing drafts and providing critical inputs
Mr Iqbal Azam reviewed the statistical part of the manuscript
Dr Franklin White supervised Dr Agha Ajmal in development of the study

Has the anterolateral thigh flap replaced the latissimus dorsi flap as the workhorse for lower limb reconstructions?