Objective: To assess the serum lipid profile of cardiovascular disease free male and female children with b-thalassaemia. Levels of zinc, copper and magnesium in the serum were also determined along with the Thyroid profile.
Methods: From January to December 2007, we enrolled 121 consecutive patients with b-thalassaemia that visited The Thalassaemia Center at Dhaka Shishu (Children) Hospital, Bangladesh every month for routine examinations. Fasting blood lipid levels were measured in all participants. Zinc, Copper and Magnesium levels in serums were determined. Thyroid function was also assessed by evaluating T3, T4 and TSH levels.
Results: Of the 121 patients, 65 were males (10.14 ± 3.91 years) and 56 were females (9.08 ± 4.32 years). Data analysis revealed that 2.0% males and 4.35% females had high total serum cholesterol, and 28.57% males and 21.74% females had high triglyceride levels. In addition, mean HDL-cholesterol levels were 21.14 ± 5.82 mg/dl in males and 21.17 ± 6.02 mg/dl in females; total-cholesterol to HDL-cholesterol ratios were 5.47 ± 1.66 and 5.96 ± 2.81 in males and females respectively. About 60% patients showed low serum level of Zn and Cu. Hypothyroidism was detected in 30% patients and 23% patients had abnormal experimental values of all the study parameters.
Conclusions: The majority of the patients had blood lipid levels (by the exception of HDL-cholesterol) within the normal range, and consequently the prevalence of lipid abnormalities was much lower as compared to the general population of the same age. Interestingly, the total-cholesterol to HDL-cholesterol ratio was high in our patients, and may underline the importance of this index for the prognosis of future cardiac events in these patients. The serum Zn and Cu levels were low in most of the patients which may cause some metabolic abnormalities in future. Most of the patients also showed hypothyroidism indicating the presence of endocrine complications (JPMA 60:360; 2010).

Beta-thalassaemia is a very serious blood disorder since individuals with it are unable to make enough healthy red blood cells and depend on blood transfusion throughout their life. However, quality and duration of life of transfusion-dependent thalassaemic patients has been transformed over the last few years, with their life expectancy increasing well into the third decade and beyond with a good quality of life. Nevertheless, cardiac symptoms and premature death from cardiac causes are still major problems since in the absence of effective iron chelation therapy; many patients develop evidence of iron-induced myocardial damage with cardiac failure, cardiac arrhythmia, sudden death, or a distressing lingering death from progressive congestive cardiac failure.1-4 During the past years many scientific evidences have raised the adverse effect of abnormal blood lipid levels, like total-cholesterol and other lipids and lipoproteins on atherosclerotic disease.5-7 At this point it should be mentioned that the relationships between blood lipids and atherosclerosis might be influenced by several other lifestyle-related factors, like glucose intolerance; blood pressure levels, dietary and smoking habits.8
In recent years, several authors reported a high incidence of endocrine abnormalities in children, adolescents and young adults suffering from thalassaemia. However, the incidence of endocrinopathies varies among different series of the patients. This is multifactorial besides iron overload.25 Trace metals deficiencies in patients with thalassaemia have been under debate. Trace minerals have shown to influence growth and hormones e.g. zinc deficiency is considered a causative factor in osteoporosis and endocrinopathies.
To the best of our knowledge, data regarding the distribution of blood lipid levels among patients with beta-thalassaemia are lacking. Therefore, we investigated the distribution of triglycerides, total-, LDL-, HDL-cholesterol in serum samples of patients with beta-thalassaemia in Bangladesh.

From January to December 2007, 121 consecutive patients with b-thalassaemia who visited The Thalassaemia Center at Dhaka Shishu (Children) Hospital, Bangladesh every month for routine examinations were enrolled. Moreover, the selected sample can be considered as representative since there were only minor, insignificant, differences in sex and age distribution between the study population and the target population regarding the sex-age distribution. Patients belonged to various regions from all over Bangladesh and interviewed by trained personnel (for some patients; especially for infants their parents were interviewed but the others were interviewed directly) who used a standard questionnaire. This questionnaire also had the option of their consent to analyze their serum sample. Participants had haematological evidence of beta-thalassaemia, i.e. profound hypochromic anaemia; mean erythrocyte volume less than 75 fl, electrophoretic haemoglobin A2 higher than 3.5% of total haemoglobin and both parents had beta-thalassaemia. Moreover, presence of the disease was also evaluated by genetic analysis, which confirmed the absence or the reduced levels of alpha- or beta-chain synthesis in haemoglobin. Patients received red blood cell transfusions regularly, every 2 to 3 weeks, to maintain haemoglobin level 10 to 13 g/dl. All patients were under iron chelation therapy with deferoxamine, in a dose of 30 to 50 mg/kg given five to six times weekly subcutaneously. Chelation treatment was monitored by frequent estimation of ferritin levels in serum and urine. All patients were without any evidence of heart failure at the time of entry, as assessed according to the New York Heart Association (NYHA) classification classes I to IV,4 as well as by the recent guidelines of the European Society of Cardiology.9 In addition, we did not include patients with other cardiovascular or systemic diseases, including rheumatic valve disease, chronic bronchitis and cirrhosis.
Blood samples were collected from the antecubital vein between 8 to 10 a.m. in a sitting position after 12 hours of fasting and avoiding of alcohol. The biochemical evaluation was carried out in the laboratory that followed the criteria of the World Health Organization Lipid Reference Laboratories. All biochemical examinations (triglycerides, LDL-cholesterol, total-cholesterol, and HDL-cholesterol) were measured using chromatographic enzymatic method in a semiautomatic analyzer RA-50. Serum level of Zn, Cu and Mg were determined using the kits and procedures of ProDia International UAE. And final data was read using clinical chemistry analyzer RA-50 of Bayer Diagnostics, Ireland. Thyroid function was assessed by measuring serum level of T3, T4 and TSH using commercial quantitative ELISA kits and procedures of ProDia International UAE by using ELISA reader 990 Win 6BV4 of GDV-Italy. Age of the patients was considered for determining the normal range of all the study parameters.
Continuous variables were analyzed as mean values ± standard deviation. 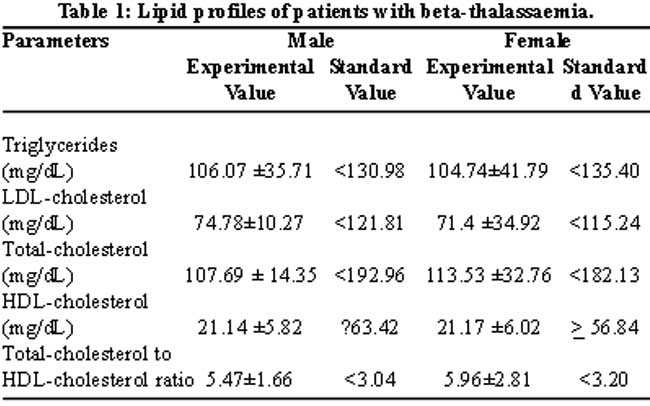 Data analysis revealed that 2.0% of males and 4.35% of females had high total serum cholesterol, and 28.57% of males and 21.74% of females had high triglyceride levels. In addition, mean HDL-cholesterol levels were 21.14 ± 5.82 mg/dl in males and 21.17 ± 6.02 mg/dl in females, total-cholesterol to HDL-cholesterol ratios were 5.47 ± 1.66 and 5.96 ± 2.81 in males and females respectively.
Estimation of serum metal ions is an important parameter to assess the clinical condition of patients. Serum Zn, Cu, and Mg level were assessed. All of these metals are important metabolic regulatory factors in different ways. The average value of each parameter is presented in Table-2 of either sex. Data indicates that serum Zn and Cu levels were lower than the lower limit of standard value range but the Mg serum level was within the range (Table-2).

Hypothyroidism is associated with the abnormal production of thyroid hormone. Thus the assessment of serum T3, T4 and TSH could provide the important information about the function of thyroid gland and the correlation with other disease(s). They were assessed and the results are shown in Table-3.

Hypothyroidism was present in 28.57% of the male patients and 66.65% of the female patients. Patients showing abnormal serum level and suffering with hypothyroidism are summarized in Figure. 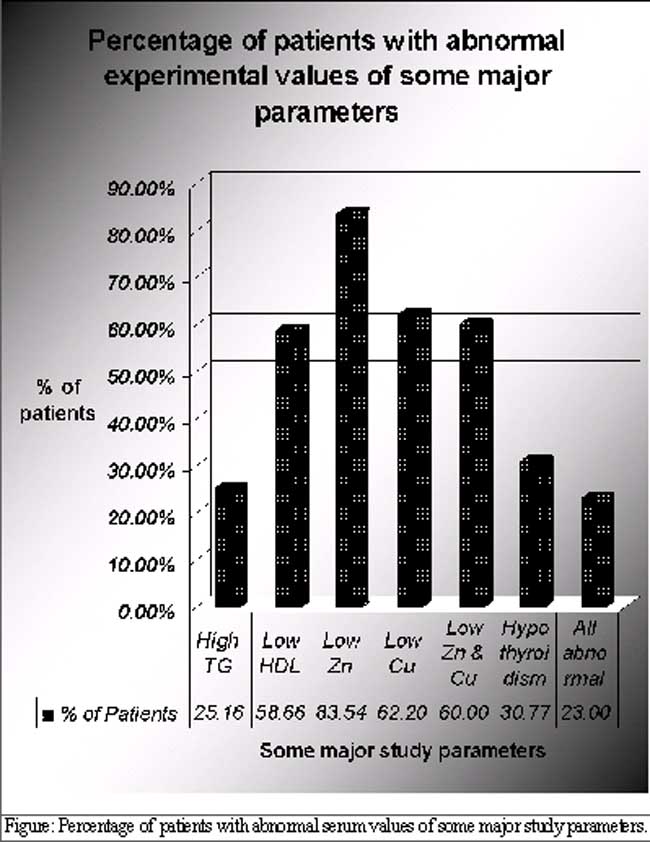 The present study revealed that the majority of males and females with beta-thalassaemia have their blood lipid levels within the normal range, and lower than the healthy individuals of the same age and population. An exception is that the very low HDL-cholesterol levels, which may underline the importance of total-cholesterol to HDL-cholesterol ratio as a prognostic factor for future cardiac events in this high-risk population. The deficiency of zinc, copper might lead some metabolic abnormalities. The prevalence of some endocrine complications among our thalassaemic patients signifies the importance of our observations where we found abnormal levels of thyroid hormones. Thus, we prefer to conclude that the abnormalities found in the total-cholesterol to HDL-cholesterol ratio, thyroid hormone level and metal ions level in this study might be the underlying cause of the variety of complications that the thalassaemic patients develop.

We thank the Department of Biochemistry and Molecular Biology, Dhaka University for funding this project and the Thalassaemia Center, Dhaka Shishu (Children) Hospital, Bangladesh for providing the sample for this study.

Self inflicted burn; a high tide

Knowledge, attitude and practices regarding Chronic kidney disease and estimated GFR in a tertiary care hospital in Pakistan