Paraplegia in a patient on warfarin treatment

A case of a large spinal epidural haematoma, in a 58 years old male, leading to paraplegia, in a patient on long-term warfarin treatment is presented. Magnetic Resonance imaging (MRI) of the whole spine showed extensive epidural spinal haematoma distal to C4 level surrounding and displacing the spinal cord and the nerve roots up to T2 level. Near complete neurological recovery followed surgical evacuation and multidisciplinary rehabilitation.

Spontaneous epidural haematoma is a well-known condition. Jackson first described it in 1869.1 Piotrowski et al reviewed the medical literature in 1979 and found reports of 124 cases. Out of these, 24 cases were associated with anticoagulant therapy.2
Presentation could be either acute or chronic. Neurological deficit may evolve within hours, days or weeks. In any case surgical evacuation of the haematoma may help to reduce the neurological deficit.3 Patients on anti-coagulants treatment are found to be more prone to develop spinal epidural haematoma.4 Urgent MRI (Magnetic Resonance Imaging) scan is sufficient to confirm the diagnosis. Recovery of neurological deficit is variable and depends upon the initial damage to the spinal cord.
A case of large spontaneous spinal epidural haematoma following warfarin therapy is presented. This case is a reminder of this important differential diagnosis in which prompt diagnosis, definitive treatment and multidisciplinary rehabilitation may prevent long-term neurological complications.

A 54-years old male patient reported to the hospital with progressively worsening cervical and thoracic spinal pain of 24 hours duration and new onset of paraplegia. There was no history of any trauma or injury. His past medical history included myocardial infarction, coronary artery bypass graft surgery, stroke and prosthetic mitral valve replacement. He reported residual left sided weakness secondary to stroke. He was on long-term warfarin for his prosthetic valve replacement.
Clinical examination in the Accident and Emergency department revealed localised tenderness over cervical and upper thoracic vertebral column. Motor examination of the lower extremities showed muscle power of 0/5 on MRC (Medical Research Council) grade in all muscle groups bilaterally. There were absent soft touch and pinprick sensations below T8 (Thoracic vertebrae 8) dermatome level with intact sensation in the sacral segments S4 and S5. Deep tendon reflexes were absent at the knees and ankles bilaterally.
He was immediately transferred to the neurosurgical unit where a diagnosis of incomplete paraplegia with a sensory level of T8 and sacral sparing was confirmed. This corresponds to type B on the American Spinal Injury Association (ASIA) Impairment Scale.
Laboratory investigations revealed normal full blood counts, normal inflammatory markers, and an INR (International Normalized Ratio) of 10. Urgent MRI scan of the whole spine showed degenerative changes in mid and lower cervical spine and lower lumbar spine. There was diffuse abnormality of the spinal canal with an extensive spinal epidural haematoma from C5 to T2 levels that was displacing the spinal cord (Figure). 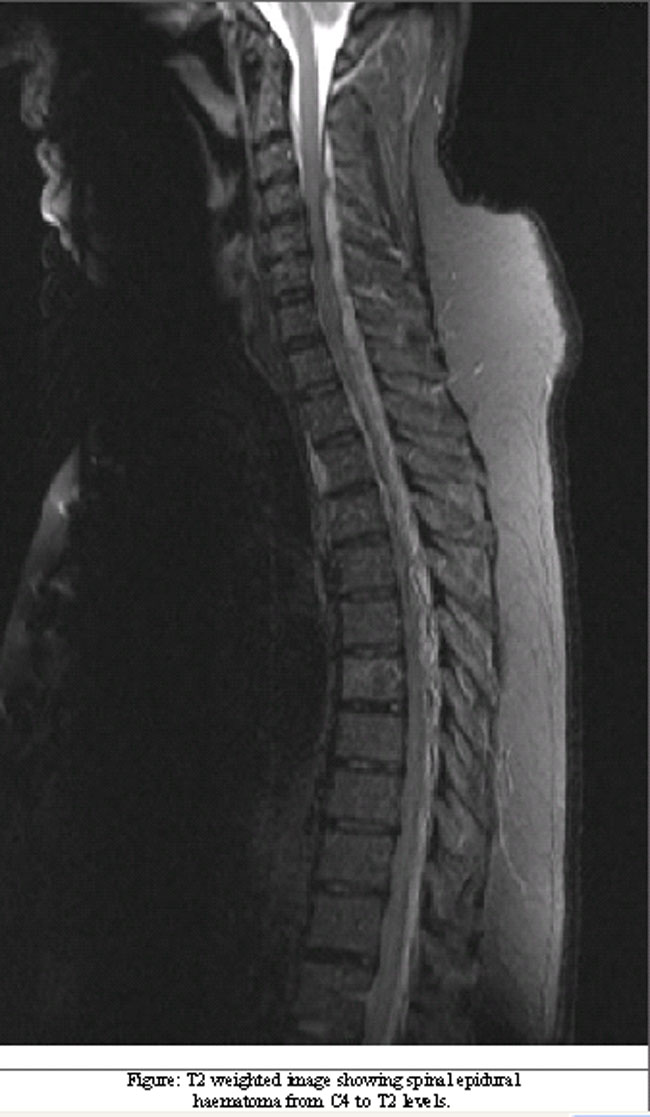 Warfarin was reversed using 1 mg of intravenous Vitamin K and four units of fresh frozen plasma. Cervical-thoracic laminectomy from C5 to T2 was performed through posterior approach and the epidural haematoma was evacuated as an emergency.
Post-operatively the patient made smooth recovery. Immediate movements of his toes were noticed in the recovery room. On arrival to the rehabilitation unit on the 7th postoperative day he required hoisting for all his transfers and was unable to stand up or walk. He had absent sensations in his lower limbs, was incontinent of faeces and was catheterised. He required assistance for all his activities of daily living (ADLs).
During his rehabilitation the power and sensation began to recover in his lower limbs. Right lower limb power returned to 5/5 on MRC grade and left lower limb power to 4/5. He became independently mobile with one stick over 200 meters indoors and outdoors. His transfers improved and he was independent with his ADLs. Community occupational therapist installed a commode and grab-rails in his flat. He was also provided with a self-propelling wheelchair for longer distances. He failed multiple trials without urinary catheter and was taught to carry out intermittent self-catheterisation. During his six weeks of stay in the rehabilitation unit, his Functional Independence Measure (FIM) score improved significantly from 89/126 on admission to 112/126 on discharge.

Spinal epidural haematoma is an important differential diagnosis for warfarinised patients who present with axial spinal pain along with focal or evolving neurological symptoms. The anticoagulants should be withheld immediately and coagulation abnormalities corrected. MRI is the gold standard in confirming the diagnosis and marking the location and extent of haematoma. Emergency spinal cord decompression, haematoma evacuation, and multidisciplinary rehabilitation may improve the functional outcome.