Posterior Reversible Encephalopathy Syndrome (PRES) refers to a clinicoradiologic entity with characteristic features on neuro-imaging and non-specific symptoms comprising headache, confusion, visual disturbances and seizures. The lesions in PRES are thought to be due to vasogenic oedema, predominantly in the posterior cerebral hemispheres, and are reversible with appropriate management. We report 3 cases of acute PRES who had eclampsia and presented with recurrent episodes of seizures and hypertension. Their MRI scan showed diffuse abnormal signal intensities involving predominantly deep white matter of the occipital lobes. Based on the findings the most probable diagnosis of PRES was suggested. They were started on antihypertensive drugs. On follow-up examination after 5-7 weeks, the patients showed marked improvement clinically and on neuro-imaging following which they were discharged in stable condition.

Case-1:
A 33-year-old female, known hypertensive was admitted at 24th week of pregnancy with severe uncontrolled hypertension, unconsciousness and seizures. Pregnancy was terminated due to life threatening medical condition of mother. She had spontaneous vaginal delivery of a dead baby boy. This lady was on ventilator and monitored in the ICU.
Her MRI Brain showed diffuse abnormal signal intensities involving predominantly the deep white matter, cortical region in the frontoparietal location, bilateral basal ganglia, centrum semiovale and periventricular location predominantly along the trigones of the lateral ventricles, and subcortical white matter in the occipital region. All these changes showed iso to hypointense signal on T1-weighted, hyperintense on T2-weighted and FLAIR images (Figure-1[a,b,c]). 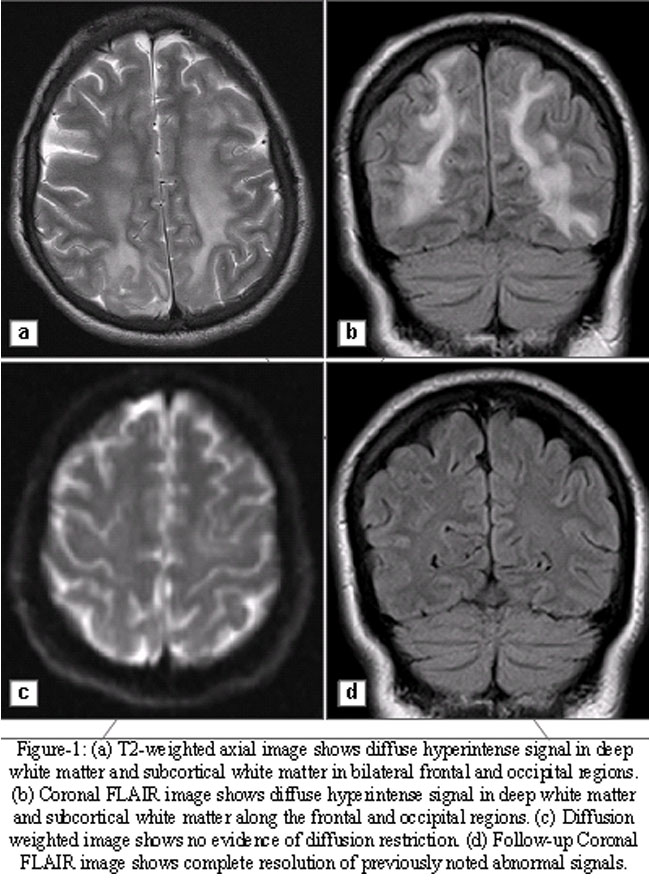 After, administration of gadolinium contrast, there was no abnormal enhancement in these areas. Keeping the clinical correlation in mind, history of eclampsia, pregnancy and hypertension, the appearance was due to posterior reversible encephalopathy syndrome.
On follow-up Magnetic Resonance Imaging (MRI), there were subtle hyperintense abnormal signals on T2-weighted and FLAIR sequences involving left centrum semiovale in central gyrus region, left superior parietal gyrus and left inferior occipital gyrus region (Figure-1[d]). After, administration of gadolinium contrast, there was no enhancement in meninges and brain parenchyma. This represented vasogenic oedema. Magnetic Resonance (MR) Venogram after contrast injection showed no evidence of venous sinus thrombosis. The patient was much better clinically and her hypertension was fully controlled on oral antihypertensives. This was proven on 2nd MRI imaging done after 5 weeks.
Case-2:
A 19 year female, primigravida with history of eclampsia in 35th week of pregnancy, had high blood pressure readings occasionally. She developed three episodes of generalized tonic clonic seizures prior to emergency C- section. Post C-section she again developed seizures, her blood pressure was 150/100 and she was loaded with phenytoin as she was in status epilepticus. She was already on MgSO4 and was monitored with continuous EEG. Status aborted within half to one hour.
Her MRI Brain was done which showed bilateral almost symmetrical hyperintensities predominantly in the subcortical white matter with some involvement of the overlying gray matter in the frontal, parietal and temporal lobes, most marked posteriorly within the temporal lobe medially. The changes are best seen on FLAIR images. These areas did not show any significant restriction of diffusion. After the administration of contrast, there was no abnormal enhancement within these areas. MRV sequences revealed normal flow in major dural sinuses, however, there was some paucity of cortical cerebral veins. Deep venous system was also within normal limits (Figure-2 [a]). 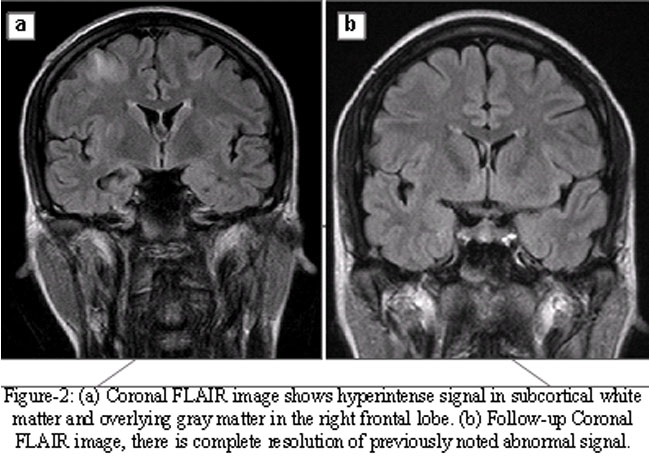 On follow-up MRI after 7 weeks, there was complete resolution of previously noted abnormal signals in both the frontal and parietal cortex (Figure-2 [b]). All these changes are suggestive of posterior reversible encephalopathy syndrome. The disappearance of abnormal signals with control of blood pressure was once again consistent with PRES. She was discharged in stable condition. Follow-up imaging also supported the resolution of abnormal signals.
Case-3:
A 24-year-old female, with history of pre-eclampsia in her first pregnancy which had resulted in C-section. She again developed pre-eclampsia in the 7th month of her 2nd pregnancy. In 37th week of pregnancy she developed severe headache for which she was taken to a local hospital where an emergency C-Section was done. That night she developed difficulty in comprehension and was not able to follow commands, talking irrelevantly, following which she became disoriented, and was hence brought to our emergency.
Her MRI Brain showed abnormal signal intensities in left thalamus and parieto occipital region associated with oedema and effacement of ipsilateral cortical sulci. Very minimal abnormal signal was also noted in right posterior parietal region. All these changes showed hypointense signal on T1-weighted and hyperintense signal on T2-weighted and FLAIR images (Figure-3 [a]). 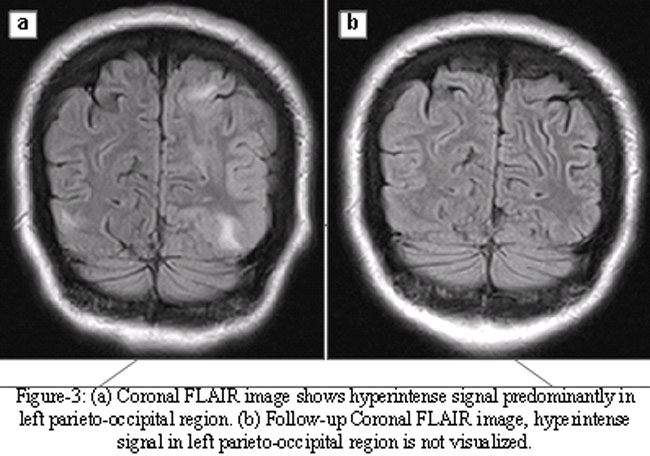 These areas did not show any significant restriction of diffusion. After the administration of contrast, there was minimal enhancement. MR Angiogram and MR Venogram were normal.
On follow-up MRI after 6 weeks, there was complete resolution of previously noted abnormal signals in left parieto-occipital and right posterior parietal region. However, there was redemonstration of minimal abnormal signal in left thalamus (Figure-3 [b]). All these changes were suggestive of posterior reversible leukoencephalopathy syndrome. On follow-up examination, patient showed marked improvement clinically with control of hypertension and was discharged in stable condition. The imaging also confirmed it.
The MRI changes in PRES translate into the clinical state as the increased capillary pressure due to hypertension related with eclampsia leading to abnormal signal in the posterior part of occipital lobes due to preferential loss of autoregulatory mechanism in posterior cerebral vessels. When the patient improved and the blood pressure was controlled, the increased capillary pressure also became normal and the associated abnormal signals due to associated oedema in the posterior lobes also returned to normal.

Rapid diagnosis of posterior reversible encephalopathy syndrome is essential to prevent complications such as infarction and haemorrhage. Proper diagnosis requires careful attention to the clinical and radiographic presentation. Pathogenesis of PRES has been suggested that there is a temporary failure of autoregulatory capabilities of the cerebral vessels, leading to hyperperfusion, a break down of the blood brain barrier and consequent vasogenic oedema.5
Characteristic lesion locations are parietal and occipital lobes, followed by the frontal lobes, the inferior temporal-occipital junction, and the cerebellum.6 Focal patchy areas of PRES vasogenic oedema may also be seen in the basal ganglia, brainstem and deep white matter, external/internal capsule.7 The basic PRES pattern resembles the brain watershed zones, with the cortex and subcortical and deep white matter involved to varying degrees.8 Three hemispheric pattern variants are holohemispheric, superior frontal sulcus and primary parietal-occipital.9 These demarcate lateral hemispheric blood supply (middle cerebral artery MCA) and medial hemispheric supply (anterior cerebral artery ACA), posterior cerebral artery PCA and further reflect the junctional/watershed nature of PRES.
Acute cases of PRES have highly characteristic MRI features, however sometime atypical imaging findings can be misleading. On CT SCAN, abnormalities are seen as symmetric, bilateral areas of low attenuation of white matter.10 On MRI, T1-weighted images show hypointense and hyperintense areas on T2-weighted images.10 The typical imaging findings of PRES are most apparent as hyperintensity on FLAIR images in the parieto-occipital and posterior frontal cortical and subcortical white matter, less commonly brain stem, basal ganglia and cerebellum are involved. Atypical imaging appearances include contrast enhancement, haemorrhage and restricted diffusion on MRI.11 Follow-up MRI after appropriate therapy for the cause of PRES shows resolution of the lesions, unless the condition progresses to infarction or haemorrhage. PRES lesions involving the occipital lobe spare the calcarine and paramedian occipital lobe. This feature, along with the predominant involvement of white matter helps to distinguish this syndrome from bilateral infarctions of the posterior cerebral artery.2 Though the lesions in PRES predominate in the territories supplied by the posterior circulation, other areas of the brain like the frontal, temporal lobes, cerebellum, thalamus and brainstem may also be involved.12 When regions of the brain other than the parieto-occipital lobes are predominantly involved, the syndrome can be called atypical. In such cases, a diffusion weighted MRI with ADC mapping shows increased ADC values representing vasogenic oedema in these areas, thus differentiating atypical PRES from other brain disorders.13 Magnetic resonance angiography using 3D Time of flight (TOF) technique, reversible"vasculopathy" (diffuse/focal vasoconstriction) or vessel prunning is noted.3 Magnetic resonance venography has tended to be normal. On Proton MR Spectroscopy reduced N-acetylaspartate:choline and N-acetylaspartate:creatinine ratios have been described in regions of PRES vasogenic oedema.14 The diagnosis of PRES could only be confirmed in our patients by resolution of the changes on follow-up imaging. Decreased perfusion has been noted on both brain single-photon emission CT technetium Tc 99m hexamethylpropyleneamine oxime imaging and by MR perfusion.15
Histologic evaluation of PRES is uncommon and often obtained late in the course of complex systemic disease.1 Though the changes in a typical case of PRES are reversible, it can progress to various complications like ischaemia, cerebral infarction and even death.7
The differential diagnosis of PRES includes various acute neurologic conditions including ischaemic stroke.10
A study of 76 patients by Alexander M. McKinney et al, showed that the incidence of regions involvement was parieto-occipital 98.7%, temporal 68.4%, thalamus 30.3%, cerebellum 34.2%, brainstem 18.4%, and basal ganglia 11.8%. The incidence of less common manifestations was enhancement 37.7%, restricted diffusion 17.3%, haemorrhage 17.1% and a newly described unilateral variant 2.6%.16
W. S. Bartynski et al, described vasogenic oedema in parietal or occipital regions 98%, frontal lobes 68%, inferior temporal lobes 40%, cerebellar hemispheres 30%, basal ganglia 14%, brainstem 13%, deep white matter 18% and splenium 10%. Three major patterns of PRES were noted: the holohemispheric watershed 23%, superior frontal sulcal 27%, parietal occipital 22%, with additional common partial or asymmetric expression of these primary PRES patterns 28%.9

We have presented the case series of young females with eclampsia who developed recurrent seizures. This case series highlights the need to expect neurological events in patients with PRES. Awareness of the diverse clinical and radiographic presentation of acute PRES is essential to avoid misdiagnosis and treatment delay. It is imperative that the syndrome of PRES is correctly recognized on neuro-imaging, as the condition is reversible and potential complications can be avoided with appropriate therapy.

Paraplegia in a patient on warfarin treatment