Lipoprotein (a) and Glycaemic control in Pakistani Subjects with Diabetes Mellitus

Aims: To measure lipoprotein (Lp)(a) levels in people with diabetes mellitus (DM) and to see if there is any difference in Lp(a) levels between diabetics with good glycaemic control and those with poor glycaemic control.
Methods: Sixty subjects with DM and thirty healthy individuals were studied. Fasting blood samples were analyzed for glucose, glycosylated hemoglobin, Serum total cholesterol, triglycerides, low density lipoproteins, high density lipoproteins and Lp(a).
Results: A non significant difference was found between the lipid profile of normal individuals and subjects with DM with a good glycemic control. Lp(a) levels were significantly raised in diabetics. The difference in Lp(a) levels between well controlled and poorly controlled diabetics was non significant. In the control group 23.4% of individuals had high risk levels of Lp(a) while it was 46.7 % for people with DM. -
Conclusion: Glycaemic control improves lipid profile positively in diabetics and may even lead to near normalization of lipoprotein concentrations. Diabetics have elevated levels of Lp(a) and the difference in Lp(a) levels between well controlled and poorly controlled diabeticsts is non-significant (JPMA 53:54;2003).

Among the most common chronic disorders of modern time, diabetes mellitus (DM) remains unique because of its multisystem ramifications. DM is the most common cause of secondary dyslipidemias. People with DM have 2-4 fold increase in the risk of developing cardiovascular disease. The major risk factors in DM are hyperglycaemia, dyslipidemias and hypertension. Diabetic dyslipidemia is characterized by elevated levels of very low density lipoproteins (VLDL), low density lipoproteins (LDL) and lower levels of high density lipoproteins (HDL). Atherogenic dyslipidemia in diabetic patients is often called diabetic dyslipidemia or lipid triad.’ An issue of considerable interest is the relative contribution of each component of atherogenic dyslipidemia to coronary artery disease (CAD) risk. Growing evidence suggests that all the components of lipid triad are independently atherogenic.2
Epidemiologic studies have shown that an increased risk exists in diabetics, even when total plasma cholesterol, HDL, arterial pressure and smoking are corrected . The explanation for the excess macrovascular complications is not yet readily apparent. There are different views regarding these complications in DM like qualitative abnormalities in plasma proteins, hyperinsulinemia, platelet abnormalities and impairment in coagulation system.3
Despite intense research in the field of risk factors for coronary heart disease (CHD) and other thromboembolic disorders it is yet difficult to define the independent contribution of several interrelated abnormalities in lipoproteins to atherogenesis. For example the association between LDL levels and CHD is well accepted but yet a relatively high proportion of cases with CHD have LDL in the normal range.4 Beyond the lipid parameters provided by the lipoprotein profile, several additional components of the lipoprotein system have been identified and are under evaluation. Some of the more important of these include apo B, apo Al, HDL subclasses, small dense LDL particles, remnants of chylomicrons & VLDL, IDL and Lp (a). At present, the knowledge is insufficient to recommend that they may be used in routine clinical practice.5.6 Because accurate and reliable measurements of these various fractions are not widely available and because we lack definitive data showing .their contributory role as risk factors for CHD more research is required to determine their clinical usefulness. In the coming years a new member may be added to atherogenic dyslipidemias and that is lipoprotein (a). Lp (a) has now been identified as an independent risk factor for premature CAD and aggravates the atherogenic effect of diabetes mellitus.7
Lipoprotein (a) p (a)] was first identified by Kare Berg in 1963 as an LDL variant.8 It is formed by an LDL moiety and a unique protein, apolipoprotein (a) po (a)], linked to apolipoprotein B- 100 po-B 100] of LDL.5 The structural gene for Apo (a) is located on chromosome number 6 with the gene for plasminogen, giving a clue that both may have arisen from a common ancestral gene.9 The most intriguing feature of Apo (a) is that it shares an extensive structural homology with plasminogen, a key proenzyme of the fibrinolytic cascade. Kringle V and the protease domain of Apo (a) share >85% amino acid identity with the corresponding plasminogen domains, even though the protease domain of Apo (a) does not appear to have a catalytic function.5
Lp (a) is believed to contribute to lipid induced atherogenesis similar to LDL particles.10 Within a population the plasma levels can vary from less than 0.5 mg/dl to over 200 mg/dl.” The cutoff Lp (a) value to classify subjects as being at increased risk for CAD varies greatly among studies and ranges from 20 to 40 mg/dl. Given the uncertainty related to Lp (a) cutoff value, it has been suggested that clinicians use a conservative Lp(a) value of 30 mg/dl, particularly in patients with concomitantly elevated LDL cholesterol.12,13
The purpose of the present study was to measure Lp(a) levels in patients with DM and to see that whether there is any difference in Lp (a) levels between diabetics with good glycaemic control and poor glycamic control.

This cross sectional study was carried out at the Chemical Pathology, Department of Armed Forces Institute of Pathology (AFIP), Rawalpindi. Sixty subjects with Diabetes Mellitus (DM) and thirty healthy individuals were studied. Fifty three of these were of type 2 DM and seven were type 1 DM.
The individuals participating in the study were diagnosed cases of DM based on the criteria proposed by American Diabetes Association.14 Diagnosis of DM was carried out by either two fasting plasma gluqose (FPG) levels >7.0 mmol/l (126 mg/dl) on two different occasions or one FPG >7.0 mmol/l plus one random blood glucose >11.1 mmolIl (199 mg/dl). Subjects were included in the study voluntarily after they signed the consent Performa. They were allotted study numbers. Thirty four were males and twenty six females. Their height was measured in centimeters and weight in kilograms. BMI was calculated by the following formula: BMI = Body Weight in Kilograms / Height (square meters) History and clinical examination was recorded on a separate Performa. All the subjects were in stable metabolic condition. History was taken regarding any disease that could affect the metabolic status of the body like nephrotic syndrome, acute or chronic renal failure, thyroid disorders, acute infections, diabetic ketoacidosis and non ketotic hyperosmolar diabetes.15.16 Any person having a positive history of the above mentioned disorders were excluded from the study. Those giving a history of familial hypercholesterolemia, ischaemic heart disease or myocardial infarction were also excluded from the study.17,18 The history of medication was recorded and those taking lipid lowering agents, oral contraceptives and steroids were also19,20
Blood pressure (SBP/DBP) was recorded in sitting position in the right arm as mmHg, by mercurial sphygmomanometer. Pulse and respiratory rate per minute and temperature were also recorded. In general physical examination any finding relevant to hyperlipidemias like xanthomas or xanthelasma were noted.
The percentage of glycosylated haemoglobin (HbAlc) was taken as the marker of glycaemic control.21 The subjects were divided into two groups on the basis of glycaemic control into good glycaemic control (HbAlc <7.5%) and poor glycaemic control (HbAlc _ 7.5%).
The subjects included in the control group were healthy individuals with mean age of 44.6 years. They were not suffering from any acute infection or any metabolic or psychological disorder. They had no family history of hypercholesterolemias or DM. They had normal lipid profile and fasting blood glucose level less than 6.1 mmol/l (110 mg/dl). All the tests were run in duplicate and the average of the two readings was taken as the final result.
Glucose was estimated by GOD-PAP (Glucose Oxidase Phenyl Ampyrone) method, an enzymatic colorimetric method with the kit supplied by Linear Chemicals (Cat No.GL-5083). Total Cholesterol was measured by CHOD-PAP (Cholesterol Oxidase Phenol Ampyrone), an enzymatic colorimetric method, using kits of Linear Chemicals, Spain (Cat No. CH 5054). The instrument used was Selecta 2 autoanalyzer as for glucose. GPO-PAP (Glycerol Phosphate Oxidase), an enzymatic colorimetric method was used for serum triglycerides estimation. The kit was supplied by Linear chemicals (Cat No TR 5046). The instrument used was Selectra 2 autoanalyzer as for glucose. CHOD - PAP Method was used for HDL-C estimation with the kit was supplied by Merck Systems (Cat No;28248). CHOD PAP, an enzymatic colorimetric method was used for LDL-C estimation using kits of Merck System (Cat No 28248). Lp (a) was estimated by enzyme linked immunoabsorbant assay.The kit used was supplied by Innogenetics Biotechnology for Health Care, Belgium (Cat. No. 000703A). Ion exchange resin separation method was used for estimation of Glycosylated Haemoglobin.The kit was supplied by Stanbio Glycohemoglobin (Pre-Fil).
The data was analyzed by computer program “Microsoft Excel” and Statistical Package for Social Sciences (SPSS). The tests applied for statistical analysis were Student’s t test and a p value _..0.05 was taken as significant.

Sixty subjects with diabetes mellitus (DM) and thirty healthy individuals participated in this study. Fifty three were of type 2 DM and seven were of type 1 DM. The diabetics were divided into Group A and B on the basis of glycaemic control. Group A consisted of diabetics with good glycaemic control (HbAlc < 7.5%) and group B with poor glycaemic control (HbAlc _7.5 %). Group C was healthy control group. Each group consisted of 30 subjects. In group A 18 were males and 12 females. In group B, 17 were males and 13 females. Group C consisted of 16 males and 14 females.
The clinical characteristics and glycemic status of subjects in group A, B and C are summarized in table 1. 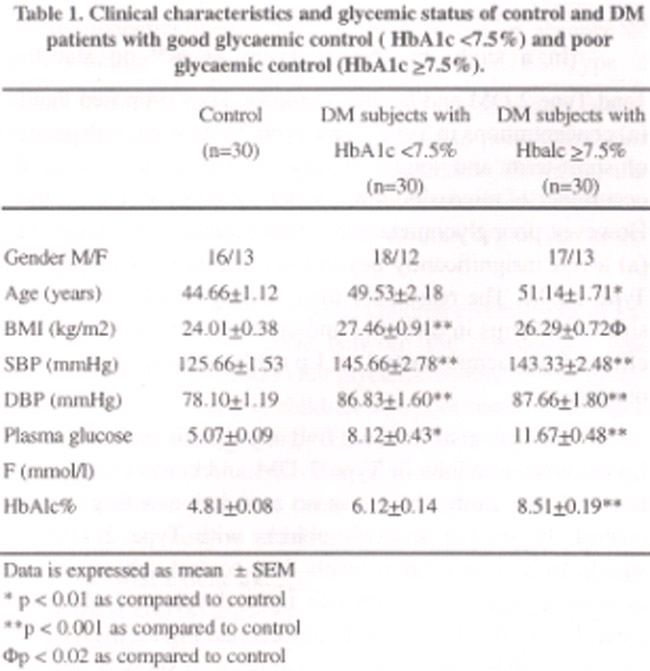 Prevalence of Anxiety and Depression among Medical Students of Private University